As mentioned in my last blog, Pepe has developed a rear end noise which I can’t locate. The basic sound is not getting louder but I seem to think it is a wheel bearing or a tire problem. The tire shop suggested I have the rear tire balanced as it has a Halibrand wheel with taped on weights which look loose. I have the car up on jack stands to removed the tire and check the wheel bearings at the same time. Don’t just love these old Fords! The tire is not a difficult job and hopefully that is the culprit. Checking the wheel bearings is more difficult and messy but while I am under there, I just as well check everything out as the summer driving season is coming real soon. Walt mentioned that sometimes the Currie housings are not aligned perfectly and that causes the bearings to fail prematurely. I have never had a wheel bearing go bad so this will be a new experience. I have a fresh 57 Ford nine inch (smooth back) that could be installed and it has not been narrowedâ€¦more work but not that much. The rear suspension hasn’t been painted and detailed for many years so now may be the time. Lets hope the tire is the problem.

We discussed going to the “March Meet” in Bakersfield at lunch today. Most felt it is worth while and includes a good swap meet. We can be there in about 90 minutes so that’s the plan for now. I hear they have a good show scheduled and some great racing to watch. We also decided that we need the golf cart as the walking can be extensive at Famoso Raceway. I haven’t attended the event since Goodguys was the promoter. I have attended the Hot Rod Reunion each year but always by-passed the “March Meet” due to some conflict which I no longer have. The dates are March 6-9.

I spent yesterday cleaning Pepe after the long trip and now have all the bugs, grime and dirt removed. The wheels were the hardest to clean as the aluminum was dull and water spotted. CCC Golden Shine did the trick and they are standing tall for the next trip down the wonderful freeways we have in LA. I am thinking a set of steelies might be in order this year, especially if the tires need replaced. Yes, an old Hot Rod needs love too. 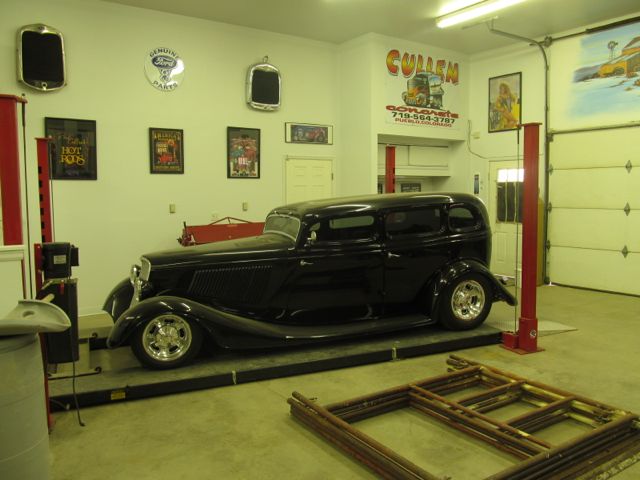 Yes, mor-doors make beautiful hot rods as shown in this photo from Phil in CO. Maybe it’s the lens but the front end looks stretched a bit. Heavy chop and perfect stance combined with polished mags make my mouth water. 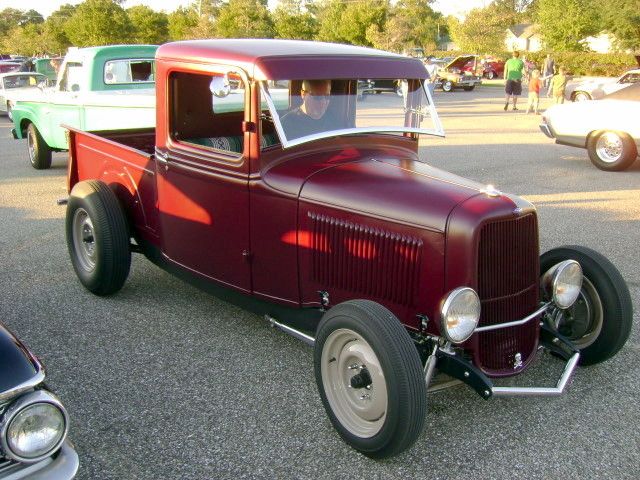 How about a nice 34 hiboy truck for your next project. I know where some are stored in a chicken coop. 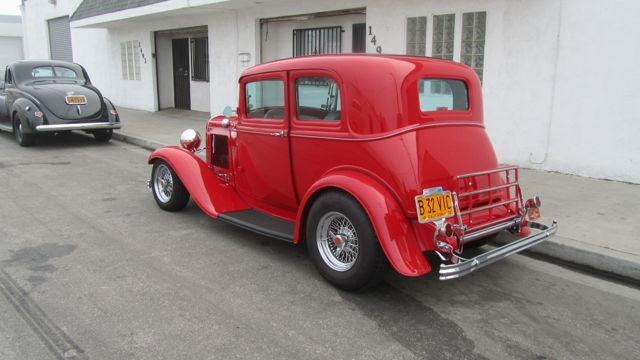 One of Henry’s best was in attendance on our venture to Pechanga. The stately Victoria is always a crowd pleaser. Zenith wire wheels, luggage rack, cowl lights all indicate a 70’s build to me as that was the best you could have in those days. 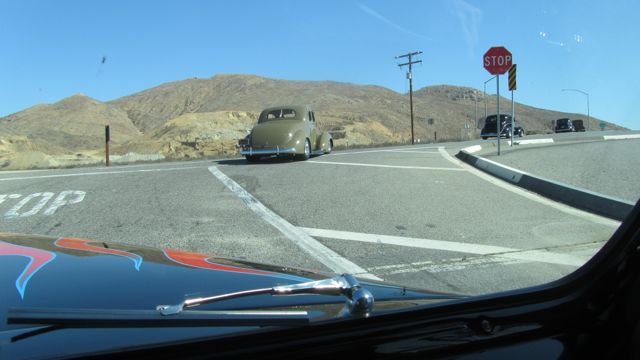 Ryan’s beautiful 37 is very low and was a sight to see going down the highway. I rate his car as one of the best 37’s around. His exhaust has a tremendous deep throaty sound. 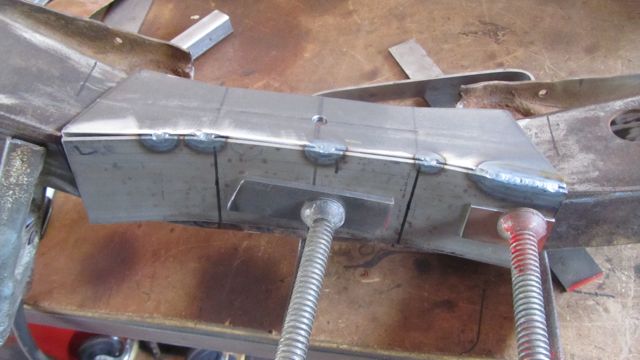 I have been working on Mr. Bill’s front crossmember and so far so good. I had to remake the complete center section as it was really trashed. 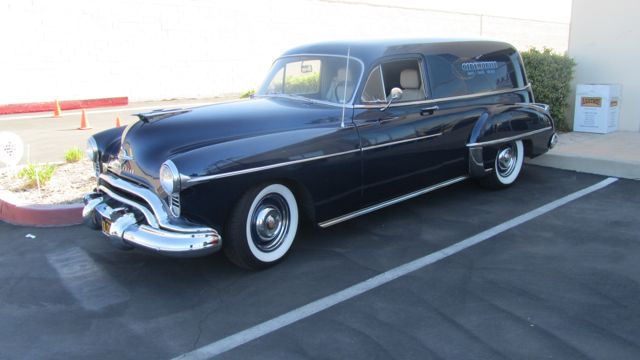 I have not seen an Oldsmobile sedan delivery before and this one was very nicely done. Mostly stock on the outside and I didn’t see under the hood but the stance Â had been lowered and the blue paint looked recent. 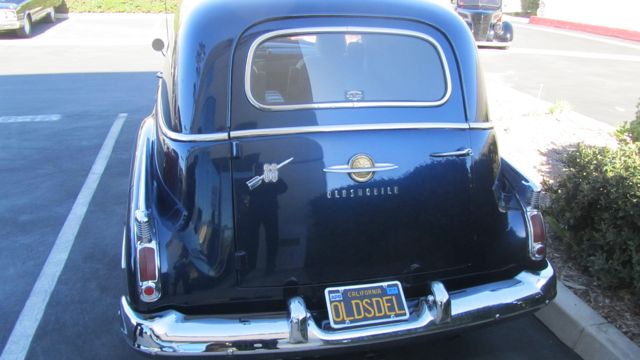 The rear door with the 88 and Oldsmobile emblem looked right at home along with the special rear bumper. 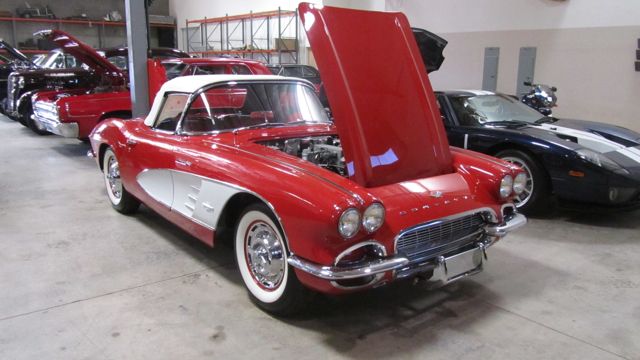 I have a soft spot for 1961 red and white FI Corvettes as my first Corvette was a red and white 1959 model with dual quads. I couldn’t afford the FI upgrade in 61 and settled for a base motor three speed. I added the four speed plate on the shifter which made my dad mad and confused my girlfriend. 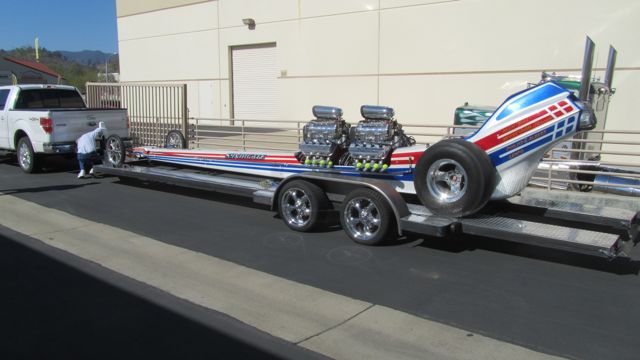 We didn’t stay long enough to hear this one run but I’m sure it had a mega sound with those two Hemi’s. 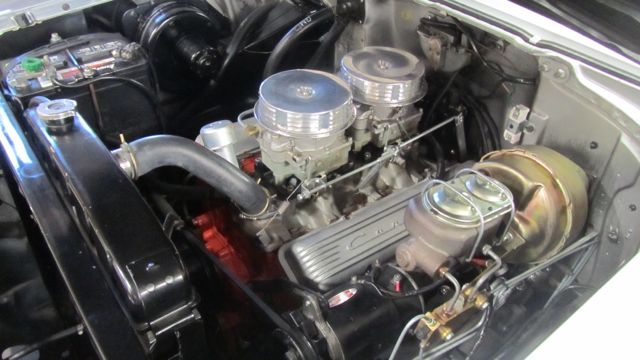 This is the engine in the late Wally Arnold’s 57 Chevy handyman which towed his 38 Chevy to the races. Dual Quads with Corvette air cleaners was the look to have in 1957. These are real pricey set ups today. 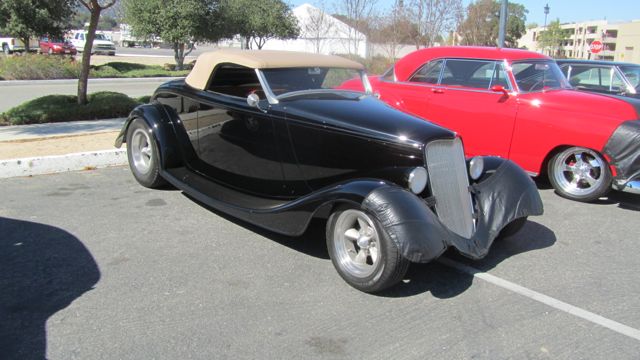 A Speed 33 makes a nice roadster with roll up windows. Smoothed out and finished in a jet black with a Camel leather interior made it a standout.

The rear was all smooth including the Greening tail lights. The 5 spokes gave it a little Hot Rod flavor.

Morning Coffee at the “Office” 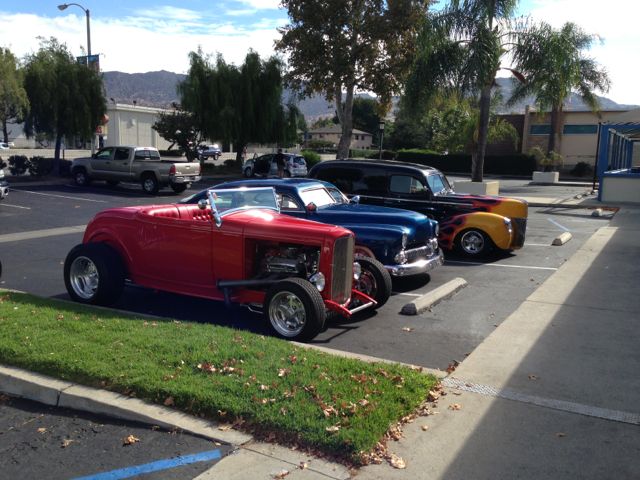 Winters are not so severe in LA and you can drive your roadster almost everyday if you want. Bob-O drives a different hot rod everyday.