If you have been around for a long time, then you will enjoy seeing Jerry Moreland’s 40 sedan that was deemed the “Worlds Fastest 40 Street Rod.” Â The showdown between Fat Jack and Jerry at the Baylands Raceway in Fremont will be remembered forever as the “Fat Attack!” Both cars featured big block Chevrolet engines built to the max. Jacks 46 Ford coupe rolled and was totaled during the race. He started to build a sedan delivery to go racing but business kept him busy. He still has the car so you never know what to expect out of Jack. Fat cars were in and soon parts from Jack, Pete & Jake and SAC were being consumed in large quantities by enthusiasts who wanted to build some “Fat Attack” Hot Rods. I jumped on board and had Jack build me a chassis for my sedan I had just purchased from Don Thelan. I was not a racer but loved the 40 sedan for the family. I even built a 46 Ford sedan delivery to drive around to the swap meets and to the beach with my son. I will be eager to see this car run again. Maybe Jack will have his delivery ready to go and we could see the “Fat Attack” all over again. Thanks Scott for the photos of you and your father’s new sedan.

Racing is still part of Hot Rodder’s life. Most of us drifted away from actual racing as the cost is prohibitive for most budgets. But we can still go to Pomona/Bakersfield and see some real racing done by the professionals. I still get the urge to squeal the tires in all four gears â€” don’t you! 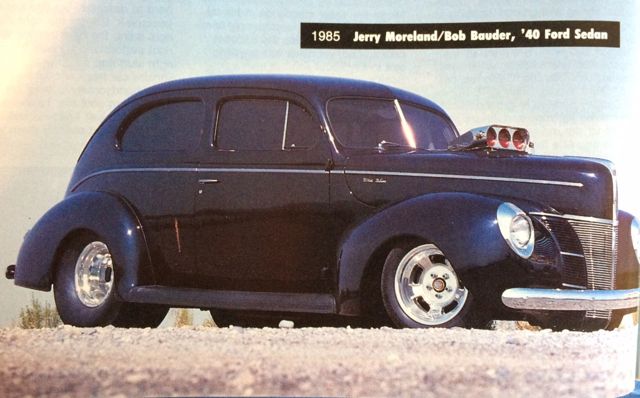 You probably remember this famous 40 sedan from the past. SRM called it Project 40 and did a build series on the build. 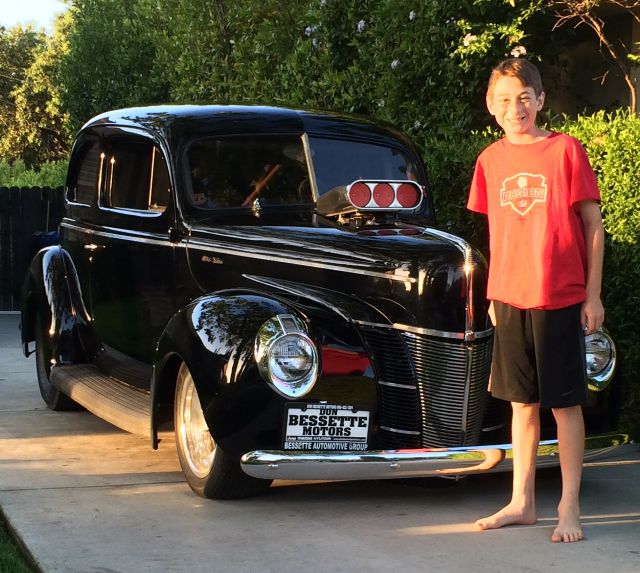 Scott and his Dad went in together and purchased the famous 40 and Scott’s son is showing his approval on the day it was delivered. 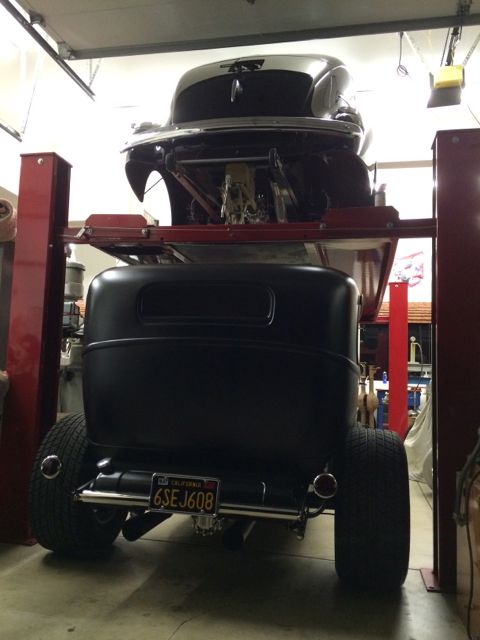 Here are both sedans parked in Gary’s garage. Deuces and Forties go together like Love and Marriage. 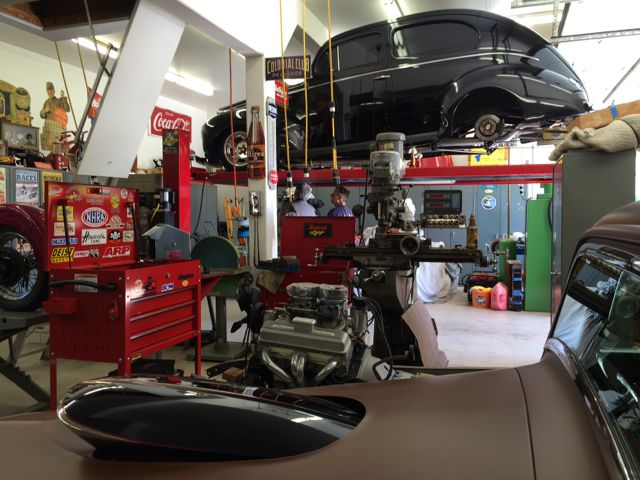 That is Pete and Gary giving it the once over to see what is required for the refurbishing. Gary’s coupe is in the foreground. 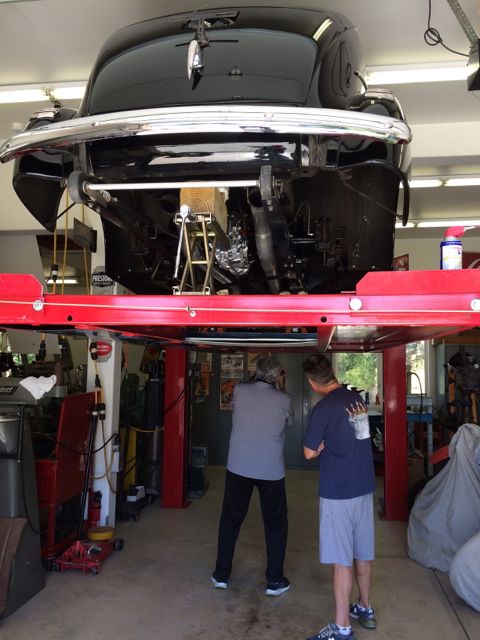 The Halibrand stands out with its polished case. Pete is taking photos. 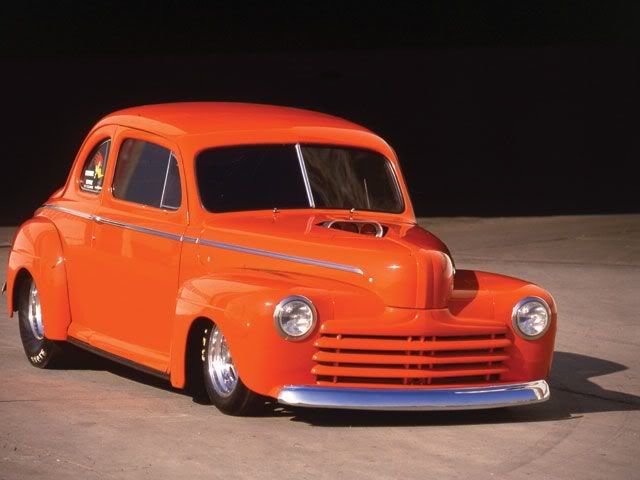 Here is Jack’s 46 that was involved in that match. See YouTube for some video’s of the race in Fremont. 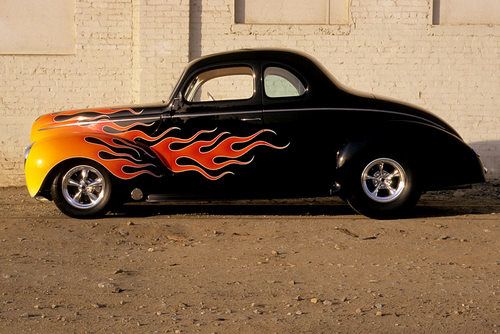 SO-CAL built Chuck a fast 40 coupe but I don’t think he raced it. 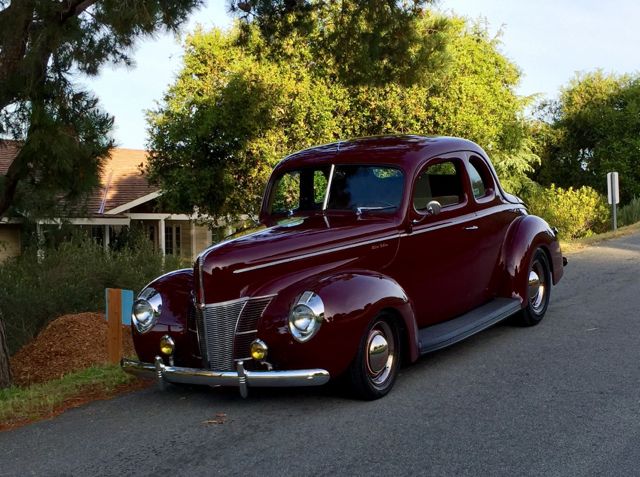 I fell in love with this Maroon 40 coupe the minute I saw it. Perfect stance, steelies with caps and rings is all you need to complete a 40. When you open the hood you will find something you don’t see much of today. A late Chevrolet big box fuel injection. 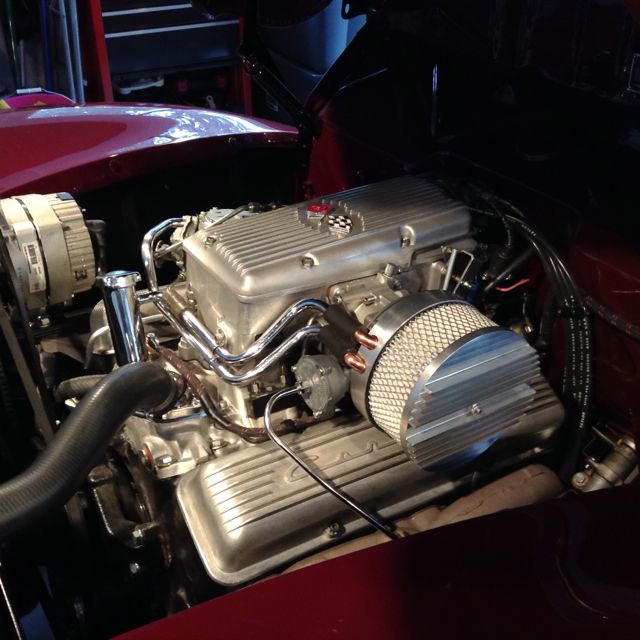 I love the looks of the 63-65 fuel injection unit. I had lots of trouble with the one on Nick’s 3-window but it looked good. I bet Gary and Tim had something to do with the selection. 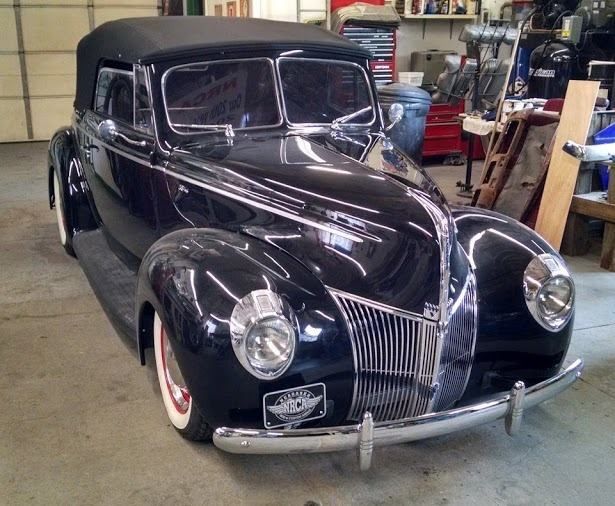 You don’t see many standard convertibles but they do look good. 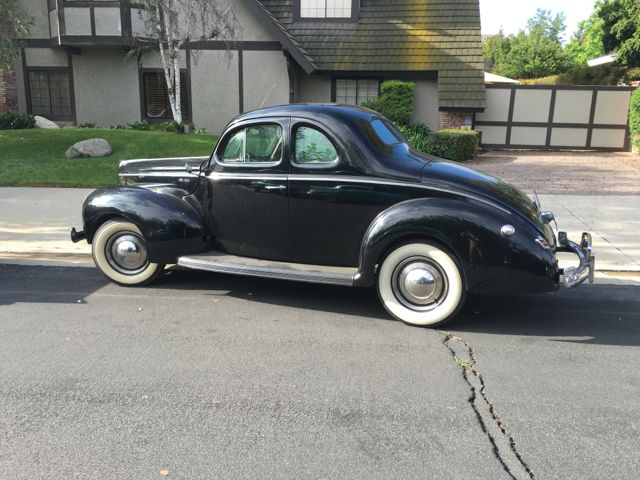 Forty Larry has this original coupe in his collection. A long time Valley car that is bone stock. 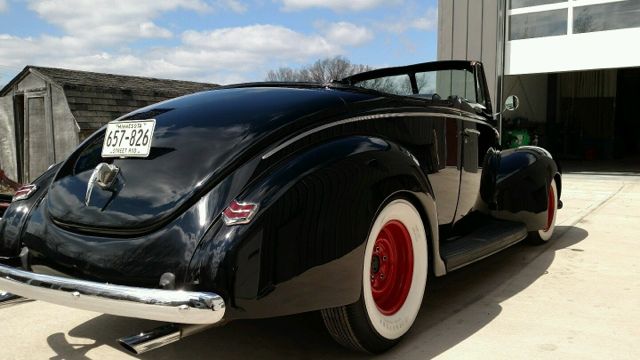 A nice photo of the 40 rag with the top down and a nice stance. 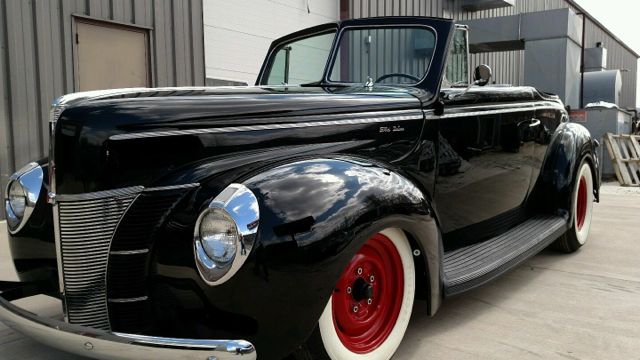 The fender covering the whitewall is what Fat Jack and Ryan Reed have in their “Trick Bag!” 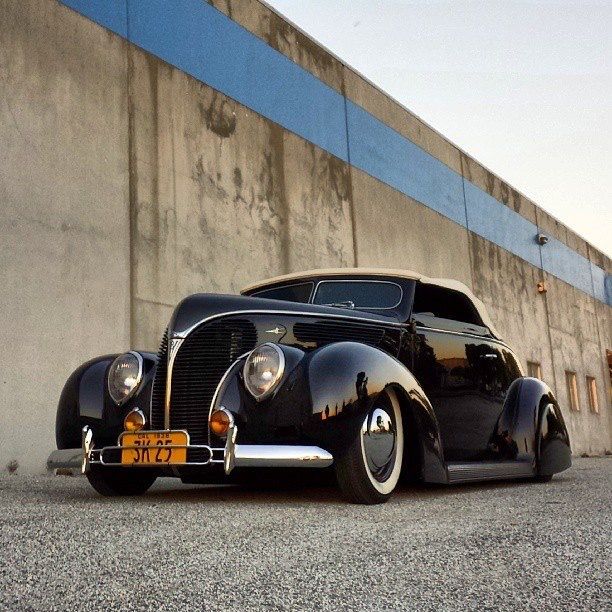 Seldom seen looking this good is the 38 Ford rag. Build something different and be cool. 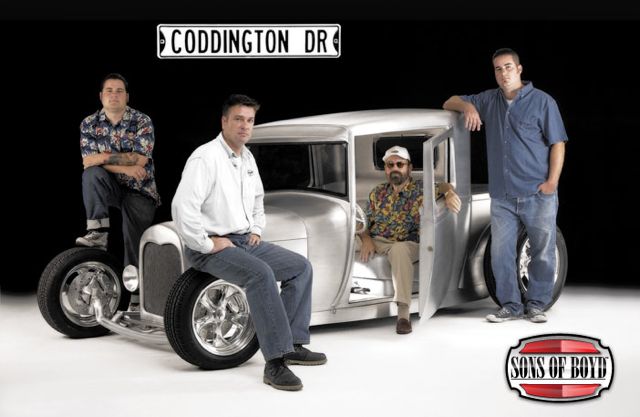 The Boyd Boys â€” I miss Boyd and his talent for something different. Chris is caring the torch now. 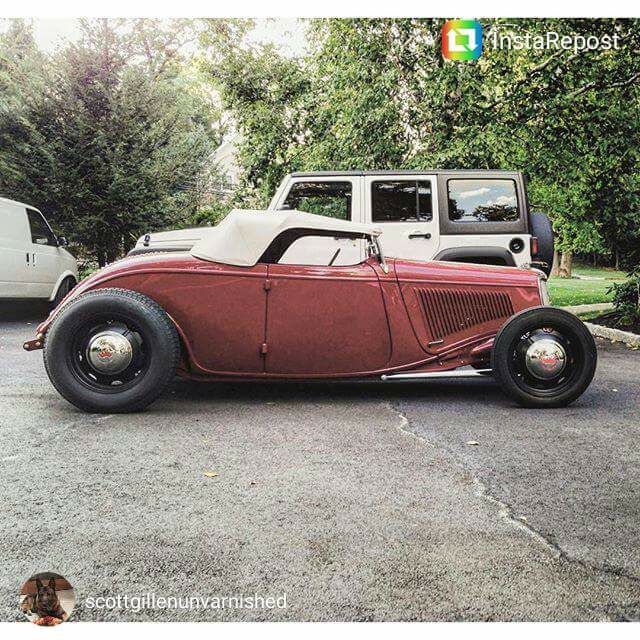 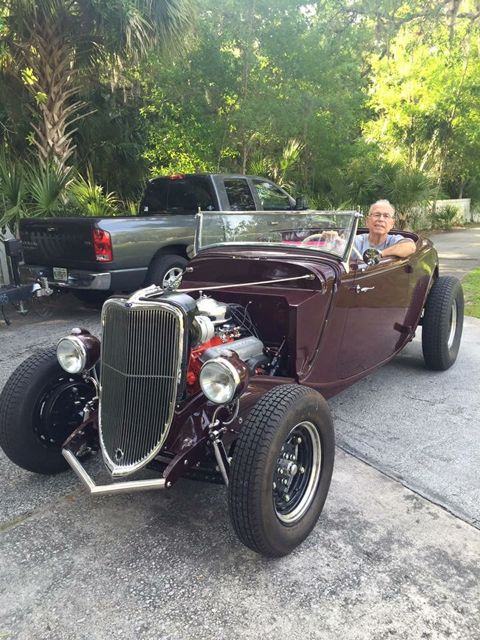 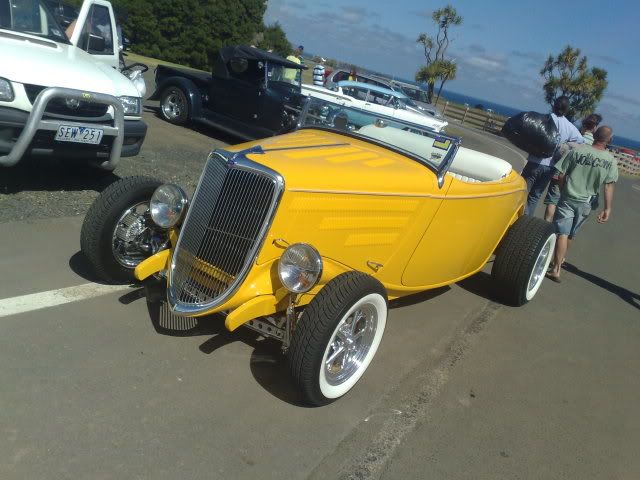 Yellow 34 hiboy at the beach.