The morning started off early with a phone call from Tom who wanted me to come over and look at his quickchange. Â He was having trouble removing the pinion from his new V8 case. Â It seems someone had installed the pinion that was too tight and would Â not turn. Â I looked up my Halibrand information and told him how to remove the pinion by heating it carefully with a torch being careful not to heat the shaft which would expand in the bearings. Â I love quickchanges but they can be difficult to assemble or disassemble if you are not careful.

My next stop was at Bob’s to see how he was coming on the disassembly of his new 40 sedan. Â He also wanted me to locate the serial number for him. Â We sanded off the surface rust and located the number. The person on the line who stamped the VIN double stamped the 8 and made the number wrong for a 1940 but the title had the same number so he was O.K. Â I used to work on the line in Pontiac and was responsible for the chassis line during my youth. Â We often double stamped the VIN as the stamp would bounce or slip sometimes. Â Assembly lines goofs are very common even in today’s hi-tech world. Â The sedan is even nicer than we thought after removing all of the fenders and interior. Â Bob is going to have a very nice sedan when completed.

I am working on Andre this week and hope to complete the installation of the rear axle. Â I have too many projects but I enjoy the journey more than the final destination. 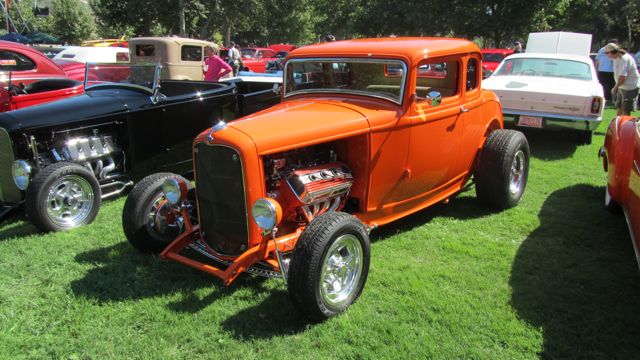 Chuck had his new 5 window on the grass for all of us to see. Â The Hemi is a nice touch for a change. 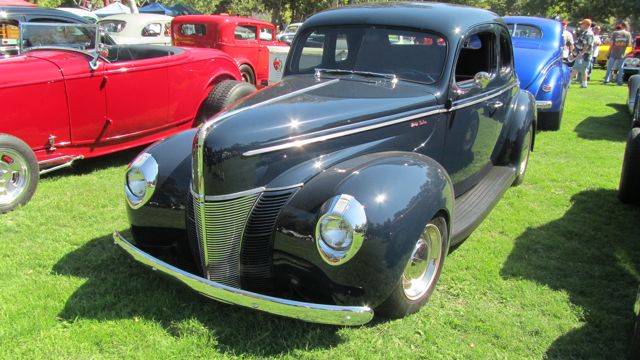 Tom drove his coupe and left his Woody at home today. Â He loves this little coupe and drives it everywhere. 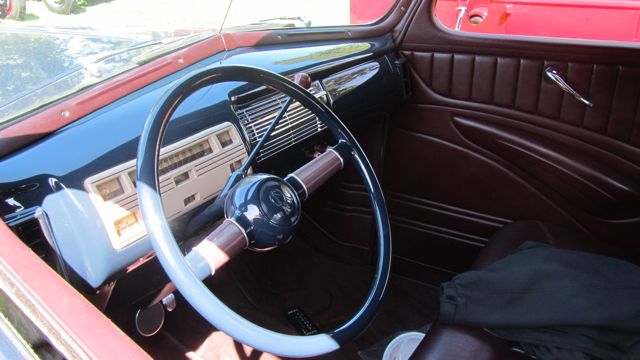 Frantic installed the stock column and dash panel to Tom’s coupe. Â Gabe did the interior and it is very nice. 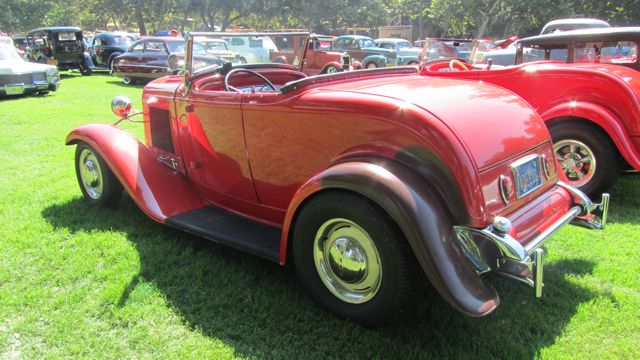 Gray’s roadster showed up and looked just like it has for many years. 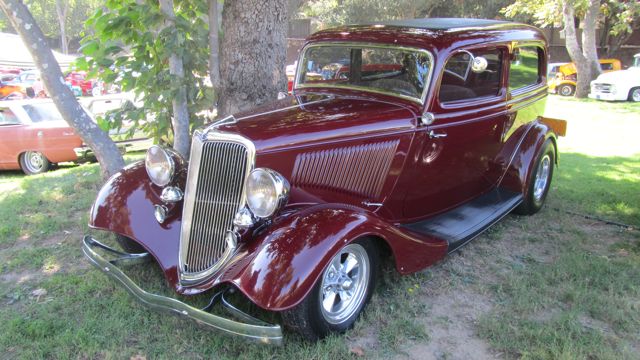 Reed’s 34 is one of my favorite model 40 sedans. Â I don’t know who owns it and could not find the owner at the show but it still looks good. Â I watched him build this car in his small garage in Stanton. 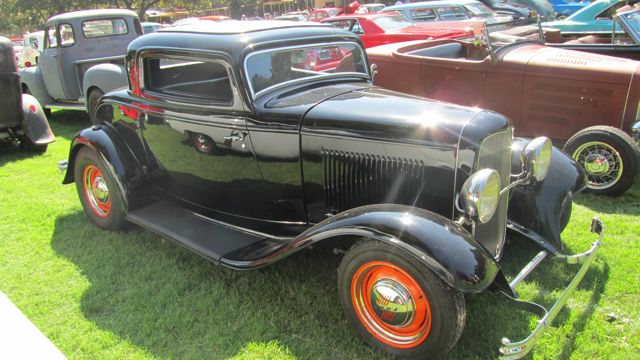 Chopped three windows were everywhere at the Outriders show. Â Orange wheels and a super straight body made me take another look. 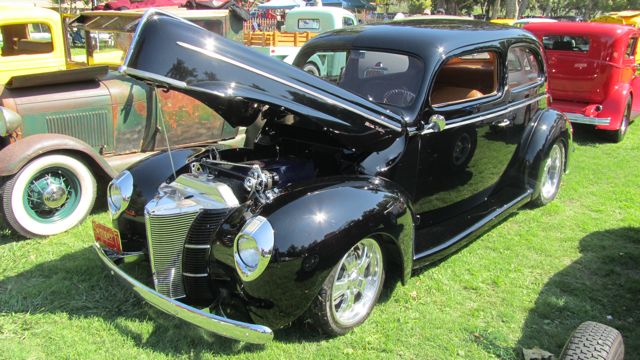 Black 40 sedans like this one are not common. Â A high end build with all the comforts you would ever need. Â A little hi-tech but very nice. 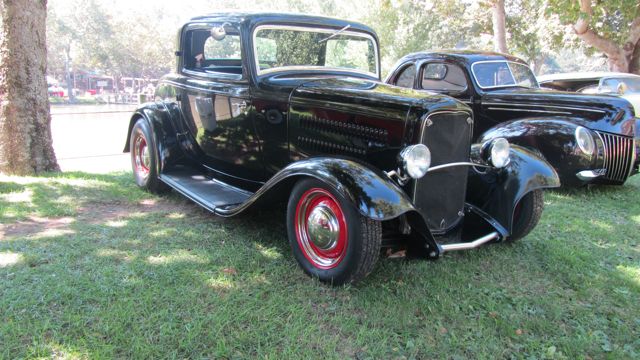 Next to Ruby was this super nice old time coupe with a solid axle. Â I can a look at this style all day long. 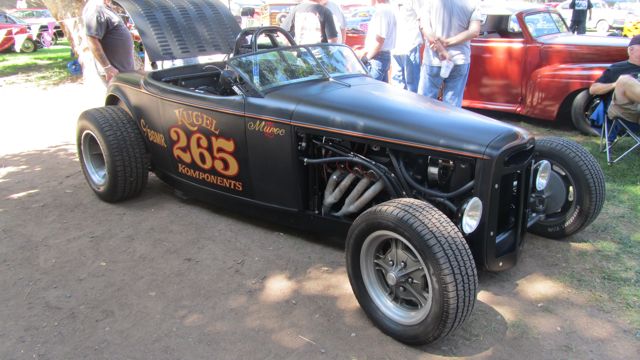 Jerry drove his B’ville roadster to the picnic and the car is an impressive build. Â Long time Salt lover he continues to build winners for the trails. 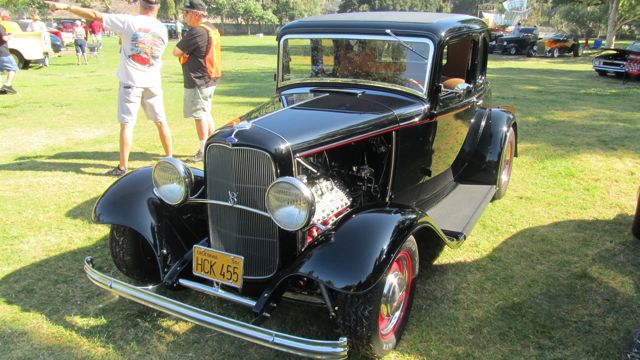 Steve wanted to see some more of Wayne’s super 5 window with the flathead mill. Â This car sets the example for an early build with class. 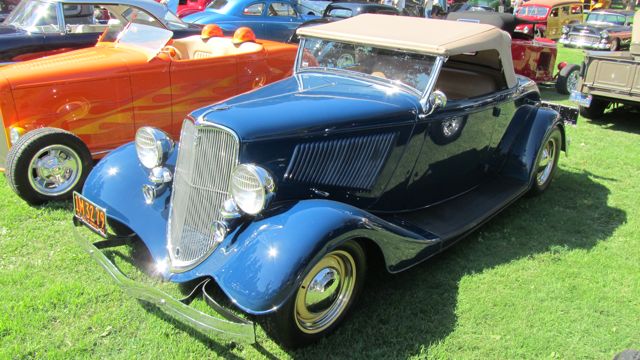 I did not meet Tom but he drove his very classy 33 roadster to show and I took this photo from the hill.