After an early morning Doctor’s appointment, I stopped by the “Office” to see the staff. Â Fred has his new 55 Chevy an “American Graffiti” style gasser parked in the front and there was a crowd of people checking out his latest creation. Â Fred is a local Hot Rod builder who can do it all. Â The car had a great sounding engine and a drag strip lope that made my heart beat a little faster. Â I think later cars are replacing the early Fords in many people eyes. Â I have never changed my love but I am on the older side of the staff. Â I am still chasing projects that I could never complete and that is o.k. Â I am happy to have projects to sit and admire but I don’t think much about ever finishing them.

The big event of the day was Don turned 81 and was talking about going home and changing the center crossmember in his Deuce roadster. Â He is my hero and I hope I can still carry the torch for many more years. Â Happy B’day Don!

The balance of the week is going to be really hot so I am not sure how much work I will accomplish on Lucy but I am doing what I can to have the engine ready to install on Saturday. Â Freeing up some space in the garage makes it easier to move around and do some work on Andre. Â My recent focus is beginning to amaze me. Â If I can accomplish one task each day I will be making progress and feeling good about the day. 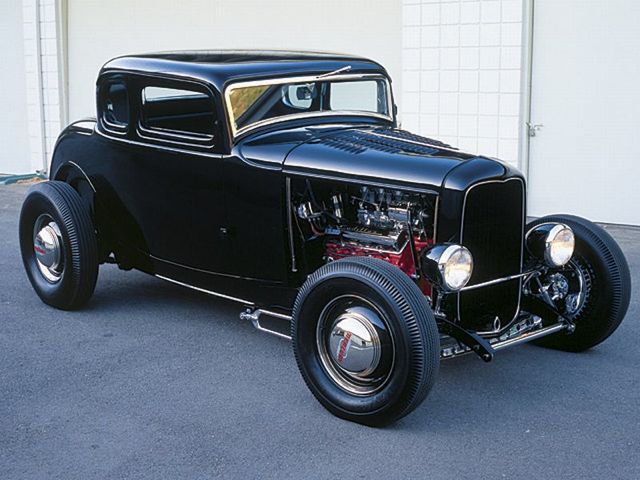 The bar was set high on the Jim Busby Deuce 5 window with the Cadillac motor. Â I have been all over this car looking at the details of an early build. Â This is the one to look up to if you like 5 windows. 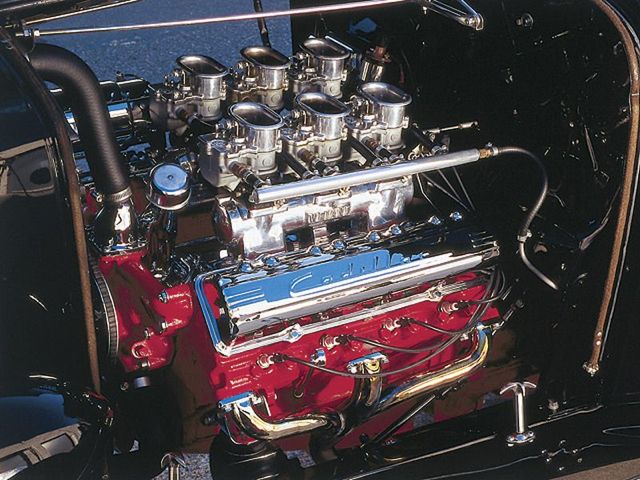 I don’t know anything about Cadillac engines but I like the look of this well detailed unit. Â The 6 2’s would make Bob O happy. Â I am guessing this is a 331 49-52 vintage. 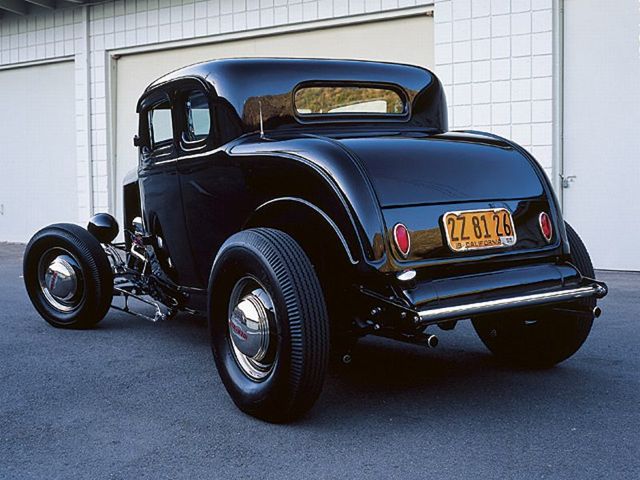 The heavy chop and drooping front hairpins were the look at the time. Â The parallel rear leafs were not popular in my era. Â Would you stop and take a closer look? Â Yup! 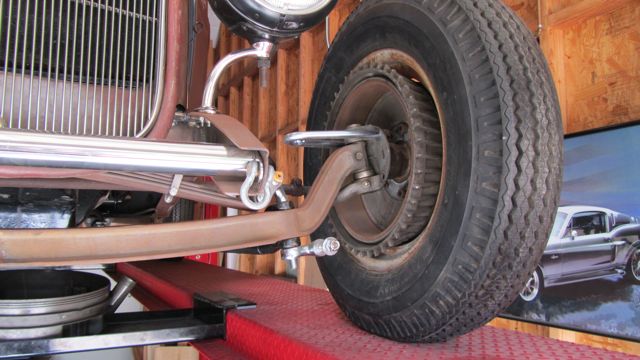 Here is the front axle on the sedan I looked at yesterday. Â Perfect drop with no thinning of the web. Â The Buick drums will receive F 250 backing plates. 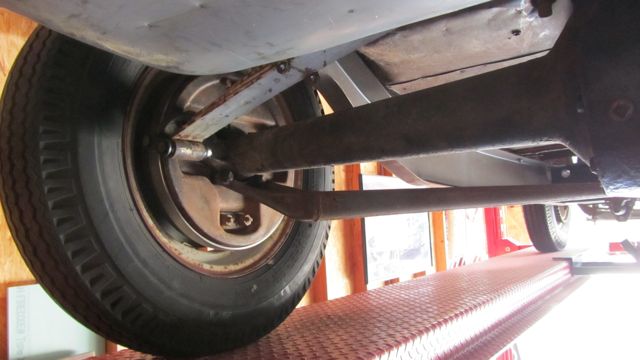 The rear suspension has a stock crossmember that has been reworked for a 40 spring. Â The stock 40 rear end has had new drums and wheel cylinders added. Â Note the frame is not boxed. Â Simplicity at its best. Â Do you need anymore? 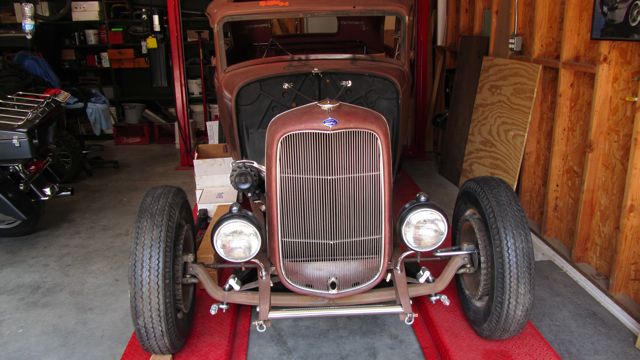 Down on the ground the Deuce hiboy sedan looks like an early hot rod. Â A generator hangs off the 331 Cadillac mill. From the HAMB this coupe has the early look but not the sinister look of the Busby coupe. Â Note generator hanging out on this one. 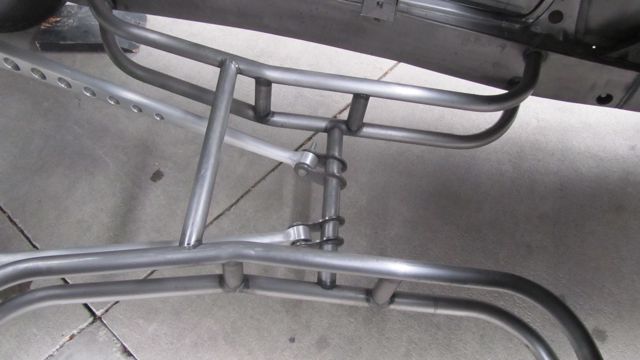 Alan Johnson has the new hot set up to emulate the old wishbone supported rear axle. Â This looks great also but would not work on with the look of the early car. Â He pulls it off with some outstanding Deuces. Â $$$$ 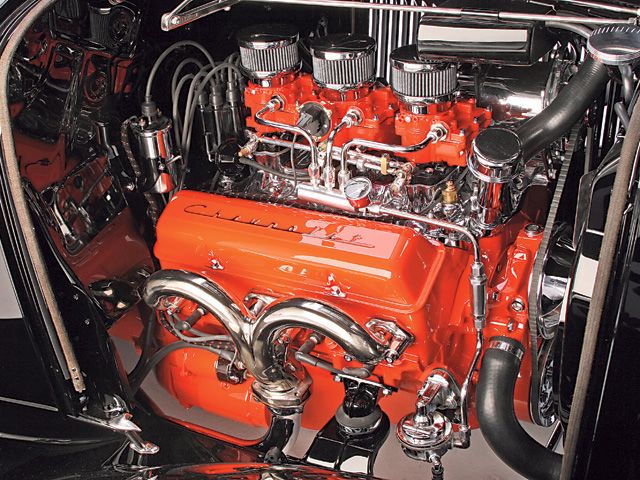 I refer to the Dave Lane built delivery for Poteet as the best example of keeping the theme all together. Â O.K., the Speedway headers shouldn’t be there. Â This is the engine that I grew up to love. Â I was 16 in 1957 and Chevy was the engine of choice in my school days. 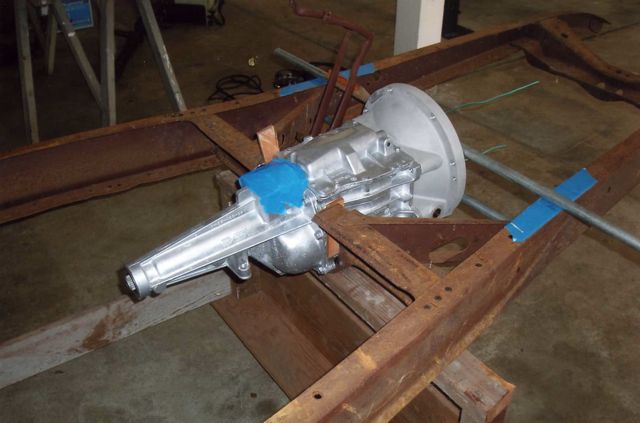 My friend George has lots of Deuce frames and K-members in his inventory so he decided to install the easy shifting T5 with the S-10 rear housing in his SD project. Â I know cutting the top off a cherry K-member would not be popular today but when you have plenty of them to spare. George simply installed second K-member without the legs and made some inner braces to tie the two together. Â Henry would approve.

The end result is an easy shifting overdrive transmission with a stock looking shifter sticking through the floor.