I was talking to a friend of mine who just completed a 30 day trip in his hot rod with a bunch of long time friends. Â They shipped their cars to the Henry Ford Museum in Dearborn, Michigan and started their trip. Â The primary focus was the New England states and the southern route home to the west coast. Â Total mileage was 6500 miles in a hot rod. Â Now that is a bucket list wish that would satisfy most. Problems were limited to a new generator on the 40 coupe and a new flasher on the woody. Â I know a lot of people have done this but I am still envious of those who can mark off the accomplishment. Â Congratulations to Tom and Steve, my heroes.

In the seventies I drove my three window to Memphis from Detroit and thought I was really doing good. Â We slept in the car and lived it up in Memphis at the fairgrounds and the Holiday Inn. Â My wife still talks about that trip with the 4:56 gears and M&H slicks I ran on the highway. Â Youth does has it advantages in many areas. Â Lately, I have driven Ruby on some great one day trips of 400 miles but I need the hot shower and comfortable bed to recover for the next day. Â The whole point of this conversation is driving your hot rod is really what it is all about to me and many others. Â The trip, not the destination, is what makes you smile when you tell the story. Â Many people fly to the events and enjoy the cars and attractions, but driving a hot rod round trip really makes one feel like he/she has built something that they can be proud of and can walk the talk. Â Maybe next year Andre will make a long distant trip right after I do the Deuce thing. Â It is O.K. to dream as dreams do sometimes come true.

Cross country trips are much easier in the big sedan deliveries like this 46 from WY. Note the sedan doors for improved visibility. 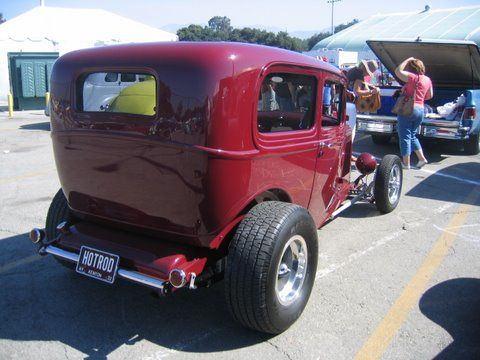 This nice Deuce sedan came out to Pomona from KY and someone purchased the car from him. Â They make nice reachers also, but not a lot of room. 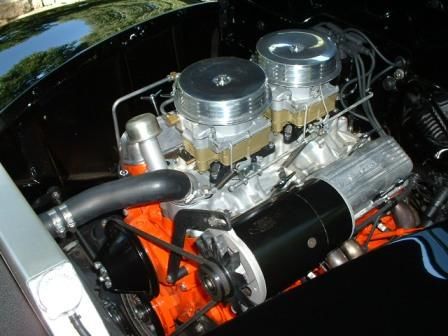 Yes, the generator is still alive in some hot rods. Â The dual quads would really suck up the $4.00 gas on a long trip. 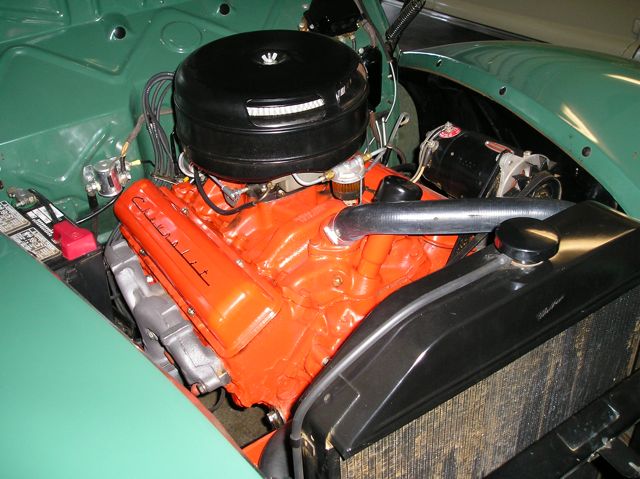 Jim installs the OEM looking 283’s in his forties and makes it look like the factory did the installation. Â Much better mileage but not hot rod looking. 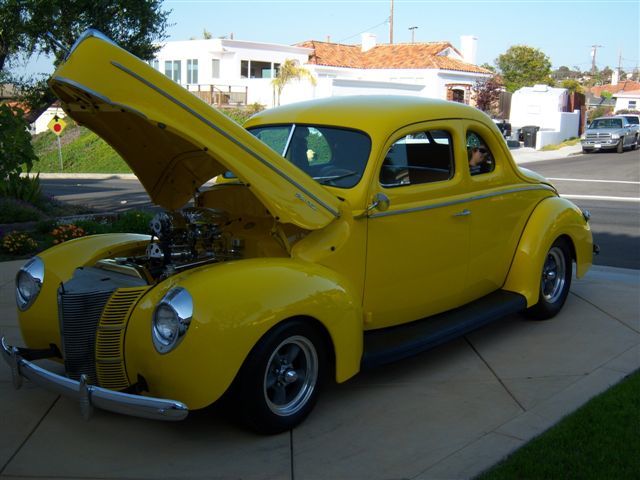 JM built this one with all the trimmings so he could drive it across the country in style. The motor is definitelyÂ a hot flatty. Â Note stacked A/C and alternator. 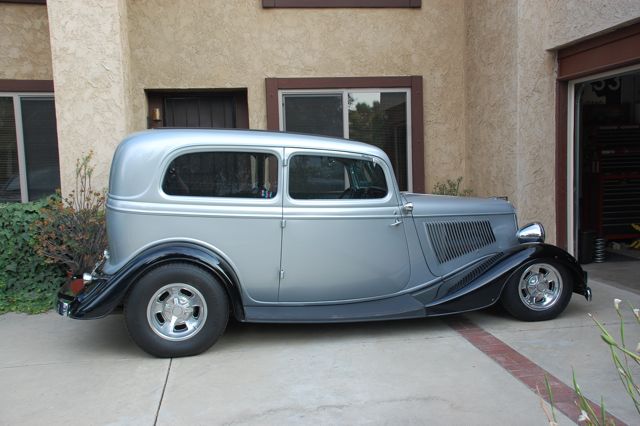 The late Joe Mayall built his cross country cruiser to drive in comfort. Â He had just installed dropped spindles on his MII and invited me over to take a photo. Way to low for his taste and driving style. Â For Sale dropped spindles ….cheap! Â I am not sure what happened to this car but I think Louie wanted it in his garage. 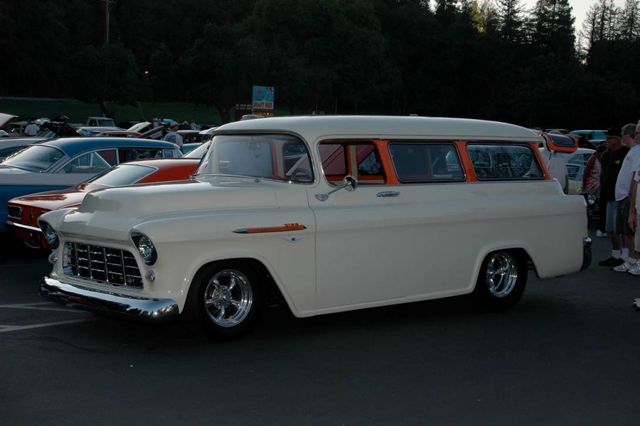 NHRA had a large crowd at their Wednesday night event. Â The 56 “GM Concept Suburban” was a big hit with the crowd. Â The story is that this was one of two built by GM and never went into production. Â It has had some modern updates but you can visualize the picture. 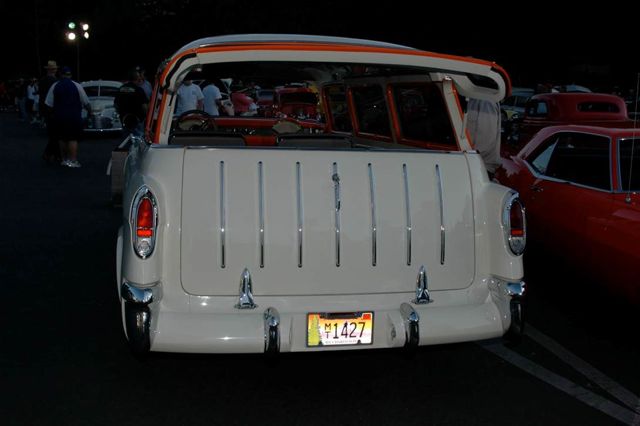 The rear was a combination of the Cameo and the Nomad which blends nicely together. Â The story is still out on whether this is a reality vehicle but I like it anyway. 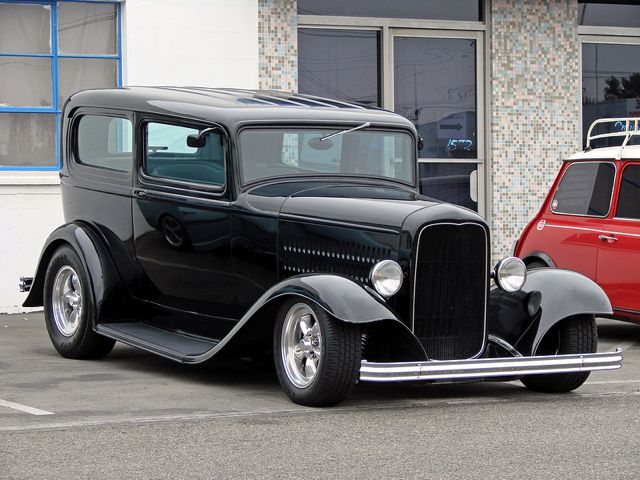 I know this little Deuce sedan has made some long hauls also. Â Mild chop and slick black paint make this one stand out in a crowd. 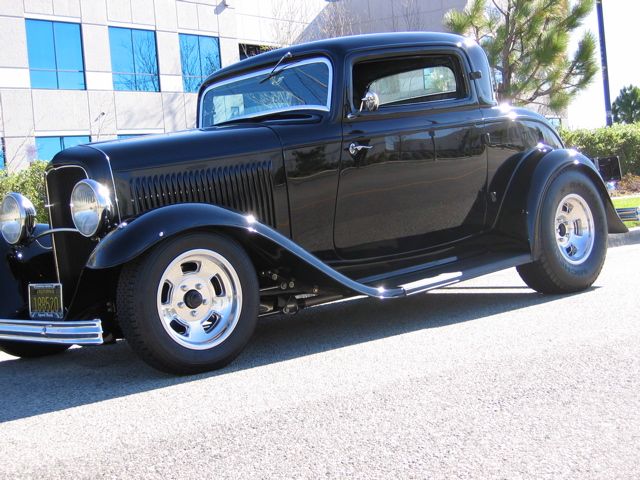 Rodger drives his cars everywhere and has been doing it for a long time. Â One of 99L’s best is this Deuce 3 window with a chopped top and perfect stance. Â Not much room but plenty of “Cool” makes it great for the local crowd. 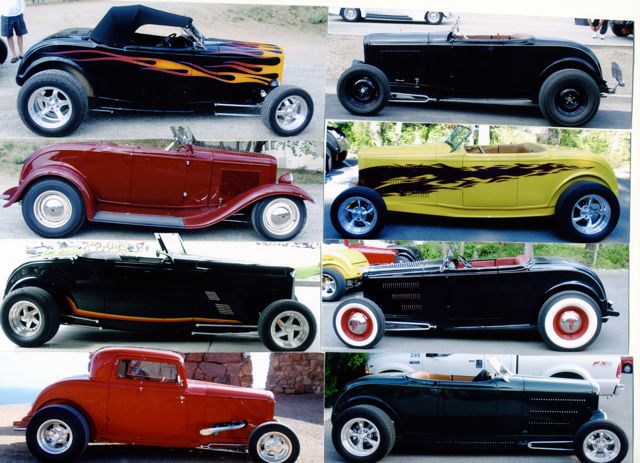 George and his crew all drove to the top of Pikes Peak in Colorado and survived the altitude. Â What a cocktail party story this would make. Â George cheated with is coupe.