Mr. Bob has a new 40 coupe that just arrived and he invited Bob-O and I out to have a look. Bob-O needed to go to the Early V8 Store to purchased some parts for his new sedan so after a tasty lunch at Toppers we headed to San Dimas. Mike and Craig were tending the busy store so we took a quick look around, purchased some parts and headed to Pasadena to see the coupe. I had located this coupe for Bob on ebay and told him I had seen the car at the Portland Roadster show in the 90’s and fell in love with the quality of the car. Peter Vincent also featured the car and its sister rag top in his Hot Rods book. Bob already has another Mandarin Maroon coupe in his fleet and didn’t want another one. I told him it was a beautiful car and he would love it. Bob now has one of the nicest 40 coupes around in my mind.

While we were at Mr. Bob’s, I looked over my old 46 wagon that Bill restored and gave to his son. I had a big lump in my throat and thought to myself, “why did I sell such a primo woody?” I wondered back out to the coupe, crawled under the car and was amazed at how detailed and perfect the undercarriage was. It is a stock suspension with a dropped axle, sway bars and tube shocks. You should not go look at cars this nice without a big checkbook or suitcase full of dead presidents. I am attracted to cars of this style and quality but they are far out of my reach. If you can step up, then this is one fine stock 40 coupe.

I am getting ready for Wavecrest and polishing Curvy for the weekend trip. The weatherman is predicting some hot days, but we will be by the beach which should be much cooler. Walt is thinking about adding red steelies and I just happen to have a set to see how they look. I think they will make a big change in the overall look that will be well accepted. I may be adding some whitewall tires to Andre for that early look. I am not sure of the look but I have seen them and they look good to me. 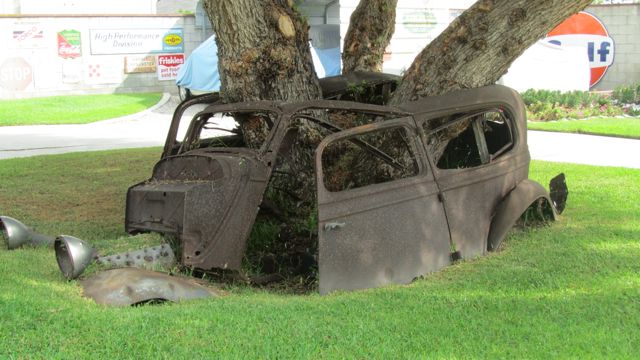 If you have never been to Mr. Bob’s then this 34 sedan will amaze you. He planted the tree years ago and the sedan had paint on it. 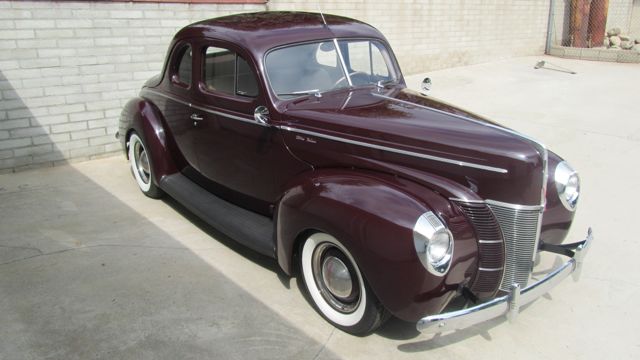 Bob has several 40’s in this color and he is not a Maroon man. I love the Mandarin color and it was done in Ditzler Lacquer years ago and still is perfect. 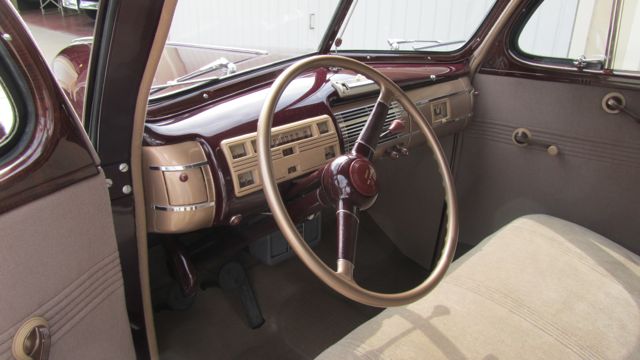 The interior is stock and as clean as you could ever want. Nothing is out of place or hanging. Note the stock correct heater peeking out from under the dash. Gary would love this 40 in his garage. 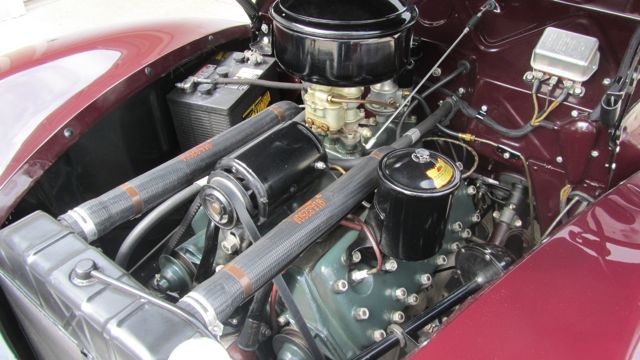 The engine compartment is all stock and very tidy. A 6 volt battery, positive ground still provides the spark. I know it is not a SBC but it would be a shame to ever change this set up. Just enjoy the ride. 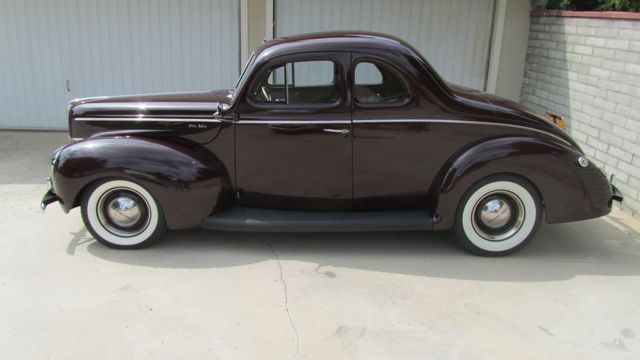 The dropped axle makes the stance perfect when you add the rubber rake of the Coker 195’s and 225’s. I love this car. 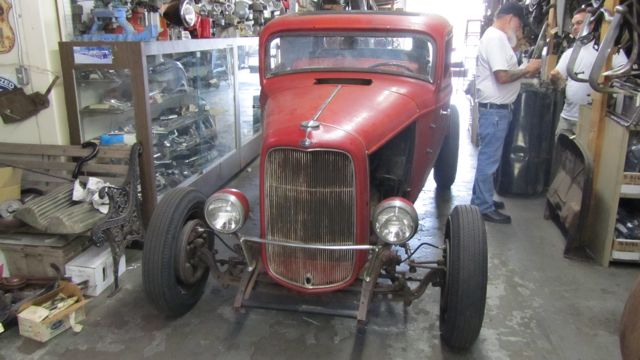 Bill’s 3 window is always fun to see. He has owned this for years and the Kennedy Boys did the chop. Perfect as is. 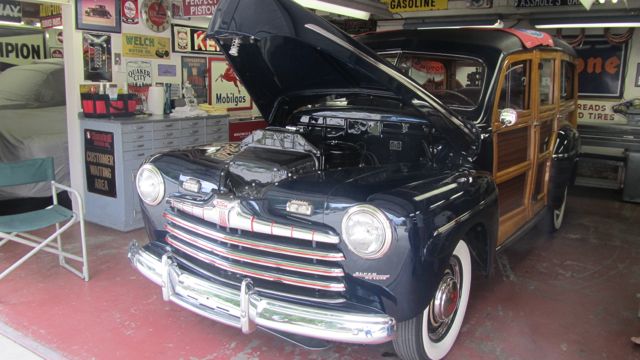 This is Lucy 1 that I purchased in 2000 from Ted. The original wood was in excellent shape even after being stored in the basement of a SF row house for years. 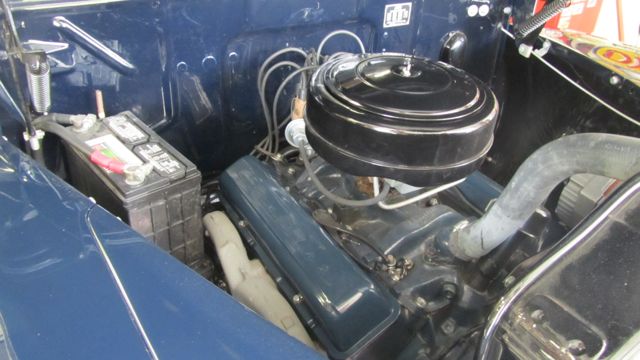 Bill followed the same plan I had in mind. He added a 327 to the stock driveline, Lincoln brakes and kept everything else stock. The wood was redone by Chris Mensano. He is the best. 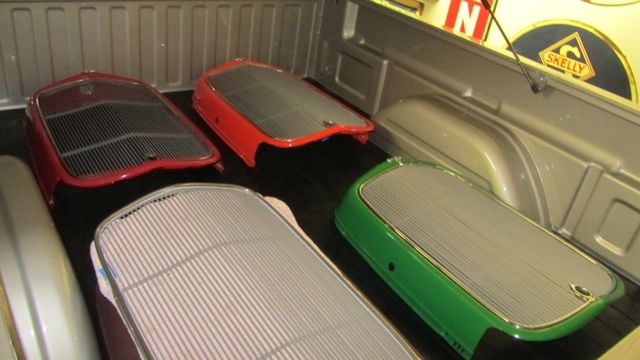 Mr. Bob also is restoring several of his stock shells for a collage on his ceiling in garage number two. These are all original and just small sample of his vast collection of Deuce grille shells and grilles. 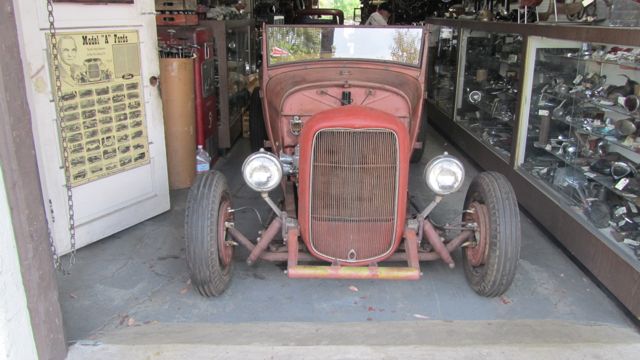 Bill has a very early A/V8 roadster with a banger motor sitting in the front hallway. He loves the early hot rods and so do I. 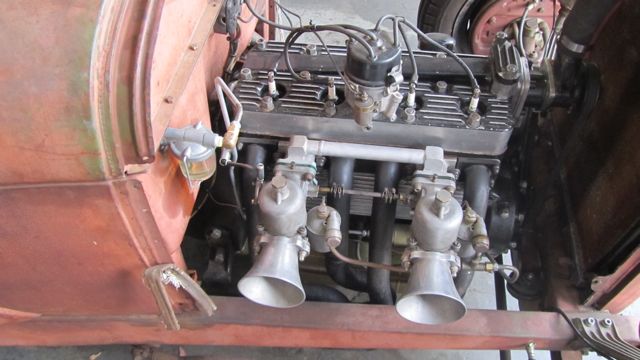 Rumor has it that this banger would cost $20K in todays dollars to duplicate.???? 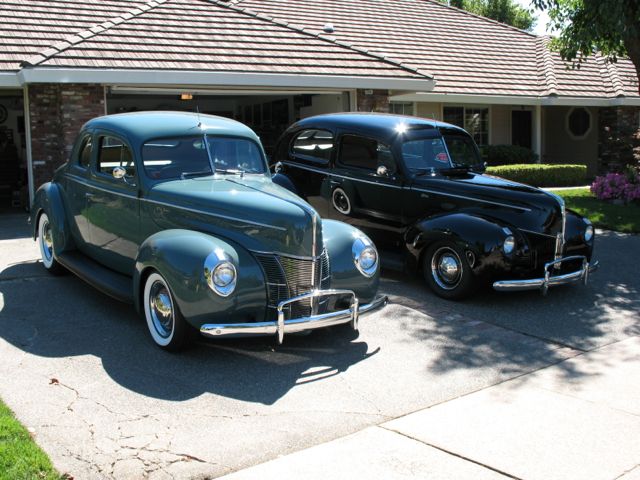 Tim has the Ford Factory Branch turning out some of the best 40’s being built today. The sedan is on its way to a new home on the coast. Great job Tim.