Dave brought his portfolio of photos from the Revival show and we all enjoyed looking at the wonderful early style cars that attended this TRJ event. Deuce’s, Forties, Customs, and every style you can imagine showed up. Steve has quite a following with his scholarly book and is a former resident of MD. I actually sold my first Lobeck clone roadster to a friend of his in MD in the late 70’s. I hope he has the event next year as I am sure it will be even larger. The quality of TRJ publication speaks for his continued success of selling a magazine for $15 in today’s computer age. I wish him many more years of bringing us beautiful photos of traditional cars and stories of the way it was and is today.

I am not really working on anything these days except household chores and that has to stop. Dave has located a 34 chassis and is helping me get excited again about the searching process we all enjoy. The Dana Point Woody show is Sunday and is the last one of the year. The venue is one of my wife’s favorite and I look forward to enjoying a day at the beach. My wife and I have had a wonderful time this year “living the dream” and I hope your experience has been the same. Thanks for tooning in.

Here are some photos from my files. 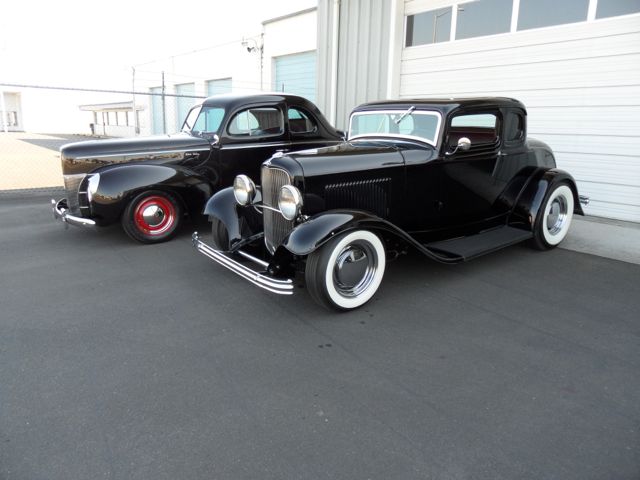 It is still good weather in the Pacific northwest so the boy’s were out having fun in their hot rods. Steve and Alan both have exceptional cars and love to drive them. This is another perfect example of a Deuce and Forty combination. 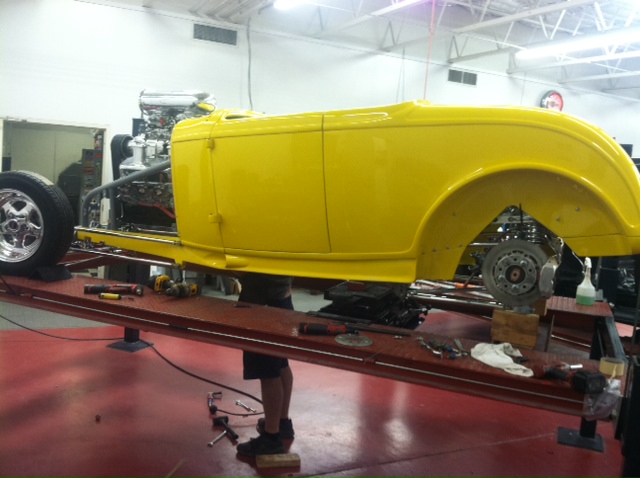 Lawson had Boyce’s roadster rebuilt after the accident and it is almost done. What a ride this roadster has been on and I am happy to see it back together again. 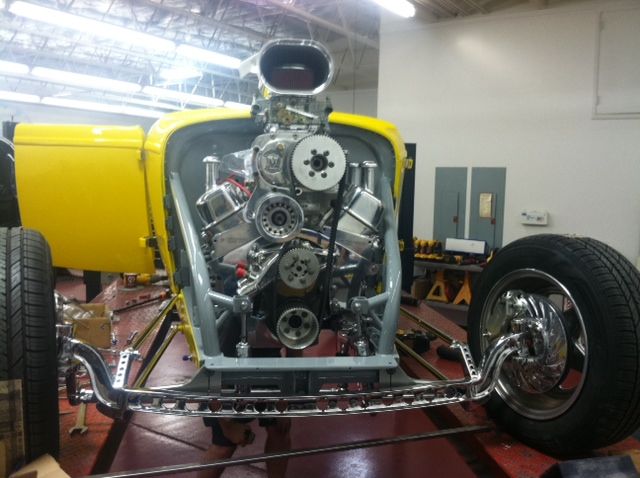 Boyce Asquith’s old Magoo built 32, now owned by Lawson, suffered a major accident a few years ago but has been rebuilt and should be at the GNRS this year. Dave is doing better and so is the car. The front suspension is a torsion bar set up and works well. I am happy that Lawson is rebuilding the car. The car is all about the engine and chassis engineering. 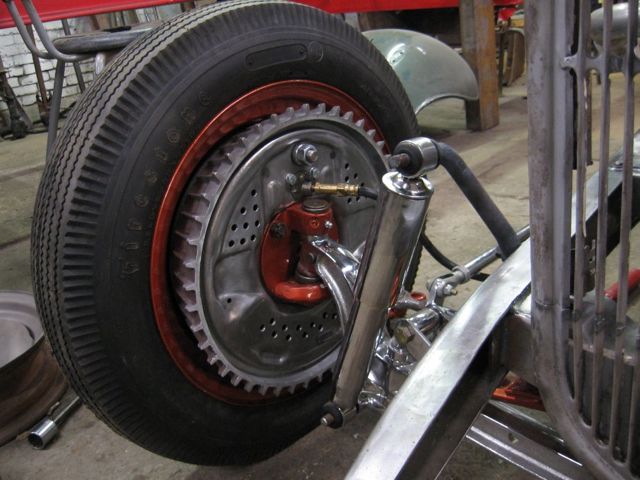 I like the look of the Lincoln brakes on early style builds. The holes add some flavor but are not required for cooling. The Buick drums have the look but the Lincoln drums are even prettier in my mind and don’t stick out of the wheels. 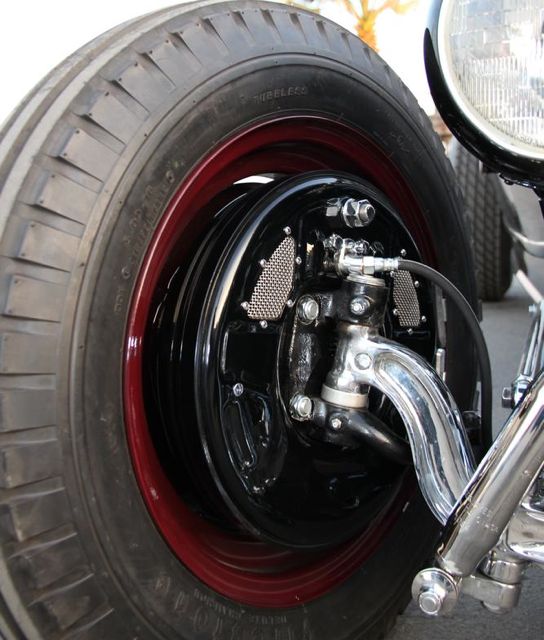 MT Products offers the Lincoln brakes and drums with the much needed air scoops. I have heard these work well on the street. 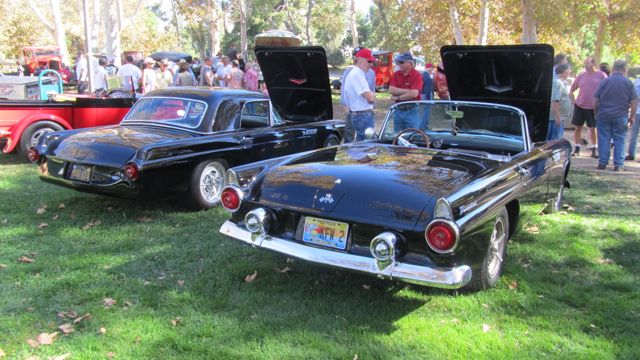 A pair of T-birds were on display at the Throttler’s this year. I am not sure who owns them now but they drew a crowd all day long. The one on the left was really modified for racing. Doane’s ? 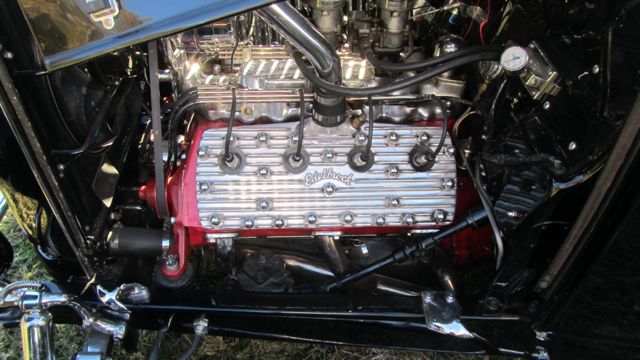 Most would agree the Vega box works better than the side steering but is a little modern for the flathead powered roadster. 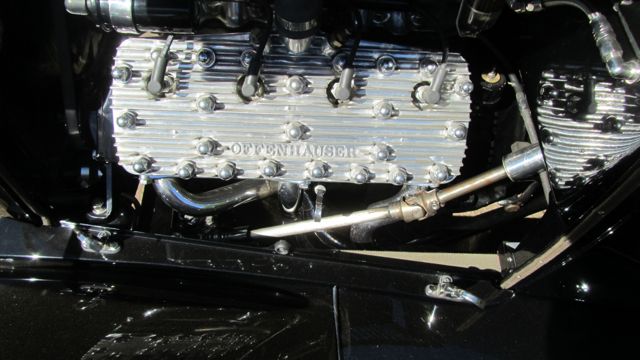 Art figured out how to add the 40 Ford cross steering to his RPU and maintain the look. I have seen them without the joint in the shaft also (Ken Gross’ roadster). 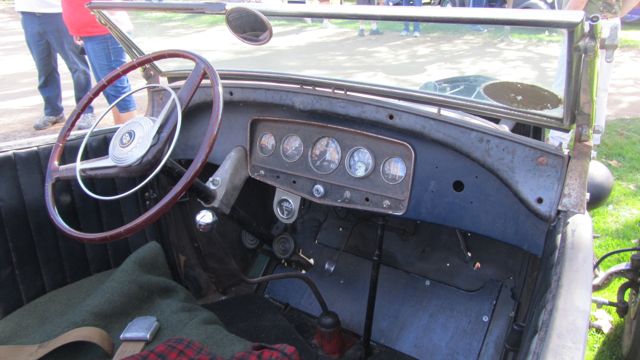 Here is another Auburn dash in a model-A that looked untouched. A reader identified Monday’s dash as a 34 Chevy dash. Thanks Uncle Bob. 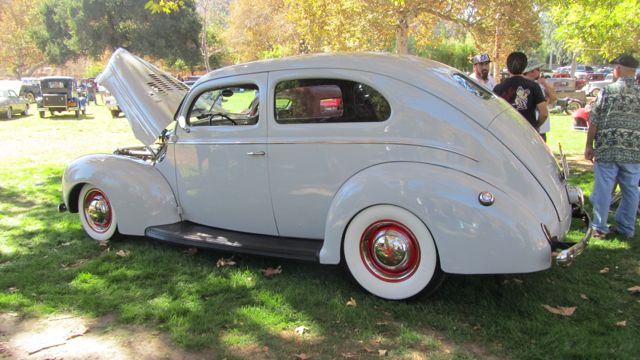 I love the old roadsters to look at but when the day ends and the feet are hurting this tasty 39 has all the comforts you need to take you home. 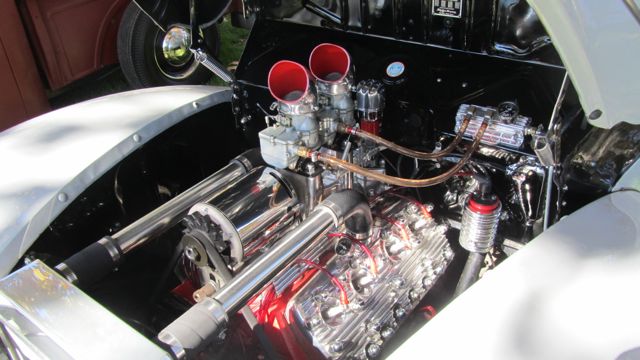 The 39 had a well detailed engine compartment and sounded just as good as it looked. 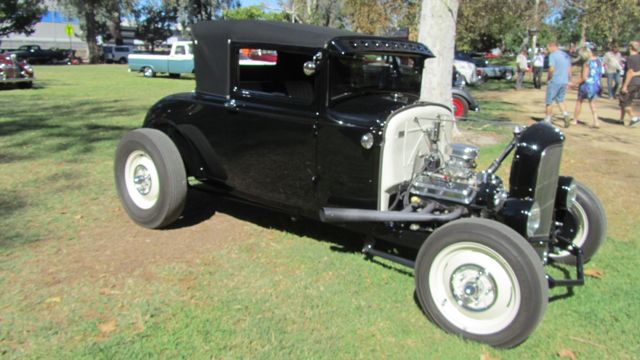 I followed this cutie out to the highway and it sure sounded good with the SBC barking through the gears. 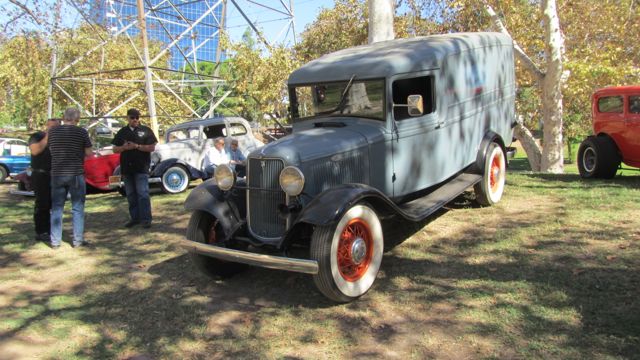 A very large panel truck was parked on the hill and I was hoping he had a good emergency brake system installed. A rare panel indeed. 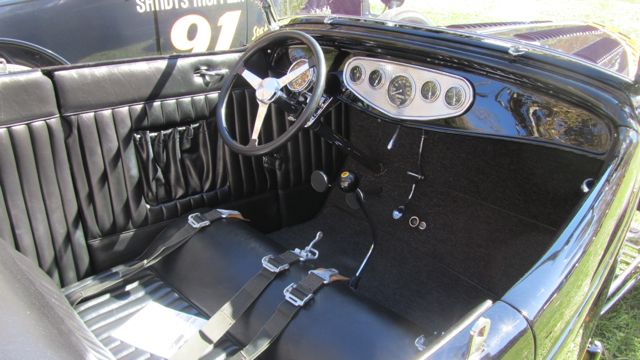 Since this is the roadster that started it all for me, I thought I would show you the difference from the 70’s to the current state of Barry’s interior. Note the dash panel is not an SW but a piece of round rod bent in the shape of the old panel. Barry could not locate a good one in time for the show and had Bill build this one for him (he worked for Bill). He later would reproduce these for his business. I still have the one I purchased from him in the 70’s for $125. 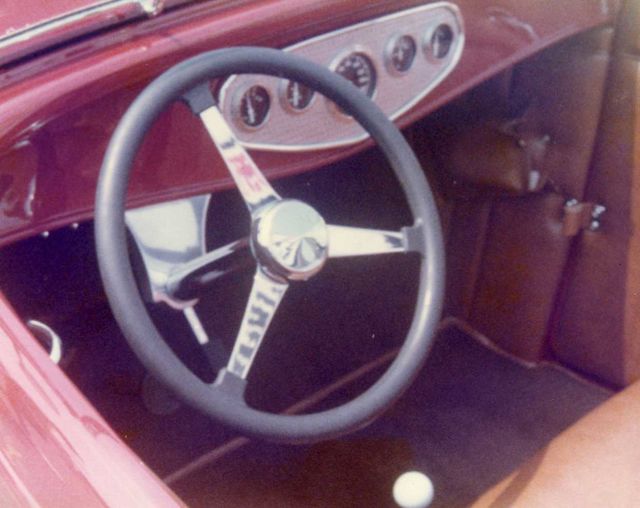 Here is a photo of his roadster in the 70’s when he debuted it at the Nationals in Columbus. Note the dash panel. Many changes have been made to the car but it is basically the same car with some updates to suit Bruce’s tastes. 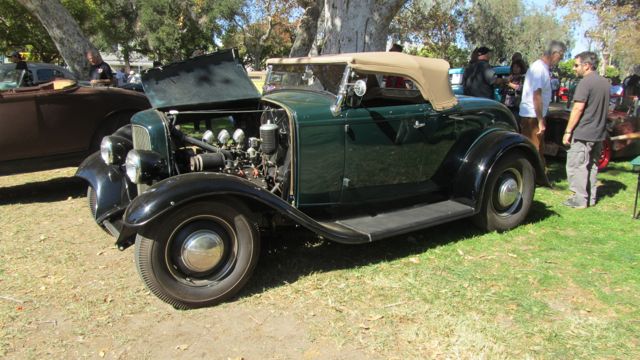 Fenders are optional at the Throttler’s show and this oldie still maintains its fenders and has been around for a long time. The upward slopping top was discussed and Bob-O thought it may be exaggerated slightly but many early rods had the same look.