I have been busy this week wandering to various shops and doing some garage crawling. Bob-O wanted to switch out his v’d windshield in his new 40 sedan to the two piece design. Big Al in Pomona was recommended highly and he truly did an excellent job of replacing the old glass, cutting the new and installing the pieces in the car. What a difference the two piece windshield makes in a 40. IMHO a one piece windshield looks all wrong in a 40 Ford. We had some time left so we visited the Early Ford Store and the Kennedy Boys. I always enjoy both of these shops as they provide lots of ideas for current and future builds. I found a beautiful 33 grille at the EFS but it was way out of my price range. If you want a model 40 you better be prepared to step up for the hood and grille. Mike had all the cars parked out in the back and we spent some time looking them over, especially the new CMG 40 coupe with the Olds engine. Bob-O purchased some parts and we then headed to the Kennedy Boys who were busy working on several projects. Jason and Joe are always very receptive to us stopping by and provided some information on the cars they are building for customers and themselves. The boys had just purchased some Deuce 5 window coupes that soon will be put back in their original shape with the metal working skills of the team. I fell in love with the yellow 34 coupe that has been under construction for a while and it is finally about ready for her maiden voyage. They were also working on a cherry 36 three window with all the traditional items they are known for. Jason showed us some prototype 36 rear bones with support rods and brackets installed they are a work of art and are on my list for a future blog. I love the looks of the bones on a traditional chassis and if you add big horsepower, a heavy right foot and an aggressive driver you need reinforcements to keep them from breaking. The traditional build style is what the boys are known for and they do it right. We thanked them for their time and headed down the road in the smooth riding sedan with the new windshield. Henry would have been proud that we put her back to stock. I glanced over at the speedometer and it registered 80 mph which agreed with my GPS. Bob-O’s foot must have been heavy from all the walking we did today.

Once home, I decided to stop by Bob’s house and look at his two projects, a 40 sedan and 64 Chevelle wagon, which he just had painted by the same shop that painted Pepe. He had a big grin on his face and told me to come in and have a look at the final finish. When I opened the garage door, I could see the mile deep paint on both the cars. Another Bob had just finished buffing them out to perfection. Painting and prep work are both very time consuming but when the last buff is completed all the work seems worth while. I will show his cars in a couple of weeks when he has the trim installed.Â The day was long but the memories will last forever as I continue my pursuit to keep the fire burning and my keyboard busy.

Go out in the garage and build your dream. 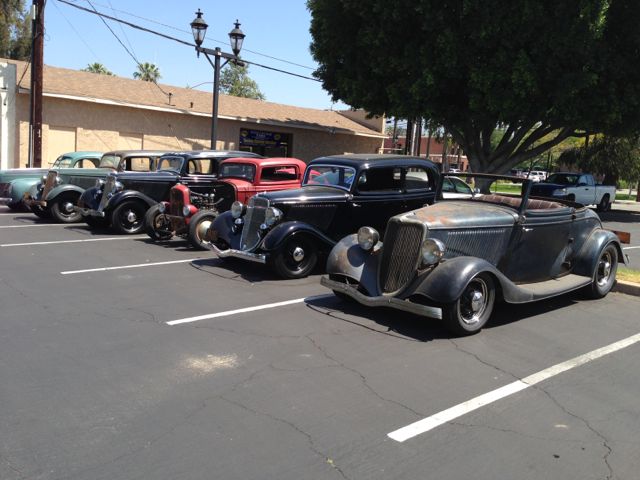 The lineup continues to grow at the Early Ford Store. I spent considerable time looking at the Cabriolet he has purchased. 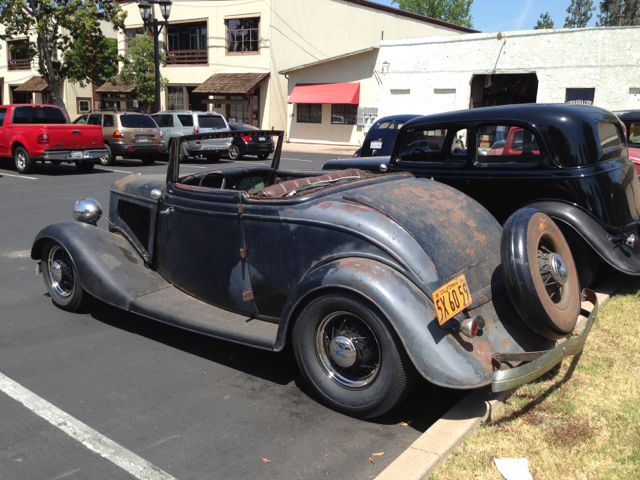 He found the car just as you see it and had Mike clean up the floor but that is it. Jane loves this model 40 Cabriolet better than roadsters. 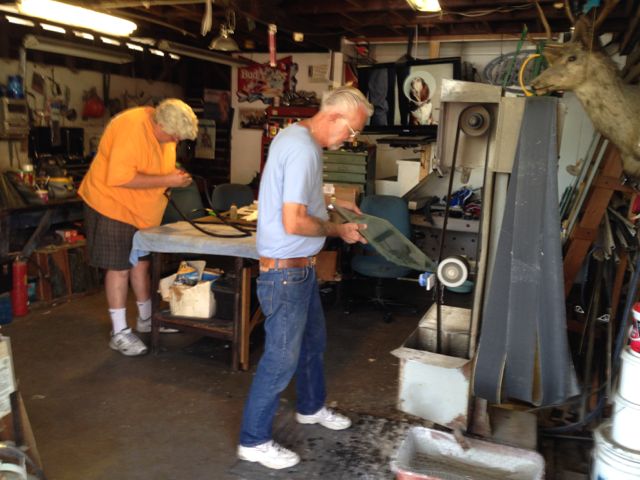 Big Al and his partner are hard at work cutting and polishing the new glass for the 40. Al has all the patterns and cuts the glass by hand. 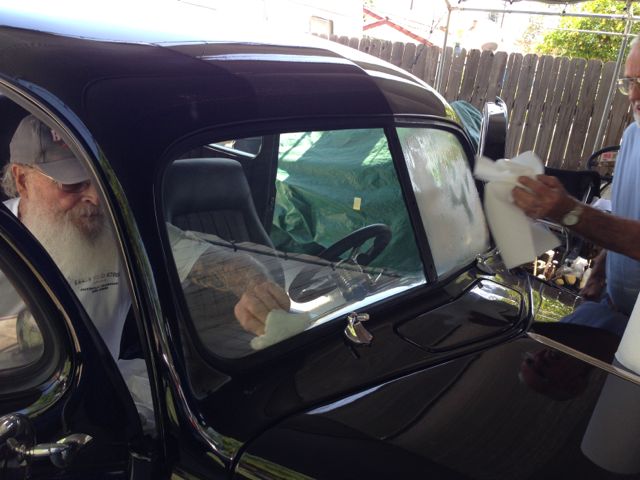 After about 2 hours both windshields were installed and Bob-O was cleaning the crystal clear tinted glass. He is fussy you know. The new center strip from the EFS was quite a task to install but the boys made it happen without any scratches. 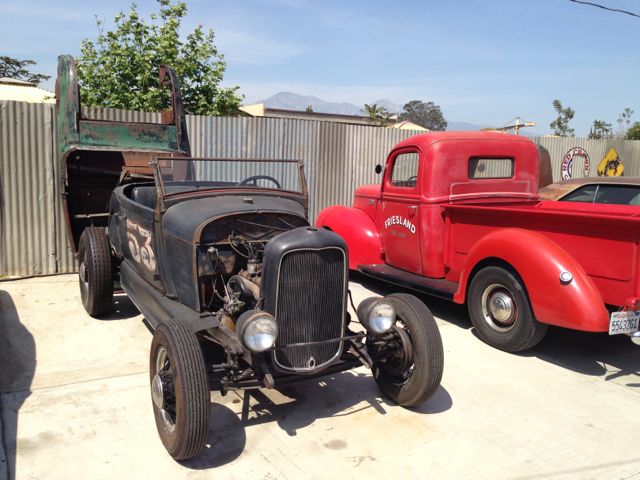 The first two cars we spotted at the Kennedy Boys were the 29 roadster and Jason’s primo 40 truck. There is another 29 roadster body stacked behind the this one. 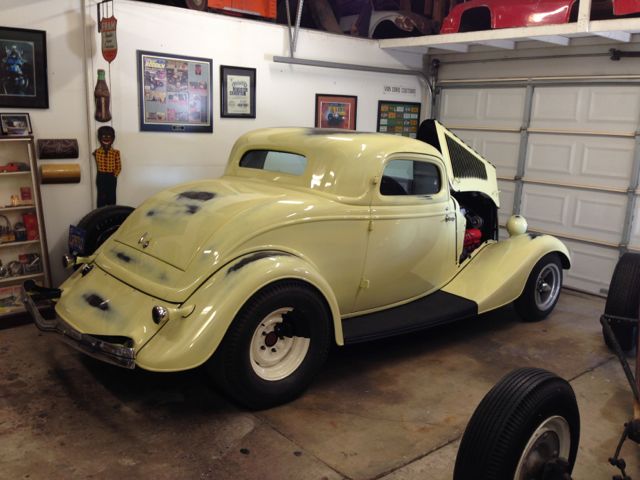 Perfect stance and chop performed by the boys made this one my favorite. Â A blown Cadillac engine makes it one of the “Back in the Days” build. 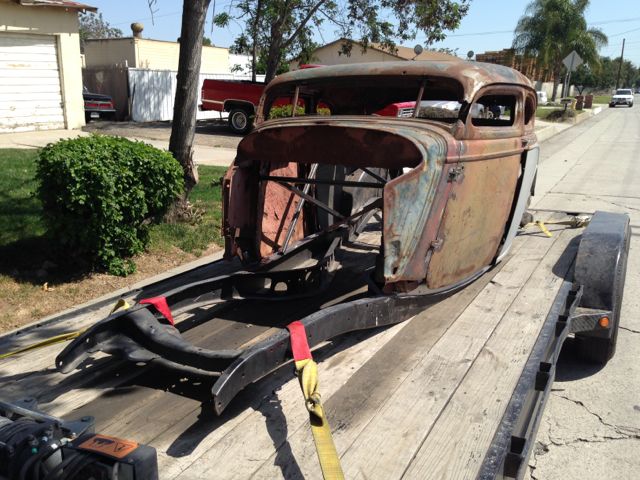 A heavily hammered 5 window was parked out front so I wondered over and took a photo. These guys save all of the old Fords regardless of existing condition. I admire those who attempt these restorations and know it is a labor of love that keeps them alive. 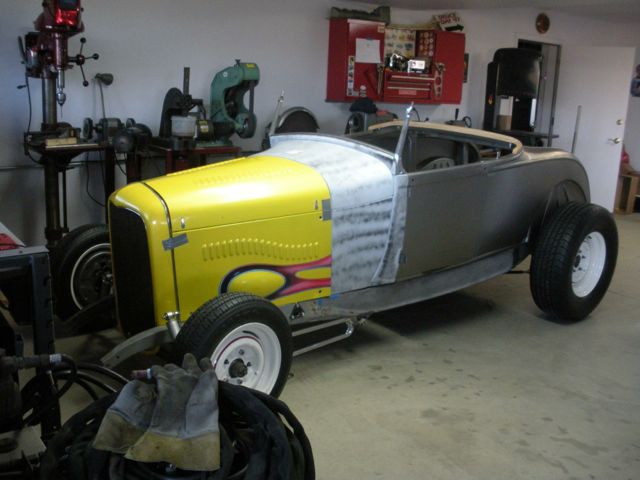 Don has pieced together Pete’s old 29 roadster and has it for sale on the HAMB. He has the eye for building hiboy roadsters. There is lots of history behind this one. 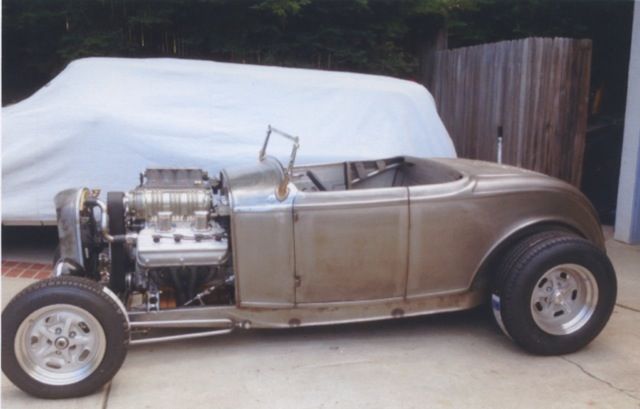 Dave stopped by Tom’s to see how his roadster is coming along and sent along some photos. The car is all motor which Dave loves. I think he may require oxygen to stay alive on the street with this bad boy. 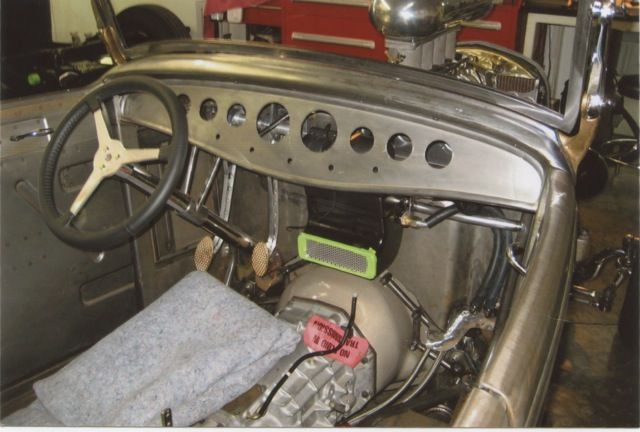 The interior is work in progress but the layout is complete. Moal heater, pedals and Bell style steering wheel all spell Hot Rod. 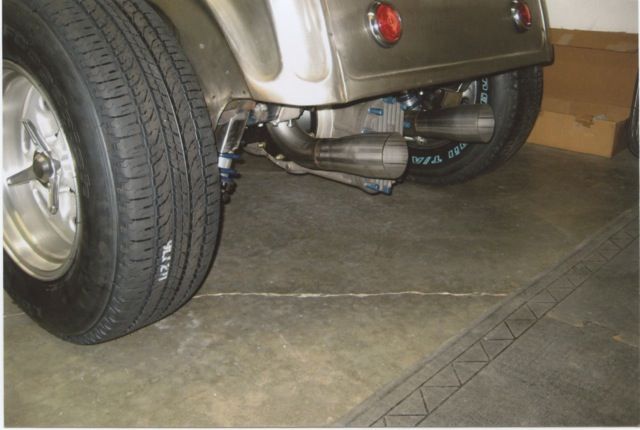 All that HP requires a Winters Champ to handle the torque. I will bring you updates throughout the build. 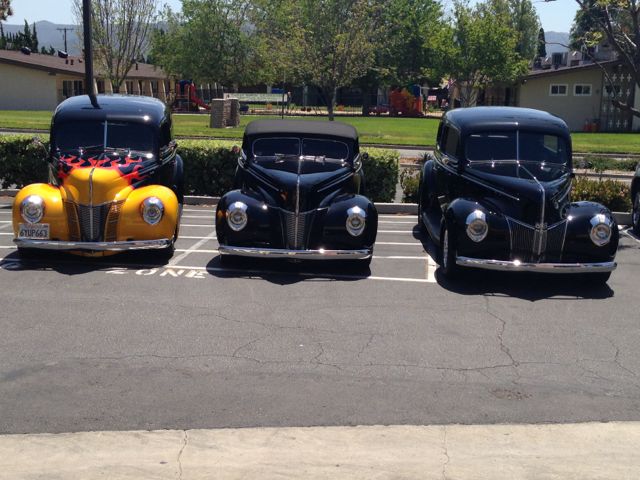 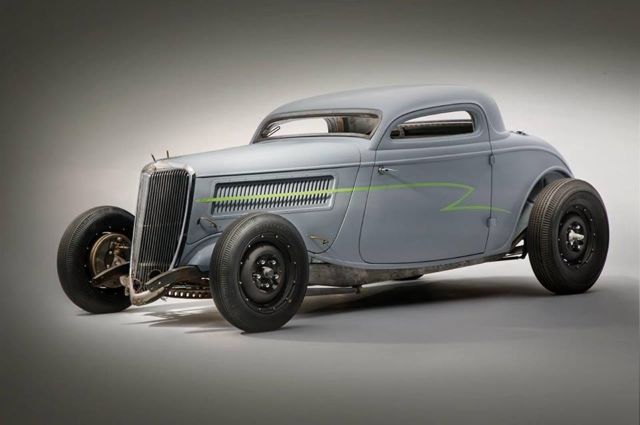 SO-CAL posted this photo of their build for Billy. You may remember his first 34 built by Don Thelan and the second by CSR. He likes the Hot Rod look and so do I.