Toppers was light today and I am not sure why. Â Someday’s people are just too busy to visit the pizza joint. Rich and his wife stopped by to say hello and showed us photos of his new 32 roadster he is building. Â We talked a lot about the ipad and how nice it is for storing photos. Â I think I am going to have to break down and purchase one for Pewsplace. Â Bob O and I bench raced about 40 Fords as I had brought an album full of 40 Ford photos from over the years. Â I have a photo album for all of the Fords that I love…32, 33/34, and 40. Â I have been taking photos since the 60’s so I have a lot of photos all organized into albums representing various events and cars. Â I had hoped to scan them but I never got around to it. Â The digital age makes taking pictures easy and inexpensive. Â Storing them is also easy and provides me with the material I use for Pewsplace.

I mentioned yesterday that the Outrider’s Picnic is one of the top events on my list and this year there were so many nice cars that I took over 250 photos to share with you over the coming weeks. Â You see cars at the park that you don’t see anywhere else. Â Traditional cars are alive and well in the Outrider’s Club. 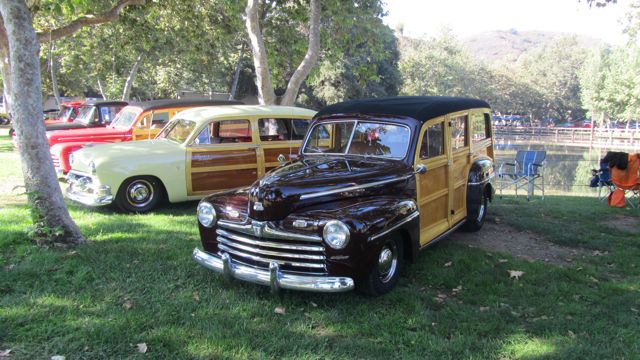 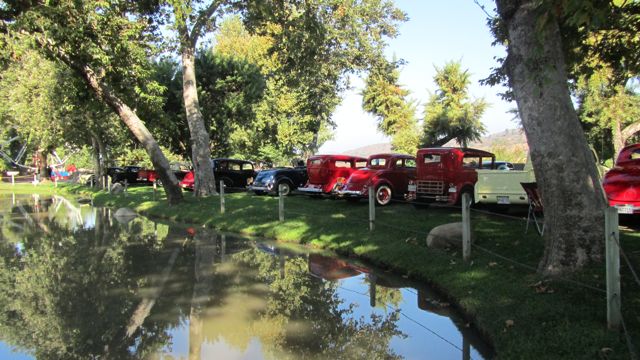 We were sitting in our chairs and looking at all the cars that were parked around the lake. Â The wife loves this place and the Outriders who sponsor the picnic. 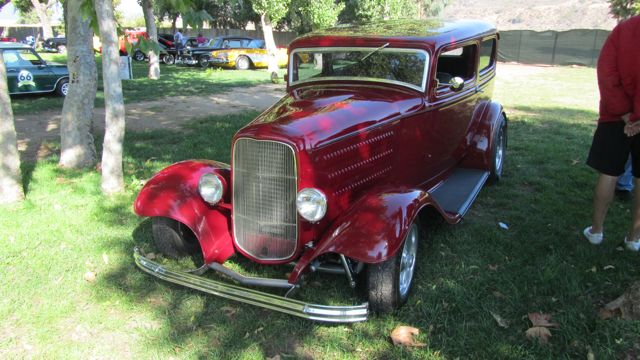 Dave was parked right across the way from us so I went over and introduced myself. Â He is the current owner of this sedan that was built in the 70’s by my good friend Ron. Â Steve Davis did all the metal work and it is flawless inside and out. Â Dave spruced up the suspension and has been enjoying the car all summer long. 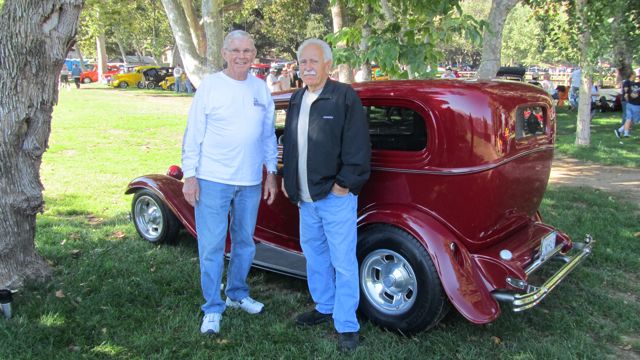 Dave is on the left and the original builder Ron is on the right. Â Ron drove the car as a hiboy and painted it yellow. Â He talked Jake of P&J fame out the car which was a very cherry sedan body. 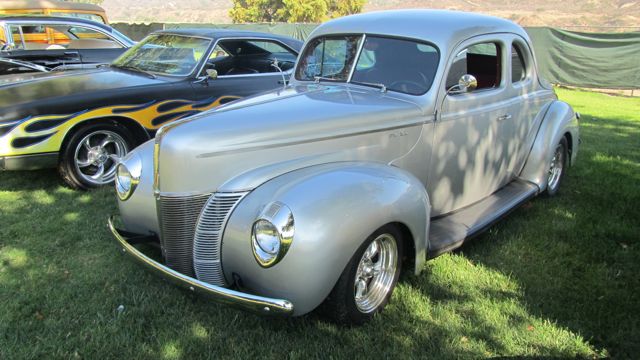 You don’t see many silver 40 coupes but this one was very nice and had a perfect stance. 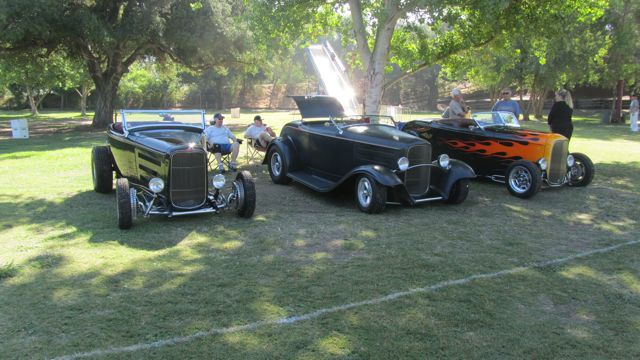 The Deuces were out in force this year sitting in the shade on the all grass park. 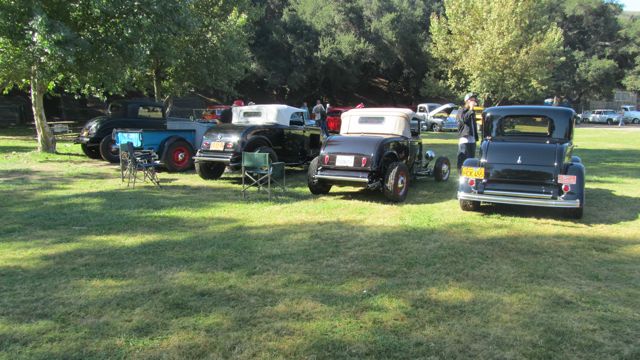 More Deuces from the rear. Â All of these cars were the real deal and very traditional. 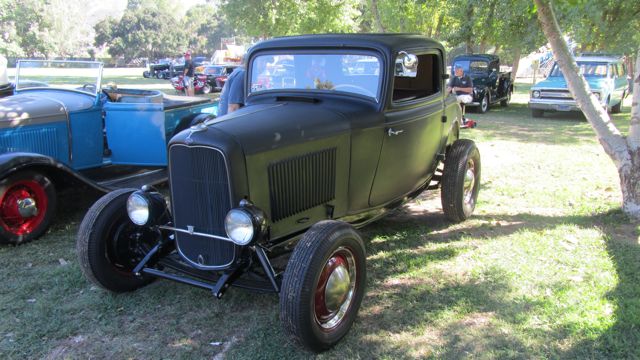 The 3 window was built in suede with a completed interior and painted chassis. Â More tomorrow. 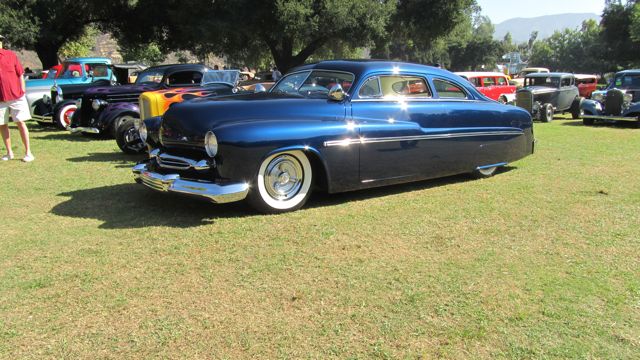 Terry had his 51 Mercury parked on the grass for all to admire. Â The car has to be one of the best chopped Merc’s in modern times. Â I am sure this car was totally metal finished by Terry who is a metal genius. Everything done on this car is done to perfection, no exceptions. 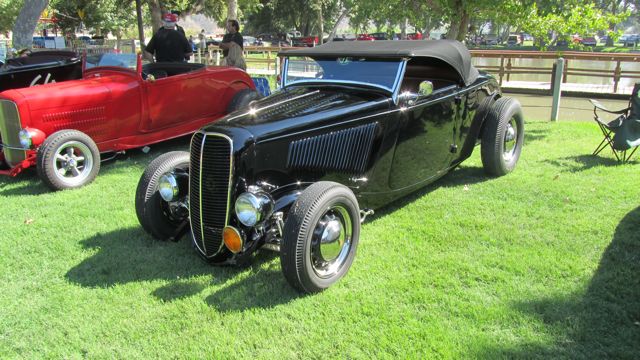 You know I spent a long time looking at this one. Â I don’t know who owns it now but it is the car on my heading. Â I had never seen this car in person and now that I have I really can appreciate the workmanship. 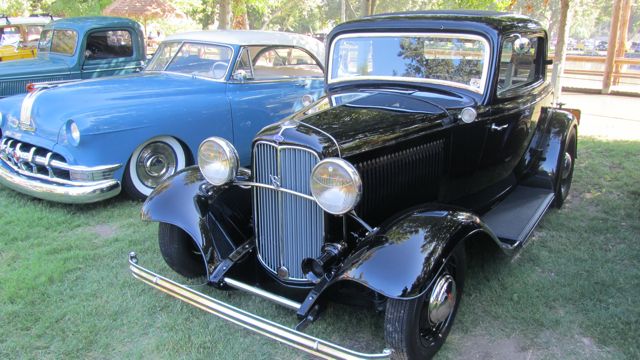 Dan had his Winter’s Grille 3 window lined up with the other Outrider’s cars. Â He owns several high quality Deuces and owns Poor Boy’s Hot Rods. Â You may remember him from the Boyd TV series as being one of the nice guys BoydÂ didn’t yell at.

JR had his Moal built Deuce standing tall and open for all to admire. You should see the detail that Steve puts into a car. Â The Deuce was started by the late Mike Martin and finished by JR. Â Mike would be pleased with the outcome of this marvelous hiboy roadster.