I am still recovering from all the walking at the show so I took it easy yesterday. Â I spent a couple of hours fitting my new bumper to Andre. Â I am sure he likes the bumper but wants it re-chromed for that shiny look. Â I had to hammer a little crease out of the top but it came out nice. Â I don’t know why I was hung up on finding a flat bumper but I am glad I kept looking. Â I still need to locate a double rib original for the front bumper. Â I have two Drake new ones but I prefer the original bumpers. Â I may even have one up in the storage area of my garage.

People are still talking about the LARS and how large and spread out it was this year. I found the layout to be very good but I need a scooter to get around the Fairplex facilities. Â The hotel was renting them for $90 dollars which would have been a good deal for me. Â I talked to people who purchased some cars and to some who did not sell their cars. Â I think it was a buyers market and if the car was priced competitively it sold. Â High end cars ( $75K and up) did not seem to sell right away on Saturday. Â I suspect Sunday was the day to get a bargain. Â Attendance on Sunday is always less in the swap meet area. Â Vendors do the best on Friday and Saturday even though the show doesn’t officially start until Saturday. Â As I stated yesterday, I think this has to be one of the best shows the LARS have produced.

I still have company and will be hosting them until this weekend. Â People enjoy the LA area and the vast number of car related places to visit. 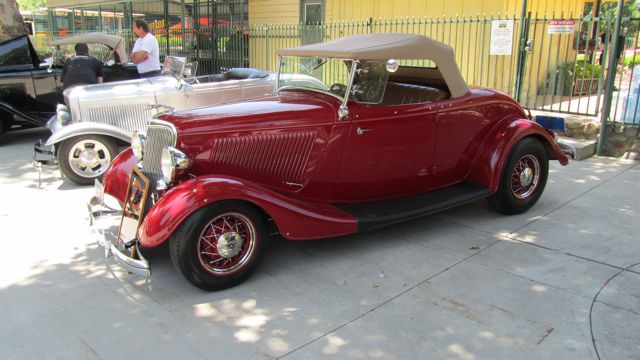 A former SRM cover car that is owned by Jerry in Downey is a super example of the 80’s resto rod look. Â I like everything about this car. 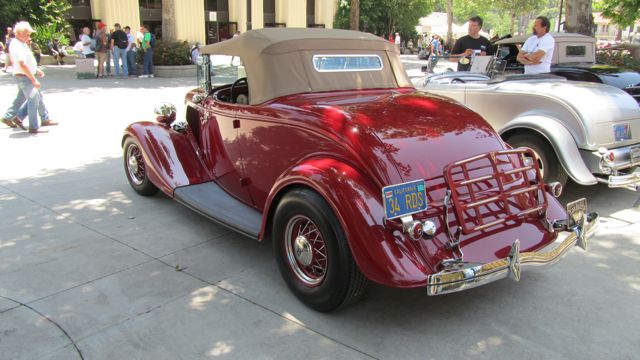 The luggage rack looks right at home and is necessary on this rumble seat roadster. Jerry is an LA Roadster club member. 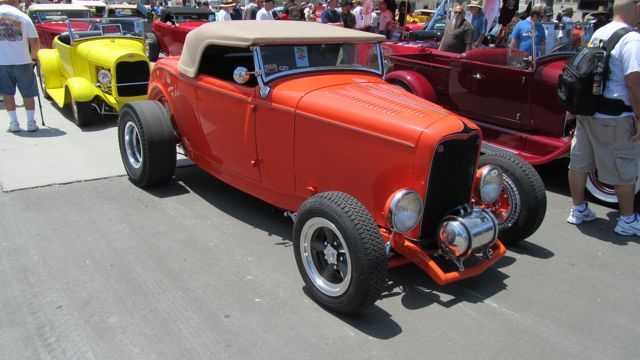 The late Tom Senter started this car and planned to run an Ardun motor. Unfortunately, he passed away too early in life to appreciate what a nice car he built. I am sure he really enjoys looking down on how well the car was finished. The car has become a standard for hiboys for many years. Â The roadster is very simple but elegant in execution. Â The current, long time owner, Dennis Kyle takes very good care of the car and has several sets of tires and wheels to give the car a different look. Â I have the TRJ poster on my wall. 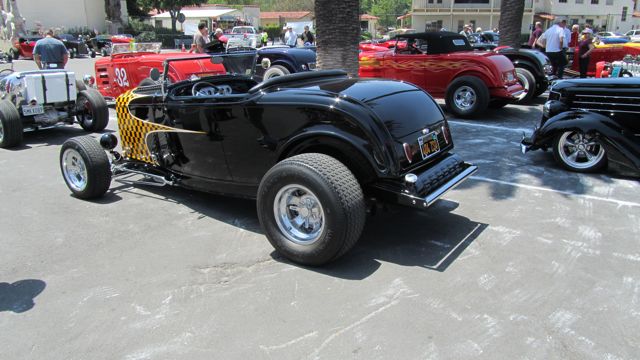 Barry did get to see Bruce’s rendition of his old 70’s maroon roadster when he drove his new clone to the LARS a few years ago. Â Barry called me when I lived in Chicago and offered me the car for $25K. Â I really wanted the car but you know $$$ got in the way. Â Sometimes you need to step up for these landmark cars. 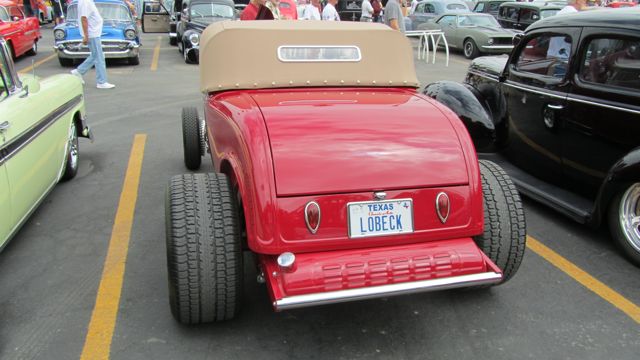 Barry’s clone roadster was in attendance this year and looked in excellent condition. This is a Wescott body car as the new steel ones were not available at the time. Â Barry built a lot of award winning FG cars in his shop. 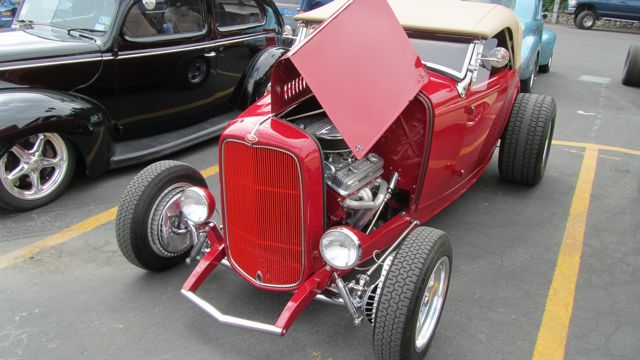 Barry would have liked that his car is being maintained and shown to the public after his passing. Â He will go down as a true legend in the hot rod industry. 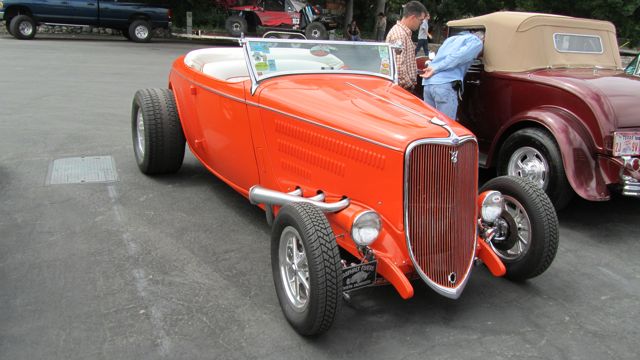 Ray has his 33 back on the road and looking good. Â Brizio did the chassis for this R&C Cover car and installed the Halibrand QC in the rear. 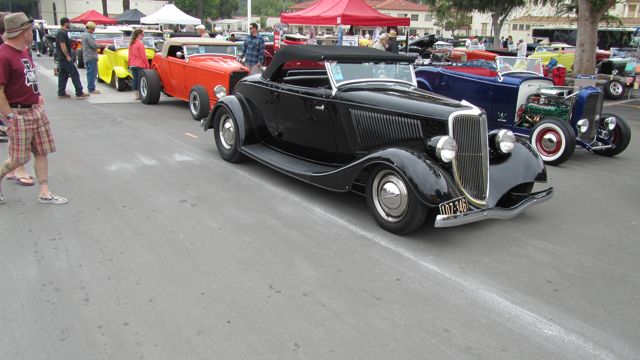 Rodger came all the way from MO in his beautiful black 34 roadster. Â He has built some really super cars in his career and this is one of the best. Â He loves any color as long as it is black. Â I think Henry would agree. 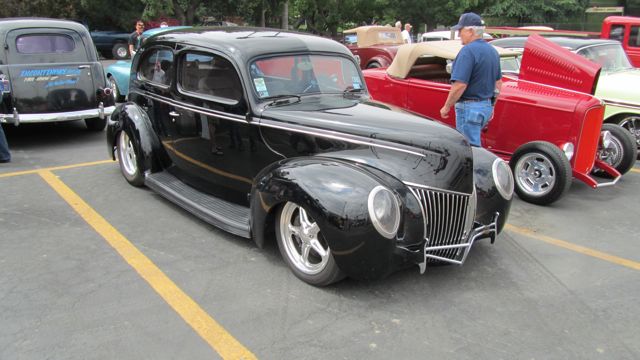 Jack drove his ground hugging sedan from TX to enjoy the comfort a sedan offers to its passengers. Â SRM did an article on the new roll bar and mini tubs he installed for that BIG engine. 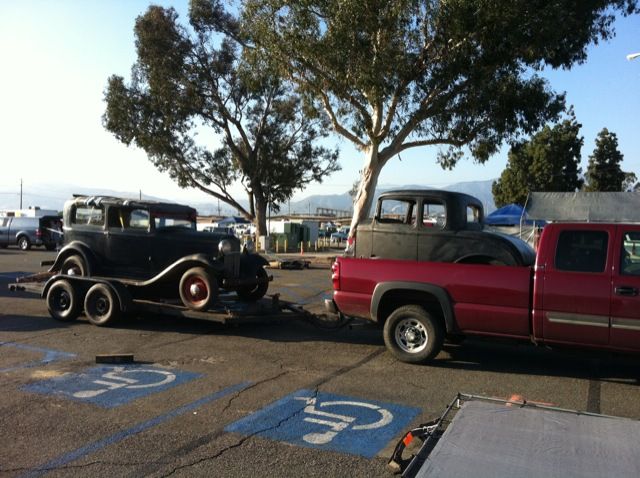 The swap meet was full of Deuce cars and parts. Â I spent some time looking at these two deuces and they were very nice projects. Â The sedan was priced at $27K and the 5 window (body only) was $24K. Â Step up or step back. Â I don’t know if they sold but the cars were rock solid rust free bodies. Â Just add another $100k to finished and you will have yourself at nice Deuce. 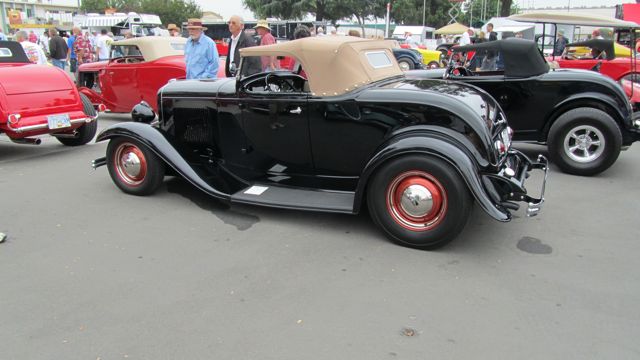 Ironically, these cars were parked in front of Sid’s Bop Top booth. Â Tops make or break a roadster. Â Here you can see the black car with a tan or black top, with or without the snaps showing and fenders or highboy style. Â The red 34 in the background was hiboy with an original style top.