It rained all night and well into the morning hours making Tuesday another cloudy overcast day. Â Having said that, it still is fairly decent weather wise and I should be able to focus on some car projects this afternoon. Â Sometimes a nice rainy day reminds me of my many years in Detroit where is was like this most everyday. Â I recall sitting on the second floor of the GMC building in Pontiac, MI looking out the window wondering when it would ever clear up so I could drive my Nomad to work. Â Yes, in those days I had a love for Nomads, 1956 models to be exact. Â I built a very nice one that I drove to work on nice days. Â I was a foreman on the line so I arrived early and left late in the afternoon. Â I often stopped by Gary’s who worked the same shift I did and we would look at his very cherry Deuce 3 window. Â I always told him that when he wanted to sell the car I was a buyer. Â My career took off and I moved away from Detroit and never heard anything about the coupe until 1983 when I received a call from another friend who said Gary was going to sell the car and did he know where I lived. Â Fortunately, I was living in MN then and could go back to MI anytime I wanted to on business. Â I scheduled a trip back to Detroit, made a deal with Gary, rented a car and trailer and hauled the car back to MN. Â We just had 24 inches of fresh snow so the trip was very exciting. Â My son and I unloaded the car and went for a ride in the snow. Â I had a phaeton project going at the time so I parked the coupe and saved it for another day. Â After a year, I was again transferred to LA where I hooked up with Boyd and Chuck who helped with the 3 window project. Â I sold the phaeton and concentrated on the coupe for a couple of more years until I got the SO-CAL roadster fever and traded the car for a Boyd chassis and “Wescott California Special”. Â I spent way more money on a car that I had ever done before and cars were cheap in those days except for Boyd’s work. Â I sold the car to Jerry who built a GNRS contender and came in second.

I now have another chance at a very nice car that I made the same remark; “If you ever want to sell the car let me know.” Â I hope this rainy day doesn’t turn into one of those dream days and becomes a reality. 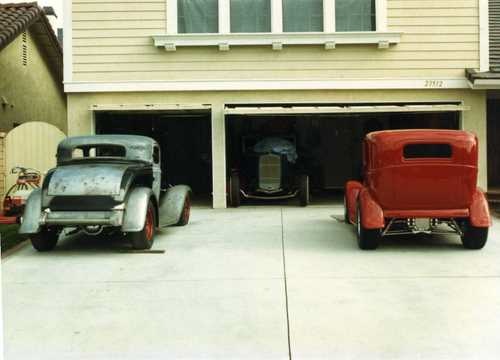 The coupe on the left is the one from Detroit that I brought to LA. Â I had the sedan delivery and the chopped tudor at the same time. Â My neighbors loved me. Â I replaced all of the Deuces with 1940 Fords in the 90’s. Â Silly boy! 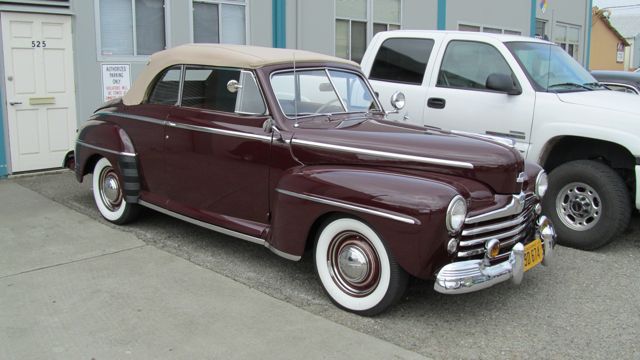 This is from Roy’s shop party. Â I loved the windwing mirror to help you see. Â The cowl mounted mirror is impossible to see out of. Â This appeared to be a stocker. 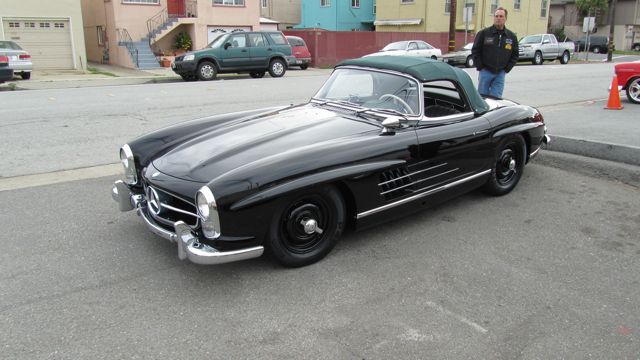 Parked outside Roy’s was this Mercedes that was flawless. Â The license plate read Canepa $$$$! 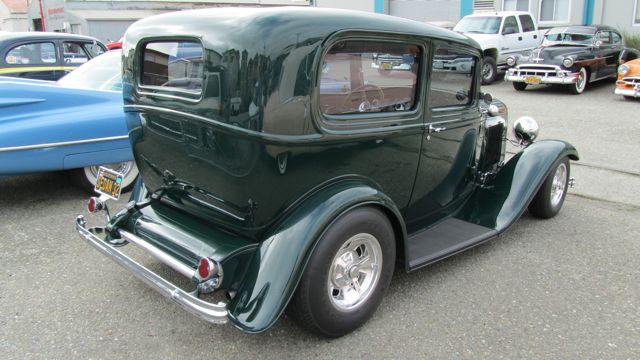 I parked by Gary’s BRG tudor sedan. Â I really like this car and he enjoys driving it on a regular basis. Â Independent front and rear suspension make for a smooth ride 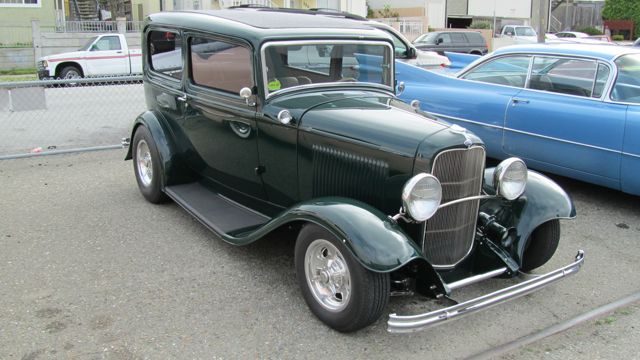 Another photo from the front shows the resto-rod look with cowl lights, horn and large Deuce head lights. 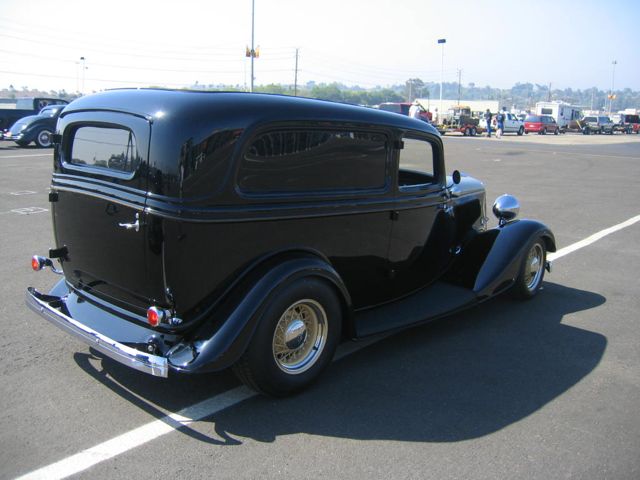 A rare 34 sedan delivery came to the LARS a few years ago and was a big hit with me. Â Inside was done in Wood like Poteet’s Deuce. 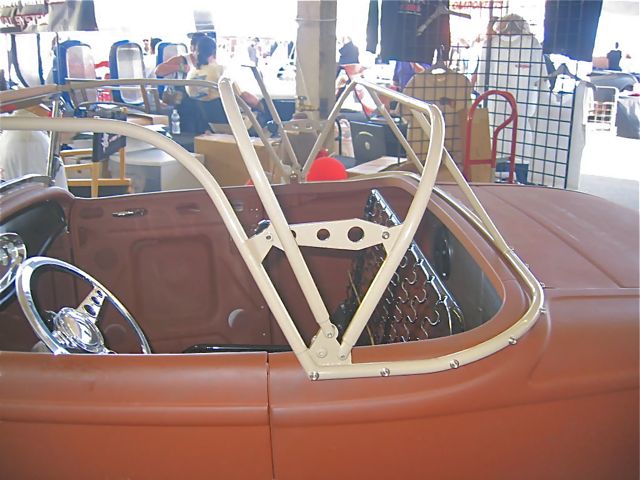 Several of you asked about the Bop Top so I thought I would show you the structure which folds and fits in you trunk. 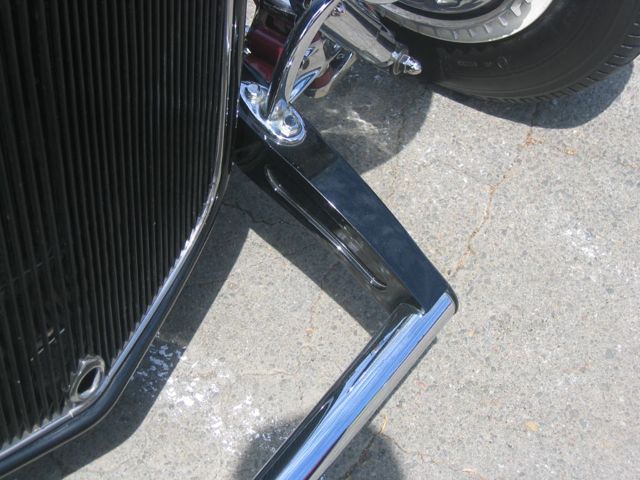 Deuce front frame horns are finished off in many different ways and I always thought Don did it best with the inset boxing plate. 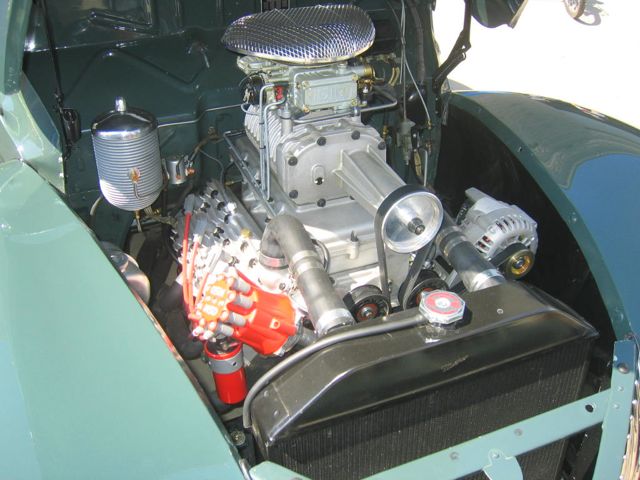 Chuck has lots of cars but loves his 40 coupe with all the motor you ever need. 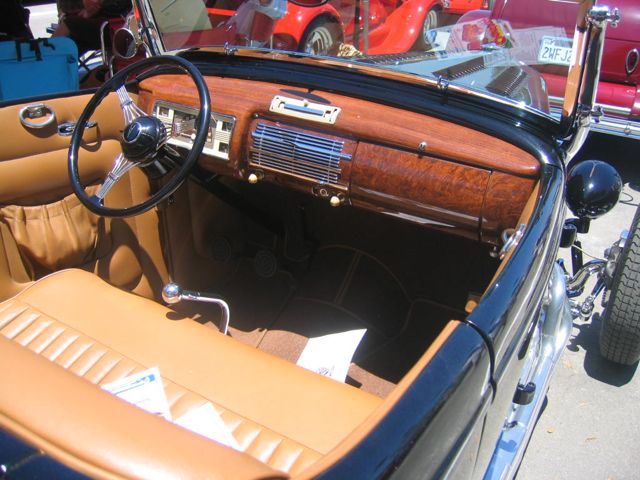 Just to show you that a 40 dash fits nicely in a Deuce have a look at this one. Â The dash has been cut on the ends not through the middle. Â I think Andre would like one like this. 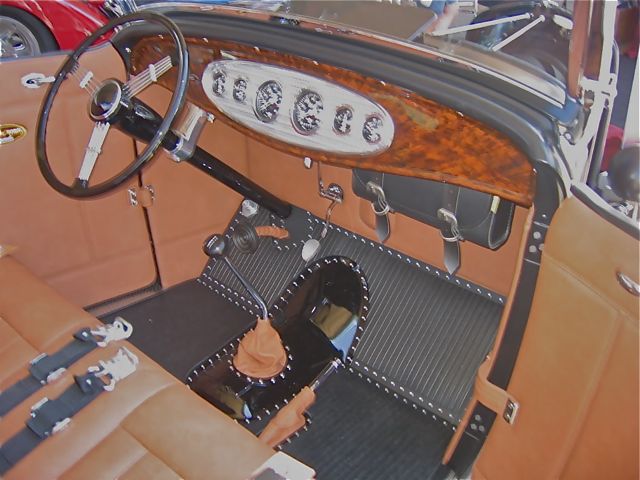 For a relatively small cockpit this Deuce has a lot going on. Â Note leather pouch under dash for glove box. 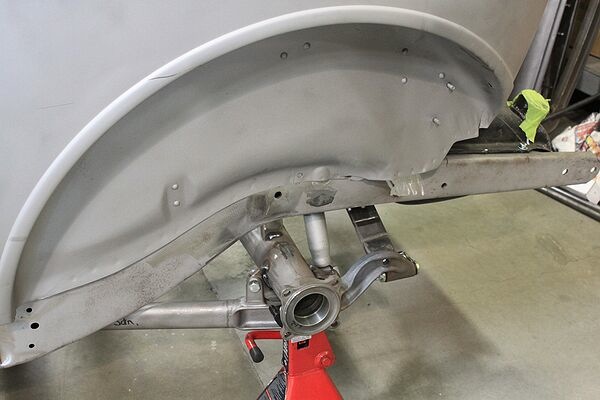 Roy had the Hot Rod Works convert the 40 housings to a pull out axle but retaining the Lincoln backing plate bolt pattern. Â The 36 wishbones need a top mounted support which they also offer. Â This set up is not cheap but retains the old flavor with modern components. Â I have to think the ride would be a little choppy with this set up…but it sure looks good to me. 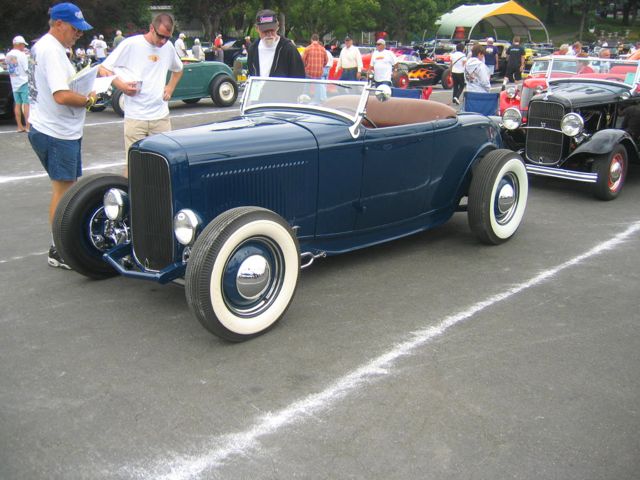 Buddy has owned this one a long time and I have always admired the car. Â TRJ did a full feature on the car and builder and explained the low rear stance. Â If you look closely you can see the Z’d chassis.