I looked out the window and could see the driveway was still wet and the sky was real dark which told me it was going to be another rainy day. Â I always like to travel to someone’s garage or shop on thursdays even if it is raining. Â I went for my morning walk and while walking I received a call from Bob who wanted me to come over and look at his wiring job in his new roadster. Â I said fine, as yesterday’s blog was about wiring. Â I told him to meet me at the “Office” and I would go with him and take some pictures. Â The sky was still very dark but no rain was coming down by the time I arrived at the “Office”. Â The gang was outside looking at Scott’s 36 3 window coupe acquisition he drug home from Texas. Â I don’t recall seeing many Buicks in my time but this one is very nice and original. Â After coffee, Bob and I headed over to his shop to look at the roadster. Â He is making great progress and hopes to drive it to the LARS in June. Â He is using an EZ wiring kit with a really small terminal. Â He also had a Painless kit that he did not use and offered it to me for my delivery for a reasonable price.

I received lots of comments on yesterday’s blog. Â Many people have used the panels featured and even sent in some photos of their wiring jobs. Â I think they all agree a good wiring job is high on the list for having a dependable driving hot rod. Â Nothing could be worse than having your car break down on the highway for a simple loose wire that was installed improperly. Â I even had one reader tell me he solders every connection prior to installation. Â I have never done that due to the fear of making the connection brittle. Â Maybe I will try a few this time to see how it works.

The sun just came out so I think I will head to the BBQ joint for lunch. 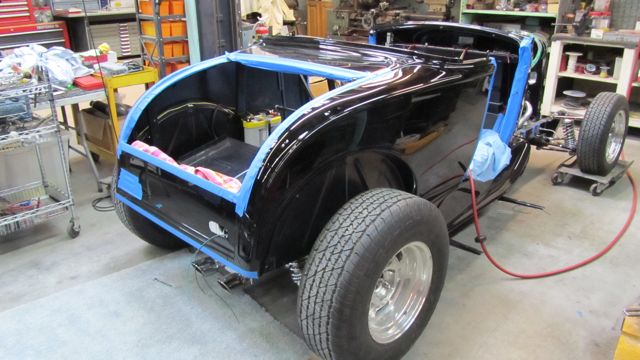 Bob has his crew working at nights on the roadster and they are making good progress. Â He is shooting for Father’s Day for the maiden voyage. Â Note blue painters tape to keep from scratching the corners of the openings. 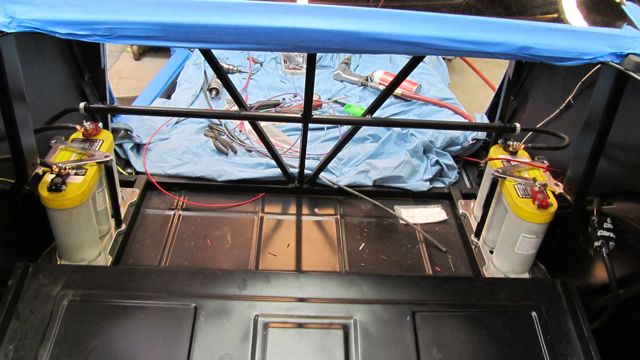 Bob wanted maximum space in the rumble seat area for his grandkids and installed two 6 volt Optima batteries hooked in a series to solve his problem Â The battery cable was run through the black conduit pipe welded to the rear seat brace. Â Upholstery panels will cover batteries. 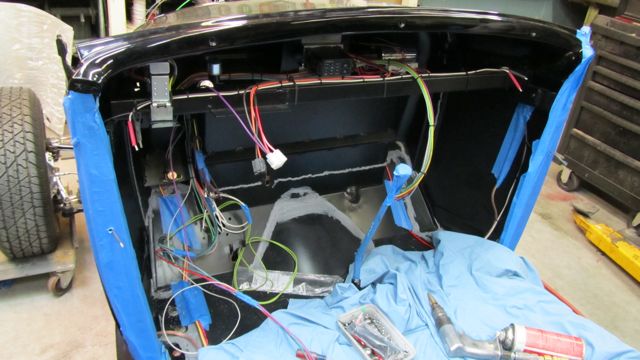 This photo shows the EZ-wiring module installed on the firewall. Â All of the wires have been run to the various components and are ready to be connected. Â Looms were made prior to installing in the car. 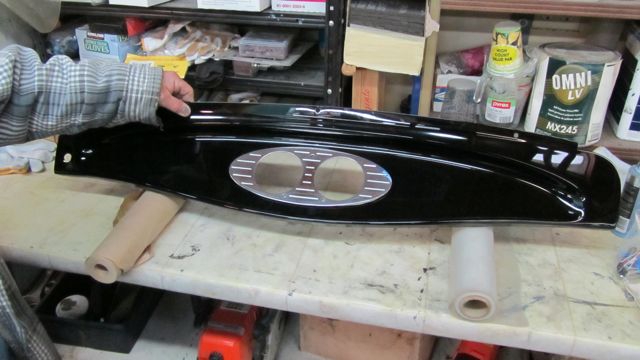 The dash has been rubbed out and the new gauge panel installed. Â The gauges are next on the list for tonight’s workers. 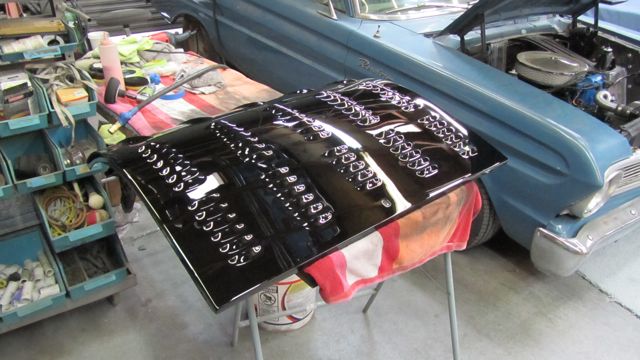 The rear deck lid is now finished and is a real piece of art. Â I think you would be amazed at how much time and money went into this decklid. Â The lid went back and forth to Brookville, Rootlieb and the body shop. Â The louvers are bonded to the decklid with the GM magic adhesive. 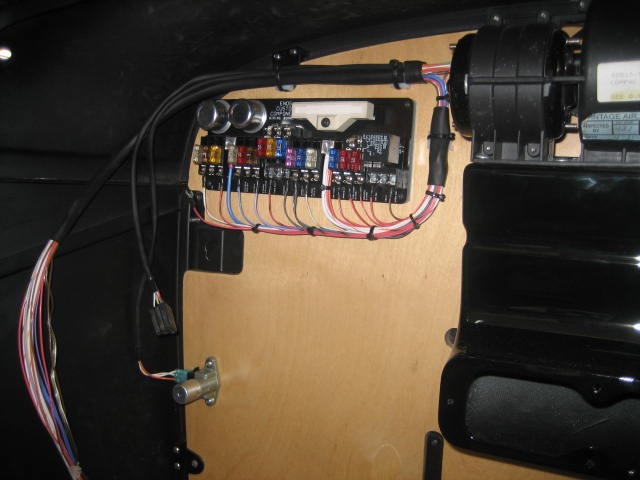 Phil sent in a real professional wiring job he had done in his roadster. Â This is the popular Enos panel with all wires ending in GM plugs. Â The heater is a Moal unit and works great on those cold trips. 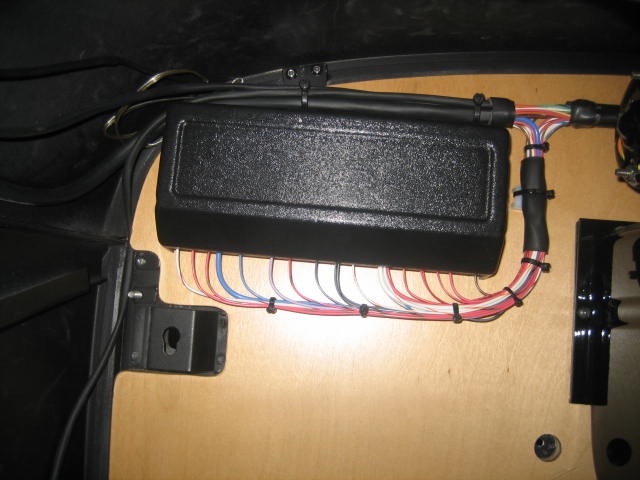 The Enos panel has a nice cover and looks very clean. Â Serviceability is easy with this unit. 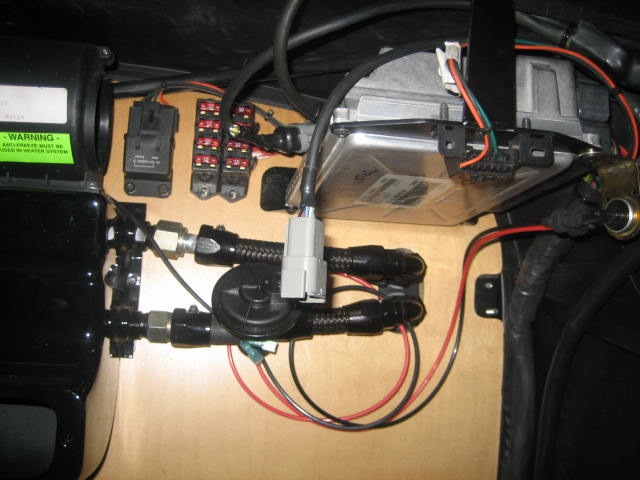 The Moal heater is installed and the hoses are routed through the firewall. Â Note the water valve which is critical to having the hot water flow through the heater. Â Ruby’s doesn’t work and so it only blows cold air not heat. 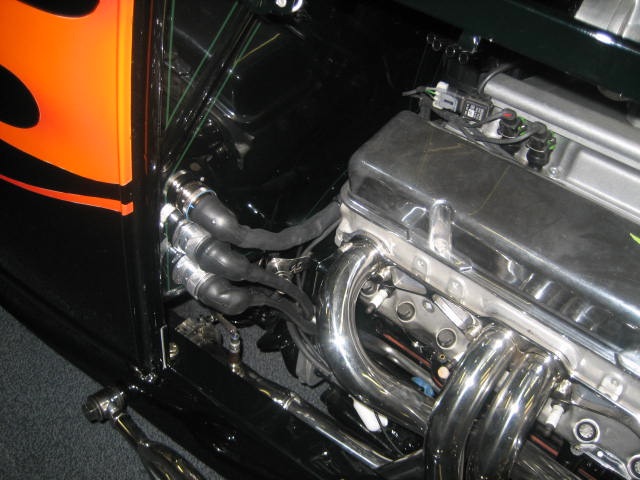 The wiring looms are routed through the firewall in a very sanitary manner. Â Note heat sensor on exhaust headers. Â This is a very nice roadster Phil owns. 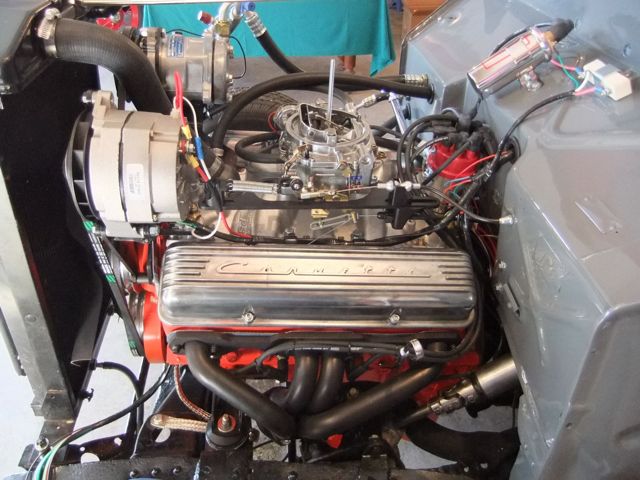 For you 1935 – 40 folks here is a nice set up using Â a dropped axle and a SBC. Â Note the CE motor mounts are moved forward to provide clearance for the headers and 525 steering box. Â The small distributor cap is required to clear the stock firewall. Â Sanderson makes the headers for this installation. 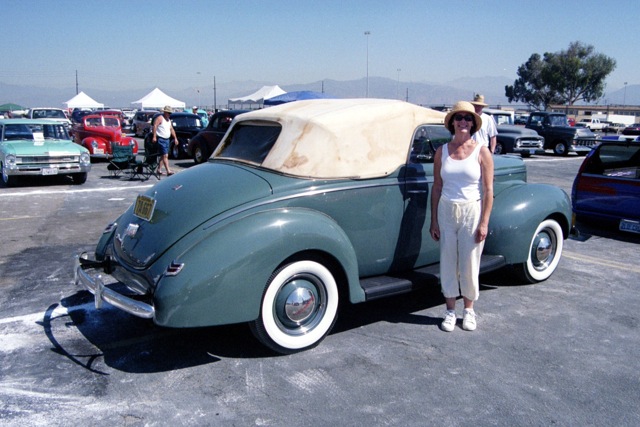 This photo was taken in 2002 at the LARS. Â Jenni, Chips wife, took a liking to Bob’s CMG 40 convert. Â This was a survivor car and should have been in my garage. Â She loves old cars. Â I know a fellow who “Hates Old Cars” named Steve. Â Can you imagine that?