IÂ spent the morning at Frantic’s with my friend Bob and we looked at the 35 truck he is building for a customer. Â Bob has a 37 and wants to build a driver shop truck using the original drivetrain. Â I told him about this truck with a SBC, 4 speed, nine inch, dropped axle and plenty of patina. Â He was impressed with the stance and dependability of this style of truck and now has to make up his mind which way to go with his build. Â Both will be functional and cool looking in his stable of cars. Â I personally like them both ways it is just a matter of your taste in hot rods. Â How many 350/350 does a man need?

My CE dropped steering arms came today and I installed them to see how they fit. Â I have never used these bolt through style previously and thought I would try a set as the bolt through design appealed to my engineering background. Â I had seen a set at Frantic’s and noticed that the arm eye is not parallel to the ground which bothered me. Â Mine fit the same way and I will either mill the mounting surface or bend the arms so they are perpendicular to the ground. Â Fred said it would not hurt anything but I will have to change mine. Â They are forged and look great on the dropped axle. Â I finished up the lowering blocks and I am now waiting on the long u-bolts to complete the rear end installation sans shocks. Â I was not aware of all the different types of U-bolts available and wanted the heat treated ones used in the sport truck industry. Â I visited my local truck suspension shop and purchased the best they had to offer. Â I paid too much but they are super strong and should provide many miles of safe driving.

I had a report from a reader who saw the Medley coupe and said it was really seriously damaged during the fire and will need a top notch metal man to save it. Â Fire can really warp the thin sheet metal. Â I will follow the car to see how they solve the problem. 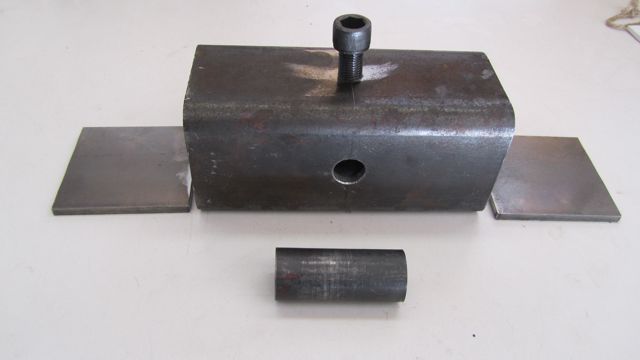 Here is a photo of the steel lowering blocks I made for Andre. Â I will box the ends with the 3/16″steel when all has been fitted to the springs. Â The top bolt is a 7/16′ Allen head which screws into the block and tube shown. Â The spring side of the block has been drilled for the 9/16′ spring bolt which fits up inside the tube. Â I am hoping all this set up will be super strong. Â Don’t ask about the hole in the side. Â It will be welded up during prep work. 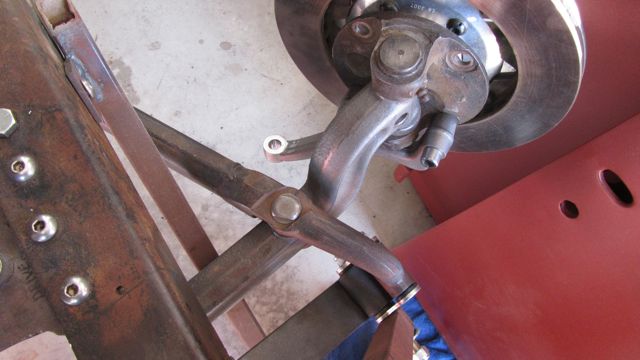 Here is the driver’s side lower steering arm installed with some Allen head bolts which I have machined to a smooth surface. Â Note the super axle clearance with this design. 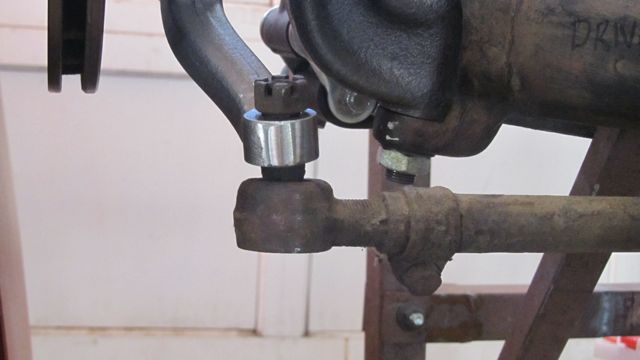 I used the stock tie rod to mock up the arms and this photo shows the eye tilting upward about 20 degrees. Â I don’t think this is correct but CE said it is. 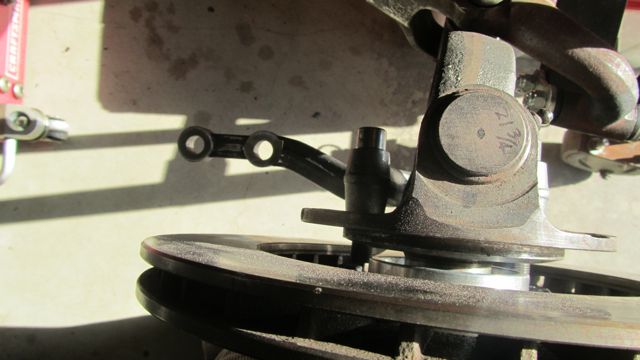 The passenger side has the same inclination so they must design the arms that way for some reason. Â I will change them to my liking. 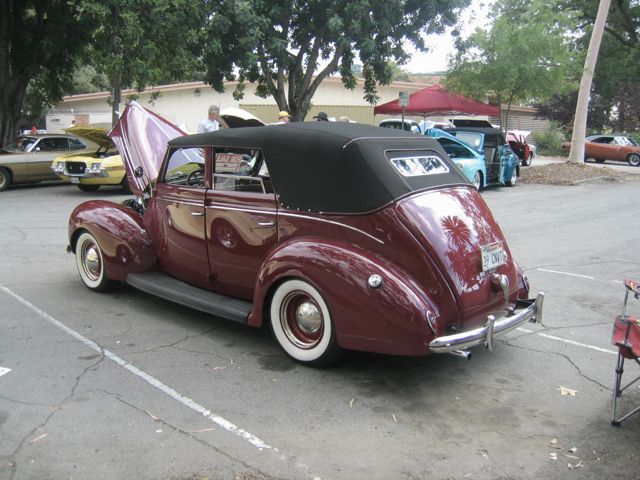 My neighbor bid on this tub at BJ a few years ago and quit at $65K. Â Gabe has had it for sale for many years as he has two 39 tubs. 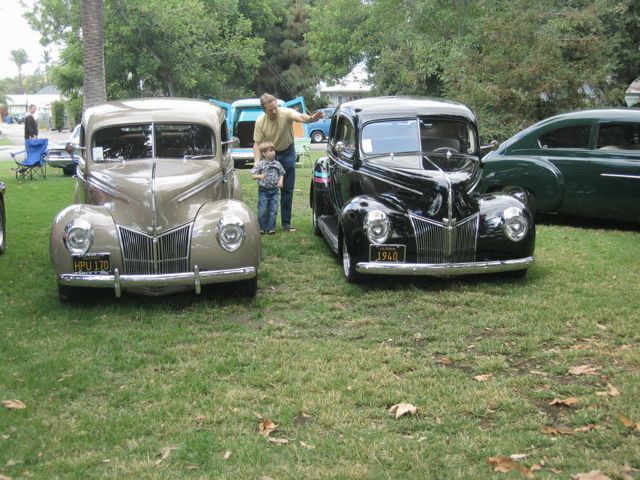 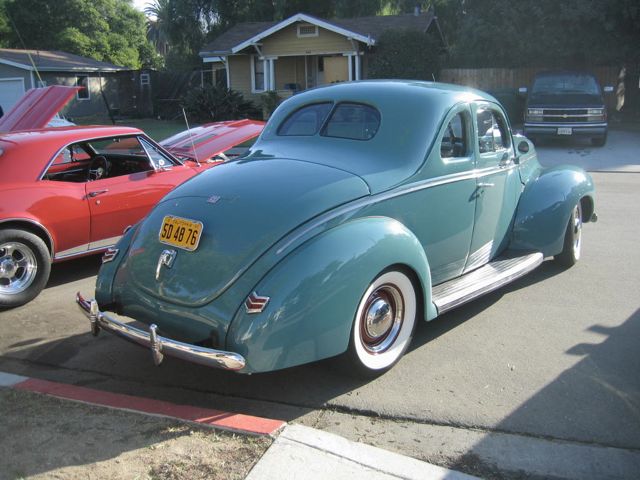 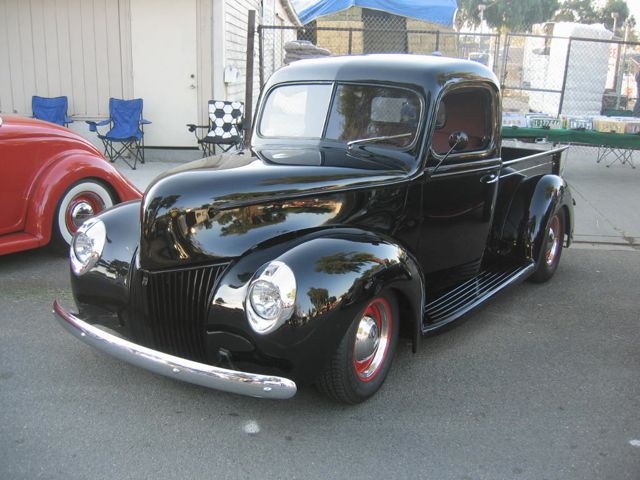 A super black 40 pickup has the standard grille with a completely different cowl and hood set up. Â A passenger car front end can be adapted but it is a lot of work and not worth the effort in my mind. Â My rule on forties is leave the outside alone and just shine the paint. 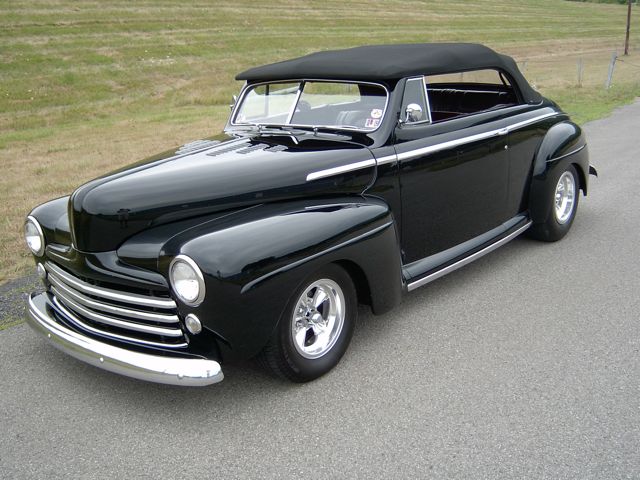 I fell in love with Jim Cherry’s Â 47 rag when he drove it to the NSRA Nationals in Minneapolis in the 80’s. Â He was always ahead of the curve and still is. 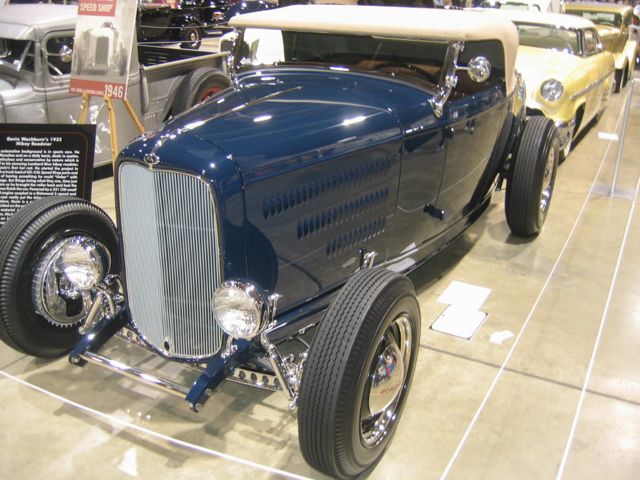 One of my all time favorites is this SO-CAL built blue roadster. Â A very basic car with lots of class and style. 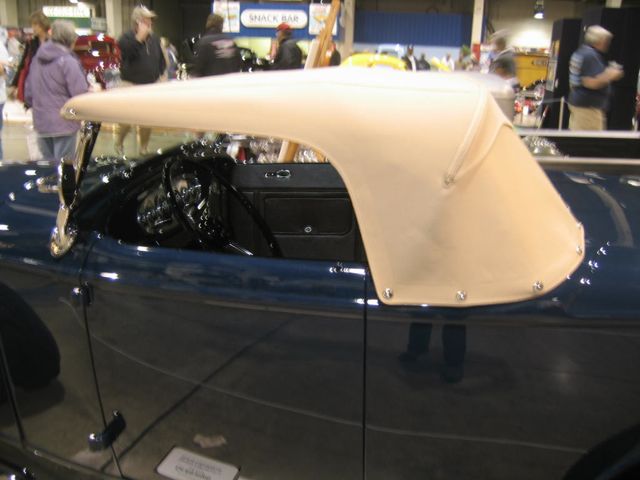 We tried to copy this top for Bob O’s roadster and I still think it is one of the best style tops around.