I went to the doctor this morning and had a good discussion with him on the high cost of healthcare today. Â He had a good explanation that I will share with you. Â Your main doctor listens to your aliments and then sends you for a test or procedure to help confirm the diagnosis. Â The cost of the procedure is astronomical compared to the doctor’s office visit. Â You could apply that scenario to your hot rod also. Â You build your car and think you have everything correct and then you discover a problem and need to have a procedure done. Â This second step is the one that usually cost you the bucks. Â I have a couple of examples to help you with where I am going.

The first experience is a home builder completes his dream car, takes it for a drive and finds out that he did something wrong or forgot to do something right. Â Tom sent in some photos of his friends car that was on its maiden voyage and had a horrific problem due to a rear wheel coming off. Â The second problem is a relatively new built coupe experienced a terrible experience when the driver’s door came off while entering the freeway. Â Both incidents may have been prevented if they would have had the procedure done prior to making the drive. Â I think a second opinion (procedure) on your build is a good safety measure we all should take on our hot rods. Â I don’t know if we would catch everything but at least we tried in the event of an accident. Â Fortunately, no one was injured and the cars can be saved or replaced.

I left the doctor’s office with some prescriptions for a couple of procedures that may not be required but will provide me with a good sound diagnosis for the symptoms. Â I think I will have a procedure done on Lucy to make sure I have not overlooked any symptoms that may fail on its initial voyage. Â The “Adjustment Bureau” has already been to my house on Lucy. 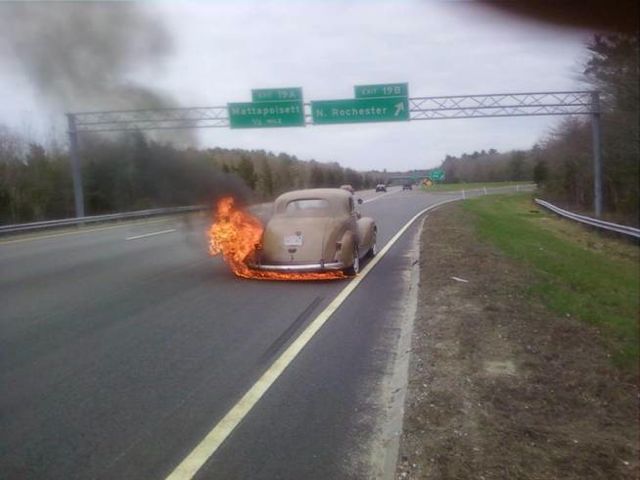 This is a photo of the maiden voyage for a Plymouth coupe that lost all five lug nuts on the rear axle. Â This caused the wheel to hit the fuel tank which creating the fire you see coming out from under the car. 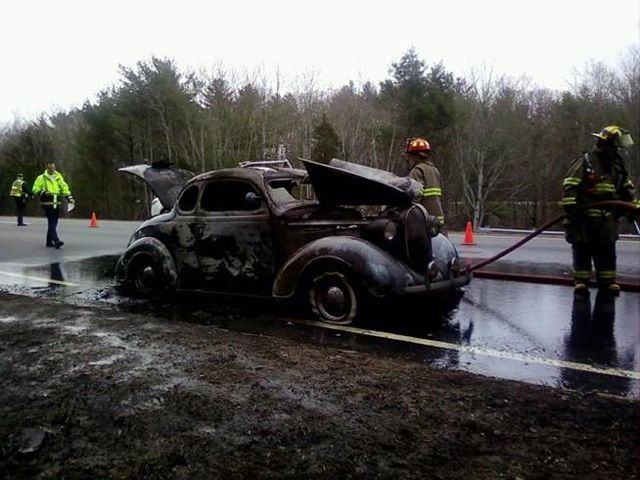 Not a pretty site and a complete loss of a wonderful old car. Â No one was injured. 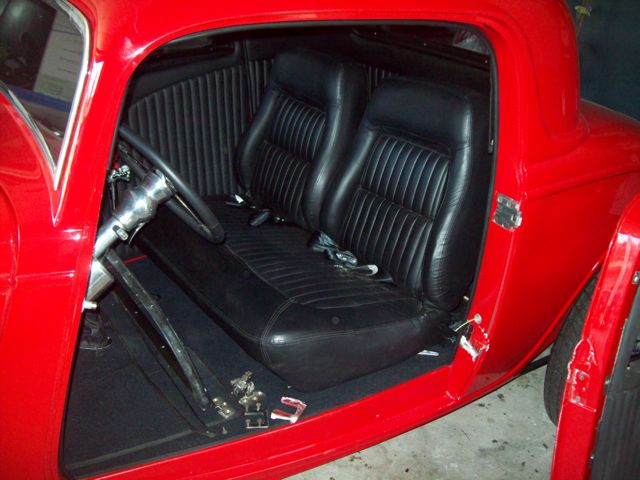 The suicide door did not have a safety latch in the front portion and while entering the freeway the driver’s door came completely off the car. Â The hinges tore loose from the body due to the force of the wind on the rear hinged door. 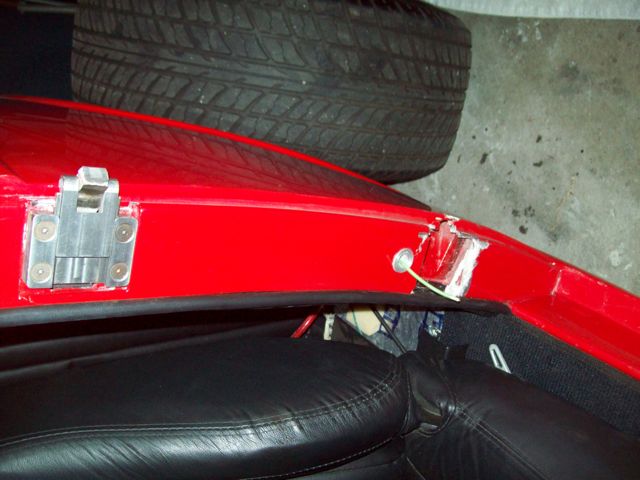 The door post showed signs of a serious failure in the lower hinge area. 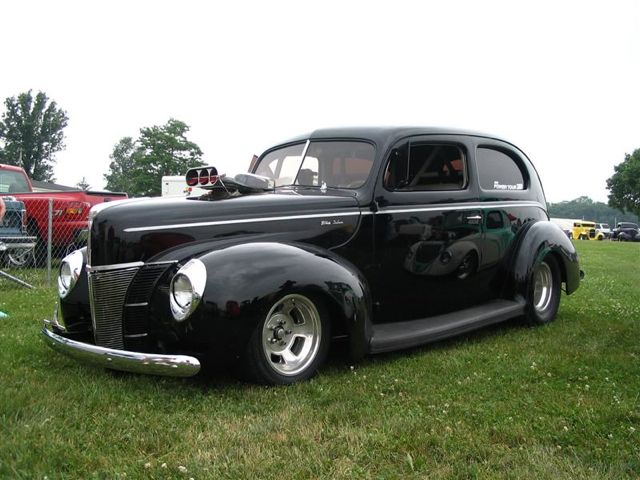 Jerry showed the crowd how a huge 40 sedan could lift the right front wheel off the ground and still keep the doors shut. 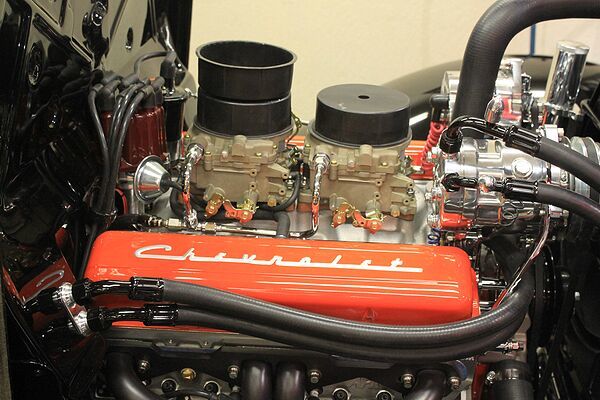 I really think it is hard to beat the early Chevy valve covers for the early 60’s look. Â They re-pop these units but the real deals are cheap and easy to find at swap meets. Â This is Brizio build 3 window coupe. 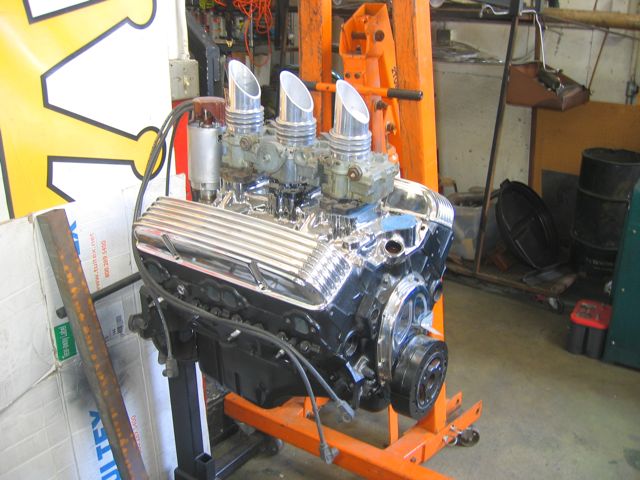 The late model heads would look better if they were “Camel Humps” but the front oil fill and non-breather valve covers really fit the early theme.

The Elco Twin heads are re-pops and make most people take a second look. Â The distributor is really cool looking and is must have for this set up. Â HHR build. 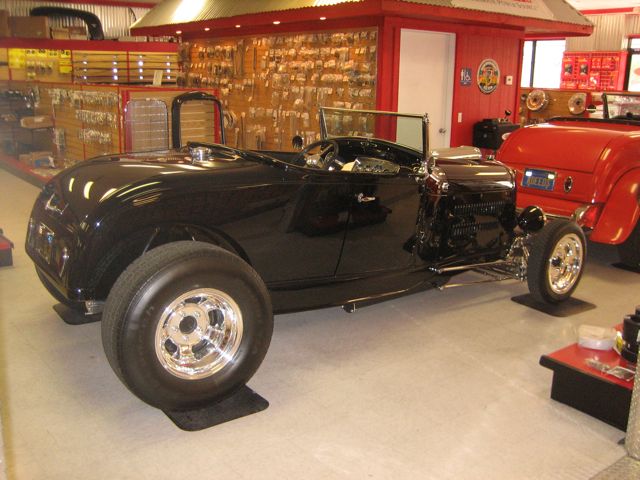 Yes, it is hard to beat a little 29 hiboy roadster with polished Halibrands and a huffer sticking through the hood. 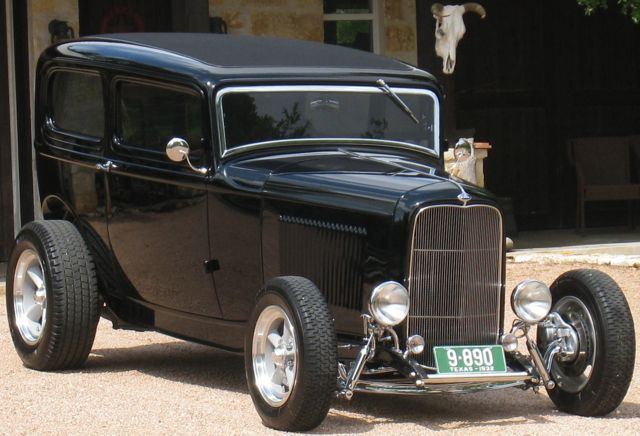 I am back thinking about hiboy sedans again. Â Maybe Pete will have his on the road soon. Â A slight chop (2 inches) looks good and makes one wonder what is different.