I was reading the business section today in the LA Times which features a new car evaluation once a week. Today’s feature was Kia who has introduced a luxury car to compete with Mercedes and BMW. Remember Kia is an economical car that has a lifetime warranty and is sold at a throw away price. The company builds cars in American with American workers and still has a price point under most manufacturers. The new car is a copy of the other brands and is priced in the $55,000 dollar range. My background was in marketing and sales so my initial thoughts were they are making a big mistake, but then I remembered Toyota who essentially did the same thing in the 70’s. Have you heard of the Lexus and the demise of Cadillac and Lincoln in the 80-90’s. My point is foreign companies tend to think about a 15 year return and American companies and their CEO’s think about instant market share rather than building the demand for their products. The average purchaser of a luxury brand losses about 20% the minute they drive it off the lot and many are leased for an even greater initial loss.

The hot rod has seen a great appreciation in value over the last decade only to fall in recent months. The owners of these cars made an investment thinking it was safe and at least they could recover 90 percent their investment whenever they wanted to. Many people flipped cars like you do houses in California. The opportunity to make money on cars is still there and you need to think of the foreign manufacturers who are very patient in growing their product line. If you have purchased a car or about to make a buying decision then make sure you know what the market is currently and what the predictions are for the next 5 years.

For example, let’s take a Woody that was purchased or built in the low six figures in the last few years. If you needed to sell today, you might only recover 75% of you investment due to tough economic times and tight credit. If you hold on to that original Woody you will probably recover most of your investment as the economy improves. Remember there are no guarantee’s on ROI in the car market. Most new cars loose over 60% of their value in 3 years and their owners are happy with their investment. So why do Hot Rodder’s expect 110% recover on their investment…because in the past they could always demand top dollar and find a buyer. The market will come back so just enjoy your ride, keep up the maintenance and wait for the demand to return. 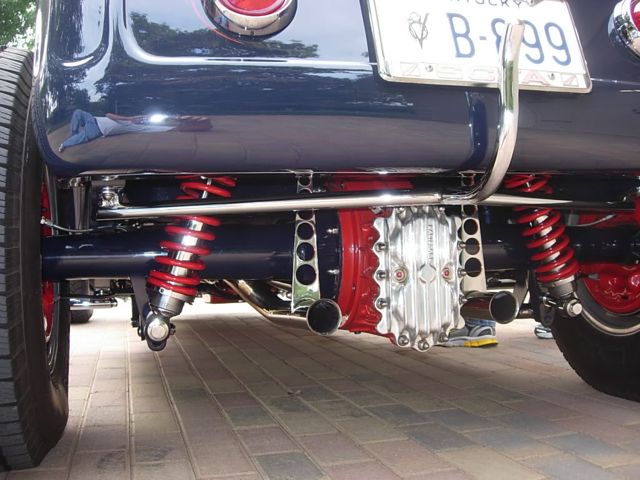 I still love QC rear ends. This Champ with adapters has been detailed to the maximum. Note the painted main housing and adapters with a polished cover. The overall detail on the car looks really well thought out. 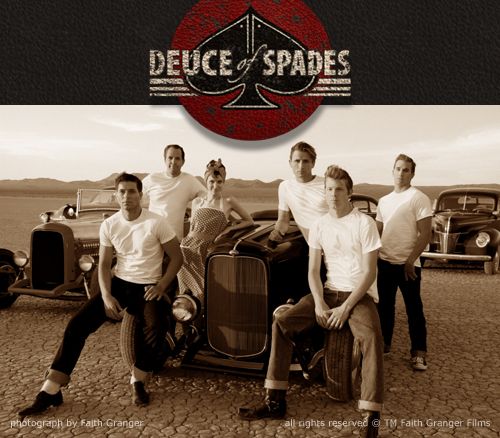 One of my hero’s, Faith Granger has put together “Deuce of Spades” for all of us to enjoy. Please google her site and order one of her CD’s and T-Shirts. She has done this film on her own and through her tenacity made it happen. Congratulations Faith and her stars. This should be a sequel to “Rebel without a Cause.” 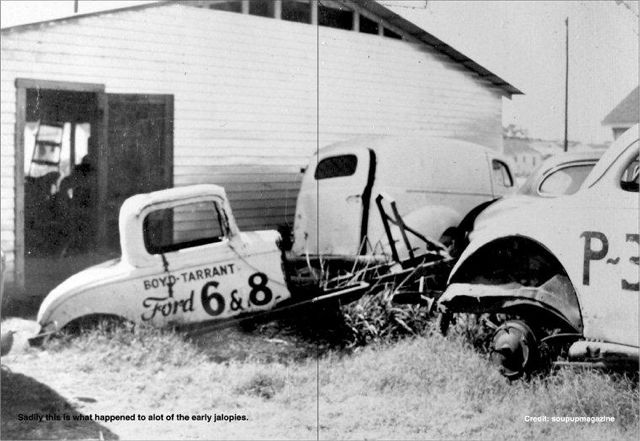 John knows I love Sedan Deliveries so he sends along some photos of why there are not many left. The old Fords were certainly abused in the early days. 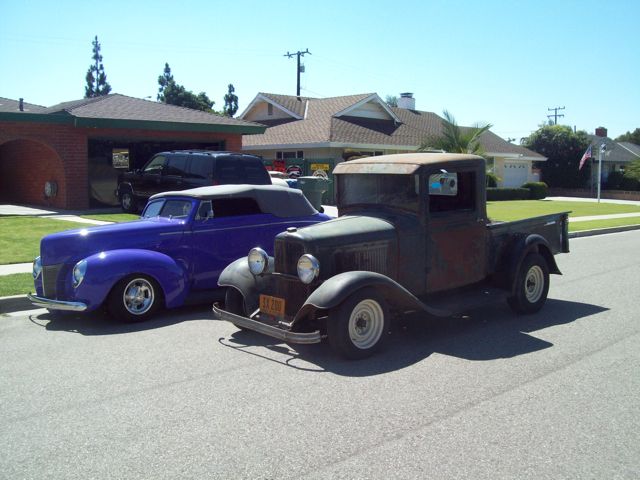 My high school buddy Dave, has more cars than most and just completed another one. The photo is of his maiden voyage in his Deuce (rat) pickup truck. He needs some rear fenders… if you know of any let me know. Nice truck Dave…can we go to Perry’s or the Steak and Shake tonight? 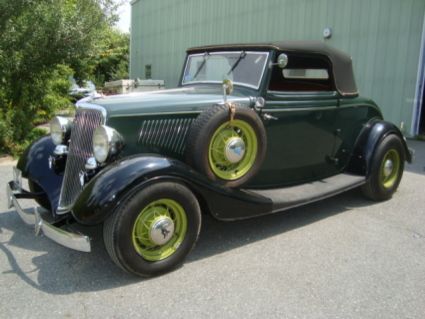 Mr. Williams has found another treasure is his pursuit to purchase all models of the model 40 he can find. Certainly a rare model this Cabriolet looks to be a great find. I will go take a look soon. 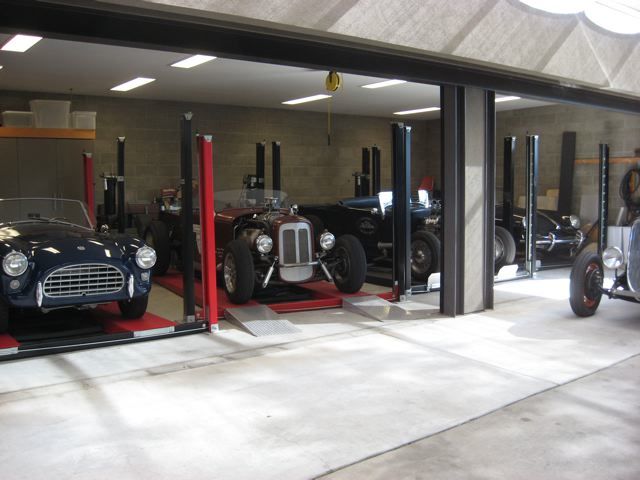 Sandy attended the South Pasadena show this past weekend and sent along some great photos. This is one of Ron’s garages. It would be nice to have a lift for each car and a building to house them in. 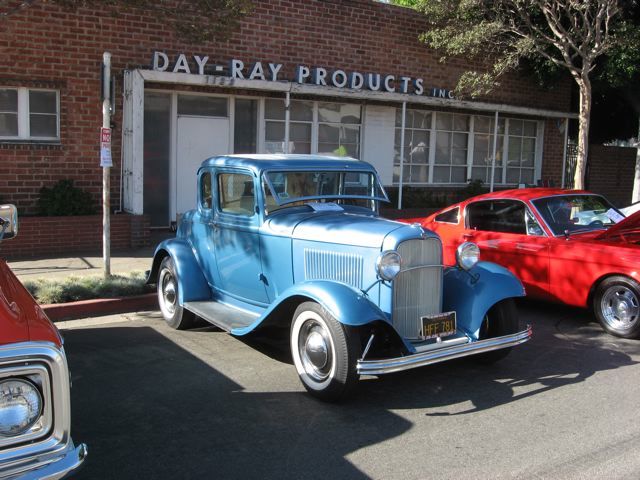 Old school 5 window reminds me of my high school car. Light blue was a cool color for a coupe in my early days. The white tuck and roll was another must have to be cool. Interiors were about $200 -$300 bucks in the 50’s. 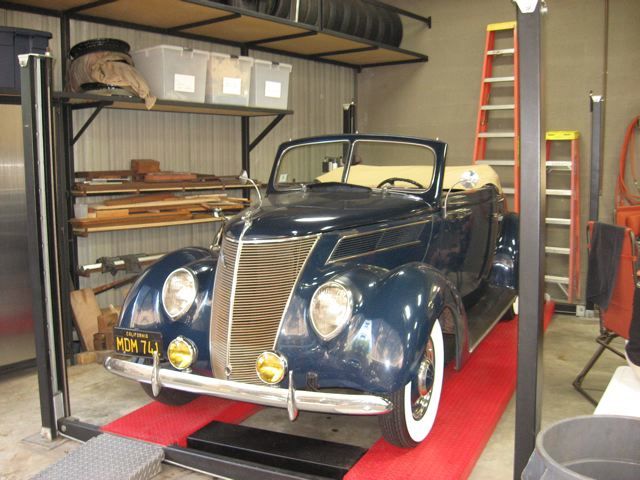 Ron has a love for stock cars also. This little 37 was a cherry pie and Bob sold it to him a few months ago. He should have kept this one to replace his 37 sedan he sold a few years ago. 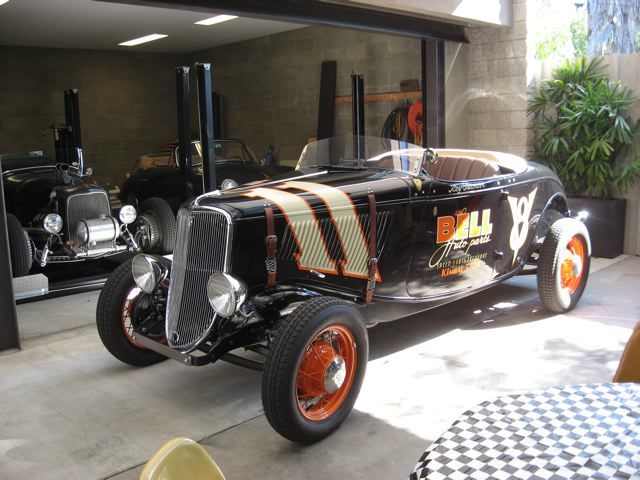 Ron also likes early road racers and purchased Don’s one off 33 a few years ago. I really think this is one of the nicest clones of the early model 40’s that has been done. The paint and lettering are the best I have seen. 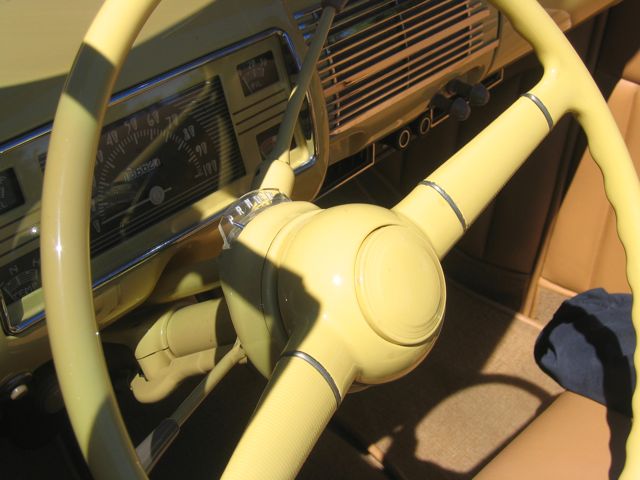 I like F-100 columns in a Forty but they require an adapter to look correct. This one looks pretty good under the automatic shifter indicator. 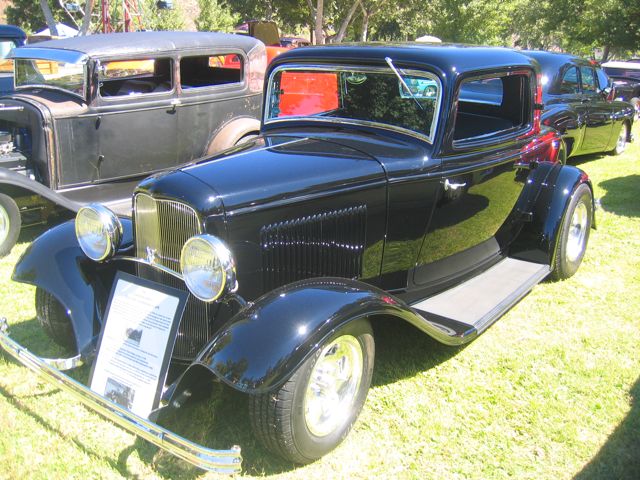 One car that really grabbed my attention was this little black 3 window that has been in the family since 1952. I will feature some photos and the history later this week.