Today’s topic is about chassis’s that I have been involved with during my initial chassis work in 1968 up to today. I started my Hot Rod chassis building when I returned from the service in 1968. We were renting a house with a one car garage. I drug my five-window home from my grandma’s house and stored it in this garage, while I began building my Henry Luzader clone. I drove my 34 Ford sedan delivery to work everyday from Birmingham to Pontiac just a few miles up Woodward Avenue and the famous Ted’s Drive In. Winters were cold and garage time was limited but I managed to work on the chassis and save my money for some much needed Deuce parts.

Early chassis were simple unless you were into drag racing, which I was at the time. I knew of Logghe Chassis and visited them on Saturday’s to discuss my project. Gratiot Auto Supply was also one of my regular stops to purchase some motor parts. The original chassis was junk so I purchased a real nice Deuce chassis for a hundred dollars and had it sandblasted. Rich at Logghe did the front coil-overs and Olds rear end and I did all the rest using the local welding shop for TIG welding. My ability during those days was limited to what my father had taught me with the old Lincoln buss box. The chassis turned out just fine and I started on the body when a very nice three-window became available. I purchased it and forgot about drag racing as my pocket book and new son wouldn’t support the hobby.

During the years from 1970-73 I built chassis using the popular Jaguar rear suspensions and Bell front axles from Andy’s in San Francisco. Super Bell would later come out with the four and five and one-half inch axles which I used exclusively as my friend Mike Martens was a dealer for them and a manufacturer of Deuce frame rails. I was transferred to Georgia and purchased a 34 Ford sedan which I installed the Super Bell axle and Jaguar rear axle. A 34 chassis is much easier to build due to the x-member and inner reinforcements. I made all the brackets and cross members in my garage on the weekends and even sold some to friends.

A move to Atlanta in 1976 provide me with a whole new group of Hot Rod friends in the Creeper’s Car Club, which I became president. Lewis Young was the chassis builder and I learned a lot from him about design and quality welding. Over the next few years my many moves prevented me from spending much time in the garage but when I moved to Los Angeles in 1984 that all changed. The likes of Chuck Lombard and Boyd Coddington swayed my taste from the very traditional style chassis I had been building. I had a couple of back surgeries earlier and riding in a straight axle car didn’t work with my broken body. Boyd and Chuck persuaded my to try the Boyd independent chassis by loaning me their cars for a period of time. I was hooked as were many more people. I couldn’t build these chassis myself so I purchased them from Boyd and had Chuck help me with the final assembly.

Pete Chapouris started SO-CAL and I was back on my original style chassis using I-beam axles, 9 inch Ford rear ends or QC’s and P&J components throughout. I moved up to the 1940 chassis in the 90’s and added the Heidt’s front end with the parallel rear leaf springs from TCI. I am still in that same mode today but driving Walt’s Boyd roadster has brought me back to reality about driving the “Back Roads” with our gang requires a decent ride at my age for both Jane and I. Pepe has the smooth ride and so does Lucky. I will always appreciate the Lobeck Model-A rear spring, QC, Buick drums and tube axle he brought foreword in the late 70’s, but I must listen to my body when it comes time to do some driving with my friends. I will admit that the Pete Eastwood buggy spring axle car I drove, rode really nice but I could never duplicate that ride in my builds. My hats off to the master.

I won’t change my logo to the Boyd’s IFS! 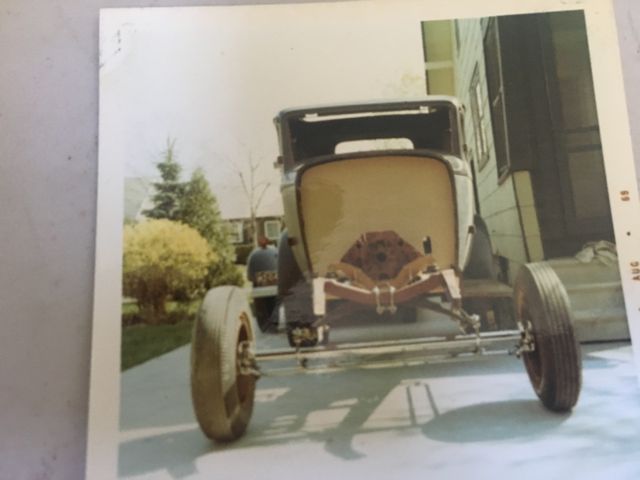 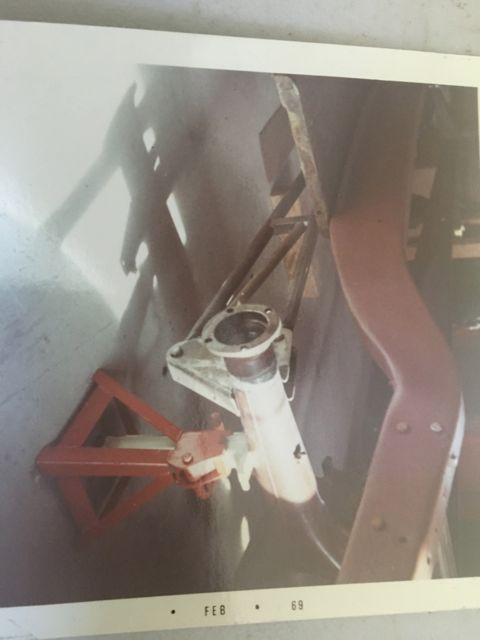 Logghe shortened the Olds housing and sold me the coil over brackets. 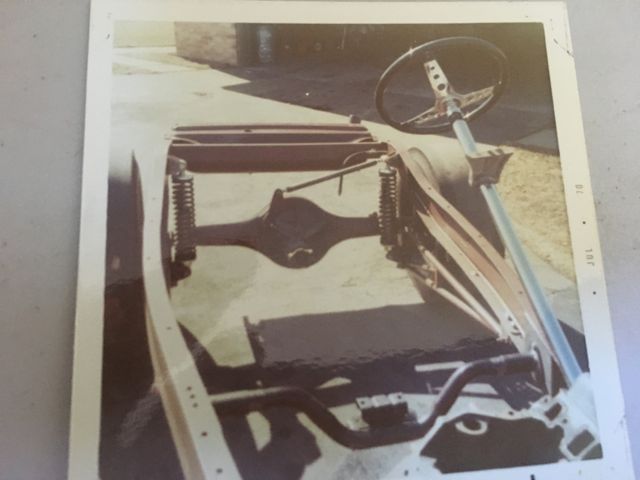 Olds rear axle with coil-overs in the rear. Home made ladder bars. Note the lack of boxing the frame in those days. This would have never worked. 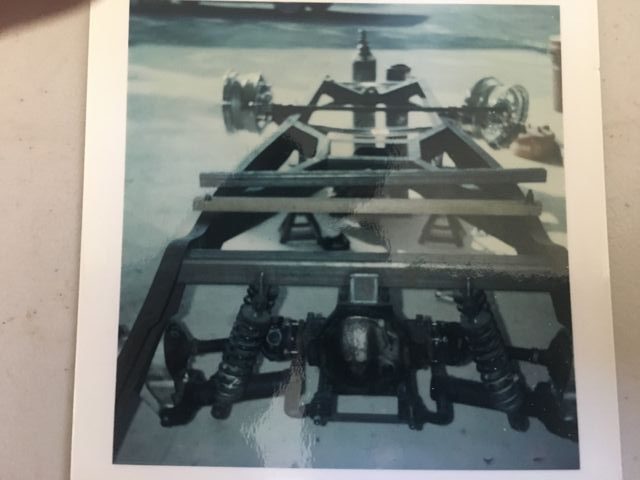 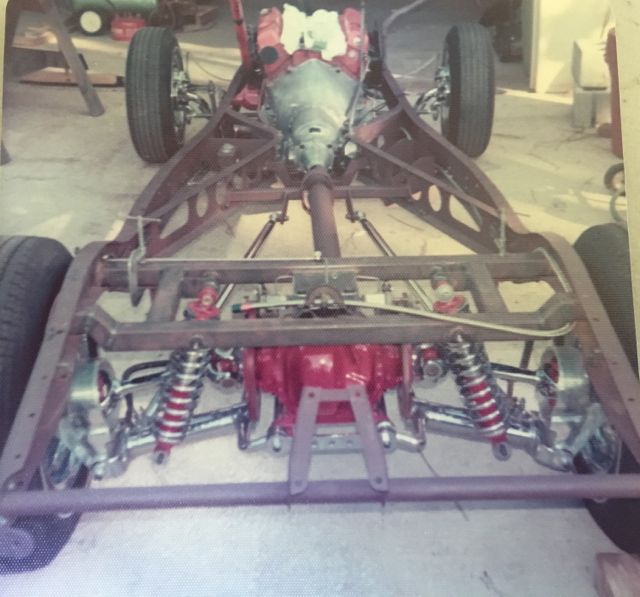 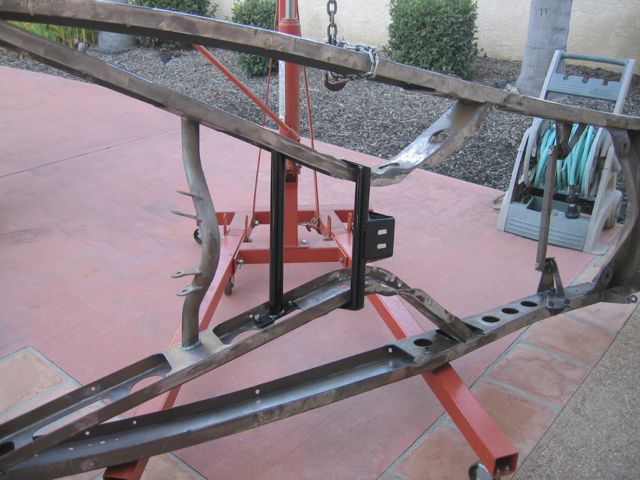 My love of the 34 chassis for the ease of building using P&J components. 1998 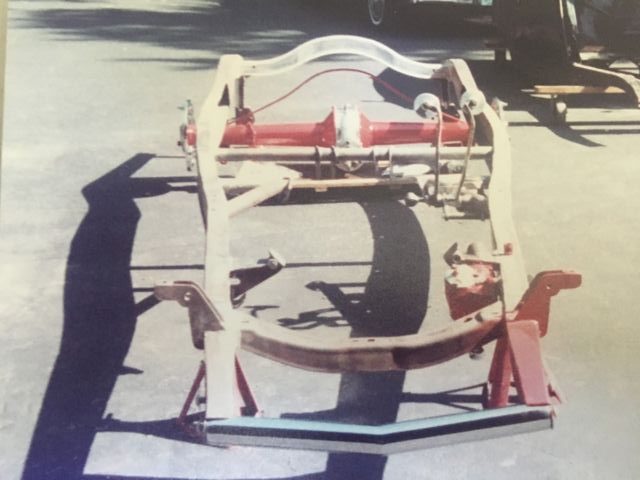 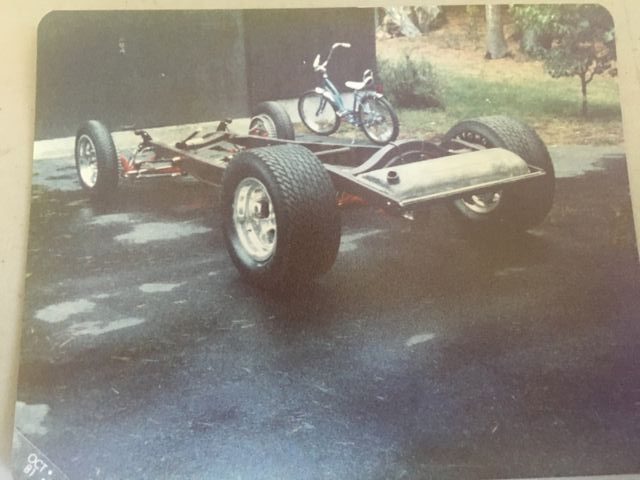 Wheels and tires cost more than the chassis in those days. 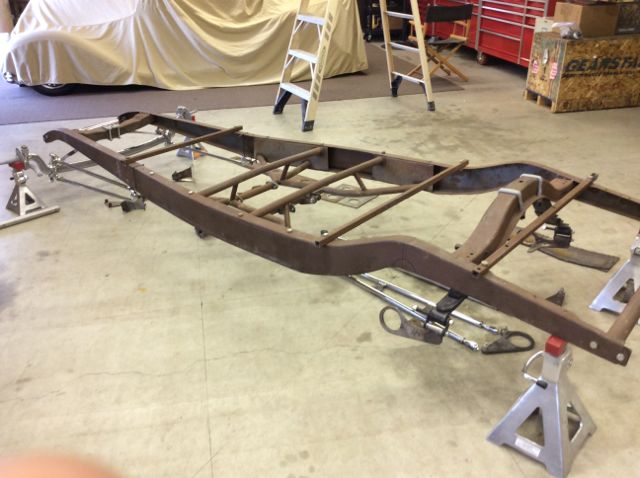 I have used the Deuce Factory, CSR center section in all my 32’s since coming to LA. It is the best design in my opinion 1983 – present. I make my own now. 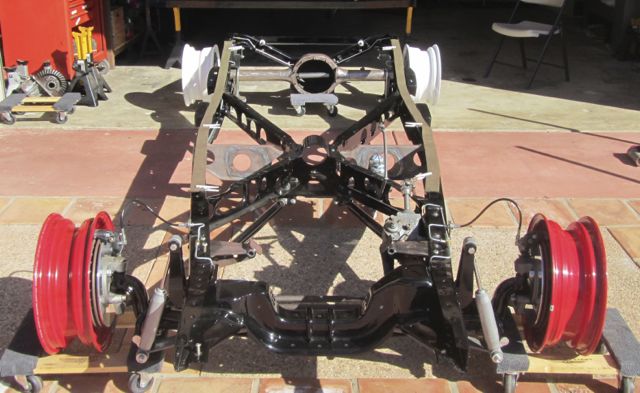 I have built several 40 Fords using this style and they ride O.K. but not like the Heidt’s 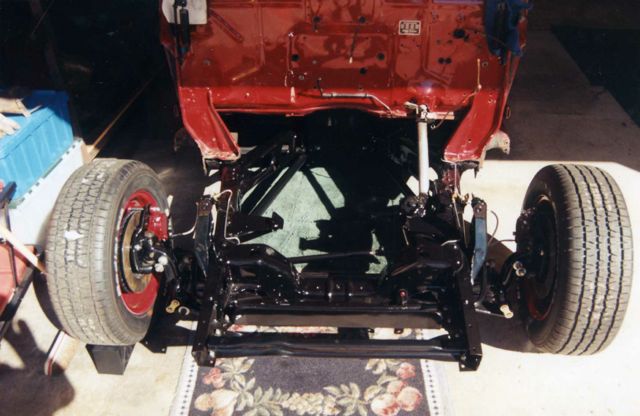 Prior to my third back surgery I put together a dropped axle 48 Ford convertible. 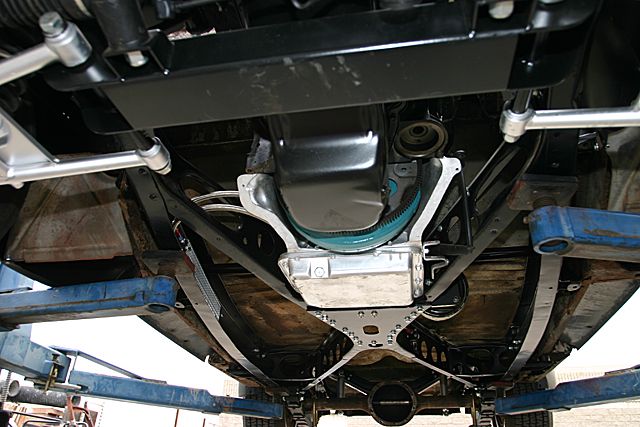 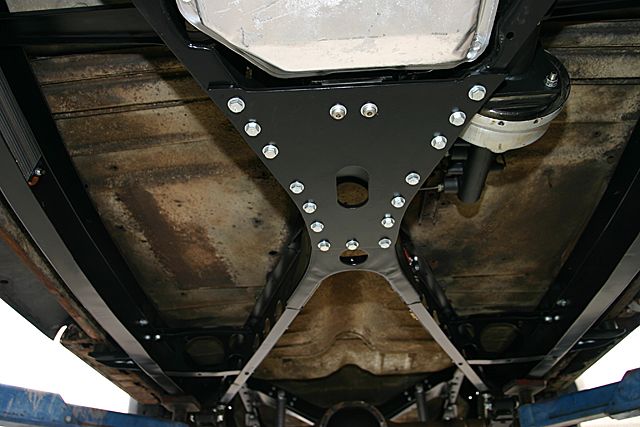 My first Heidt’s IFS on my 47 sedan delivery was after my back surgery. 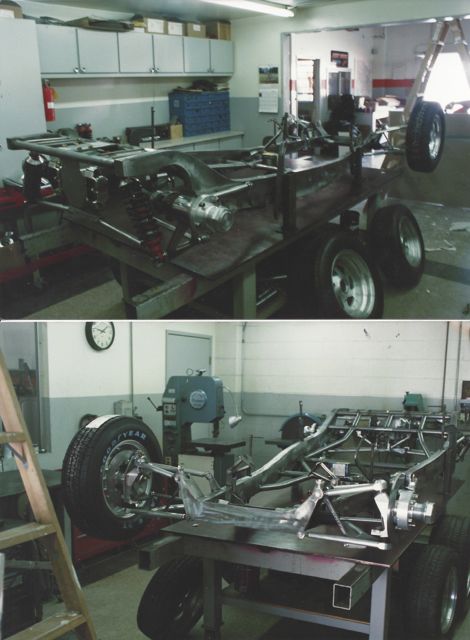 This photo is the under construction one by Larry at Boyds. I told Boyd to build me one after riding in Walt’s Boyd roadster. 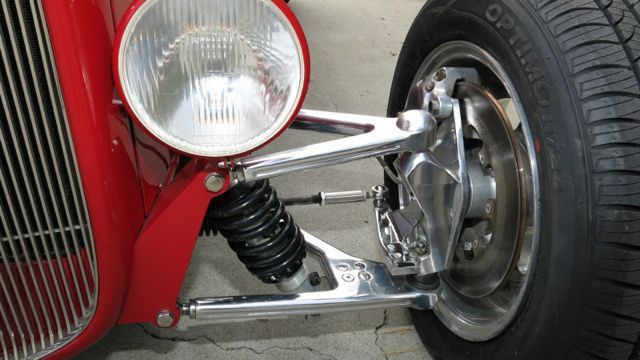 You can see that someone has made new tie rod ends which I will replace with the original style which are safer. 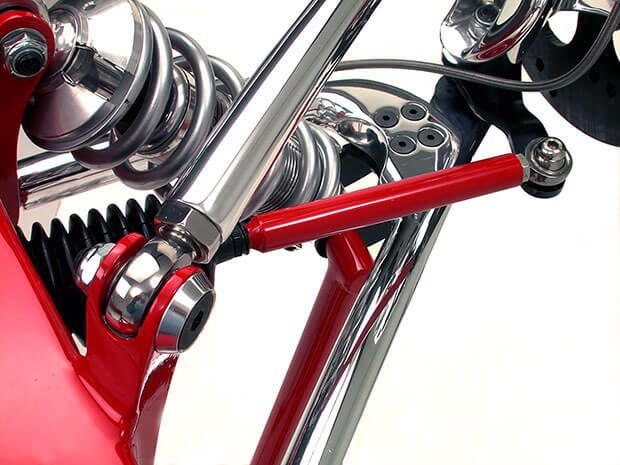 Boyd built his suspensions using coil-overs and rack & pinion steering. I am making some new tie rods now as shown in this photo. If anyone knows what year/model Fiat rack and pinion steering Boyd used I would like to know as I’m replacing this one. 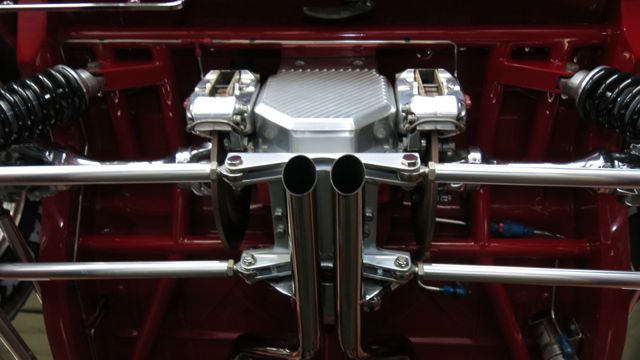 The rear ends are built around a steel Corvette center section and hand made uprights. The chassis are very stiff and excellent for a roadster. 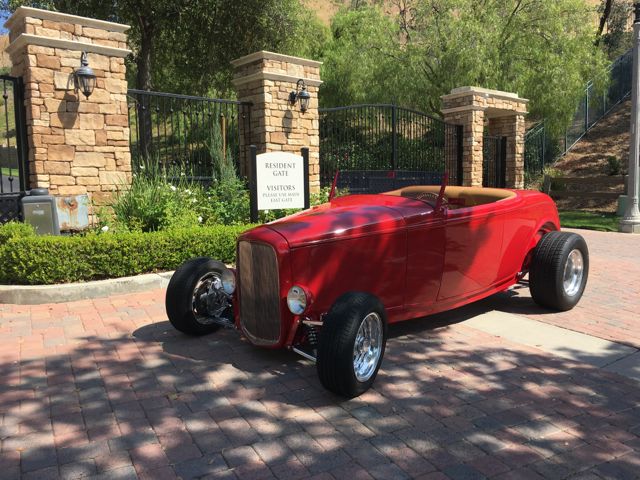 This is the style I had intended for mine but Jerry changed it to his taste. This car has a lot of provenance with me and Jane. Thanks Walt!