My friends and I left early in the morning for the Outriders Picnic at Irvine Lake. The trip took about two hours and it was a cold ride in the roadster (Pepe decided not to run properly.) We arrived and the place was already packed with Hot Rods and people. After parking, we began our tour of looking at all the cars that we enjoy the most  — pre 48 Fords. This show is one of the few where you can see these style of cars that were so popular in our early years right through the 90’s. Our friends had a nice Canopy set up so we could relax and enjoy some drinks and donuts.

Jane and I walked the entire show looking at all the cars and talking to people we hadn’t seem since last year along with meeting some new friends of Pewsplace. It takes all morning to see the cars and you walk your 10,000 steps without any problem. I checked out all the tops I could find and most were the popular Bop Top but a few were home-made which I studied at length. I have to re-do my header now that I looked at these tops. I love the beautiful paint jobs, interiors and over profile of the early Fords and later Chevrolets in attendance. I found an exact model of my first car which was a 1953 Chevrolet Bel Air hardtop in Blue and white. Great memories of that car which my father bought me when I was 16. Basically, there was something for everyone to enjoy looking get ideas for their own ride.

The event always attracts the people who have been attending this show for over 30 years and most still have their same car or added to their collection with a few more. The grassy lawn and layout provides a perfect venue for a car show that will accommodate 400 + cars easily. The band was great, lots of raffle prizes were given away and the BBQ was outstanding. Did I mention that free adult beverages and soft drinks were also provided. The members of the Outriders work real hard to satisfy the large numbers who attend and are to be congratulated on another fantastic show at Irvine lake. I look forward to next year and thank Walt for the tickets.

Lets look at some photos. 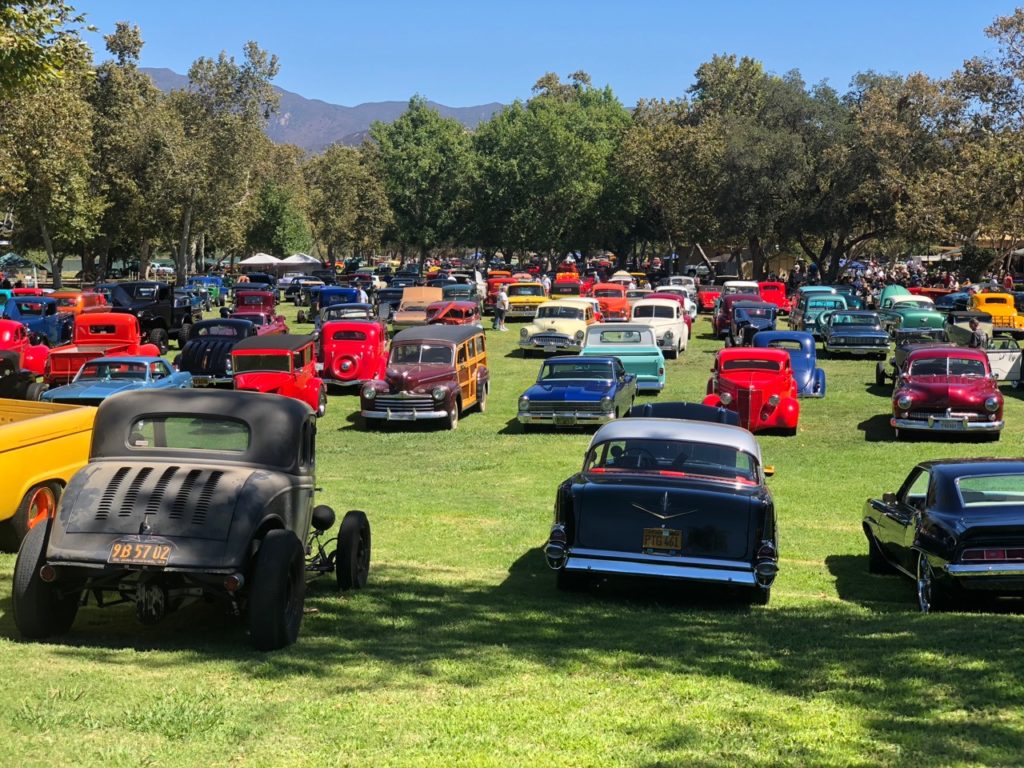 Early morning arrival found the place packed by 8:00 am. 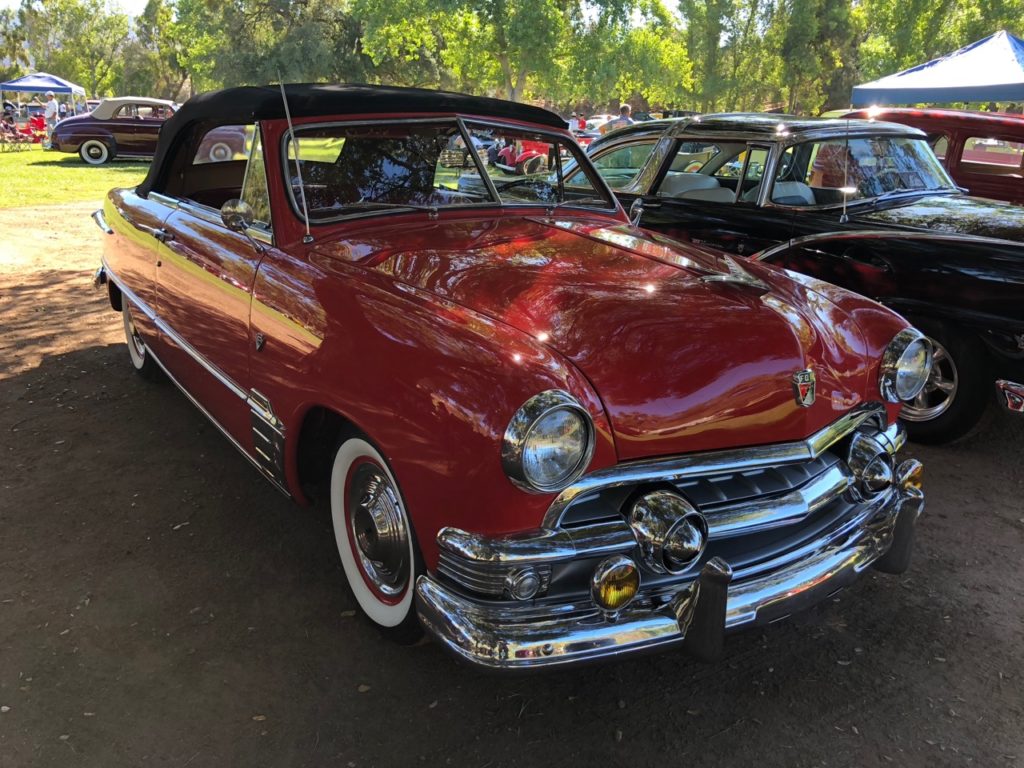 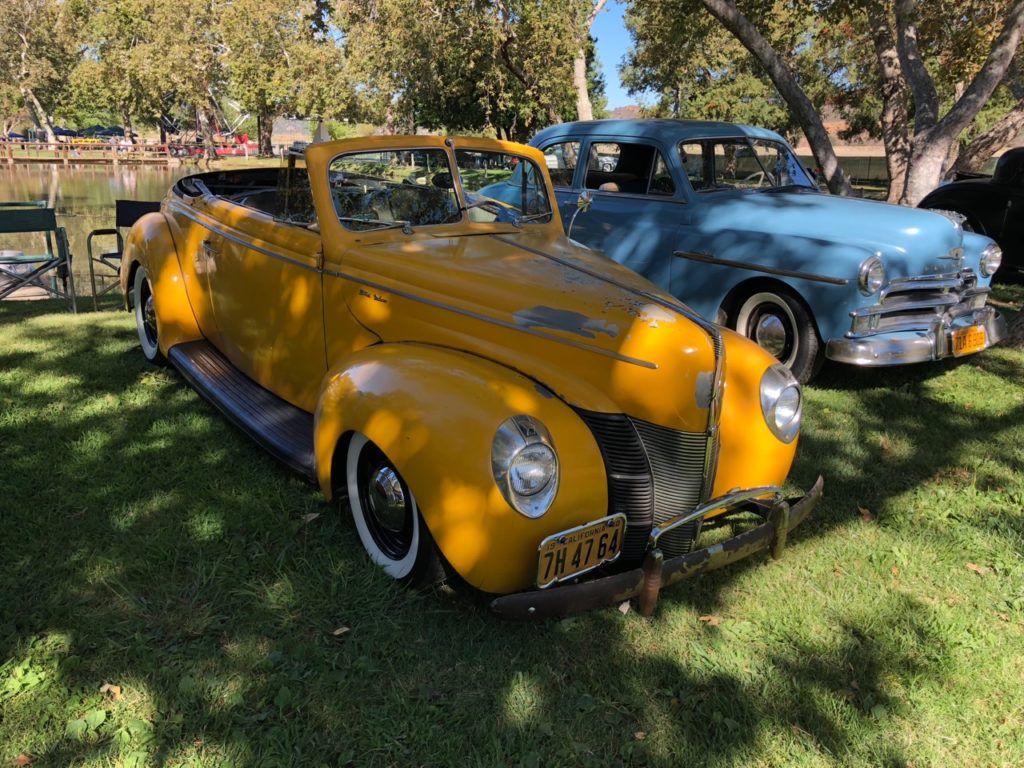 I also love 40 rag tops, so I stopped and talked to this fellow who told me it was done. And had never had the top up in all the years he has owned it. 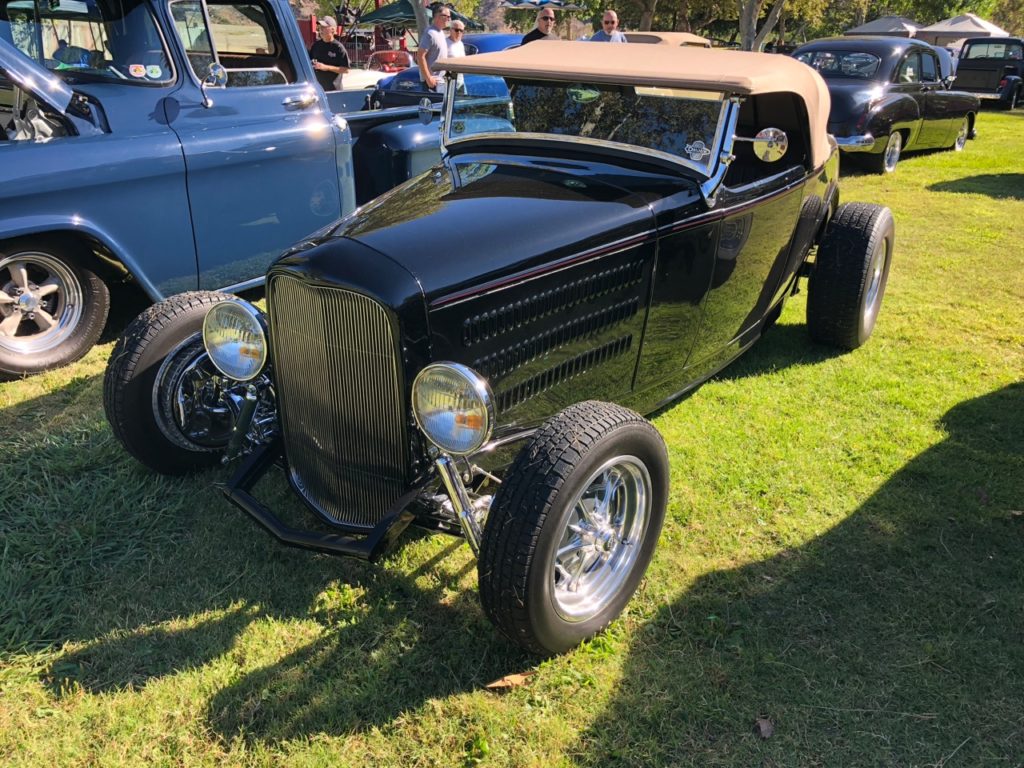 Deuces were out in force at the show. I examined this Bop Top for how it was constructed. 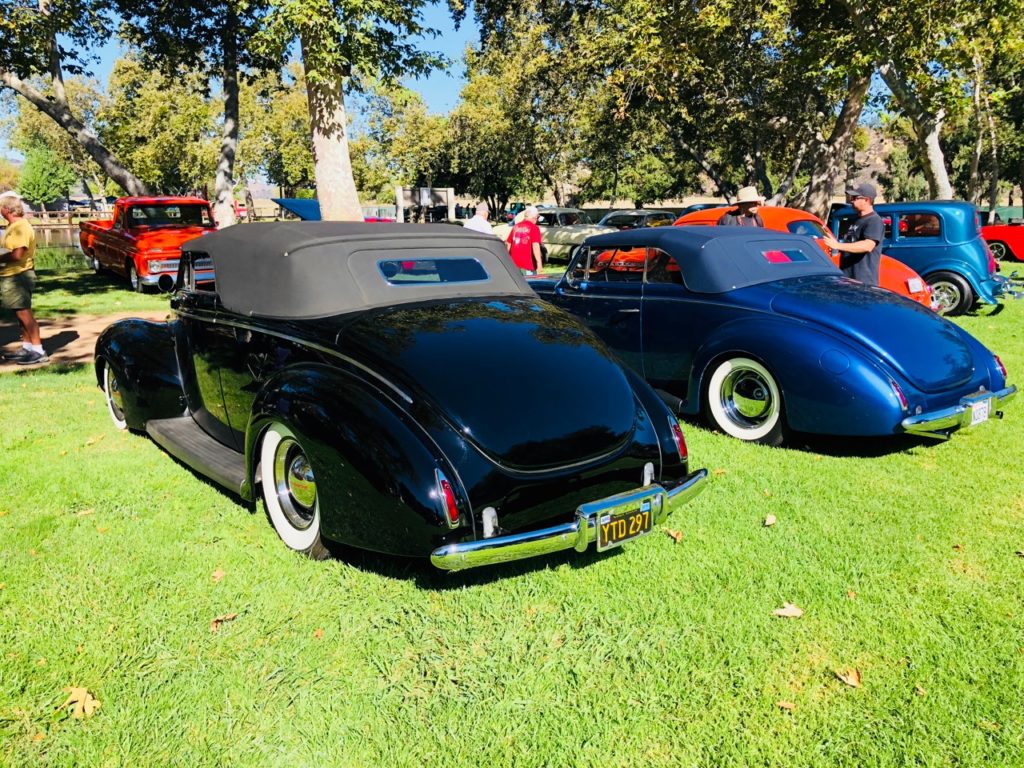 Tony and Dave had the two best 40 rags at the show. Dave’s car always attracts attention as does Tony’s. Both have Stude lights. 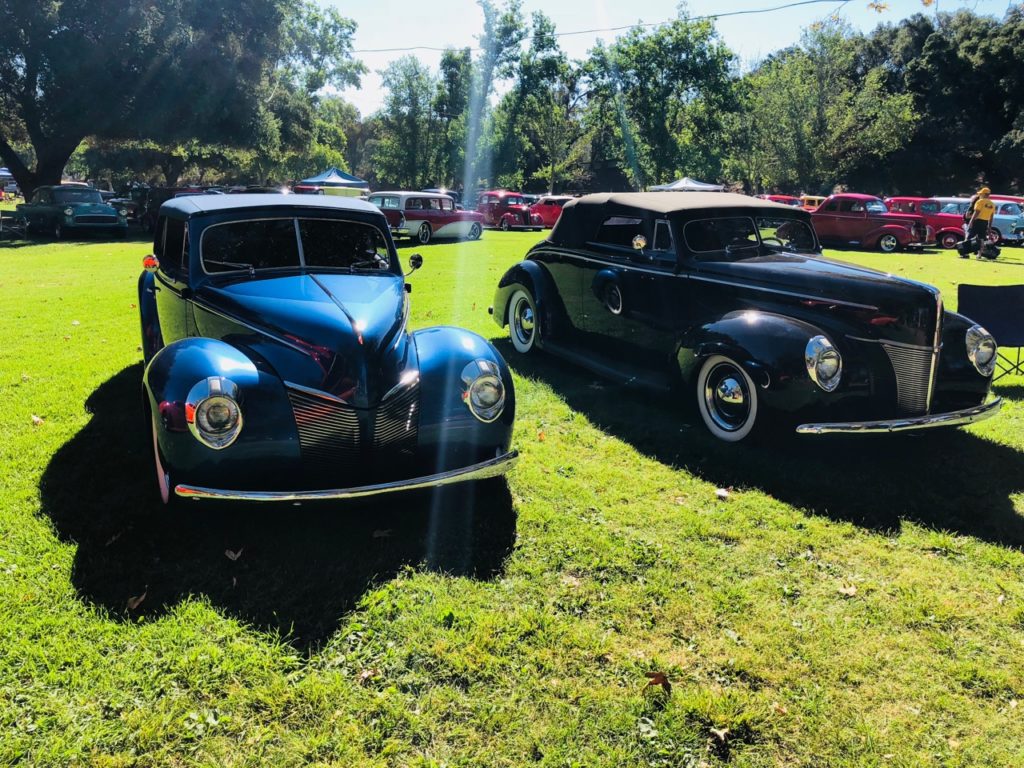 Tonys was a coupe to start with and Dave’s in an original that he has owned for years. 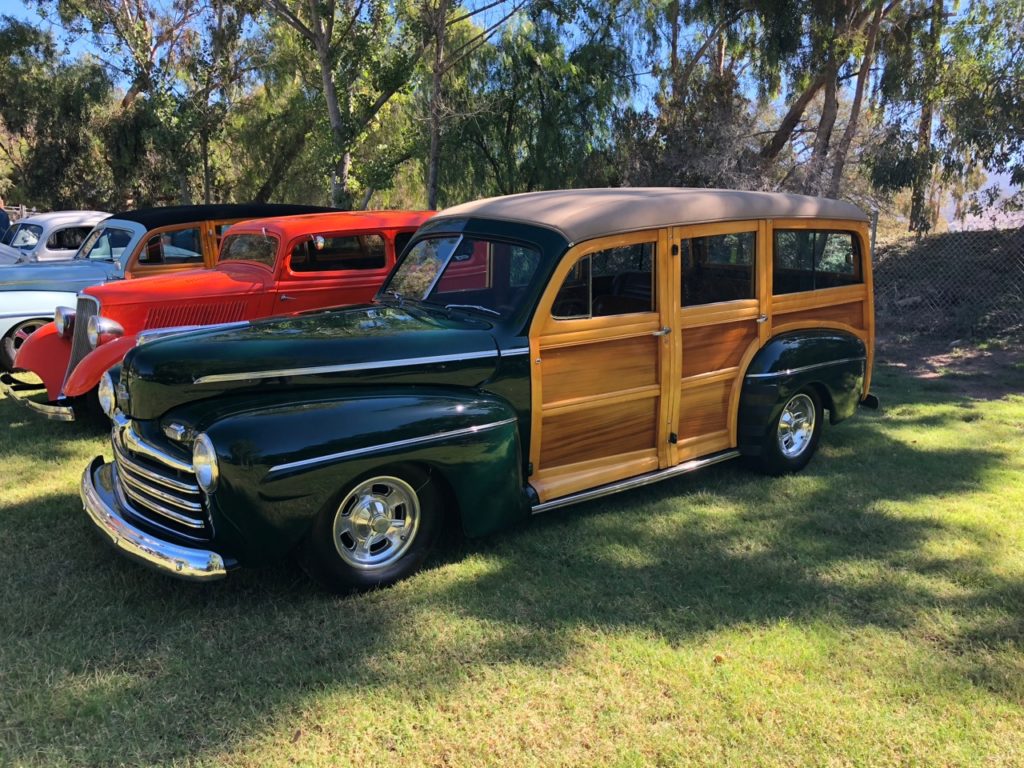 My love of woodies was not to be left out of the show. There were several in attendance. This 46 was a Thelan built woodie. 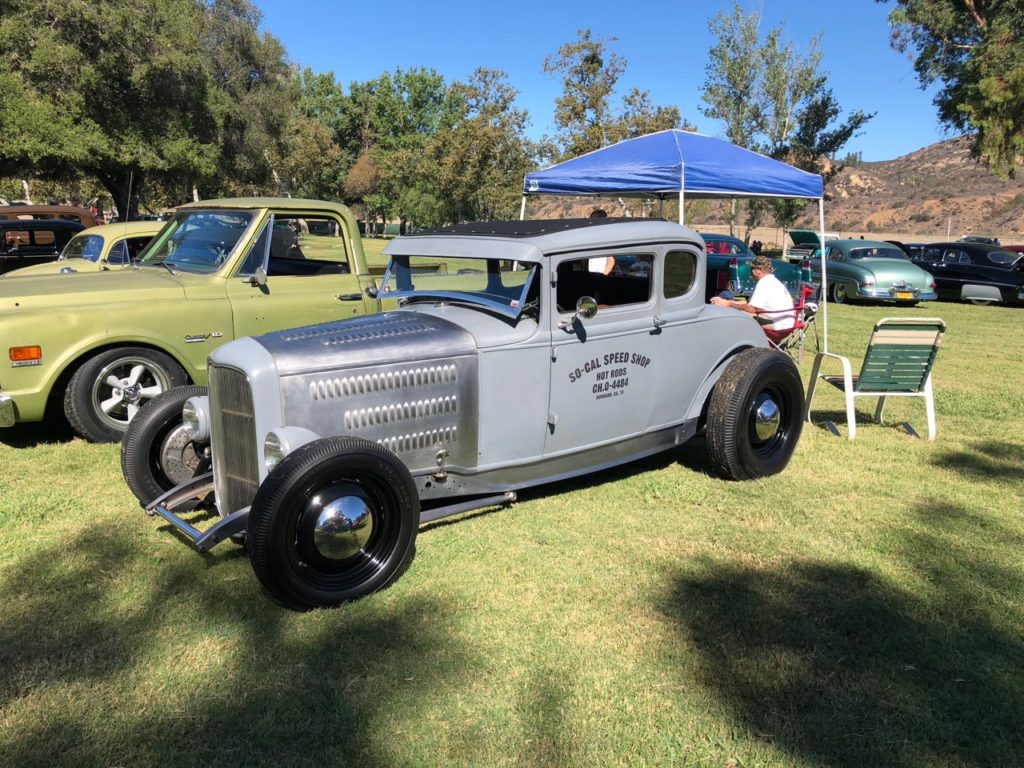 The SO-CAL coupe was in attendance and looking good. 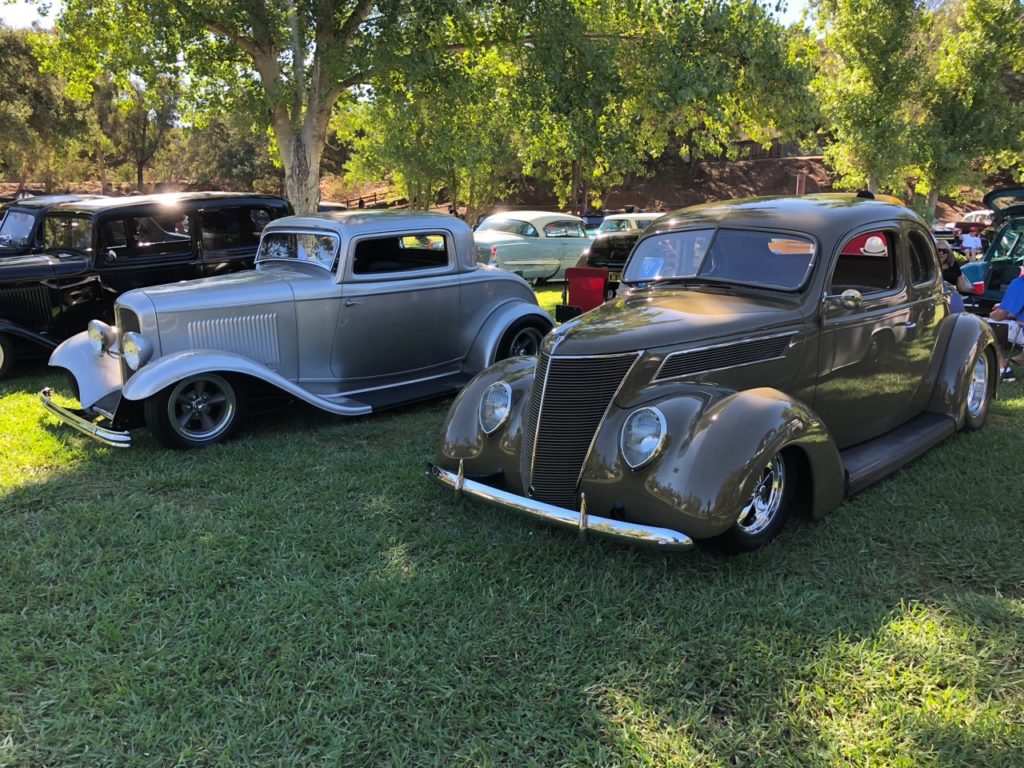 Ryan and Brian had their beauties in attendance and had the Reed’s Designs stance down pat! 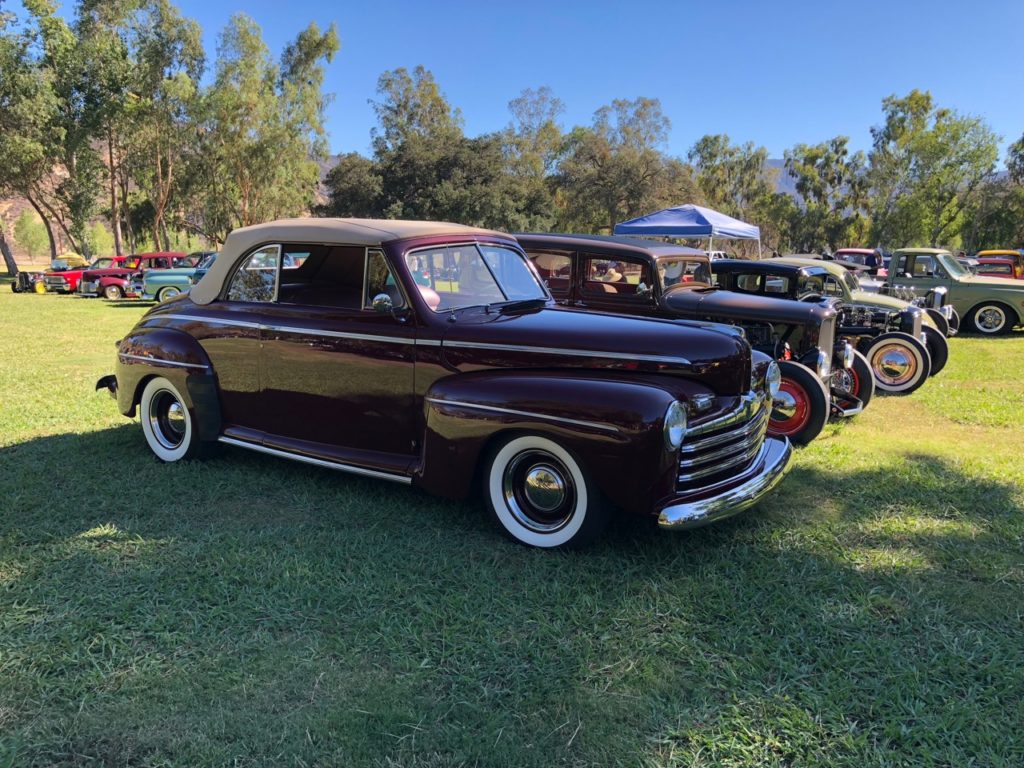 I thought this was my old 46 but it wasn’t. Super straight body and beautiful interior. 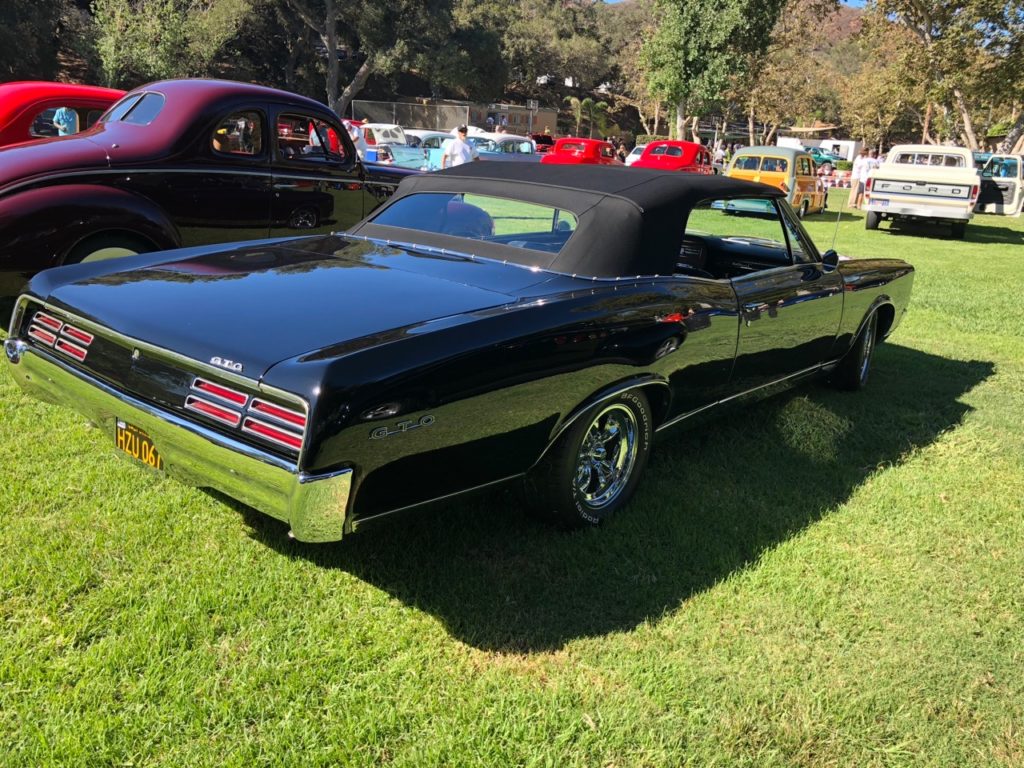 This GTO was one of several at the show. The body was perfectly straight. 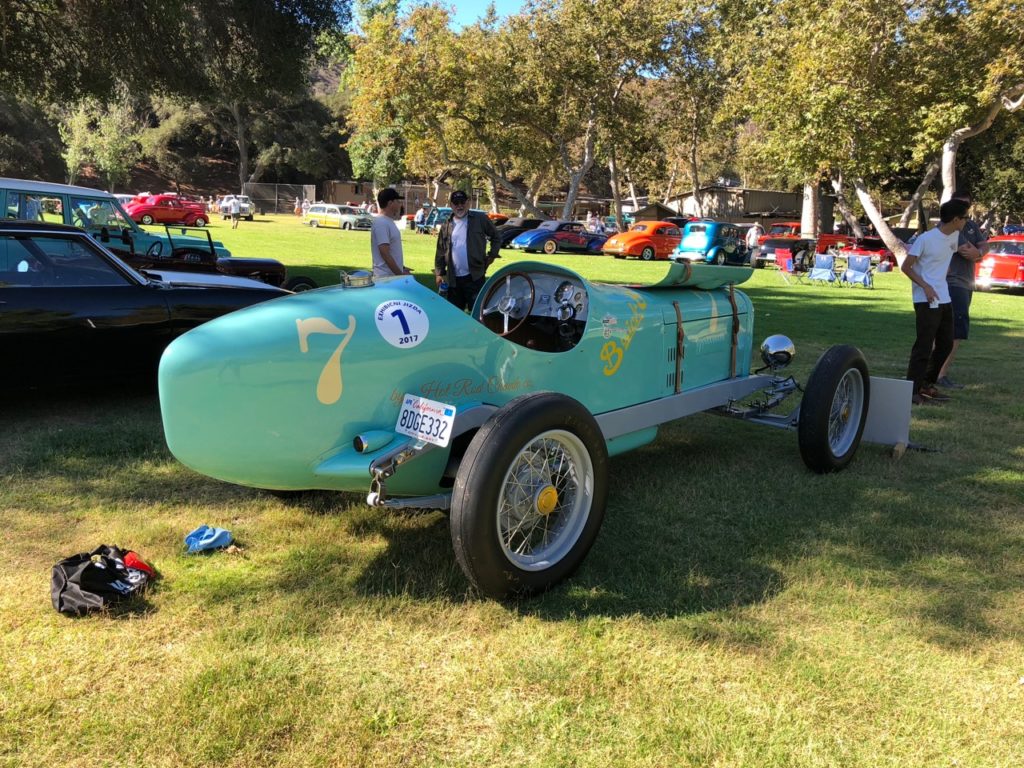 I didn’t get the story on this racer but it was looking great and driven to the show. 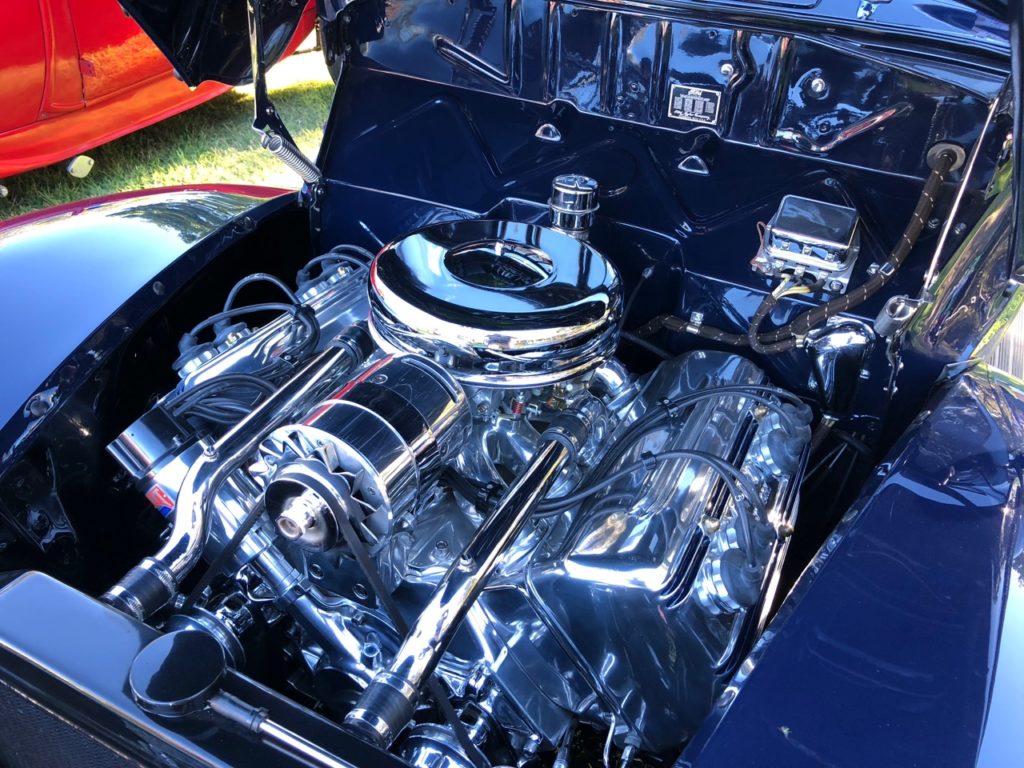 Ray always has the top shelf cars and this 40 coupe was immaculate. The Ardun head equipped flathead was details to the max. 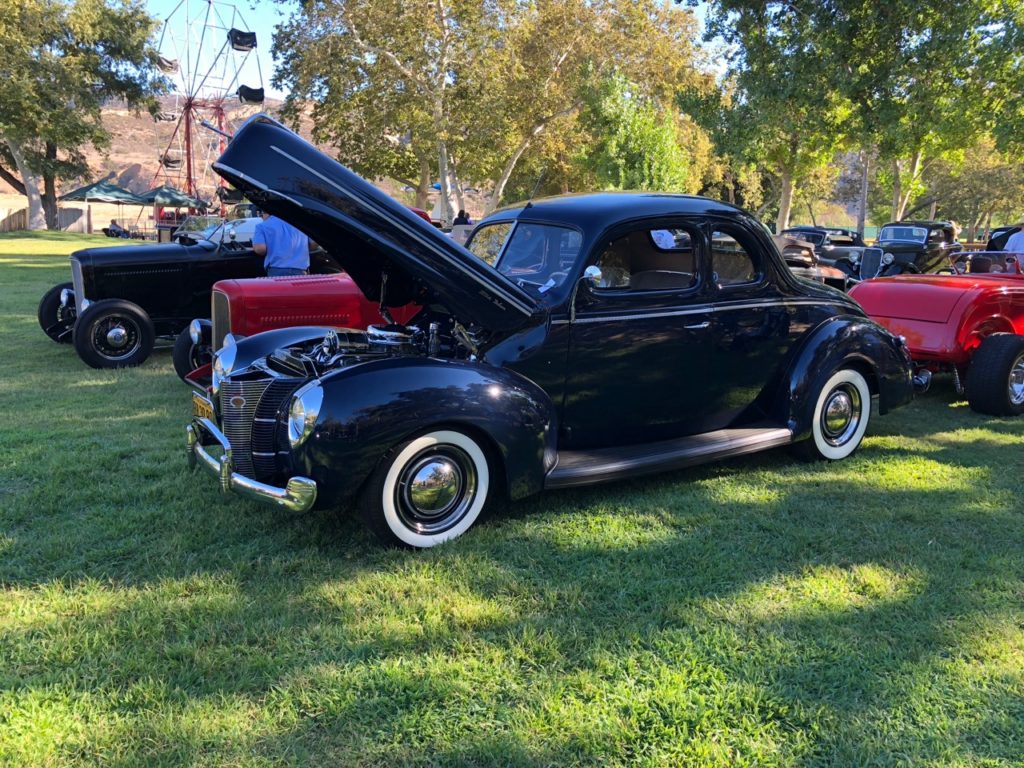 The entire car was perfect and a winner. 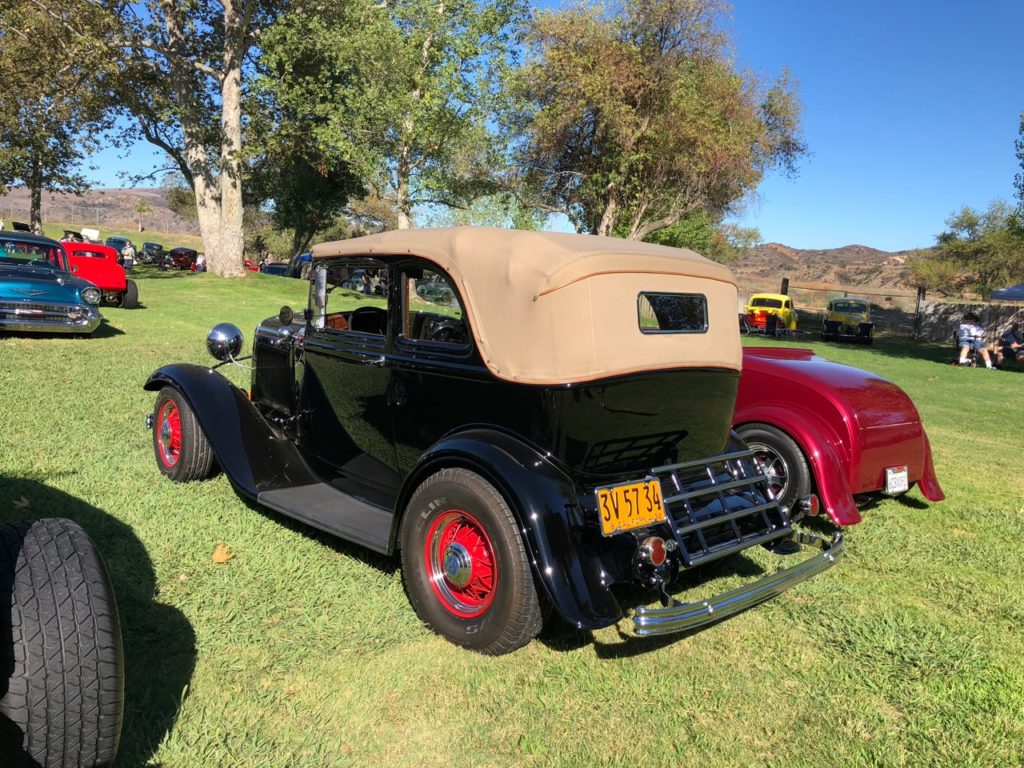 Not sure who owns this B-400 but it was a nicely done example of a rare Deuce. 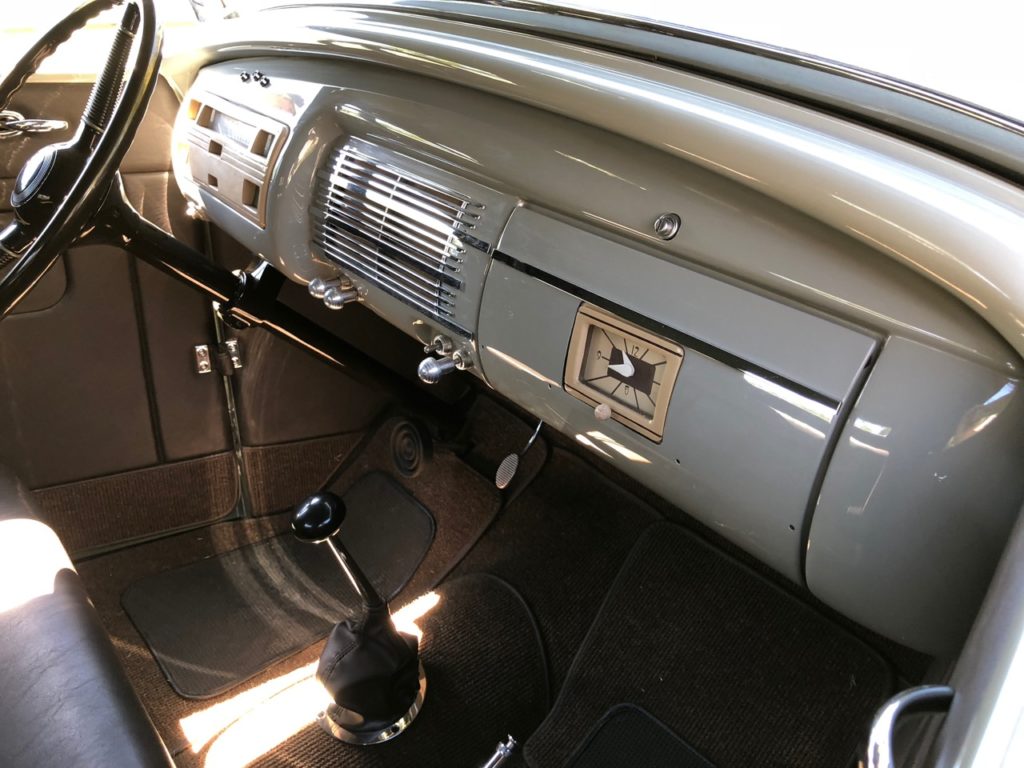 One of the crowd favorites was this SO-CAL built Deuce from a couple of years ago. The 40 dash was installed properly and looked good. 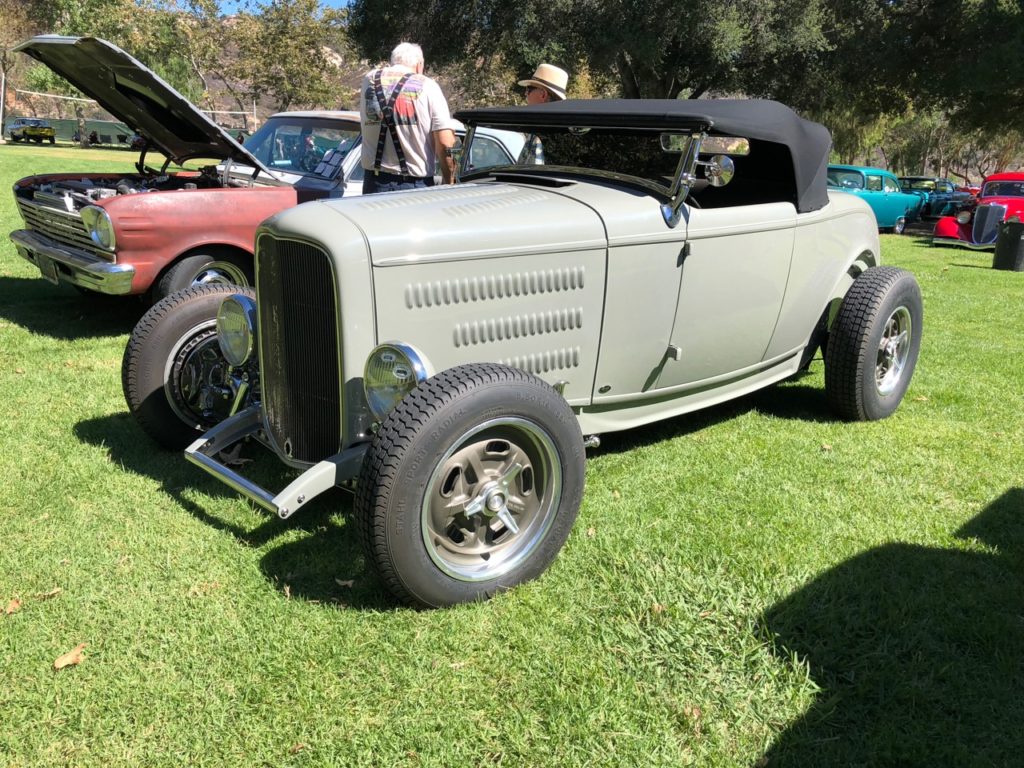 The color is a light shade of Gray and looks perfect for the build style. 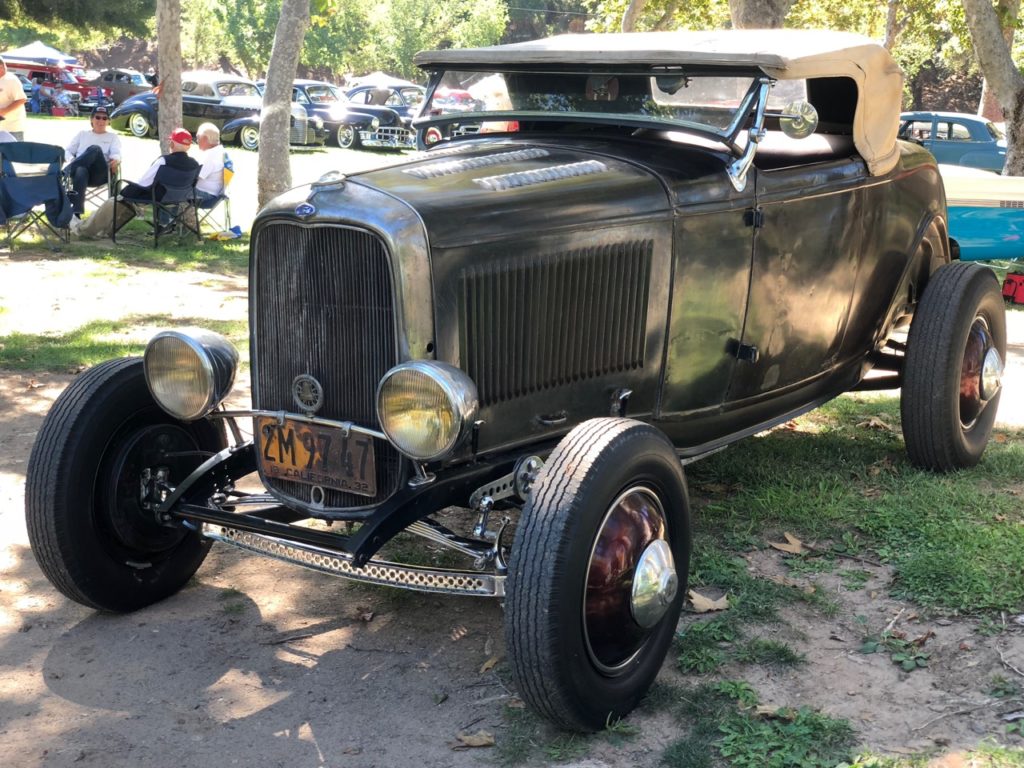 There were several original Deuce hiboys in attendance and drew my attention for a closer look. 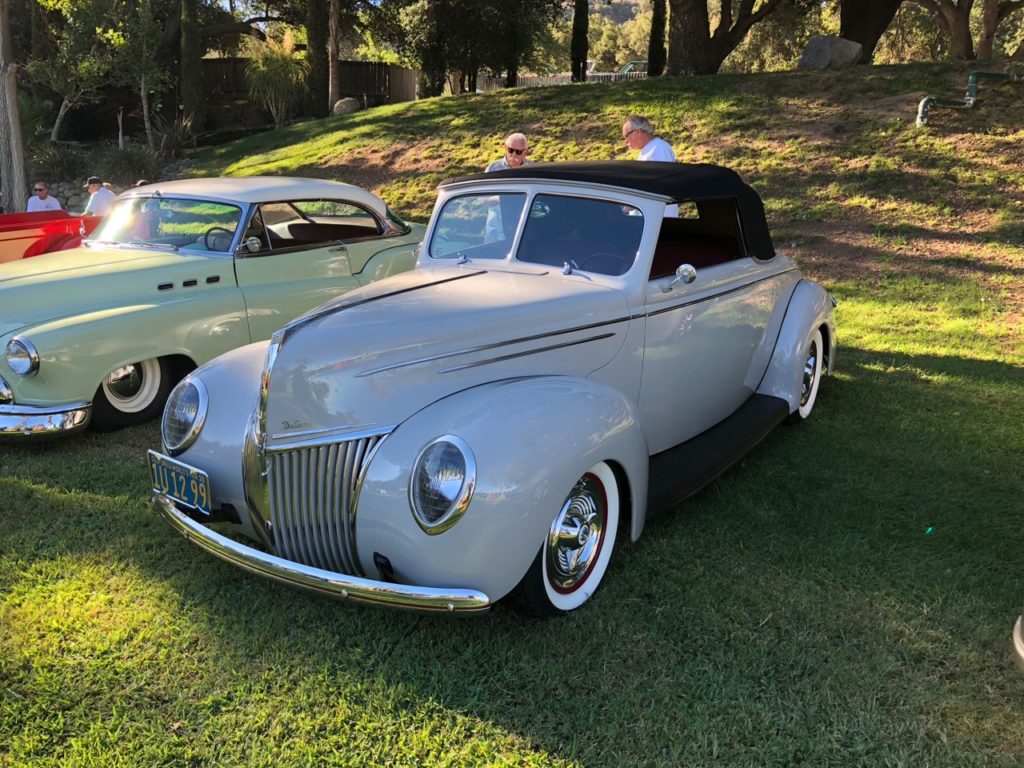 Another rag top was this 39 that was also a crowd favorite. Tom was a 33 roadster owner but needed windows. 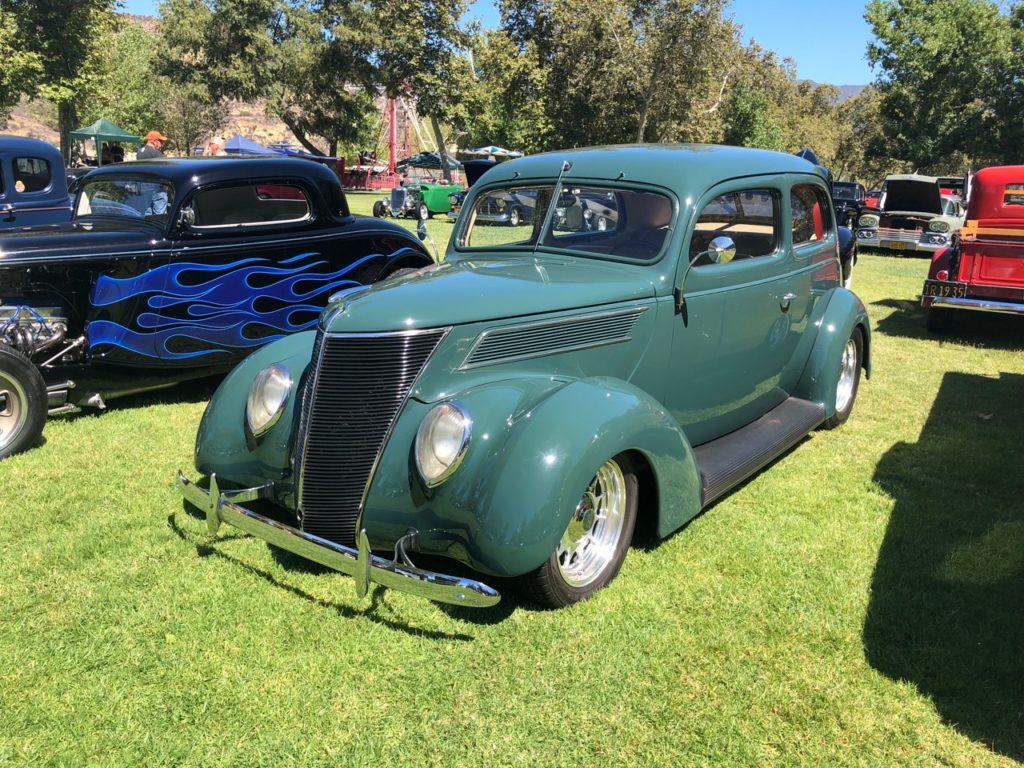 Not as popular as they once were this 37 was a very well-built car. 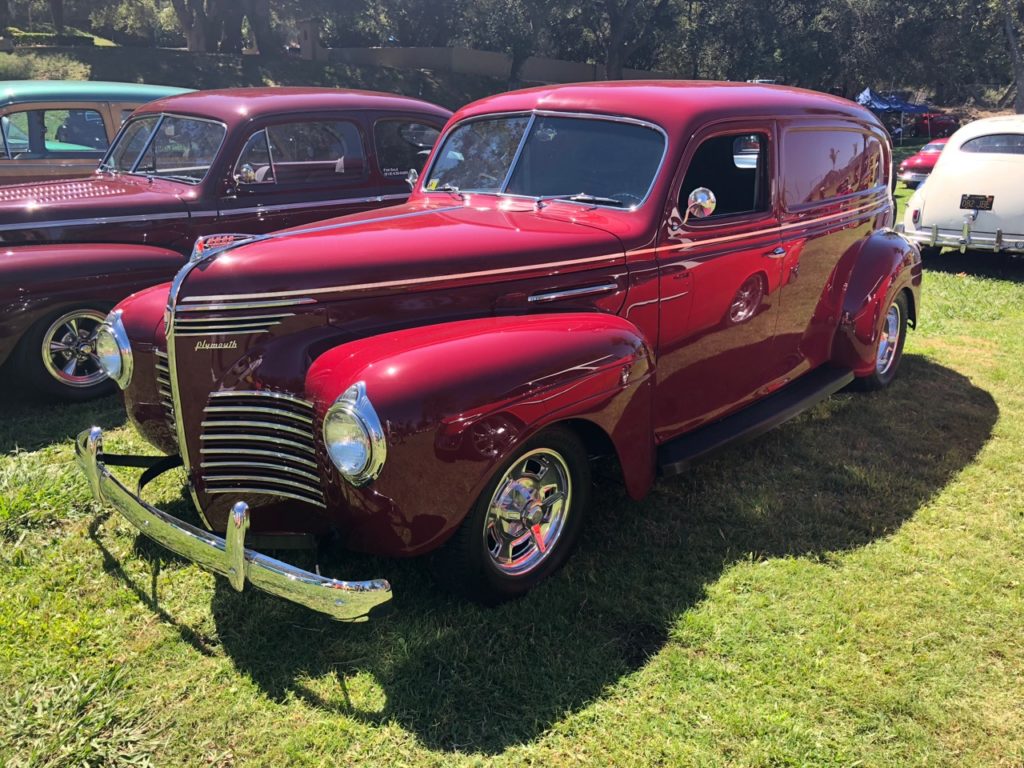 Jim finally finished his beautiful Plymouth sedan deliver. New paint and interior made it a keeper.