The weather in Southern California was perfect for the 7th Annual Malibu Woody Parade. Temperatures in the eighties along with bright sunshine made 40 Woody owners very happy. The event started at one of our favorite Malibu restaurants, Paradise Cove, which is located right on the ocean. We arrived early to enjoy a nice swordfish lunch and the company of good friends. The restaurant is a local landmark serving beach people for many years. Most of the woodies arrived later and soon we were off on the Malibu cruise. PCH is the main highway that runs along the ocean and is famous for cruising in your cool ride. We all headed out to our first stop which was at the old lumber yard, now a high end shopping mall. Arrangements had been made so we could all park right in the middle of the mall and hang around for our free hot chocolate. Walt and I decided we needed ice cream, not hot chocolate, on such a hot day. We spent some time here talking to other woody owners and then headed for our final destination on the Malibu Pier. We were able to drive on the pier and park for a beautiful view of the Malibu coast line. Fresh brownies were provided to those who had a sweet tooth. I only had two as I am on a diet for the holidays. We spent a couple hours on the pier a then headed home on PCH watching the beautiful sunset over the Pacific ocean. Ruby ran perfectly and made it back home with no problems.

Thanks to Walt and Lorraine for a wonderful day at the beach. 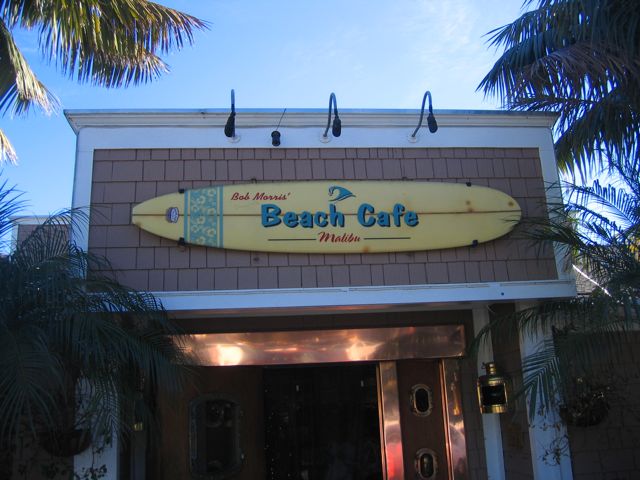 One of our family’s favorite places in Malibu is the Paradise Cove restaurant where you can never been underdressed. This was starting point for the Malibu Woody Parade. 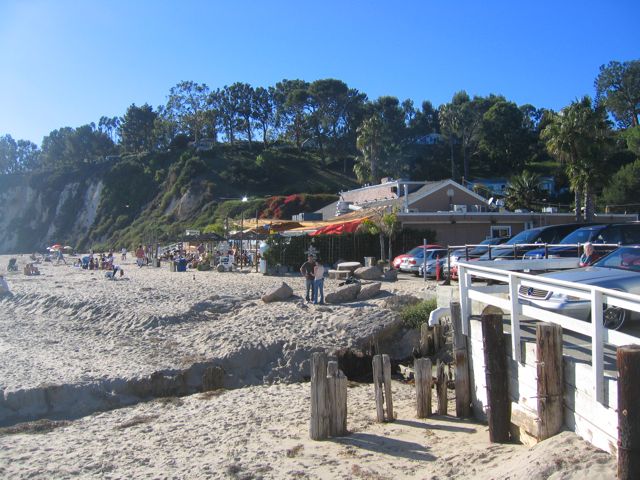 The back side is right on the beach and has seating for many people to sit and enjoy the ocean views. We had to wait for a lunch table but it was worth it. 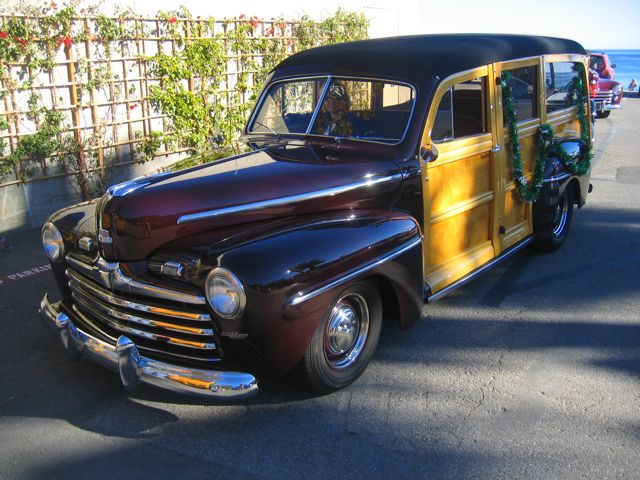 Most of the woodies wore their Christmas decorations. Walt brought along some greenery for Ruby. She felt much better than being the only one without fancy garland. 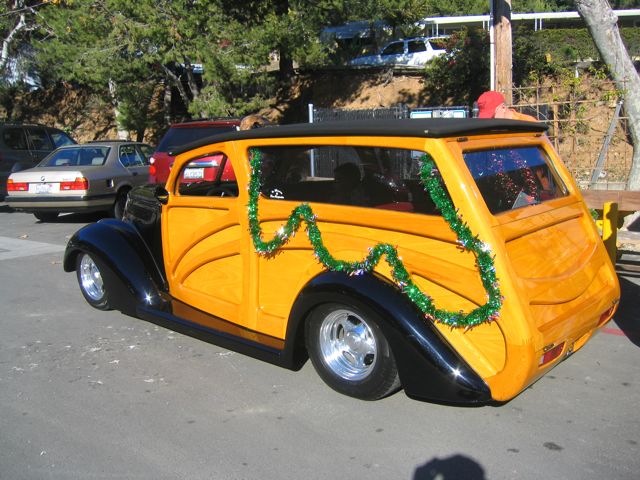 Walt kept busy after lunch decorating the woodies. Packing tape kept the garland on even at 50 miles per hour. 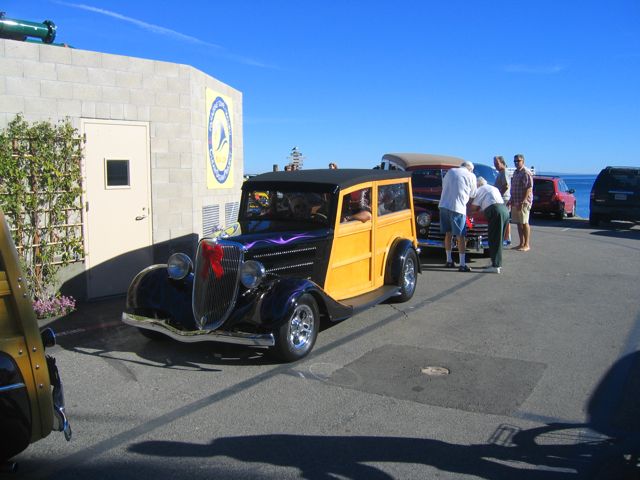 Jim and his daughter had their decorations inside of their nice woody. The also had Mr. and Mrs. Clause as rear seat passengers. 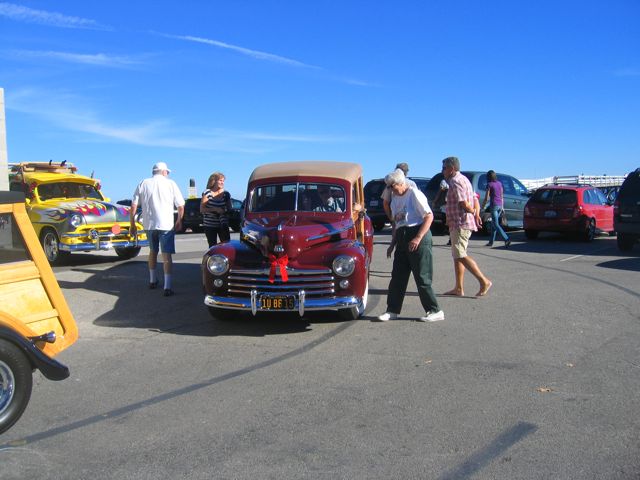 Bob and Sandy were decorating their Woody at the last moment and made sure everything was just right for Robin who took all the pictures.

We are now on the road and waiting to turn into the shopping mall. Walt had a rear wreath on his Woody so we could follow him in his hard to spot 37. 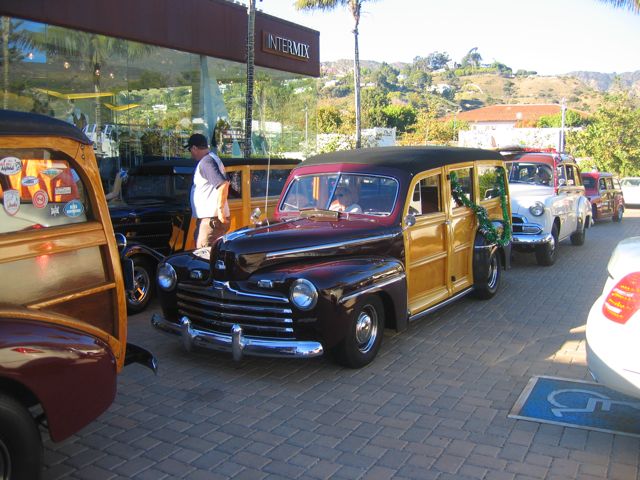 Ruby didn’t know what to do among all of these rich people wearing $700 levis. I am sure she felt just fine after hearing all the great comments about how pretty she looked. I agree she was standing tall even with her new lowered stance. 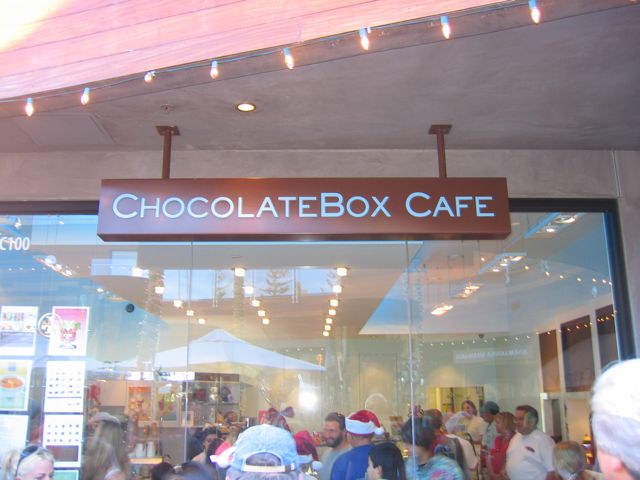 Inside the old lumber yard we were treated to hot chocolate or, in our case, ice cream in a waffle cone. 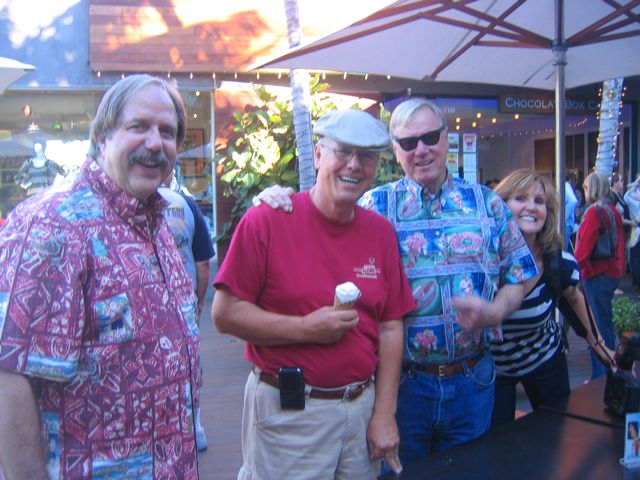 We all enjoyed the stop and a spectator agreed to take our picture. I only had one ice cream cone as I am on a diet. 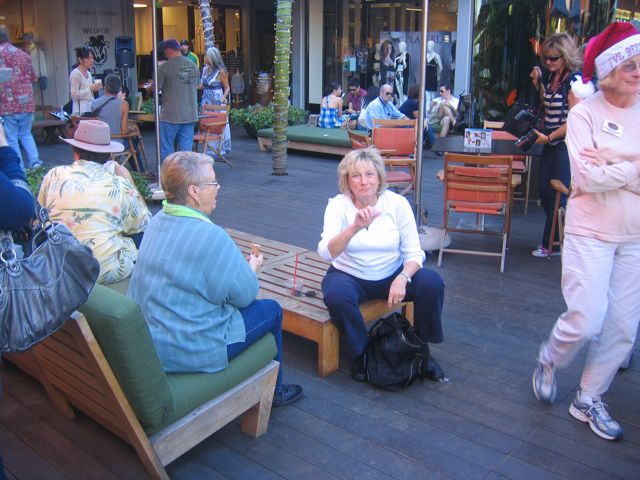 Jane and Lorraine enjoyed their ice cream as well. I needed to keep them out of the stores. 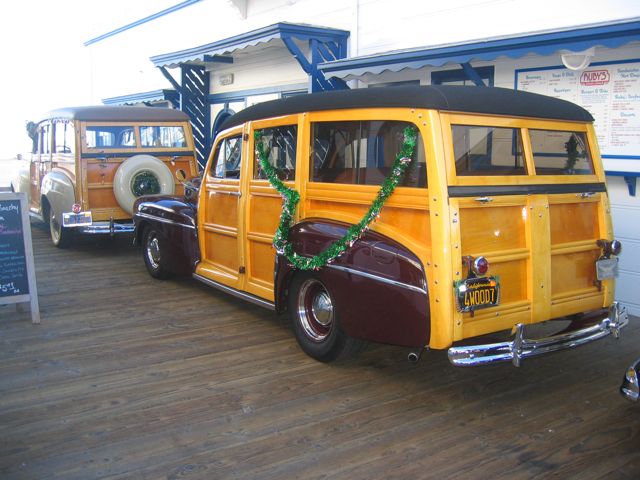 The last stop was the Malibu Pier where Ruby was parked right next to Ruby’s diner which was closed for the winter months. She was hungry so I got her another brownie. 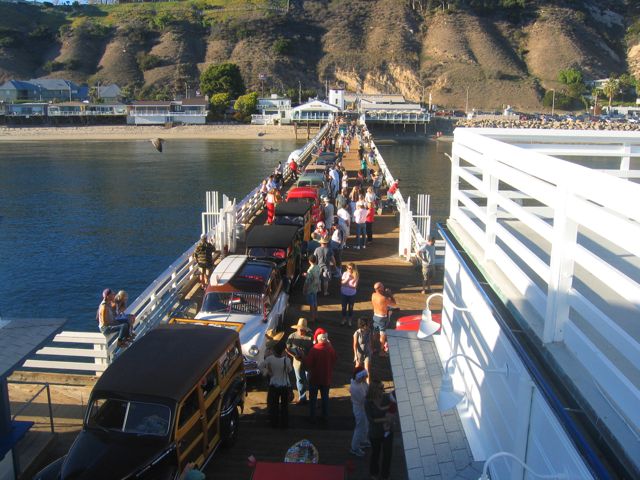 Only about half of the Woodies parked on the pier as you could not leave until everyone wanted to go. We were the first Woody so I knew it would be a long wait but an enjoyable one. 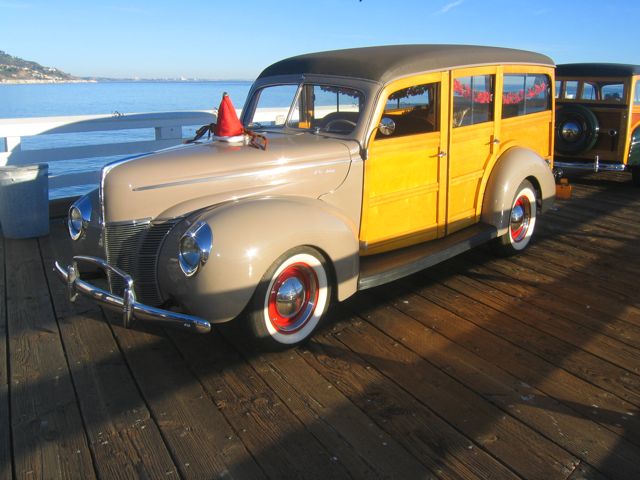 I spent a lot of time looking at the 1940 Folkstone Gray woody. I think it was a stock one but couldn’t tell what engine was under the hood and the owner wasn’t around. The car looked to be very nice and had a perfect hood fit. 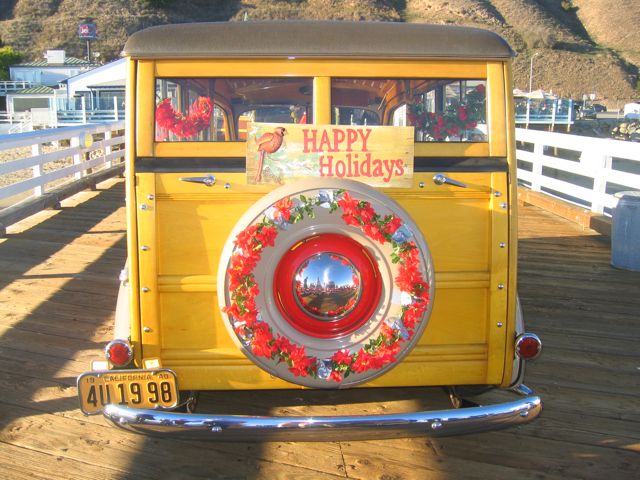