The 50th LARS was a huge success with over 1100 roadsters from all over the world enjoying beautiful, balmy and sunny weather at the Fairplex. My friends and I enjoyed the pre-show tours as well as the big event on Saturday and Sunday. The surrounding streets, restaurants, hotels and neighborhoods were filled with roadsters. The most popular color is still red and black but many new shades were also on some of the recently constructed Deuces. JHRS had some interesting rides with various colors and interiors as well as flat paint and primer. I think there were a record number of hiboys in attendance. I grew tired of looking at them and searched for a model 40, a phaeton, or a 36 modelâ€¦.very few in the mass of Deuces.

Deuces are by far the most popular car at the LARS. The only new trend I noticed, besides the high quality of cars, was the abundance of the Stanley Wanless laid back windshield; in fact, I grew to like them after learning from the owner of the Adams Rod Shop that the angle of the windshield greatly reduces the wind noise from the standard posts. You must have your seat lowered to the max to sit below the windscreen to fit under the top but you are “way cool” doing this. Walt and I tried out one of the Deuces with a Carson style top and learned that it is much easier to enter through the passenger side and slide into the steering wheel than to try to enter on the driver’s side. My head was about 1/2″ below the headliner and his hit. I love ’em but they are a tight squeeze without some creative work on the seat. Alan Johnson had the best seats in his roadsters that were designed for driver’s up to 6′-4″. The back was laid back at an angle and under the rear lip of the deck former. I did fit in one of those without too much discomfort. Something to think about!

The show provided something for everyone, beautiful cars, huge swap meet, vendors, Cackle fest, Bonneville cars, past AMBR winners and perfect weather. During roadster week, many tours were held and the culmination of events ended with the SO-CAL and Walden Speed Shop epic shows. Walden’s was like attending a rock concert as you could hardly move while eating your free ice cream they served. The metal work at this shop is the best I have ever seen. Bobby has built a wonderful business by perfecting his craft. A special three window coupe for a Japanese customer proved to be the attraction for the night. I am sure you have seen his progress on this car on Facebook. Congratulations to the LA Roadsters and all the venues who contributed to this years extravaganza.

The memories will remain with me forever and I want to thank all of you readers of Pewsplace who stopped by and said hello. Pewsplace is a global blog for all of those enthusiasts who want to keep the flame burning one day at a time. Sweden, Australia, New Zealand, Germany, Japan and England were a few of the countries in addition to several from the US who stopped by to say hello. Next year I may do something special and have booth inside. 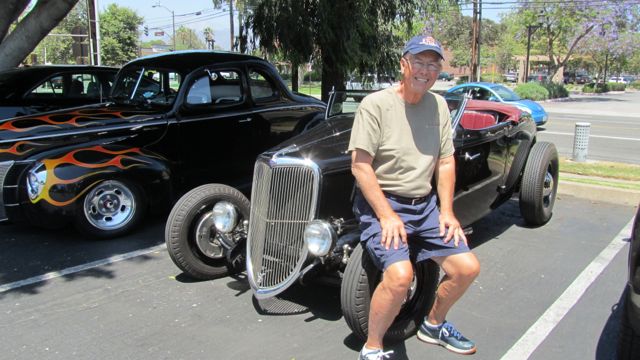 George felt I should pose in front of my favorite style model 40 hiboy roadster. We started off at the Early Ford Store in San Dimas. 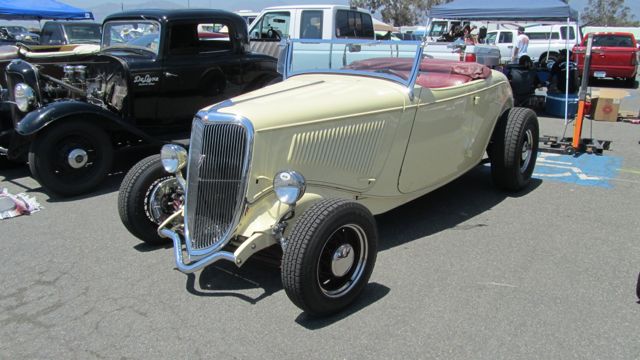 While walking the swap meet on Friday I ran into this real deal. I limit my time in the swap meet as I may drag something home I really don’t need. This one would have been the acceptable to my wife. 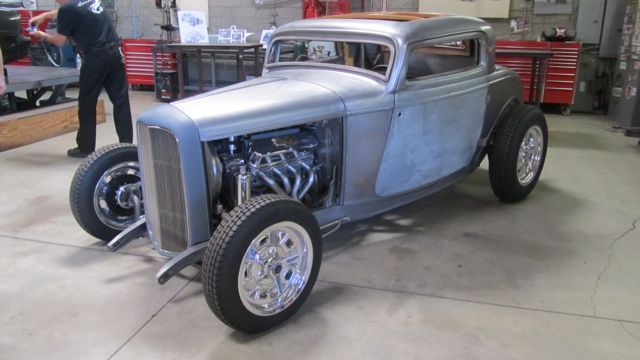 SO-CAL had several cars under construction and George and I felt this one was worth our attention. Heavy chops seem to be real popular on three windows both 32’s and model 40’s. 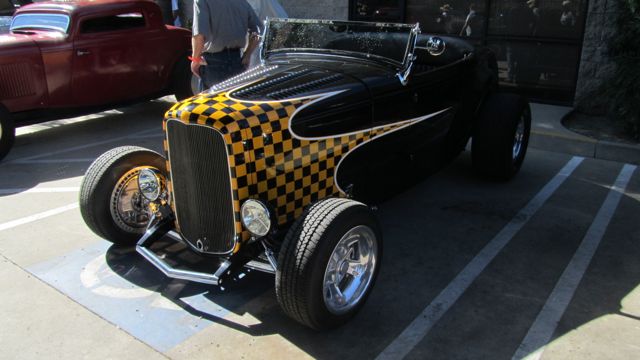 Barry’s old roadster was parked in the entrance for all to have a look and comment on the checkerboard graphics. 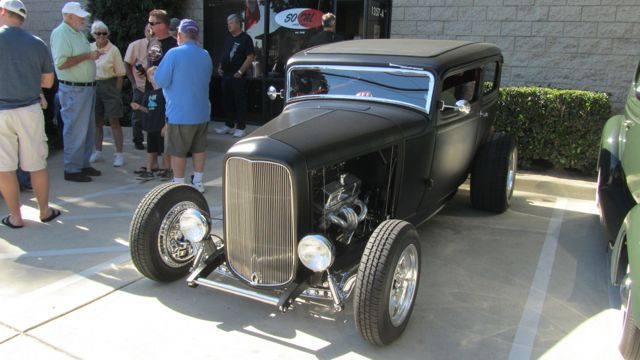 Gary’s son has his Cornhusker built sedan available for me to see for the first time. I really like this car since he has redone the entire car. 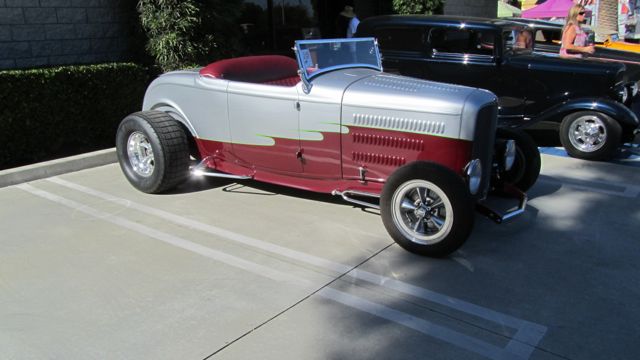 Ron, a long time friend, had his roadster looking good for the show. Eastwood chassis and mega tires on the back make it a 60’s era beauty. 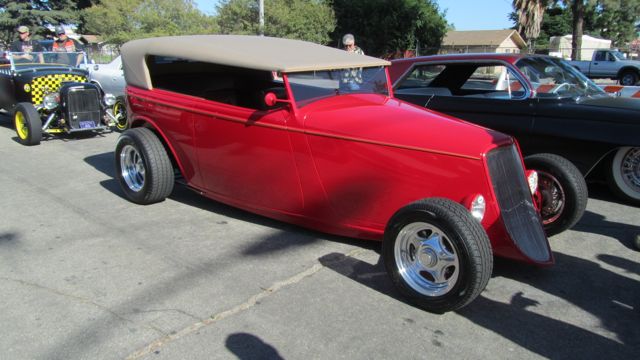 Parked on the street was Larry’s AMBR that Boyd built. If this was in the 80’s it would have been on a revolving pedestal on center stage. I like when they drive the mega buck cars with the rest of the world. Boyd’s cars could be driven and were, by most owners. 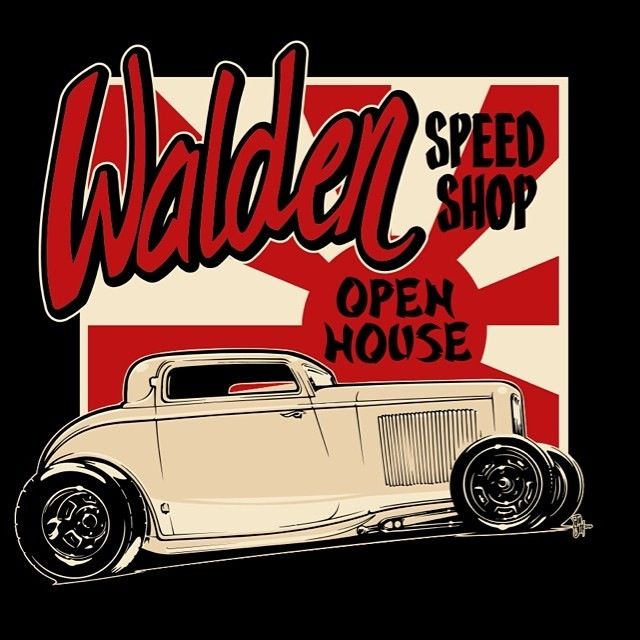 The coupe was featured on the Open House T-shirts which quickly sold out. They will have more. 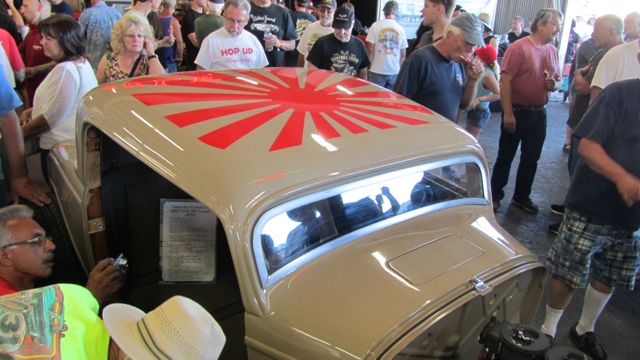 At Walden’s this Adobe Beige 3 window was surrounded by people the entire time we were there. You had to spend some time to capture all the special details incorporated by the Walden staff. Notice everyone holding an ice cream bar. Thanks Bobby. 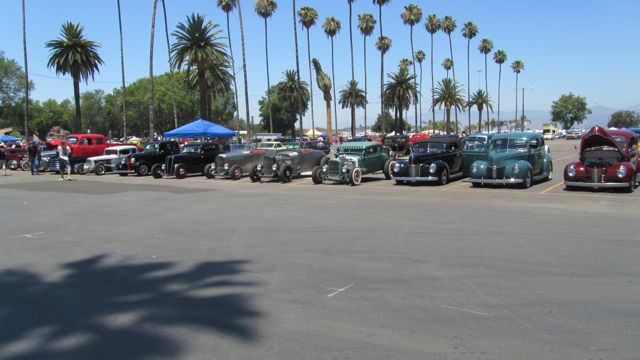 This was the scenery all over the Fairgrounds preferred parking area. 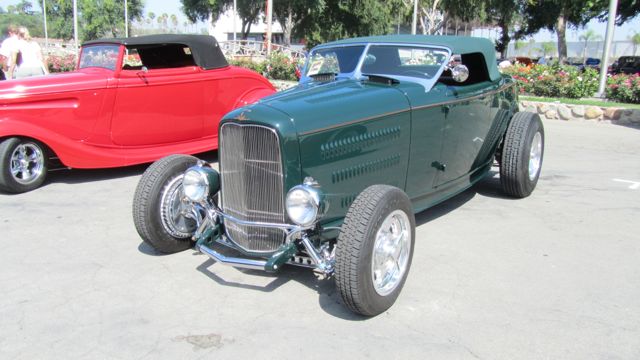 Del had this beauty on display. I would think the DuVall offers the same advantage as the Wanless design windscreen. 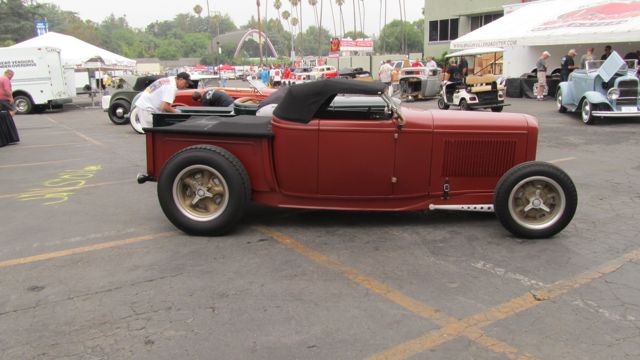 JHRS had this sleek looking roadster pickup which lead the crew from Alabama to Pomona. I could get used to one of this. Notice the windshield and top. A special thanks goes to Angie for explaining the car and their trip to us old dudes. Their shop build some real high quality cars. 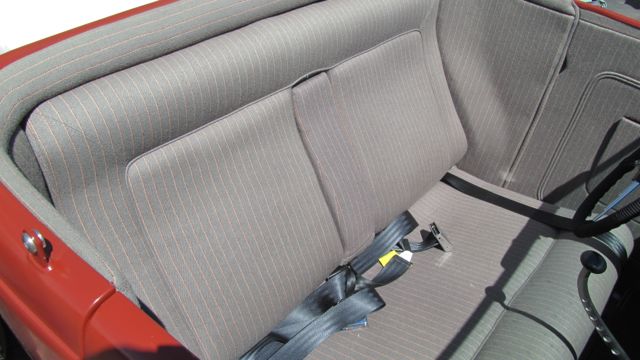 With the seat in this position I fit just fine in the RPU of JHRS. The arm rest would be nice. 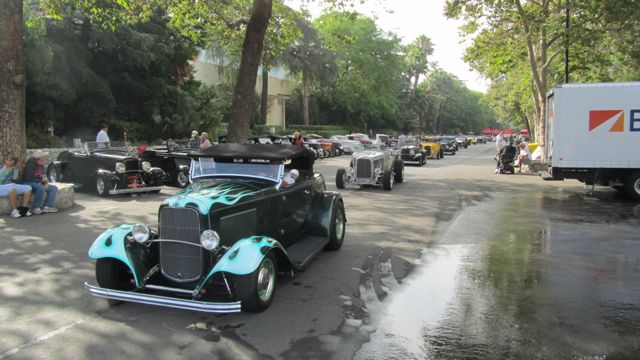 Early Saturday morning, Frank let me stand and take some photos of the long line of roadsters who were arriving from all over the world. When I left about 8:30 they were up to about 900+ cars. 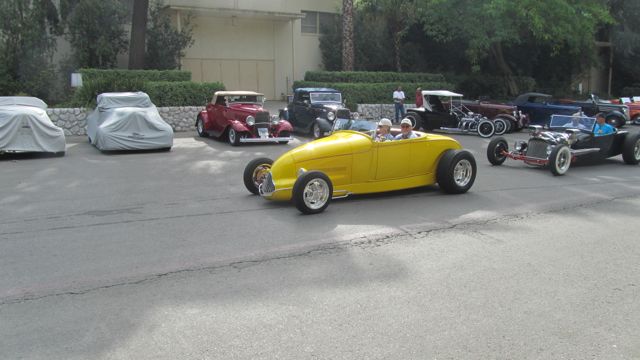 Gary and Marilyn were among the early arrivals in their Moal built 29 track roadster. 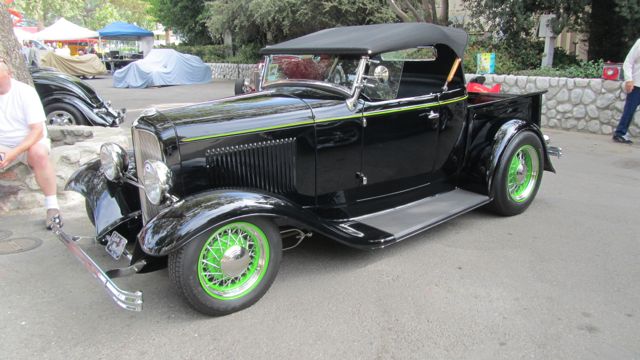 Several Deuce RPUs were in attendance but very few had fenders like this one which belong to a LA Roadster club member. 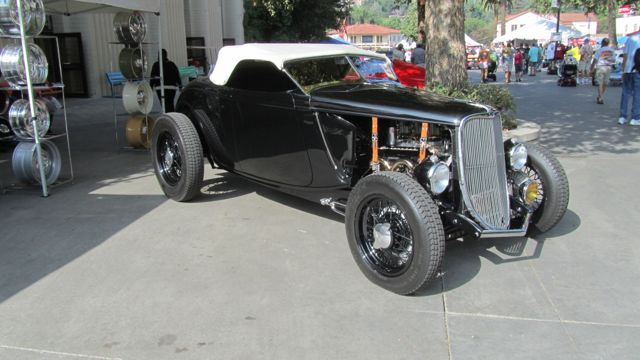 Lucy was in the Wheelsmith booth with her 18″ & 20″ wires and Excelsior tires. Ray, the new owner, has redone several items on the car to make it his. 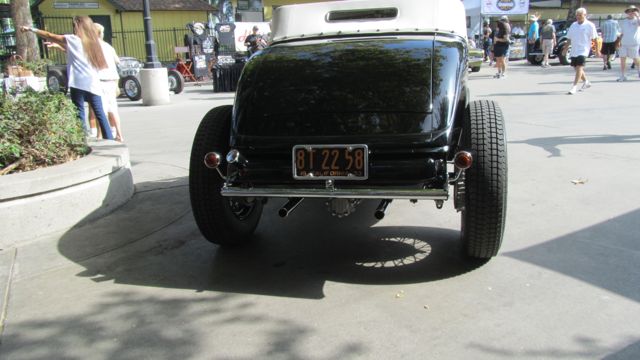 The tall tires make the QC stand out as well as the rear Buick drums. 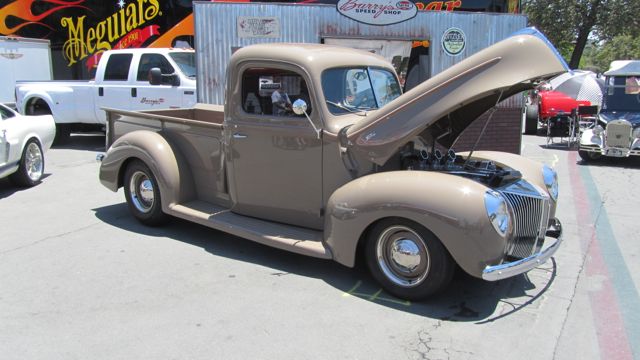 I saw several very nice 40 pickups but was particularly impressed with this one. A subtle beige color and gorgeous engine compartment made it a standout. 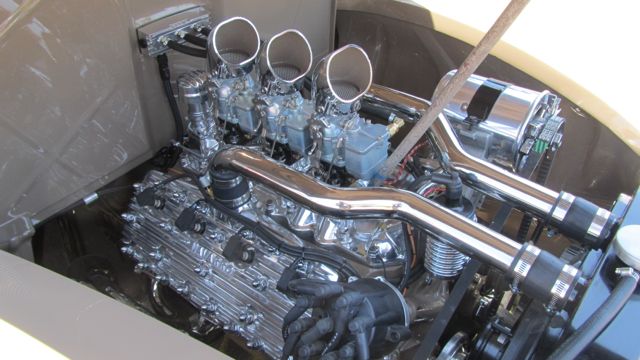 Clean, clean and highly detailed was the best way to describe this one. 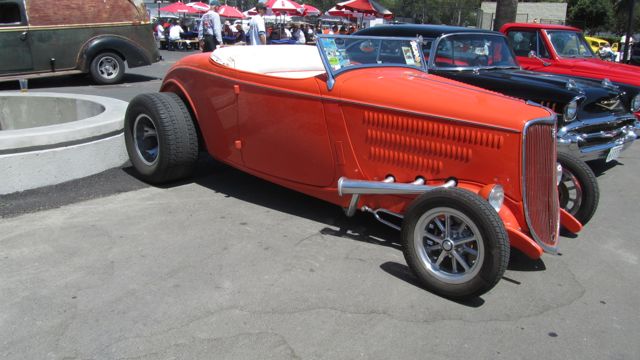 Ray has his R&C cover car hanging out with the Deuces at the Fairplex. Roy did the chassis and helped in the build many years ago. 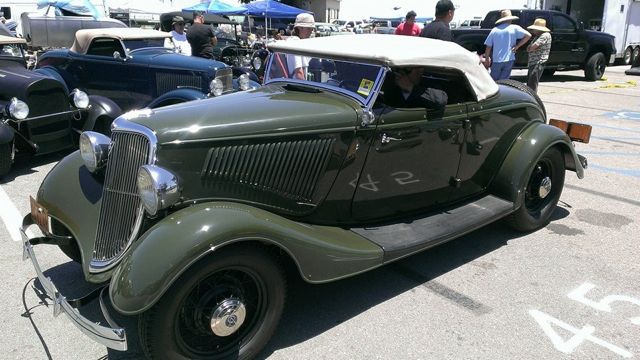 Joel shot this photo and simply stated: “Perfect” which I agreed with. 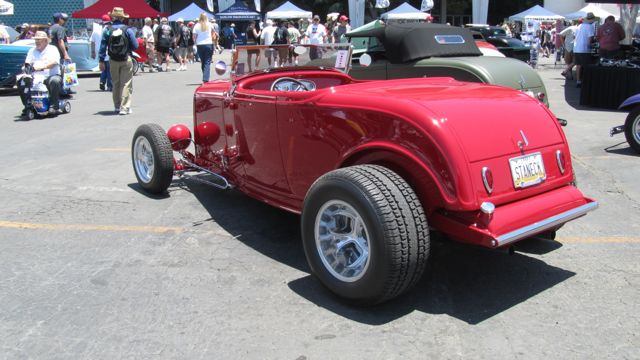 Chris had his “Ohio Look” roadster parked in the JHRS booth. He has built many Deuces over the years. 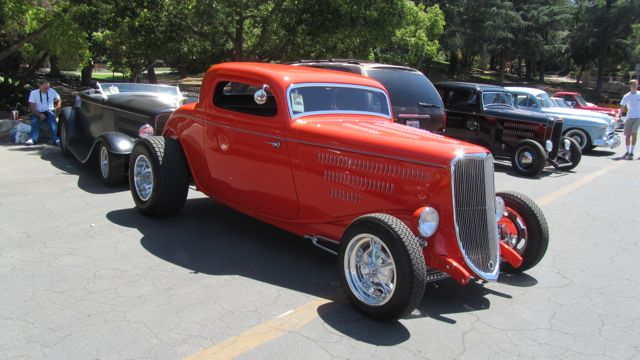 George and I thought Wayne’s 33 coupe was one of the best at the show. The orange paint is a mile deep. 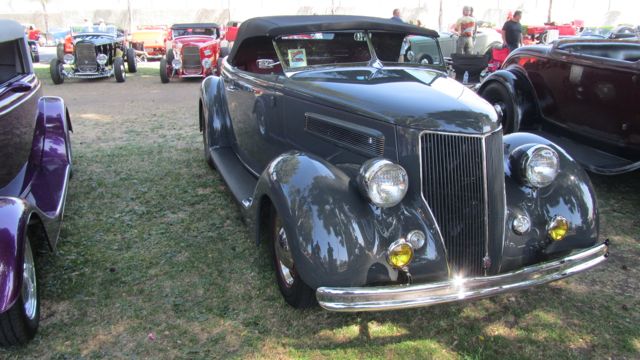 I loved this 36 roadster with very “Aristocrat” style. A Duvall windshield looks perfect on a 36 roadster. 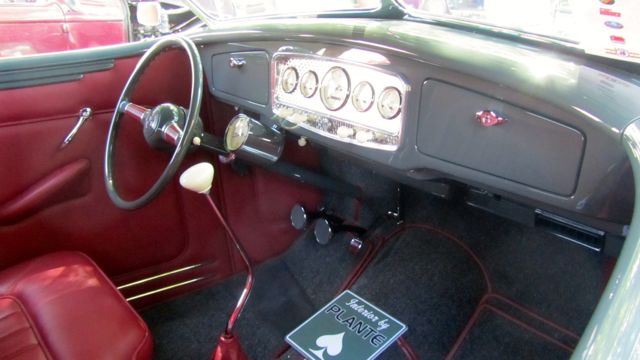 An Auburn style dash was instead into the custom dashboard with two glove boxes.