Fall didn’t last long and we were blessed with warm weather for the weekend. Saturday morning I cruised over to the CCC Classic Chevy show and drove Pepe to show the Chevy guys what a real hot rod looks like. I have always been a fan of the tri-five Chevy’s, especially the Nomads and two-door post models. There were plenty of both at the show. Jim’s son, Tony, does a good job of keeping the CCC name in front of the public. He promotes all types of cars that can use the products they sell in their well stocked facility in Chatsworth. I spent a couple of hours looking at cars and talking to Chevy owners about their cars and engines. It seems most of the cars have modified engines which is the way I like them. SBC, BBC and the LS series are all very popular as is EFI. I guess it has always been about the engine for me. I want it go fast first and look good later. For me,the stock ones are fine to have on display but not to drive. My favorites were the “Black Widow” clones hiding in the back lot. I have always been a fan of the FI 57 post models. I finished my visit with a tour of the retail store and picked out my Christmas gifts which will soon be listed in their Holiday Catalog. Mr. Bob’s garage will be on the cover. Don’t miss this special issue.

Sunday proved to be a perfect day for Jane and I. We spent the day in Dana Point enjoying the wonderful woody show in one of our favorite venues. The Marriott Cliffs resort, overlooking the Pacific ocean and adjoining Lantern Bay Park is tops in our book for a place to visit for a great time. The weather was perfect, the band was great and a good time was had by all. This event ends the season for Woody shows and it truly was well attended by woody owners. We were treated to a special exhibit of the Asian Elephants at the hotel and park. Jane had done some research in order that we knew where they were on display. I gained some knowledge about the Asian Elephant herd that has been diminishing to the point of being almost extinct. The exhibit was stunning to say the least and we all enjoyed looking at the artistic Elephants that were on display and for sale. Thanks to Walt, Dave and Jim for including us in the group.

The drive home was long but we grateful for another day of “Living the Dream” in Southern California.

Have a fantastic week of doing what you do best. 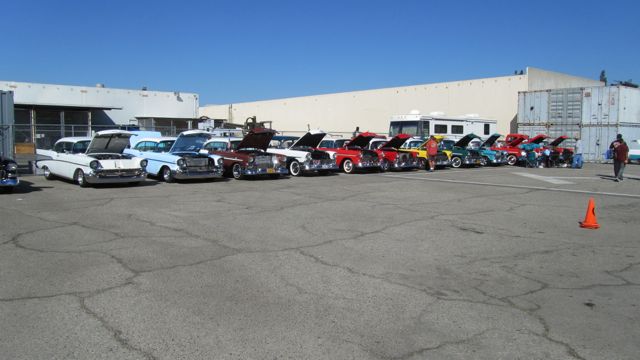 Here is partial photo of the Chevy’s. Note that most hoods were open to display the modern engines. Some were stock, but not many. 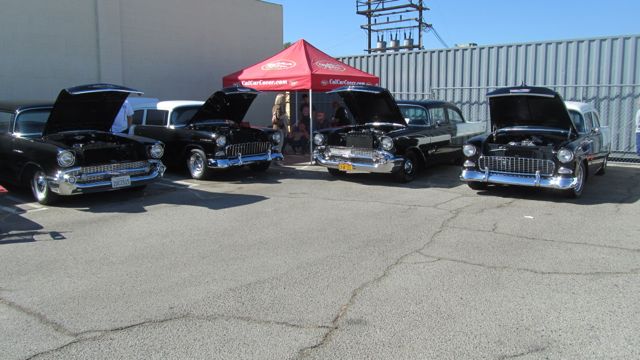 I spent a lot of time looking at these black and white beauties. The 55’s with the del ray interiors and the 57 clone Black Widows were all outstanding examples of the classic. 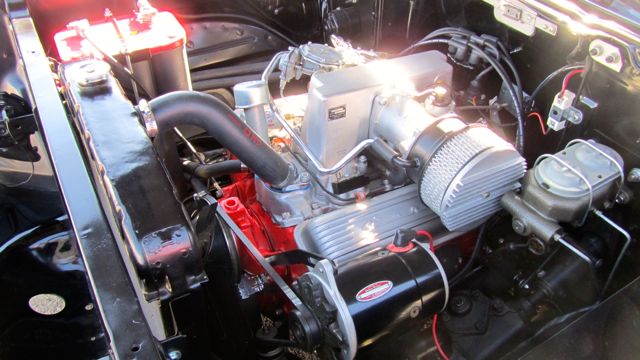 The FI units are scarce and expensive but sure look good in the engine bays. Some modern day concessions have been made to make these cars good, safe drivers and that’s O.K. by me. 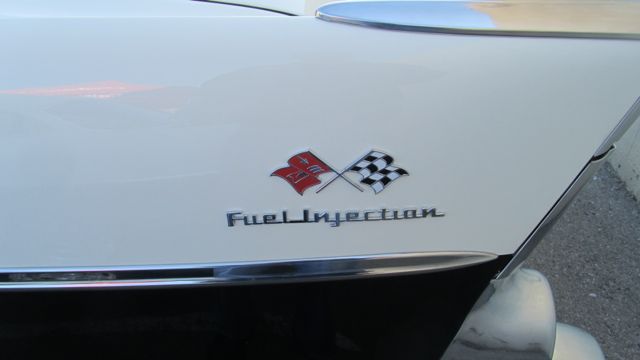 I love the rear fender FI emblem. I can’t recall seeing these in our little town in 1957 but I am sure there were some around. I can remember when getting one horsepower per cubic inch was a great advertising tool for Chevrolet. 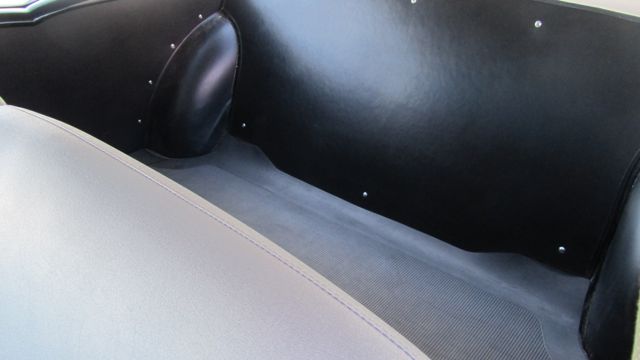 No back seat was a standard feature of the “Black Widow”. 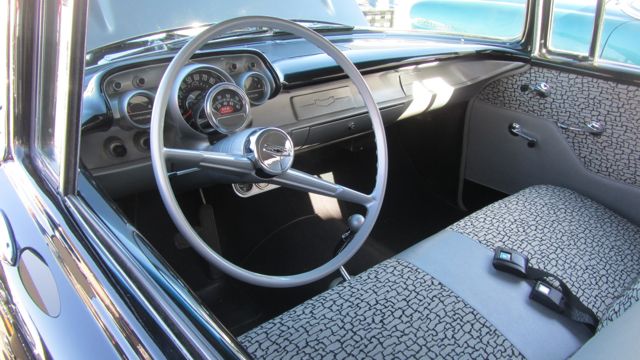 I loved the look…tach, floor shifter and radio delete plate all add to the flavor of this 57 post. Nice job. 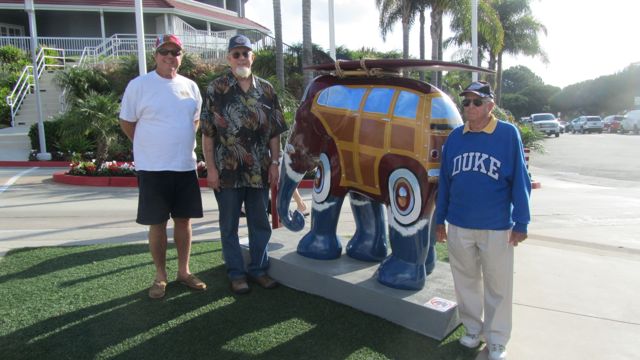 The hotel had an Elephant on display painted like a woody. Our crew looked stopped for a photo on the way to breakfast. 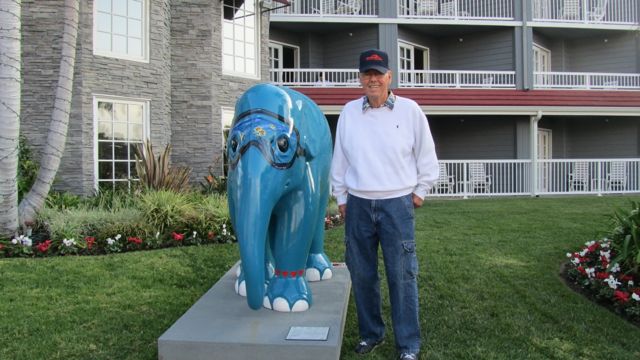 I thought the Elephants were magnificent and my wife thought I should pose for a photo. 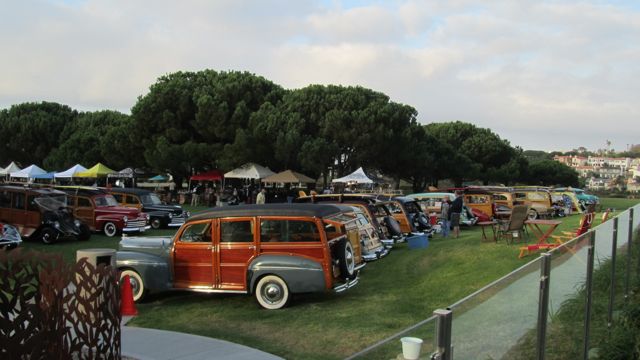 The woodies were lined up early ready to enjoy the day on the grass. The tents are vendors who were selling their goods. I believe there were 40 vendors total. 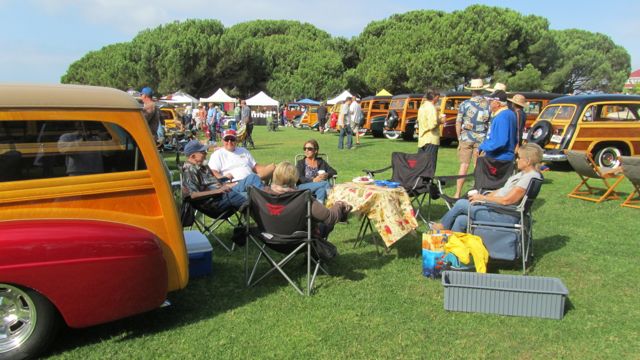 Our group enjoyed the camaraderie and relaxed atmosphere of the show. Dave brought a delicious tri-tip lunch for the all of us. 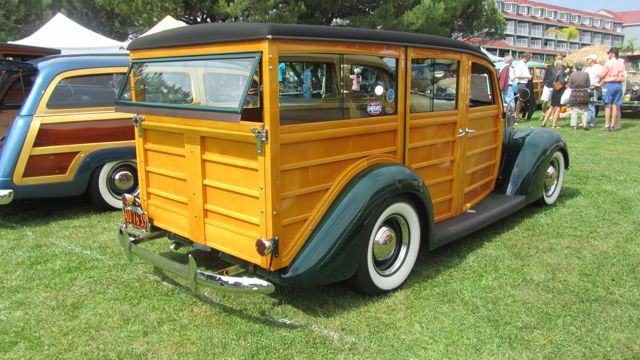 This fresh 37 was looking good with BRG paint and outstanding Monsanto woodwork. The woody also featured artillery style wheels which were hard to see. 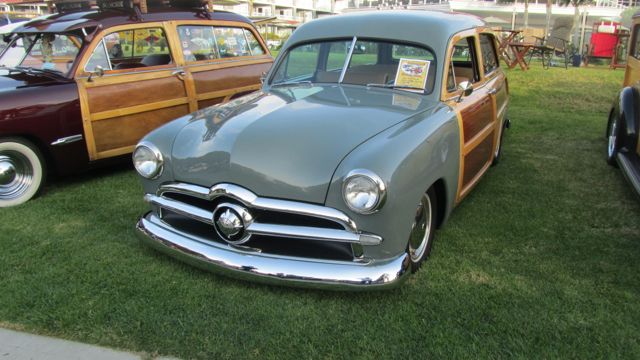 One of the nicest shoeboxes was this beauty. The color was just right to blend with the woodwork. The dash was simple and wood grained. Jane liked this one. 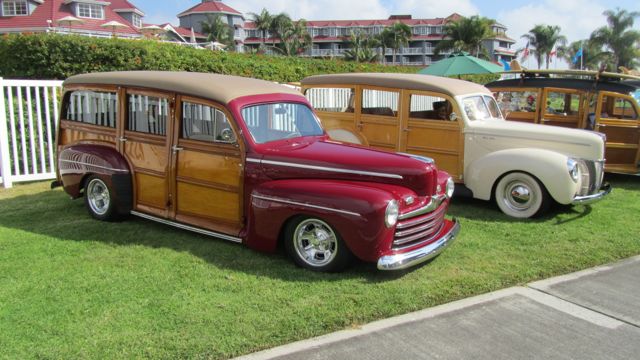 Another perfect pair of woodies would be these two. Jeff’s 46, built by the late Don Thelan, started it all for me. I still have the issue of American Rodder (November 1992) that featured this woody. 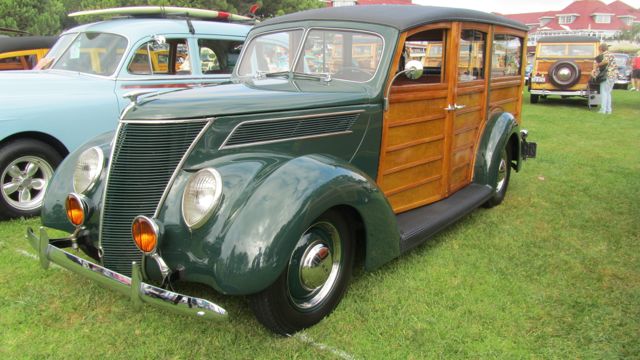 Mark drove over to see the cars in his primo 37. I believe this car came from the east coast a few years ago. 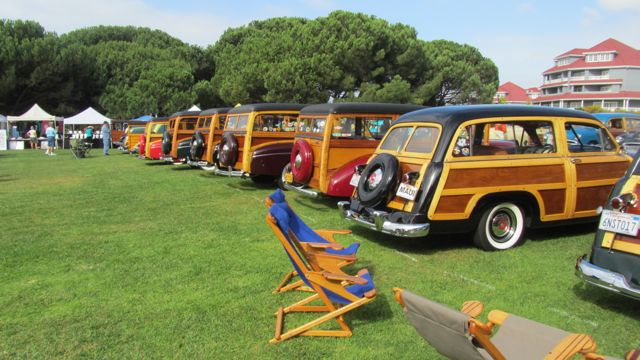 I show the rear view prior to all the tailgates that came down and umbrellas set up for some serious relaxing and BS. The Shorline chairs were beautiful and matched the woodies perfectly. 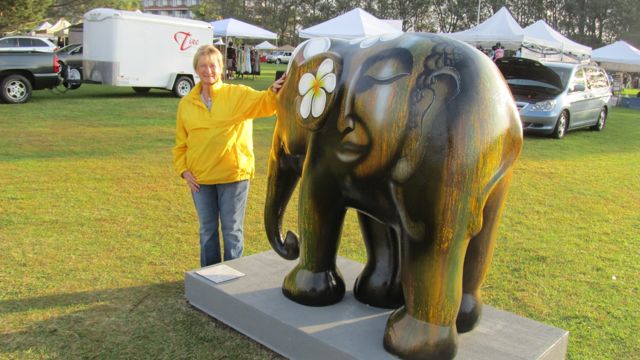 Jane loved the Elephants and thought we should purchase one for the backyard. These guys were everywhere. 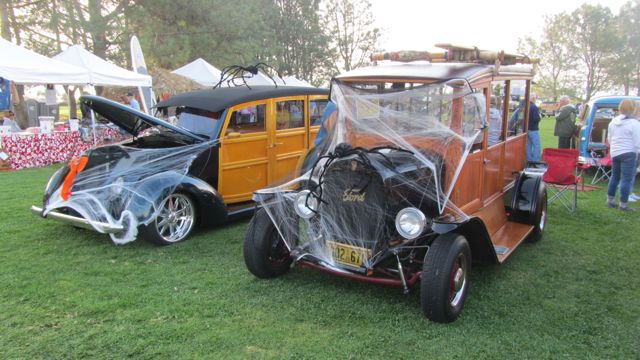 Several cars were decorated with Halloween themes. These two caught my eye as the best.