The season is in full swing in LA. The Central Coast area had a couple of great outings this past weekend and Hot Rod Steve attended them in his forties. Steve has the sickness like I do and attends most of the events for traditional cars. He sent along some nice photos of the cars on the runs.

NSRA had a huge 400+ car show at California Car Cover on Sunday. While rain threatened the early hours, everything turned out great. This event grows larger every year. Jim knows how to organize a great event and the Roaming Relics handle the details… Jim does the rest. The food line goes very quickly and he has lots of tables for us old guys to rest a while. Thanks, Jim and his staff for a great day.

My friend Tom brought home Bob O’s new 40 coupe (which he used to own) and ran into snow on the Grapevine. The coupe looks better than ever and I have some photos for you. How many of you wish you had kept some of your cars? Bob O has repurchased two of his old rides. Now it is time for a bigger garage.

This week will be a busy one for me as I have a fellow taking out the center trans mount in Andre and installing the new dropped axle. NO, I am not helping just supervising… 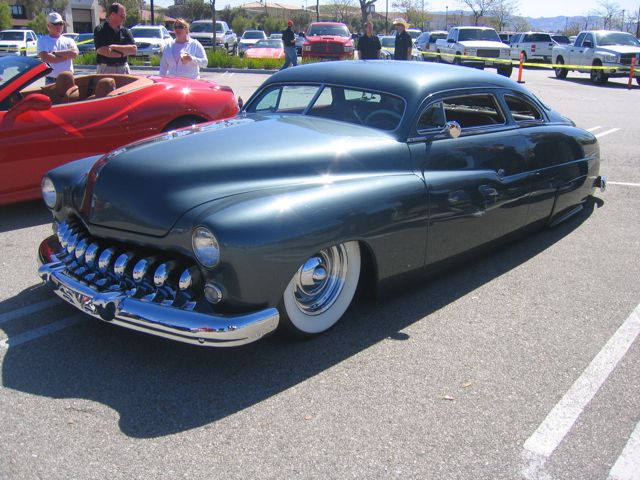 On Saturday, at our local mall, this very nice chopped Merc showed up and while not quite finished it was very tastefully done. 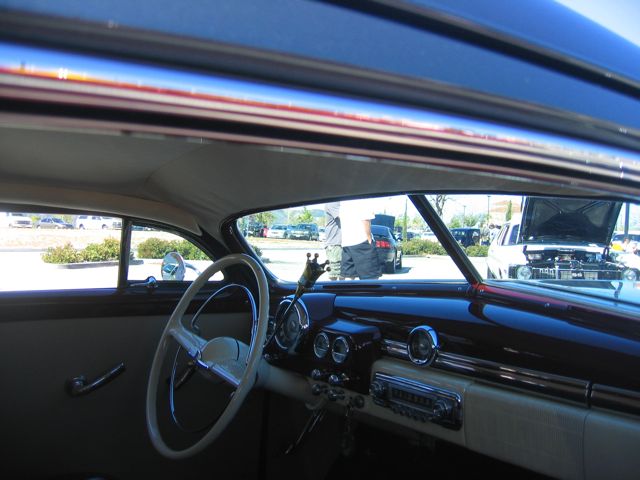 Dash is simple and the amount of chop is evident in this photo. Maroon roll and pleated interior went well with the dark gray exterior. I rode in one of these for many years in high school. 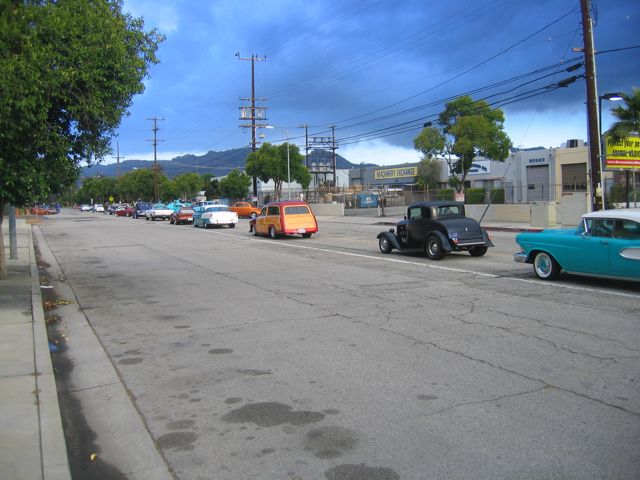 Early morning line up to the show. I like to arrive early to get the good photos. This area was full of cars by 8:00 am. 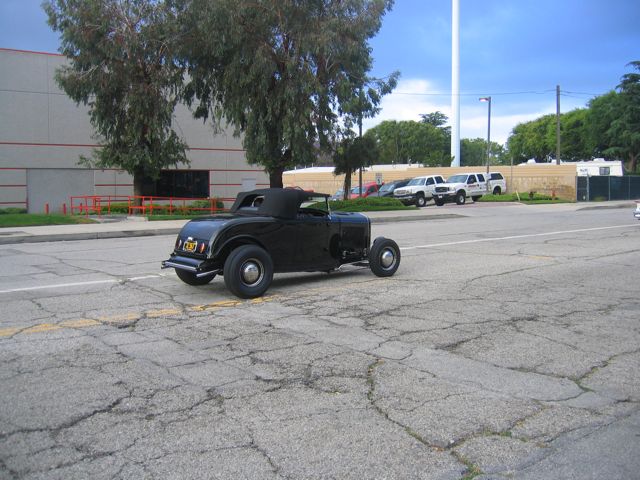 All black roadsters are my favorites. This real deal is a local car with all the good stuff except the Bop Top. A very traditional car and he drives it everywhere with a great sounding flathead. 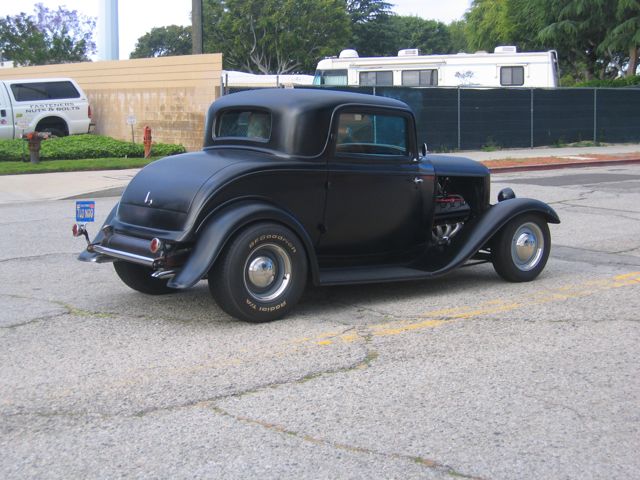 No show would be complete without a 3 window in primer. This real deal has a 392 Hemi and sounded like he was ready to race. 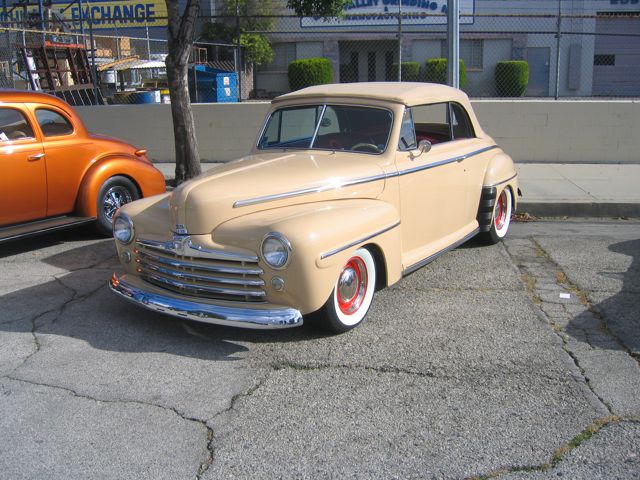 I have a weak spot in my heart for these convertibles. This Frantic and owner built car starts the heart beating a little faster each time I see it. The color is a commercial beige and is offset with red steelies, white wall tires and a maroon interior. Nice job. 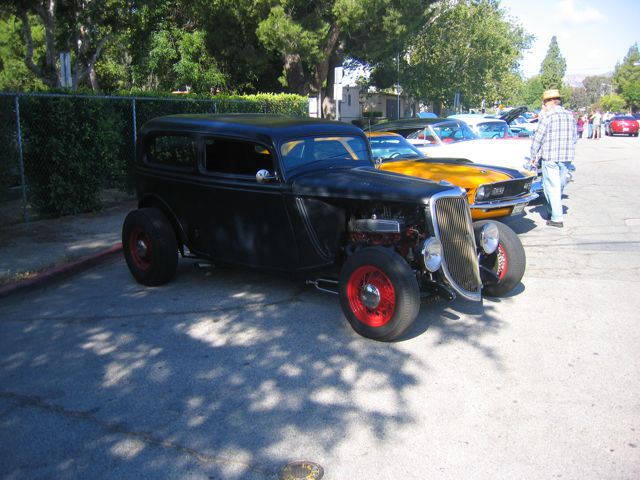 Not often seen in a hiboy form, this 34 was under construction with a fresh nailhead engine and lots of primer. 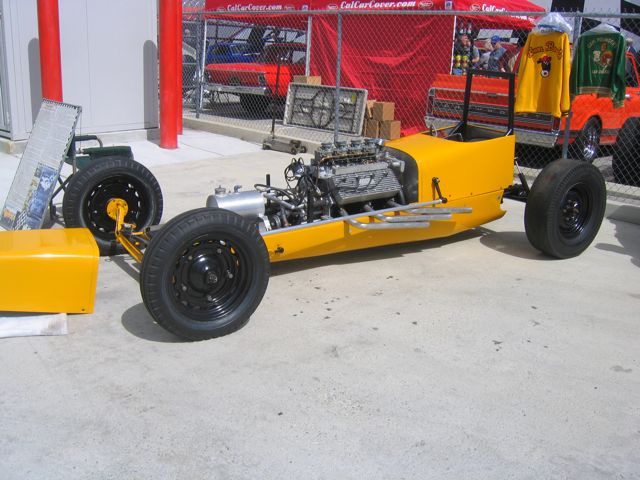 The Bean Bandits were originally called the Pan Draggers and have been around since 1946. This dragster was a wonderful site to see. A club member was on hand to describe how the car was built and maintained over the years. Top speed was 165mph with the flathead engine. More on Friday. 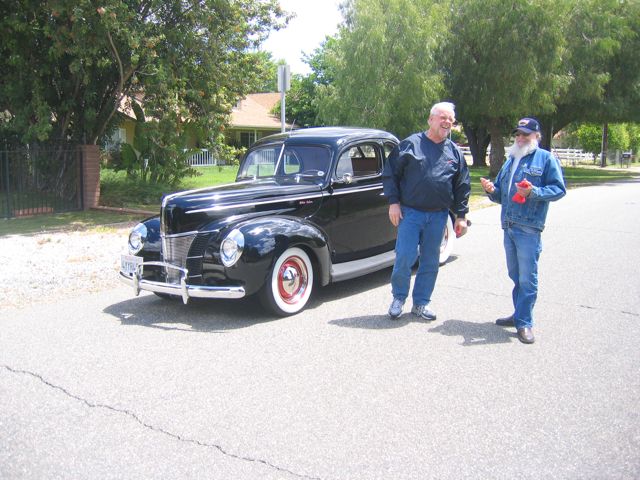 Tom was reacquainting Bob with his old 40 coupe. Tom has detailed the car and it never looked better. I wonder if Bob O got any sleep last night? 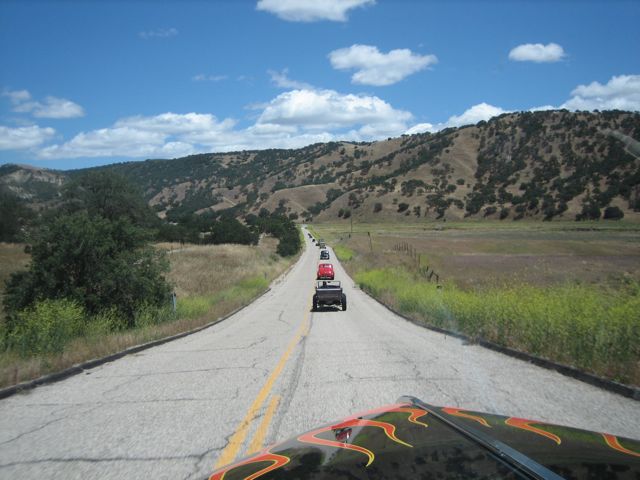 Steve and his friends are driving in a very scenic place on the Coast of Central California. I am jealous.
I hope Steve wasn’t driving when he took this photo over the hood of his flamed sedan.