Some weekends are really just average and sometimes they turn out to be very special. Â My wife and I had a very special time attending the 32nd Wavecrest Woody Show on Saturday and the 30th Outrider’s Picnic on Sunday. Â Both events are two of our favorites and always attract top notch cars. Â We started out early Saturday morning (4:30 am) and headed for Encinitas, CA which is 200 miles south of our home. Â The trip was the first for Ruby with here new components and I am happy to report she started every time even after being in heavy traffic for several hours. Sunday we also headed out early to the Outriders show in Irvine, CA. Â The venue is one of the best with plenty of shade, grass and lakes. The quality of the cars at both events were outstanding and they were both very well organized. Â We really enjoyed the events. Â The total weekend mileage was right at 700 miles and Ruby purred like a kitten the entire trip. Â It is nice to have a dependable car when you are going on long trips. Â Jane and I are very thankful to Walt and Lorraine for the use of Ruby for these events.

The Throttlers Show was also very nice with the traditional cars out in force. Â I don’t have any photos from the show but I am sure there are some on the Jalopy Journal. Â Bob O attended the show and he liked what he saw so I know there were some nice cars in attendance. Â We still have several shows to attend before the year end but this past weekend was the end to a perfect summer of Hot Rod activity for Pewsplace. Â I would like to thank all of you who stopped by and introduced yourself as readers of my daily blog. Â I appreciate you comments and ideas. Â I will continue to write about my passion for Hot Rods in the future and hope I can contribute to those who don’t have the events we have in SO-CAL and to those locals who can’t attend the ones we do have.

The past weekend was one of this year’s highlights for my wife and I and will be a wonderful memory for us for years to come. 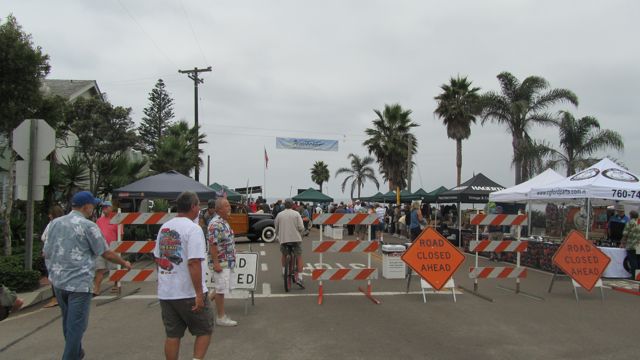 The street is filled with vendors and the registration booth. Â Woody events are always free and you receive a nice goody bag filled with some great stuff. Â That is Walt and Jim headed for the raffle ticket booth. Â I wanted the surf blanket but didn’t win anything as usual. 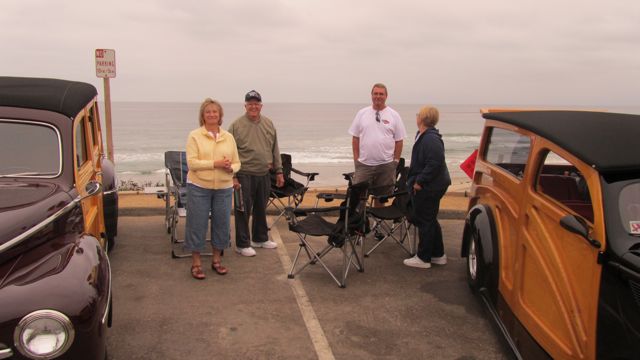 Here is are super parking spot facing the Pacific ocean on an overcast morning. Â Jane, Jim, Jim and Lorraine were getting ready for the day after the long ride to the beach. 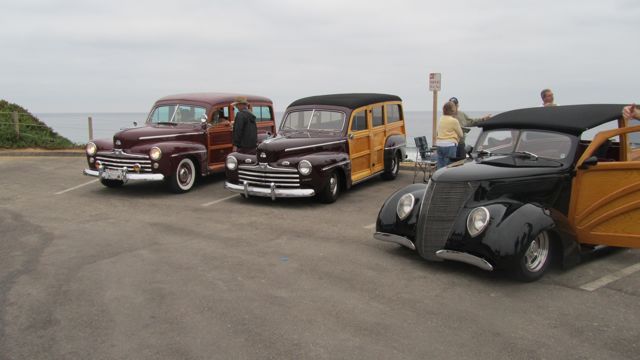 An early morning photo of our arrival. Â We were lucky to have such a great spot to park. 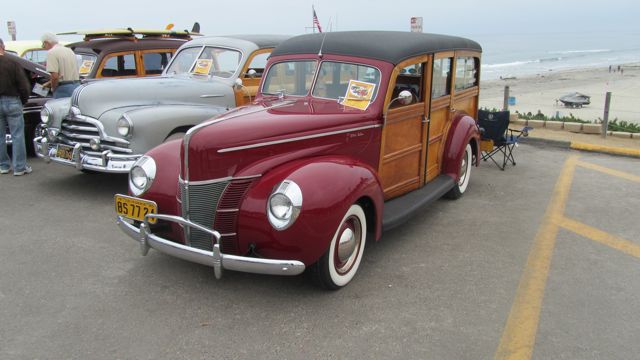 Stan was parked a couple of spots over and it turned out I used to live a few door from him in Laguna in the 80’s. Â Woody folks are the best. Â His 40 has quite a history. 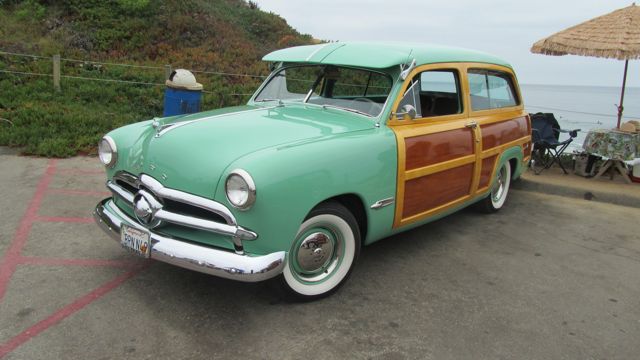 The 49-51 Ford Woodies were out in force and were all done to perfection. Â Some were stock, some were modified and some were waiting for the restoration process to begin. 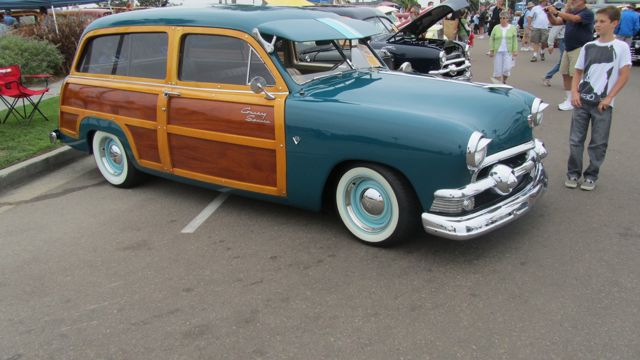 This 51 was one of my favorites at the show in the shoebox entries. 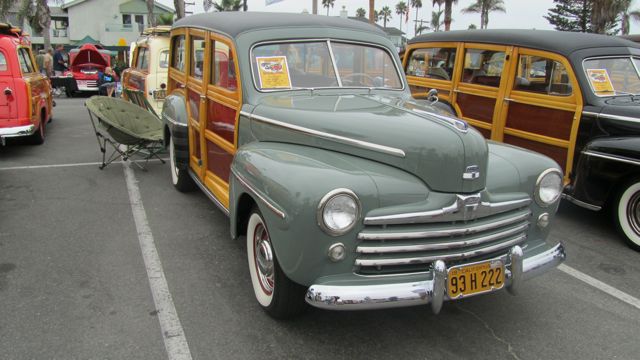 Tom had one of the best Woodies in the show. Â Nick Alexander did the restoration and it is flawless. Â He drove to the event and said it runs 65-70 mph all day long with the flatmotor and the Columbia. Â My wife loves the color of this one. 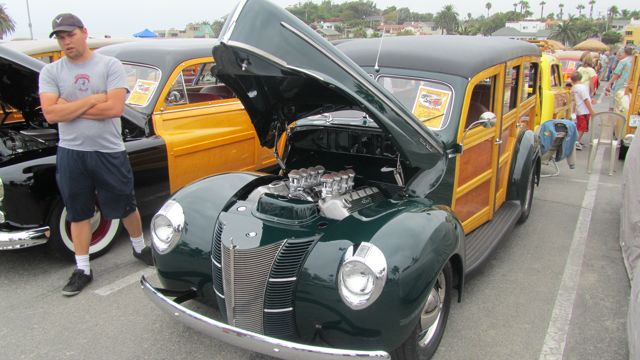 The number one pick of the Hot Rod Woodies was this gorgeous BRG 40 with the Ford Cammer engine. Â Wheeler’s in HB built the car and it is over the top with detail. Â Jeff owns this one and the R&C Mercury with the Ardun parked next to it. 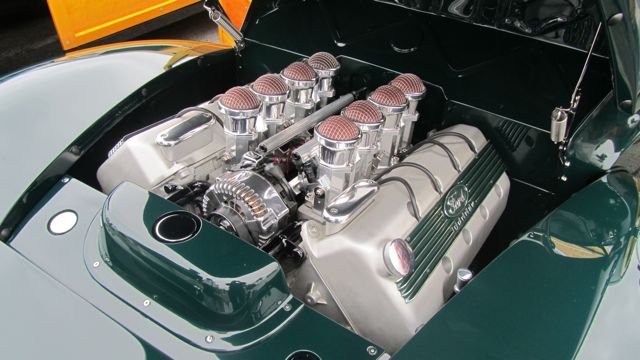 The engine is so clean you could eat off of the intake manifold. Â There was nothing cut that I could see but the heads were real close to the inner fender panels. 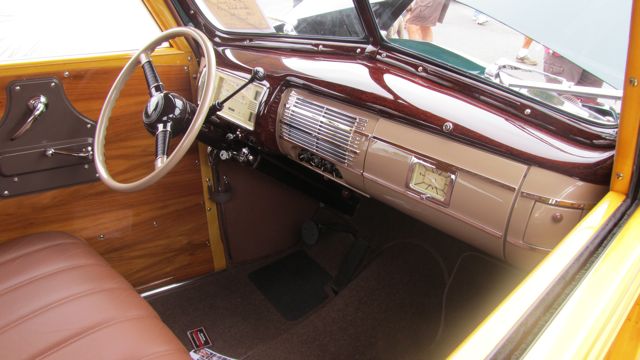 The interior was full of tricks. Â The Classic Instrument panel was unique as were the A/C vents in the ash trays. Â The grille section folded down to reveal a full DVD/GPS system. Â Note the radio hole has been filled and that’s O.K. by me. 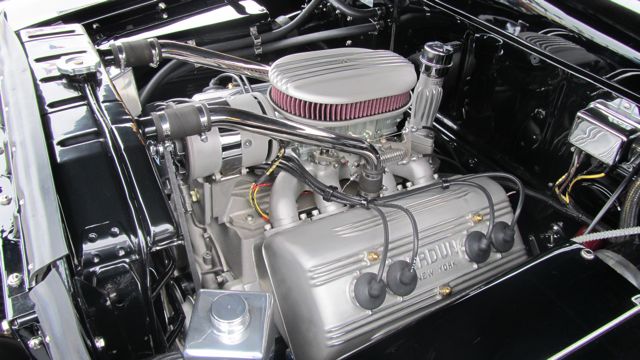 Jeff’s 49 Mercury had a new aluminum Ardun equipped flathead installed by Wheelers. Â R&C has been doing a feature on this beauty. Â The detail of the installation was really clean and well thought out. 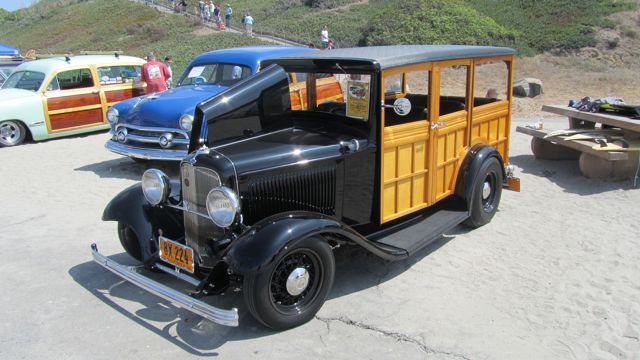 Gary bought his outstanding Deuce Woody to the 32nd Wavecrest Show and parked it right down on the beach 50 feet from the water. Â Outstanding paint and woodwork made this a must see at the show. 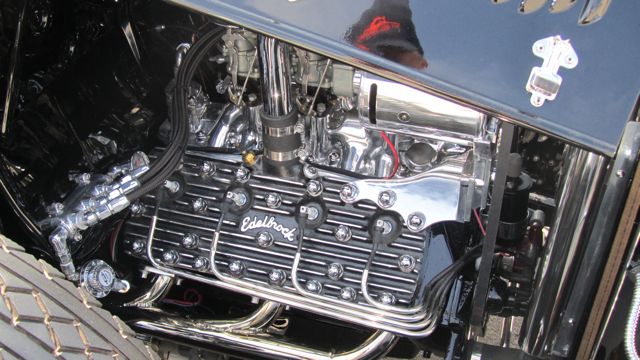 The highly detailed flatmotor looked correct in this magnificent Woody.