The wife and I had a wonderful trip to Santa Barbara on Friday and met some nice people who also like forty Fords. Â Chris had placed an ad for some parts and I made the effort to go see what he had for sale. Â It seems he purchased this mint, rust free tudor many years ago Â and made it into a very nice hot rod. Â He kept all the original parts in storage and finally decided to sell them. Â I have been looking for a front seat for a long time and he had one that came out of his sedan. Â I was very pleased with the condition and have been working for two days getting it ready to install in Andre. I also picked up several other parts that I needed. Â All in all the trip was very beneficial to me and the wife as she go to stop at the mall and do some shopping. Â I love people who keep the good stuff they take off their car instead of throwing it away. Â Thanks Chris for your help in loading the heavy seat.

The weather has been very, very hot in LA and I heard it was very hot in P-Town also. Â  Steve took photos of some of the cars he liked and since we like the same type of cars I got to see what I wanted and never left my house. Â I expect some more photos today of the big event on the West Coast.

The weekend was spent trying to diagnosis a hot start problem that Ruby is encountering. Â I have read many articles on the net and talked to several people at the office and have several fixes to try this week. Â The number one cause of a vehicle not starting when it is hot is the fuel percolating in the lines prior to reaching the carburetor for distribution. (Vapor rather than fuel) Â The second most common problem is resistance in the battery cables due to poor grounding, excessive heat and/or the wrong gauge cable being used. Â I think the problem is the proximity to the exhaust system causing too much resistance which prevents the amps from reaching the starter solenoid. Â Fred told me he fixes the problem with new cables and a ground strap from the starter to the chassis. Â Ron Francis sells a relay for the common Chevy “Hot Start” problem but Fred doesn’t think that is the problem. Â I love challenges and I will let you know what I find out. 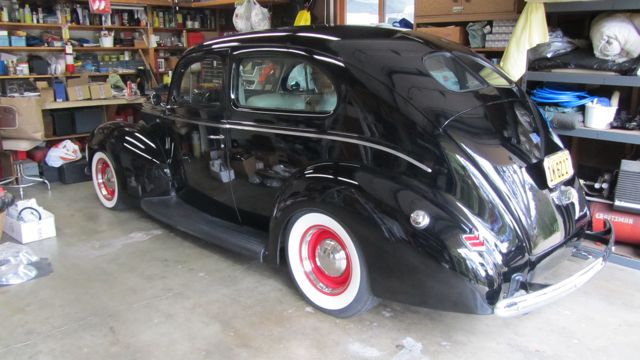 Chris this super tudor in his garage over a period of years and kept all the stock stuff he didn’t use. Â I love sedans. 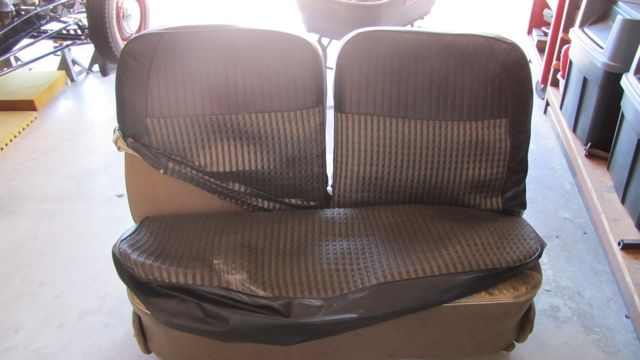 Here is the seat back in my garage. Â Note the many seat covers that had been installed. Â The original fabric was worn but not bad in today’s Patina lovers age. 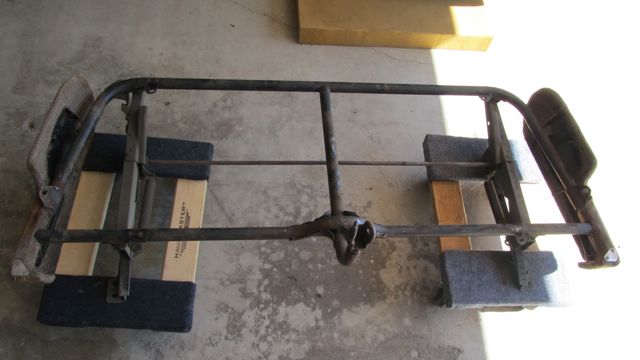 I had to disassemble the seat as the driver’s side had a broken rear weld that was caused by a heavy driver over the years. Â I re-welded all the poor factory welds to make sure it doesn’t break in the future. Â I admire upholstery guys who use their hands to remove all those hog rings and staples they use to hold the material to the tack strips and springs. Â I spent two days getting the covers off and removing all the hog rings. 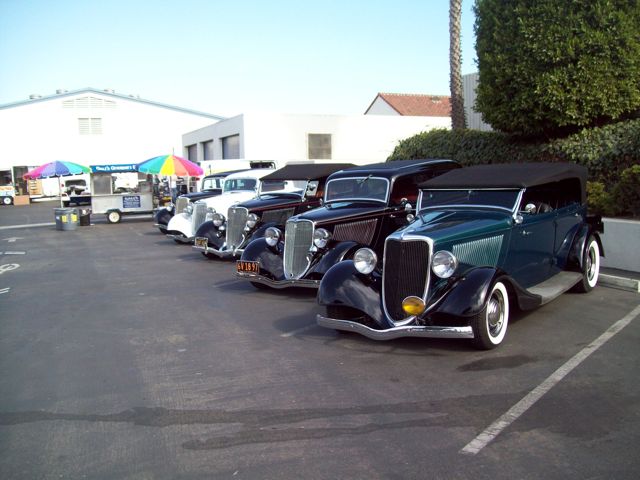 Dave sent along a photo of the model 40 group in Camarillo. Â I want one of each as shown above. Â Two phaetons, two sedans and a coupe. 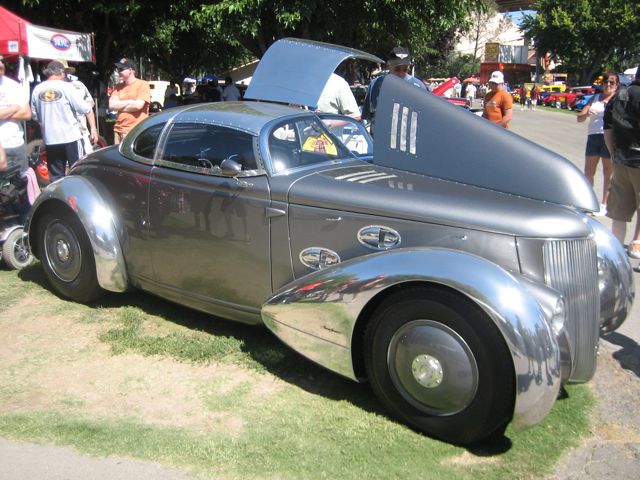 Moal’s booth always has one of the best cars at P-Town and this year was no exception. Â It looks like a 36 but I believe most of the car is hand built by the craftsman at Steve’s shop. 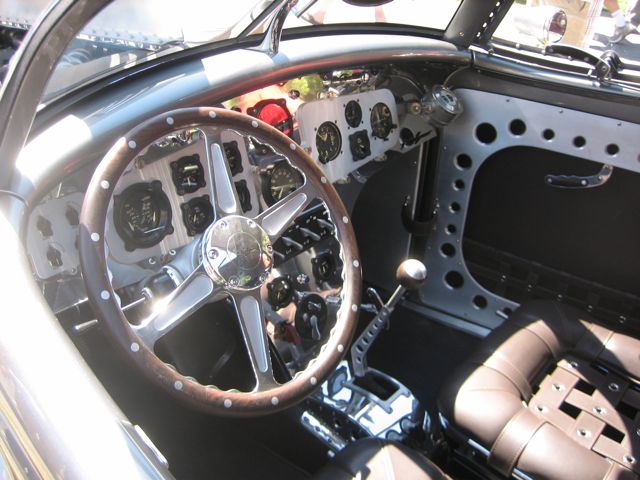 This is not the interior of an airplane but the 36 Ford pictured above. Â Note the seats. 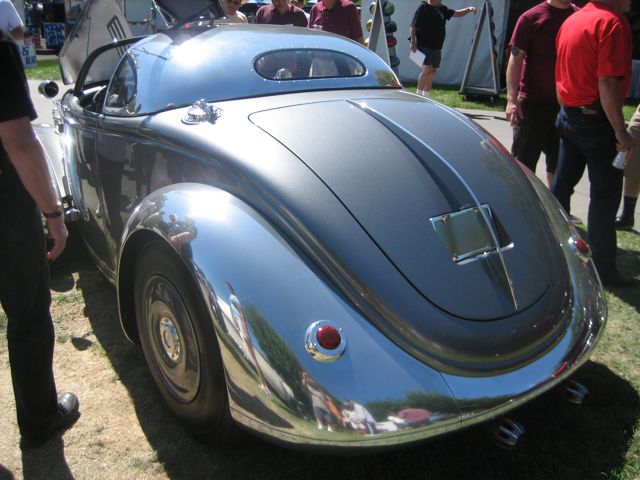 The rear view of this piece of art reflects the talent of the metal working geniuses that work at Moals. 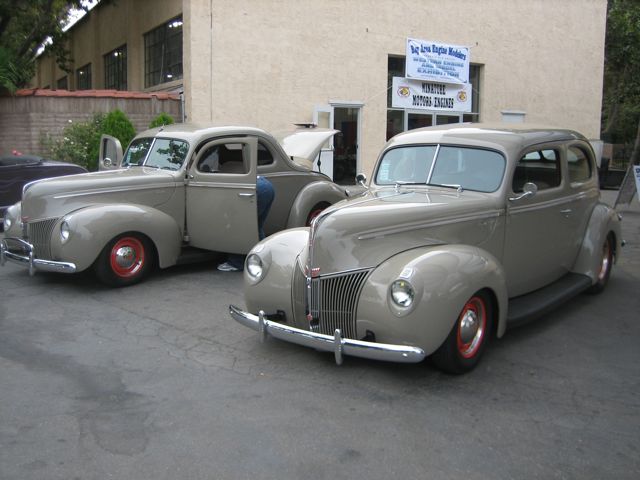 Steve loves 40 Fords and here are two of Orville’s recent builds now owned by the same man. Â Which one do I drive to the “Office today? 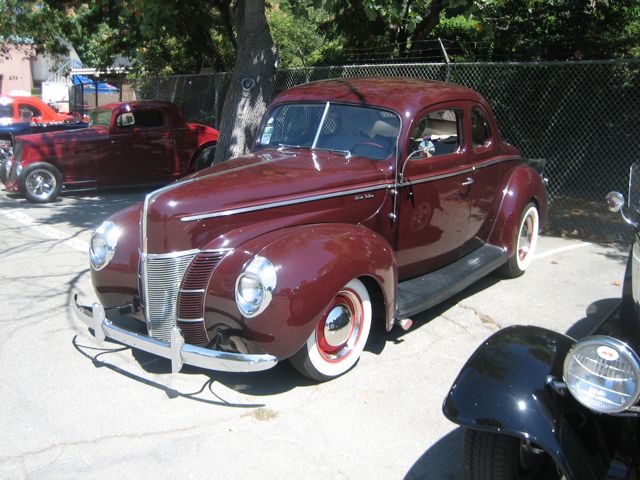 I love the cut outs peeking out from under the running boards on the maroon 40 coupe. 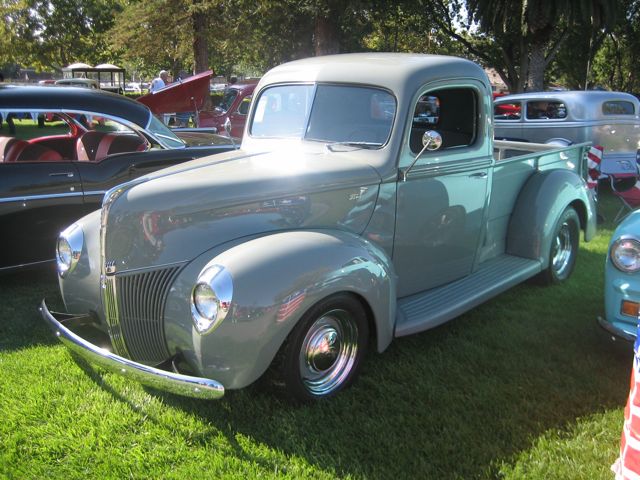 Folkstone grey seems to be the color this year and CMG was a close second. Â There is something about a 40 pickup that attracts most forty lovers. 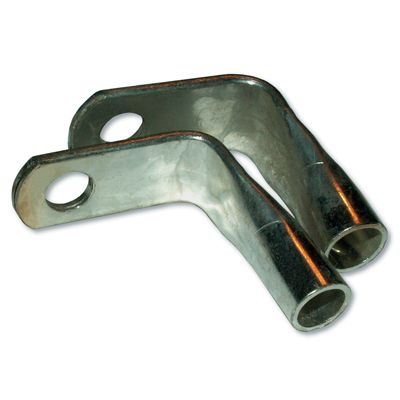 These Ron Francis 90 degree battery cable connects allow you to route you cable along side the solenoid rather than near the exhaust. Â I ordered some of these to see how they work when installed. 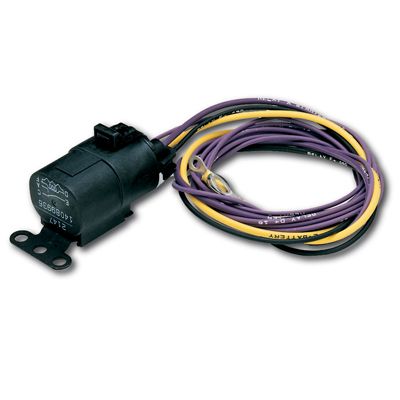 Ron also sells this “Hot Start” cure relay for you to install. Â The relay absorbs the load versus the starter solenoid. Â Sounds like the old Ford flathead. 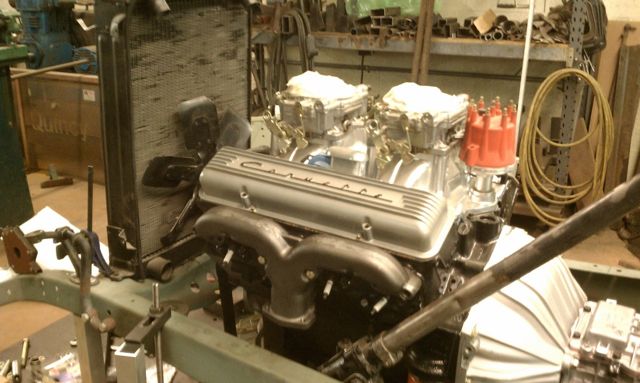 The traditional looking 327 always looks good in a Deuce. Â I wonder if the Corvette 2 1/2 inch rams horns are the Speedway reproduction models or real ones. Â The don’t have the generator bracket on them and appear to have never had them. Â I want a set for Andre.