The weekend was picture perfect and definitely roadster weather. Â Sunday was B&E’s open house so I headed over to Chatsworth to see what was going on. Â Upon arrival I noticed that Don and Dave were already parked and just setting up their spots. Â I pulled Ruby next to them and after quickly wiping off the dew started to walk around a look at the cars. Â Most of the cars are later model but there were a few real nice hot rods also. Â I parked in the Performance Restoration lot and made an effort to look at the Carson style top that they were doing on a Deuce roadster. Â I learned a lot from the owner who explained how he shaped the foam over the aluminum top. Â I will need to do the same for Lucy.

I walked over to the B&E side and ran into Chip my long time friend who drove over in his 61 Corvette fuel injected cream puff. Â We walked the entire show, had a super Taco lunch and then headed home. Â Thanks to Bobby and Eugene for holding this nice event. Â I spent the rest of the day working on Lucy’s top which still needs some final shaping.Â I think I will cut some of the tubing and make a new piece rather than trying to bend the previous pieces.

My big disappointment came from watching the Lakers loose the first game in the first round. Â Kobe really took a fall which could be a bad sign for the boys. 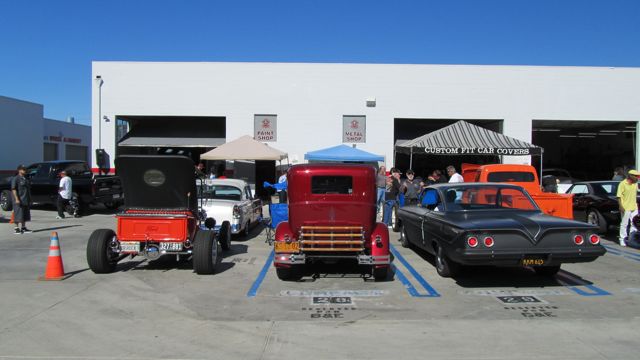 B&E has a spacious facility with a separate space for Paint, Assembly and Body work all of which are kept spotless all the time. Â You would not be afraid to leave your car at this facility. Â That is Bobby parking the Chevy. 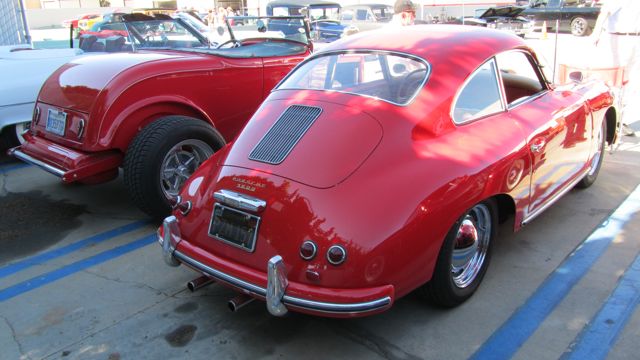 Don was parked next to this 1956 356 Porsche that was very nicely restored. Â The black plate made it special along with the tail lights. Â Bill would have liked this one to add to his collection. Â Don’s Deuce is painted Hot Rod Red and the owner called his Porsche Red and they were the same color in my eyes. 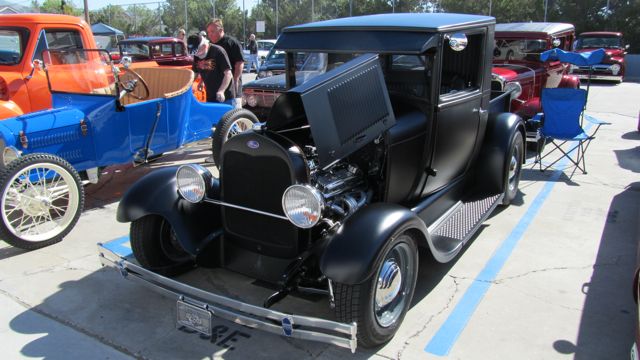 B&E just finished this little 29 phone booth pickup which was powered by a SBC and auto transmission hooked to a nine inch rear. Â I do believe this is the most common drivetrain in hot rods. Â They do work perfect and are very serviceable at any NAPA auto store. 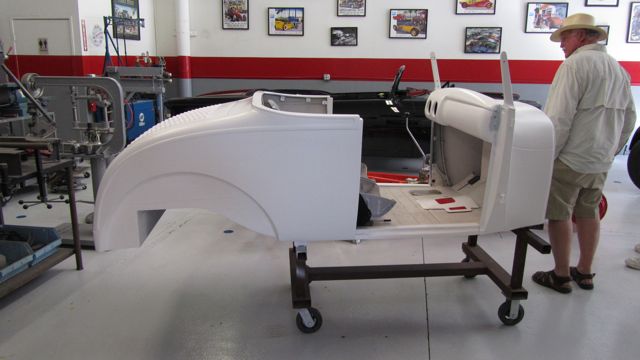 The 29 is finally ready for paint after under going major body modifications by Bobby. 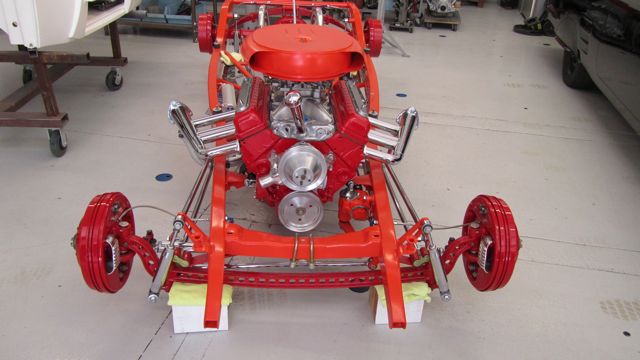 The body goes on this Kiwi chassis with early components and a SBC with Olds valve covers. Â The brakes are highly detailed early Ford. Â Note the multi-hole drilled axle. 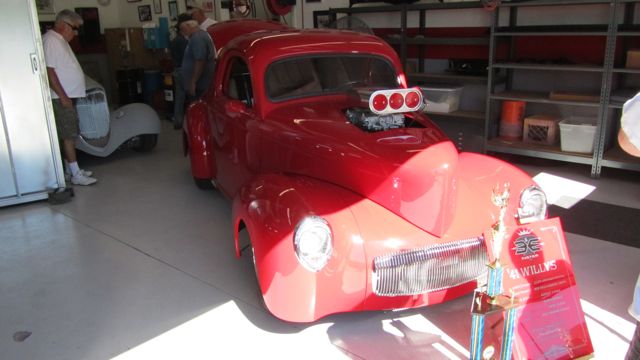 Another B&E creation was this GNRS Winner 41 Willys that was detailed to the maximum and had a fabulous interior. 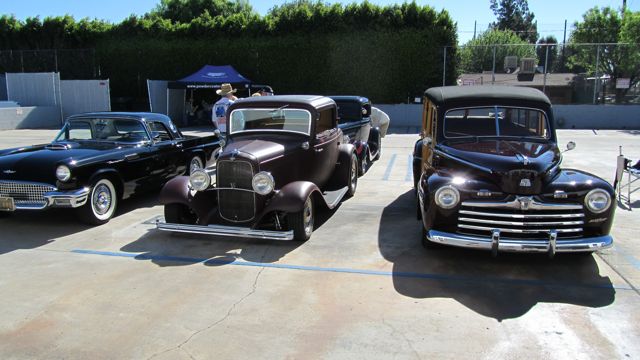 Ruby felt right at home with Dave’s Deuce 3 window parked by her side. Â The super slick T-Bird is SBC powered. Â See what I mean! 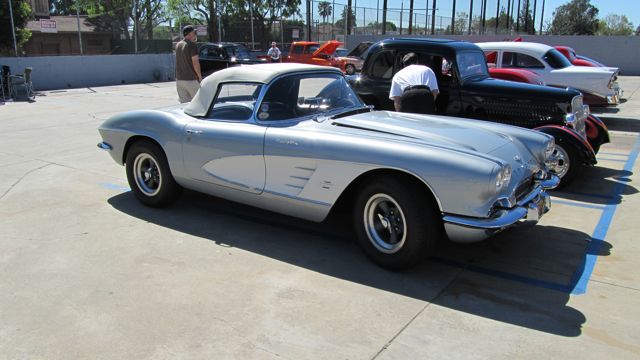 Chip had one of his fleet of Corvettes in attendance. Â This is a 3 owner CA car that is a true survivor and very fast with a FI under the hood ( just the way it came from GM). 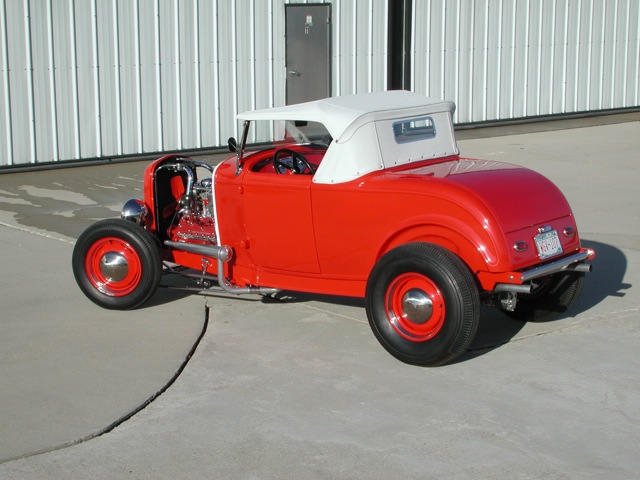 This little Deuce roadster with the flathead mill and QC comes from the Midwest. Â It has all the right stuff and Jim drove it to the LARS a few years ago and marked one off his bucket list. 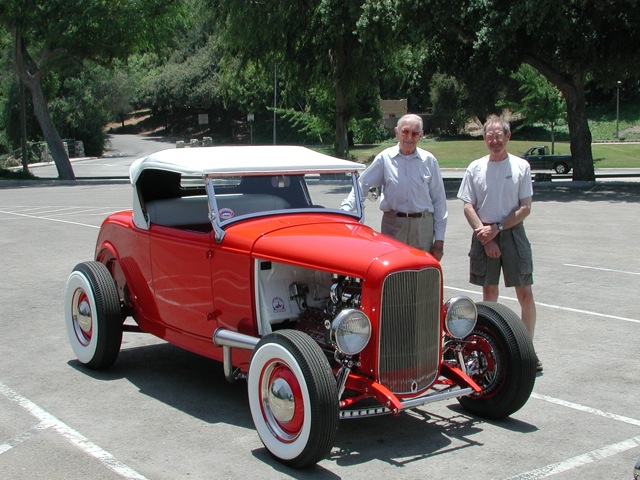 Jim stopped in for a visit at the NHRA Museum and hooked up with the man himself “Wally Parks” who came out for a photo shoot. Â The roadster reminded him of his own 29 that is still in the museum. Â Great photo of two great people. Â The flame is still burning in this scene. 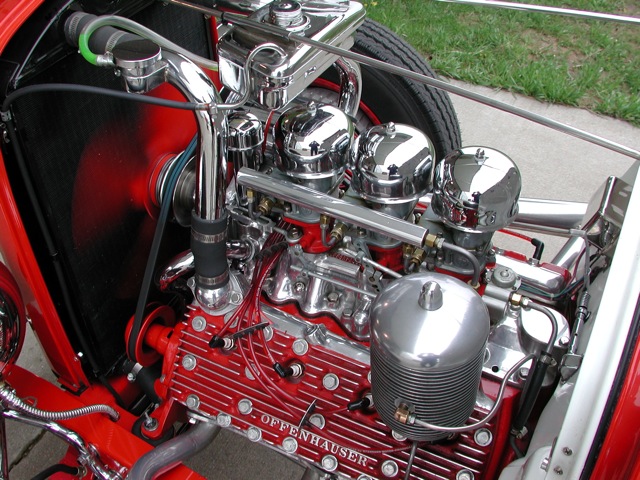 Who said flatheads are not dependable? Â Note this is a photo of a running motor…can’t you hear it purring? 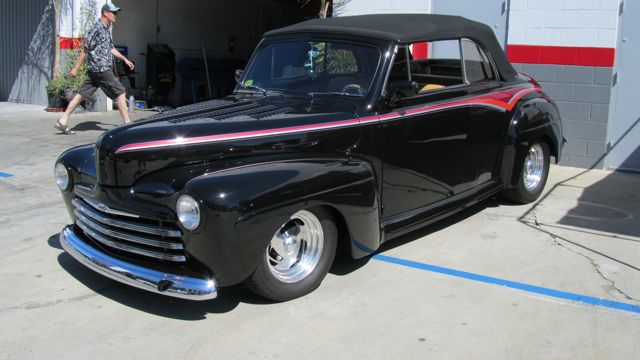 A local fat convert which has been done for a long time. Â Frantic has this one in his shop from time to time and it is a very nice ride.