WOW! Â Great football, 85 degree weather and yes, the Golden Globes. Â Obviously, I did not spend much time working on the cars but did manage to finish building the rear jig for Andre. Â I still need a cross brace from the rear crossmember to the uprights but I should finish that this week. Â MLK day began with a call from Bob who wanted me to come to the “Office” on my day off to see his brother’s 40 sedan since he has updated the car. Â You might recall I assisted with the sale of the sedan (which I always liked) to Steve a couple of months ago. Â I grabbed my new Canon and headed to work. Â I arrived and the car was staged for some great photos. Â I grabbed a quick cup of coffee (no donut this year) and took some photos. Â The car really cleaned up nice and Steve can be real proud of his nifty fifty 40 sedan.

I spent the rest of the day waiting in line at IMS for my much need supplies for the jig. Â I finally came home about 4:00 pm and called it a day. Â Some days seem to fly by without much getting accomplished. Â I think it was the same way when I was working. 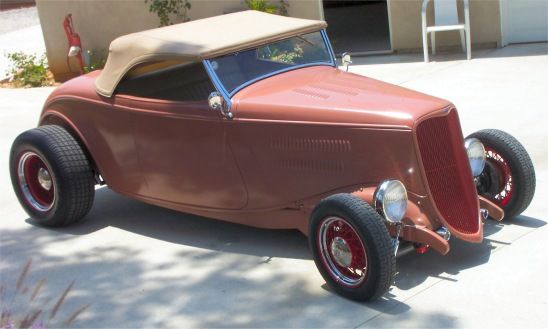 I found this on the net and it sure looks like the one Gearhead Bill built a few years ago. Â The ad reads new build but I am checking it out. Â Mine could look this good if I would get busy and do something. 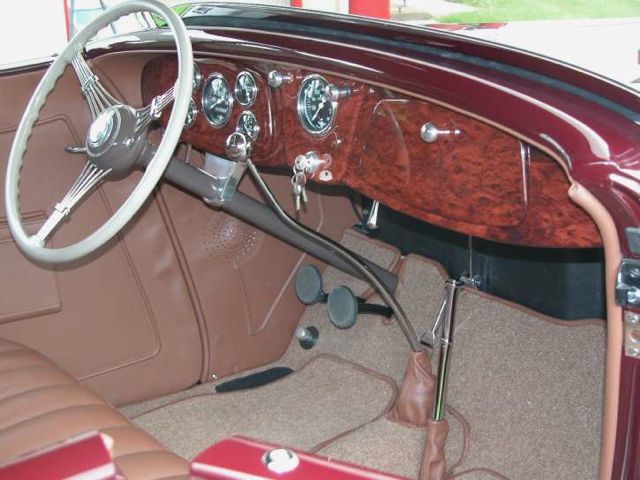 This is a Lowrey built roadster that has nice dash with a 39 Banjo wheel and woodgraining. Â Nice early look. 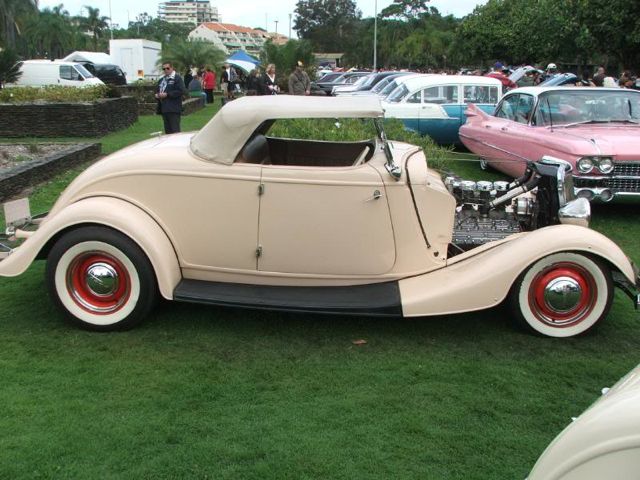 Here is a good example of the Australian Ford built 34 roadsters. Â Note the panel between the reveal and the running board as opposed to no gap on the American built roadsters. Â The body sits on top of the frame. 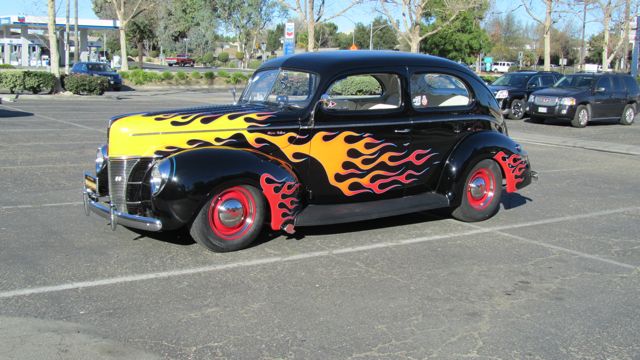 Steve has his 40 sedan over the hill at the” Office” today. Â He has made the car his by changing the wheels, tires, pinstriping and upgrading the stereo (MP3 player). Â He loves the car and is driving it a lot. 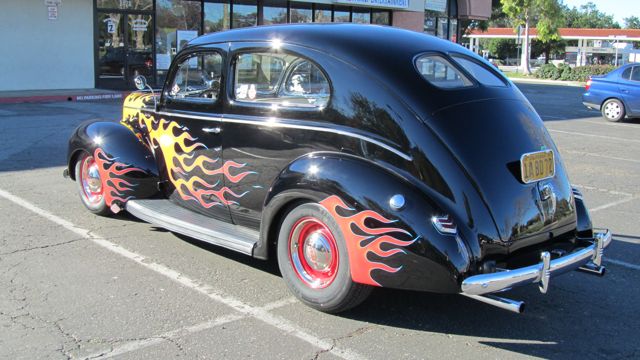 The rear view is nice and those pipes do cackle when he hits the gas. 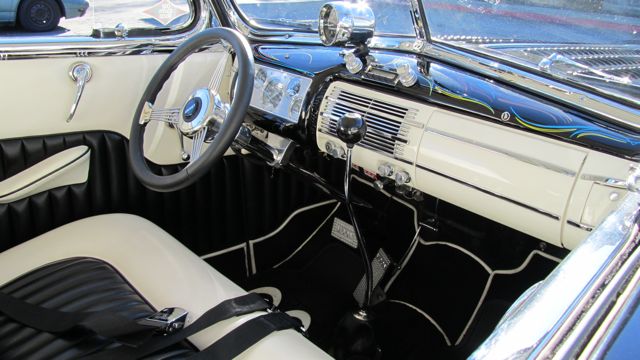 The Eddie Martinez interior looks fresh after some good old fashion cleaning. Â The glovebox is soon to be replaced with the correct clock model from Drake. 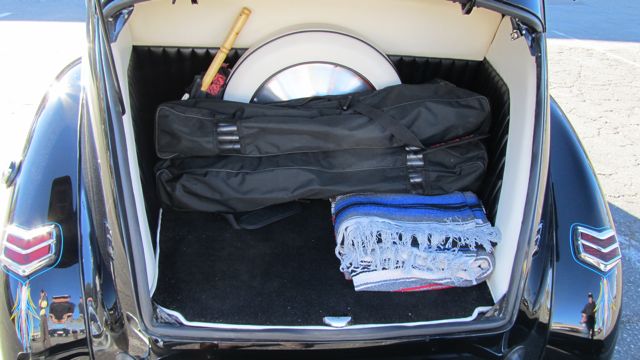 The trunk is fully finished and ready to go on the long haul with standard equipment spare tire and chairs. Â The blanket is for the grandkids to take a nap in the back seat. 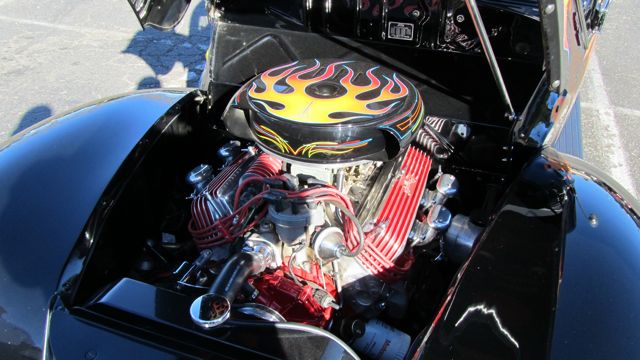 Steve is a detail man and he has spent considerable time under the hood painting and shining the crate 302/350 hp Ford motor. 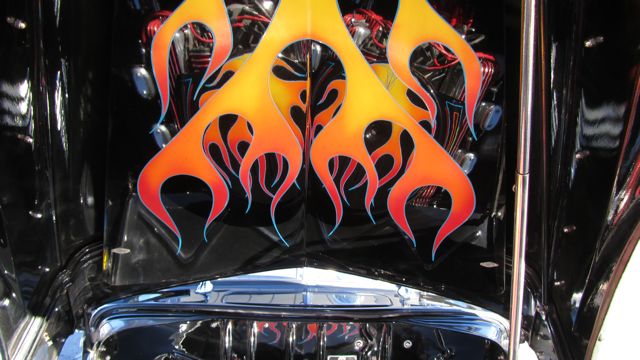 This is a photo of the underside of the hood in the sedan. Â Note the flames and the engine reflection. Â This is detail. 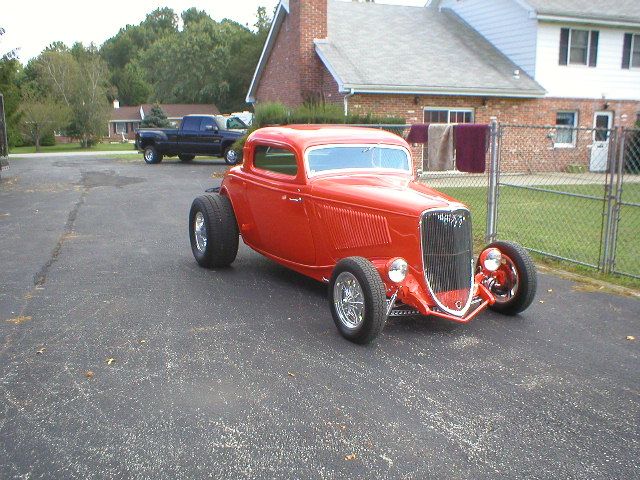 From the East coast comes this long time favorite of mine. Â This is not the West coast Vinther car but the 33 model built after Bills. Â TRJ has full feature on this beauty. 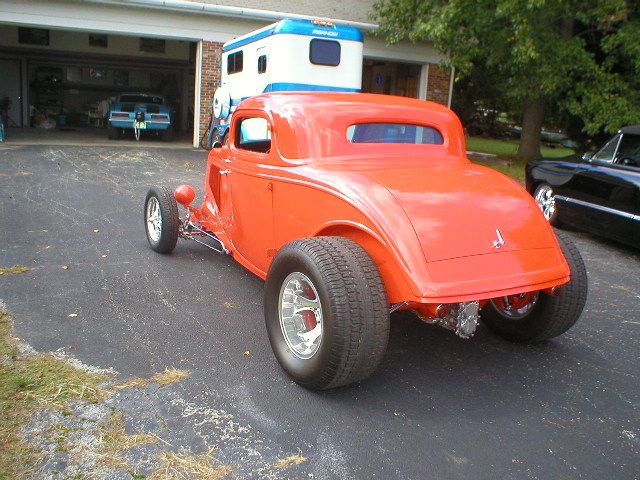 The QC is the real deal and I learned from the owner that you need to check and tighten the 10 housing bolts often and they do come loose. Â I safety wired mine to prevent the old R&P from going bad and making lots of noise from loose bolts.