It was a huge car weekend for the wife and I. It started on friday in Arcadia with a GM ride and drive activity. GM’s “Main Street” provides potential customers with the opportunity to drive both GM models and the competitive makes in the same market segment. We arrived early and had a great day driving all of the new 2011 cars.

We spent saturday at the Petersen Museum in LA looking at parts and cars. The swap meet turnout was good and the crowd seemed about right for this type of event. I had not been to the Museum since the Deuce 75th anniversary so I was happy to take the tour again. They do a good job of tracking the history of the automobile in Los Angeles showing you early dealerships, gas stations and garages where cars are being worked on. Jane and I really had a great time.

Walt called while we were walking around the Grove and wanted to know if I would like to use the Woody for the Malibu Cruise and of course, I said yes. I picked up the car and headed home in very heavy traffic. The car is very reliable so I was not worried about making it home. Once home I parked Ruby back in the garage next to Andre and he was happy to have a nice room mate.

Sunday was the Motoring for Toys event in Woodland Hills and the weather cooperated in the morning so the turnout was huge. Jane and I arrived about 8:30 am to a jam packed parking lot of over 3000 cars. I have never seen so many high end Ferraris, Porsche, Lambos, Corvettes, Cobras and many other exotics in one location. The show was free and you were asked to bring a toy for the kids toy drive. I must say the show was very well attended and organized. I had not been to this event in the past but will surely make it next year. Galpin Ford was one of the major sponsors and had some of their creations available for inspection. They build some awesome cars.

As you can see, the weekend was really filled with car activities and lots of picture taking opportunities. I will show some of the cars to you this week.

You better get your Christmas shopping done early as the stores are filled with shoppers. 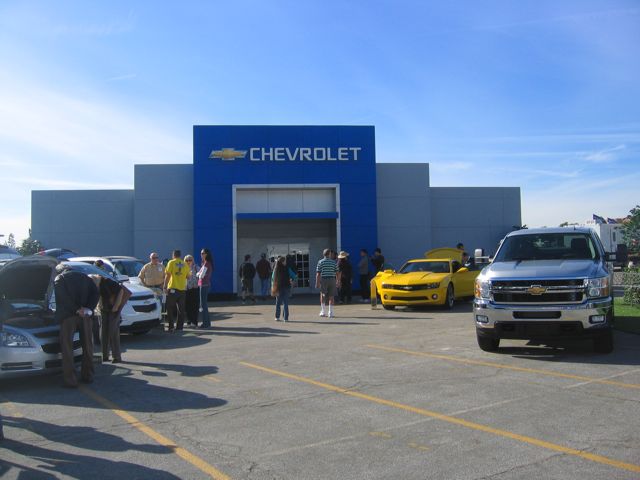 This was one of three tents set up to display the cars. The availability of new cars without the pressure of a salesman is very nice. We did this event in 1999 when I was still working and sold lots of cars. 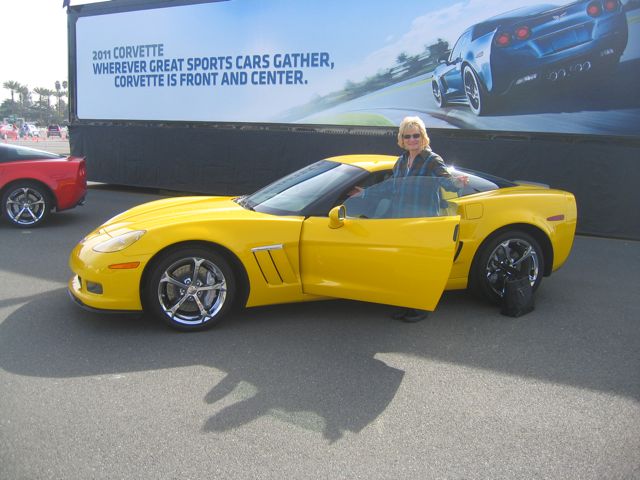 Jane picked out her new ride but there was no salesman to collect the money. These cars are really quite comfortable even for an old man like me. How do you like the yellow? 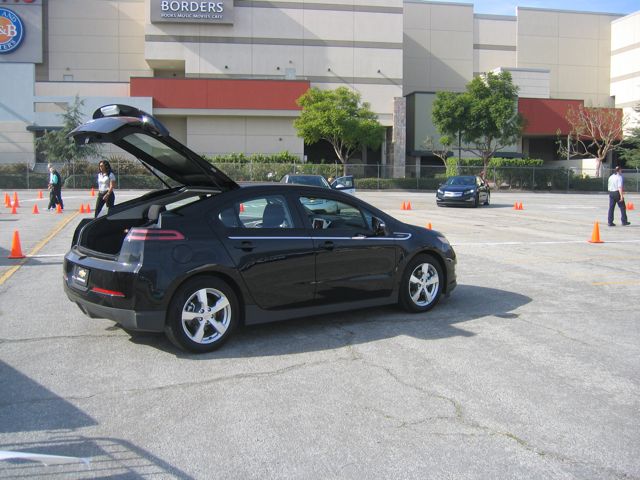 We had looked at the new Volt at the LA Auto Show but driving one and looking at one is a big difference. I am very impressed with the looks and handling of the Chevrolet Volt. I think they have a winner on their hands. The black car with the chrome trim really looks good to me. 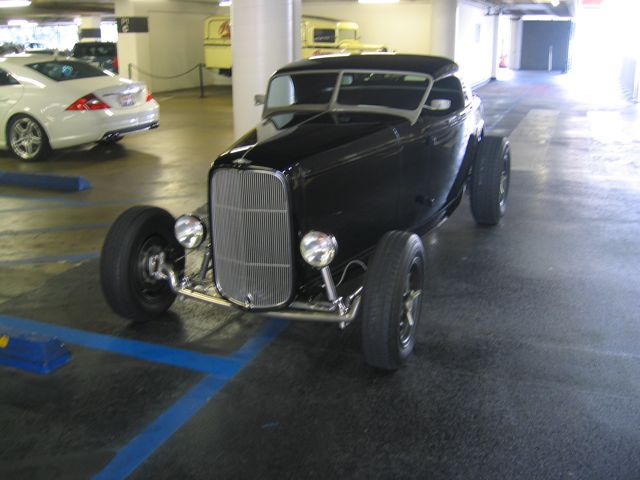 The first car you saw when you entered the Petersen was the “Double Nickel” now owned by Bruce Meyer. I have alway loved this car with a chassis by Eastwood, body by Covell and Davis and paint by Thelan. I watched this car being built in the middle 80’s when it was at California Street Rods for a Mike Hamm exhaust system. I think Canepa did the latest restyling of a very special roadster. Bruce has them all. 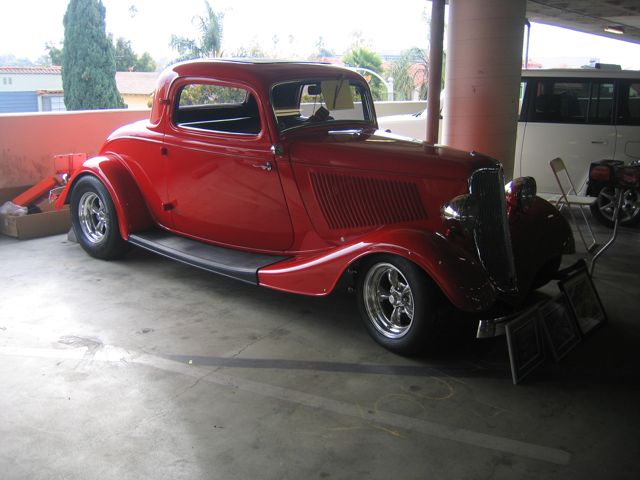 The swap meet was on two floors with cars parked everywhere. I really liked this red 3 window that was for sale. I did not ask how much as my wife was standing next to me and would fall over if she knew what these cars bring today. 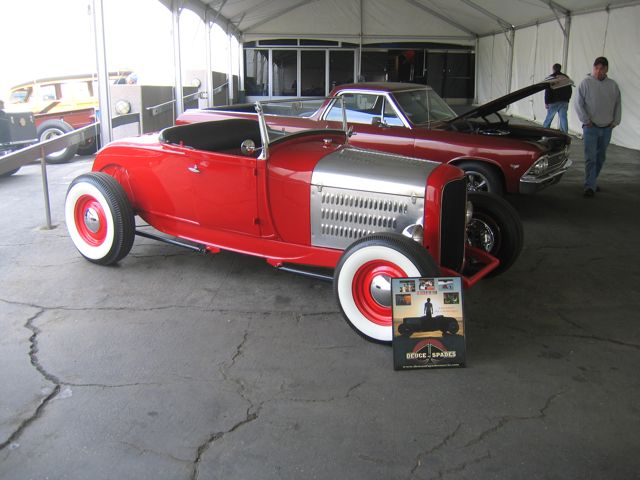 Up on the top floor were more cars for sale. The little red 29 roadster was used in the “Deuce of Spades” movie. 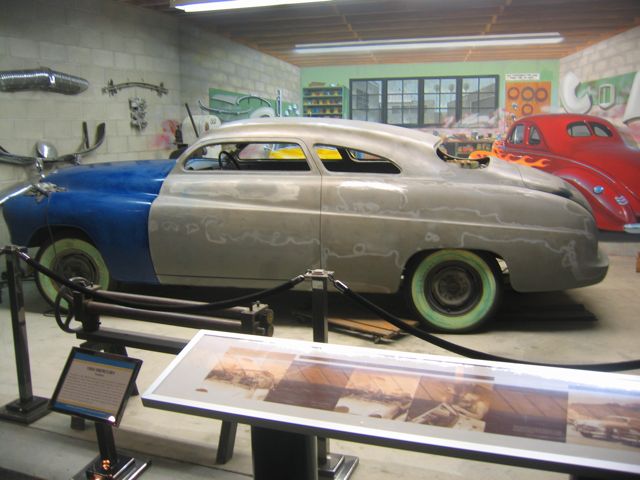 One of the garage scenes in the Petersen was this home garage with a chopped 50 Mercury in process. The metal work was flawless as was the execution of the chop. Bob O would take this one for sure. I don’t remember anyone trying to chop one of these in my home town but I am sure someone must have tried. No small job. 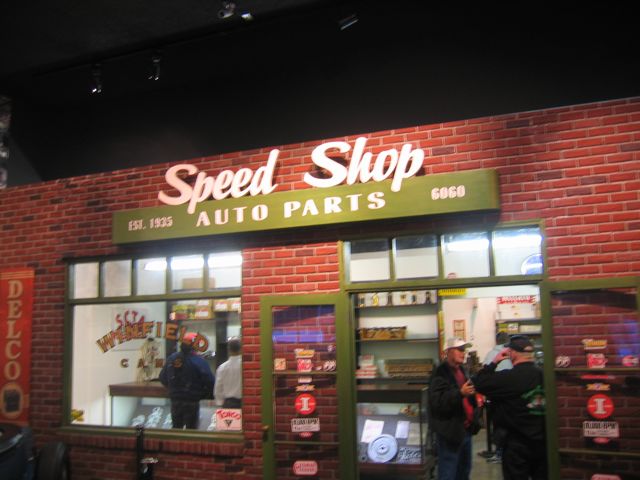 This old Speed Shop was really interesting. The person that did the set up was in the shop and explained how he did the work. I can remember these shops in my little town. Dave and I use to hang out at Mike Newell’s, Booker’s and many others hoping to learn something we could do ourselves. 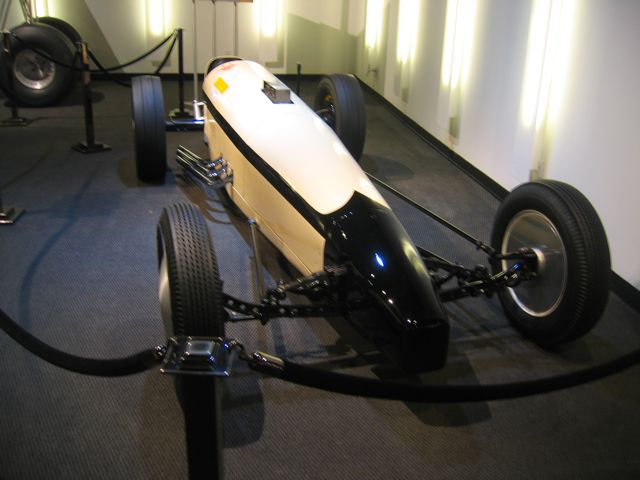 In the dragster display this early rendition caught my eye. I did not record the data but the top speed was 191.7 mph which in its day was a record. I love the simple design of the body and paint scheme. 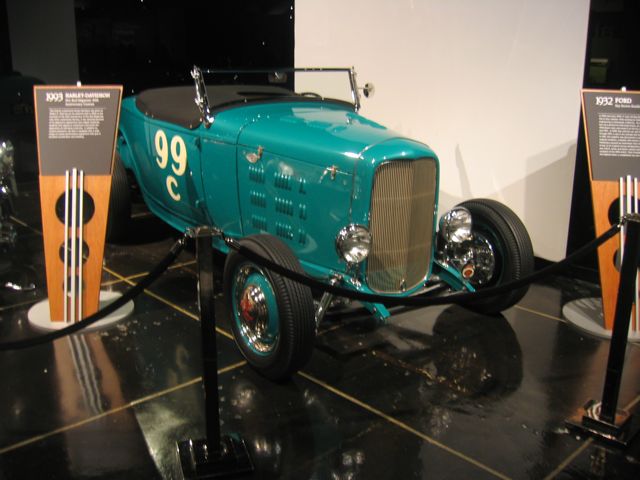 Since the Petersen is about history, Ray Brown’s roadster was right at home on the top floor. I think Kirk White used to own this one and had it restored. I would say this one is priceless. 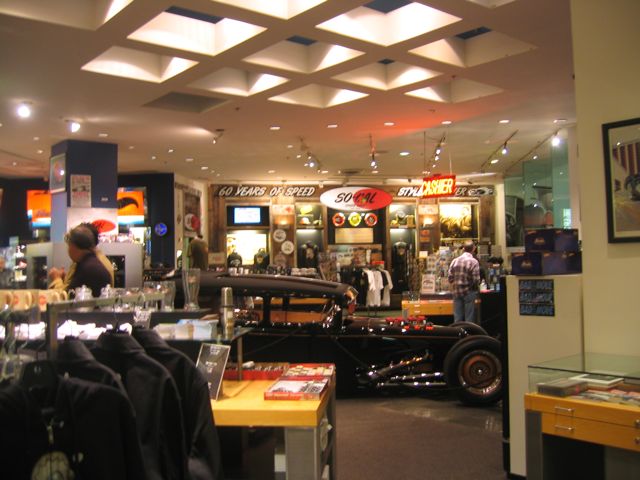 The gift shop was open and had lots of great Christmas gifts available for all to purchase. I saw lots of buying activity while in the store. There is also a Johnny Rocket’s if you wanted the hamburger, fries and a chocolate shake. 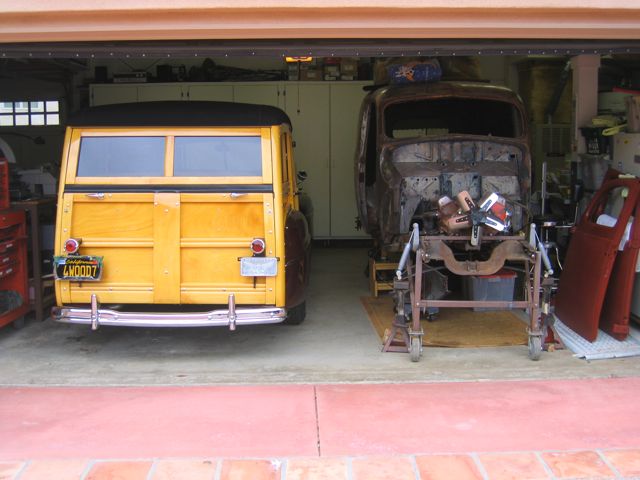 Ruby is parked next to Andre and is hoping he gets a little nicer exterior for Christmas. She is tired of his poor taste in clothing. 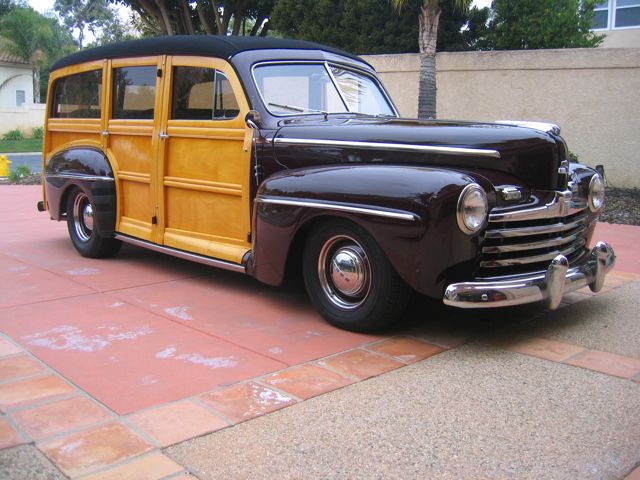 Walt had some suspension work done and Ruby now sits down in the weeds for that cool “Surfer Dude” look. No more four wheel drive look for this Woody.