Saturday morning started out very normal. I was up early, getting ready for a visit to the office when the phone rang and my friend Walt was calling to see if I was going to be home today. I asked why, he said he was picking up his Woody and was bringing the car to my house. I have an extra space now that the sedan project was gone but I still needed to move the roadster to the far side and rearrange some parts in the garage. I told him I would be ready and would see him when he arrived. Jane and I quickly moved the cars and put away some parts to make room for the Woody. He arrived and we had a great day visiting and viewing the Reagan Library. Thanks to Walt’s generosity, Jane and I will have a Woody to drive to Santa Barbara on Saturday our 45th anniversary. Sometimes your friends are truly a friend and provide you with a wonderful gift. Jane and I are very grateful to Walt and his wife for the use of the Woody.

I did not sleep on Saturday night as I got up several times to see if the Woody was O.K. I call this Woody Ruby due to its deep maroon color. I have names for all my cars but this is truly a once in a lifetime opportunity for me. I checked everything over on Sunday and we went for a long ride around the block… well it seems long to me. I have not had a driving hot rod since 2005 which is when Walt purchased this Woody. Now, my neighbors stop and want to look at the car. I am waiting for the person who wrote the homeowners to complain about this old junk car in my driveway. Some people just don’t get it.

My friend Tom is in Bonneville and is overseeing several cars that he had a hand in building or tuning. I have been watching the daily results but have not recognized any of his cars. Someday I will make this event and cross it off my bucket list. The HAMB has lots of pictures for you to see the cars and people.

I checked the tire codes on Ruby’s tires and they were manufactured in 1990 which makes them 20 years old. I will put some new ones on the car before taking off for any distance. I have many friends who have had their old tires burst from being old. The tires appear in good condition but my training and safety mind say better replace than be sorry. I will call Walt and discuss the change to his car. Frantic had two burst at 60 mph and it is not a pretty sight.

I have been working on the house today, and just sat down to write the blog at 6:00 pm so until then… 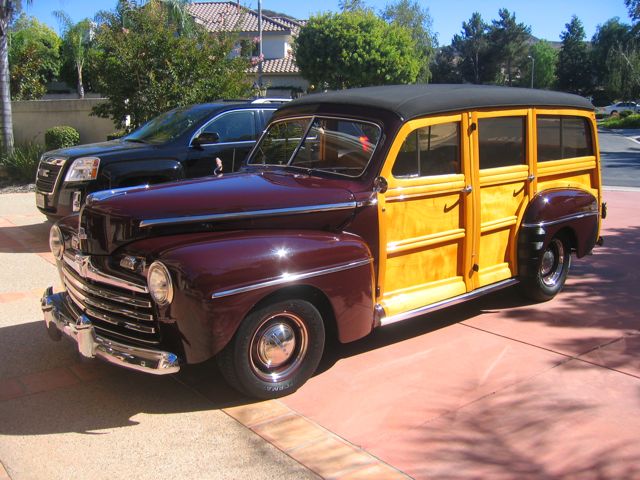 The woody showed up with a fresh varnish job. Walt keeps his woodies in great shape by having them varnished regularly. The all blond wood was a Thelan special. I like the deep maroon with the wood. Nice contrast. 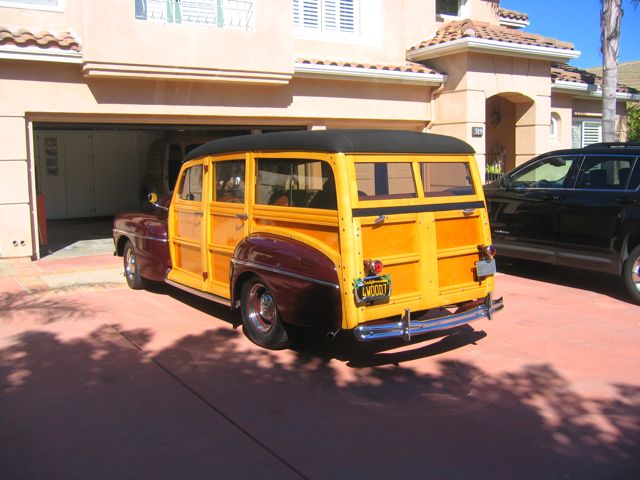 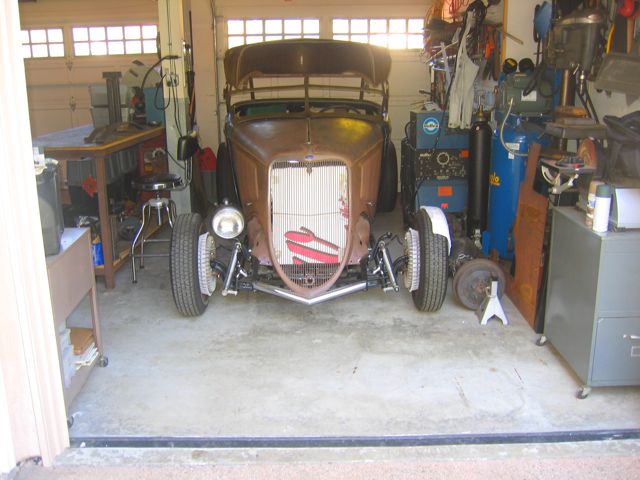 Lucy was moved to the welding space and she likes it there. I need to install the motor and transmission so I can have more space in this area. Someone must want this super project. I am a very anxious seller and will trade for a 40 project or cash. 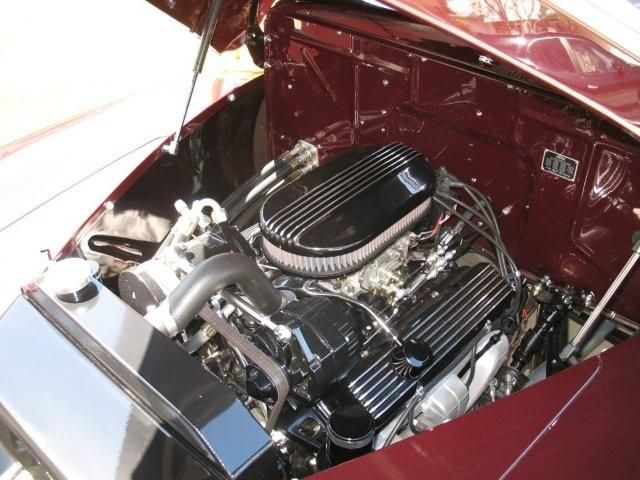 I have shown this motor compartment several times before but it is worth a second look. I love black with maroon. 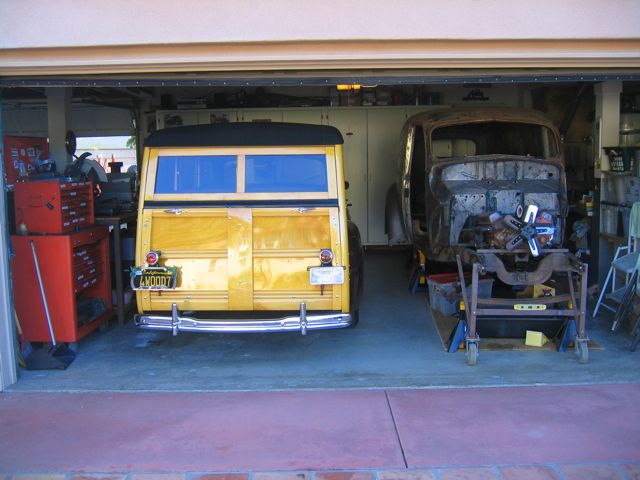 Andre has a garage mate and is quite happy to have a finished car rather than Lucy and unfinished dream. 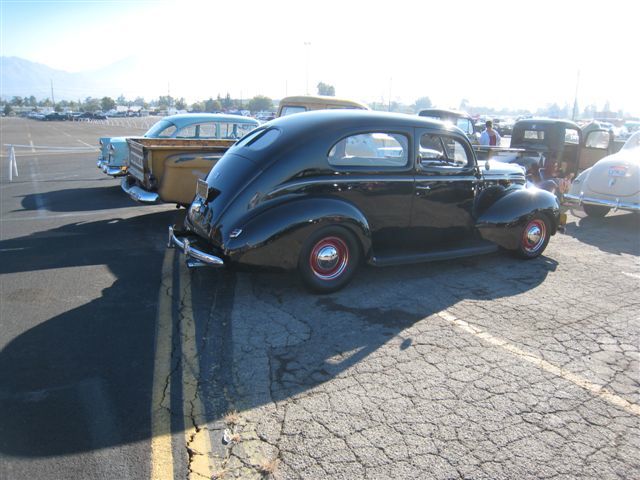 Frank sent in this 40 sedan that was at Pomona yesterday. Looks like my old one. I don’t recall the asking price but it was very reasonable for a sedan. 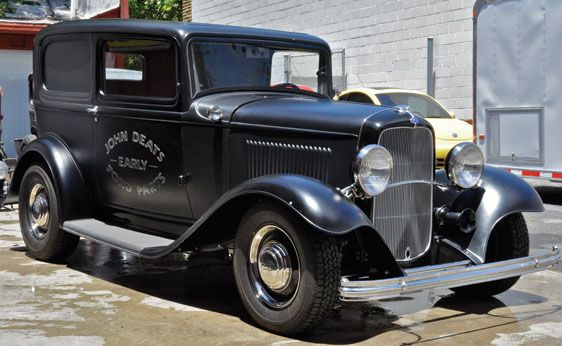 R&M’s auction in Monterey this past weekend showed the market is really down on these old cars. John’s SD sold for $44k which is less than half of what it sold for last year. I don’t know what is going on but values are headed south. 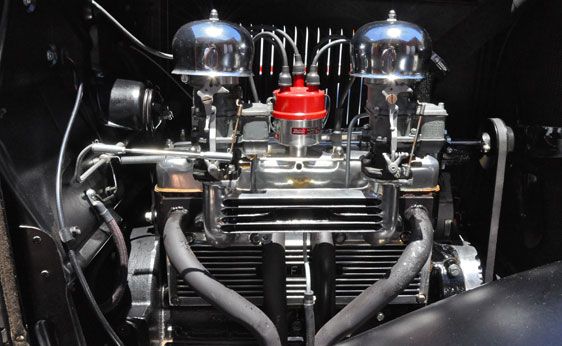 A Riley equipped banger was installed in the delivery and would make a great investment for the collector of Deuces. 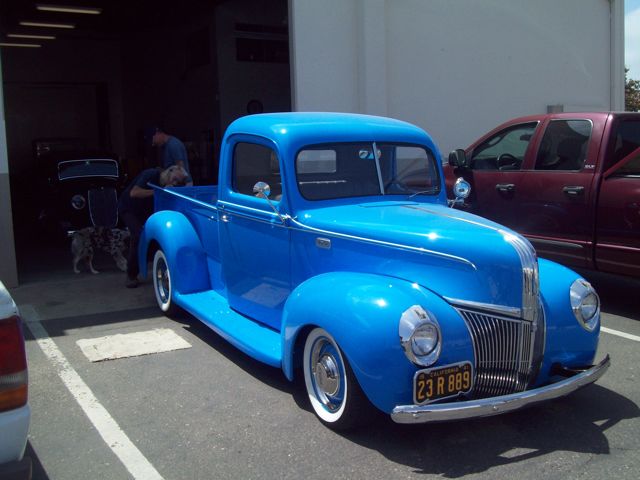 Kevin had his slick blue 41 pu in for some striping at County Line Rods. The pickup is over the top with detail and class. 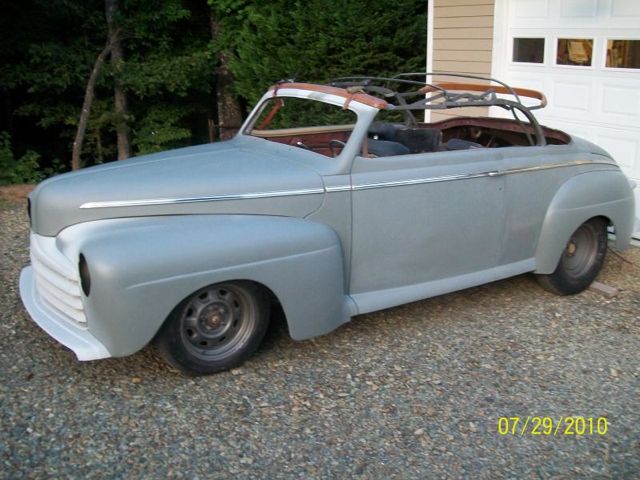 Another long time friend has a very nice 46 convertible project for sale. See the HAMB for details and specs. He has had this car for a few years and being a body man he made it very straight and ready for paint.