The 48th annual Los Angeles Roadster Show is now in the books and I can hardly wait until the 50th anniversary show comes to town. The LAR’s did a great job of handling the crowds and cars. The show is very Â spread out so you needed good walking shoes or a cart to see all of areas where roadsters were displayed. My out of town guest and I spent two days at the show and did not see everything we wanted to but saw as much as our feet would allow. We also attended several of the outside events like the Early V8 Store in San Dimas.

We spent Friday morning in San Dimas along with many other people. Bill has the parts for early Fords and attracts lots of people prior to the show opening. Bob-O and Dave drove out and Dave found some parts he needed for his projects back in Australia. Dave is the fellow we sold the 40 coupe to last year. Friday is always a great day as you meet up with long time friends from all over the world and meet some new ones. I thank all of you who came up and introduced yourself over the weekend.

I think the most inspirational roadster I saw during the show was Cory’s hiboy from Detroit. Cory, very young man, and his soon to be bride drove his freshly upholstered car from Sids to LA and got married in the NHRA Museum at 4:30 on Saturday. Cory works for GM so I was very interested talking to him at the show. He built a very traditional car with ideas that were far older than his age which suggest to me that the traditional roadster flame will still burn for many years to come. Congratulations Cory for your contributions to our wonderful hobby and I wish you all the success in the future.

I have lots of photos and will share them with you this week. 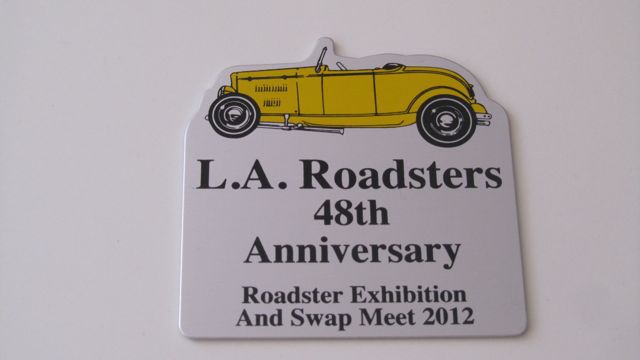 Each participant receives a dash plaque and a headlight sticker as they enter the show or swap meet area. Ruby was very thankful for her sticker and plaque. 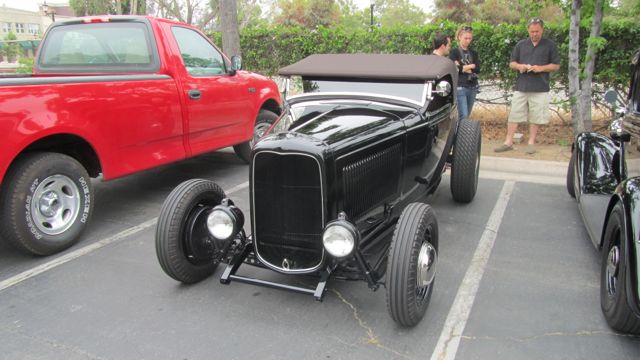 Cory was taking in the Early Ford Store along with his finance. The car has lots of clever ideas Â and was built in his home garage. You can see the entire build on the HAMB. The flathead has a great sound. 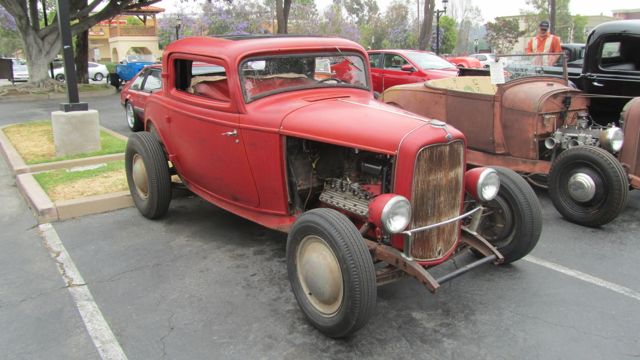 This Deuce 3 window had one of the nicest bodies and chops I have seen in a long time. I heard the asking price was $90K. It was really a great start for a traditional build and, of course, this is the LARS. 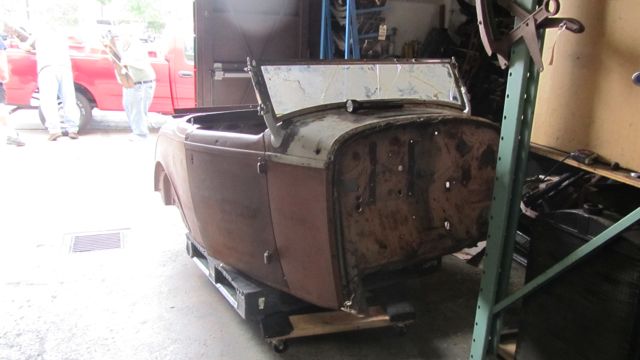 Bill had just purchased a Deuce roadster from Mike to add to his collection of early Fords. He said he really wanted a real roadster to keep. This was a very good body. Mike just purchased (30) 1932 Fords from a collector. 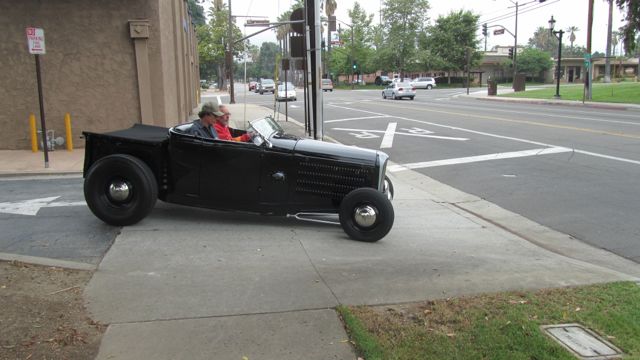 The Deuce Guy from MN drove his RPU to the EFS and then headed over the fairgrounds with the rest of the crowd. 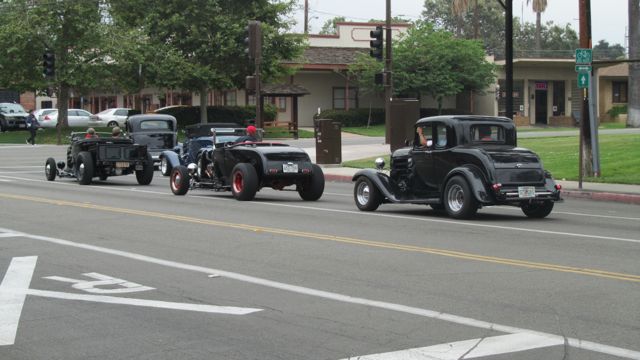 I love to see the cars on the road. The streets of Pomona and surrounding cities are full of hot rods of all kinds and the event brings lots of business to the local stores. 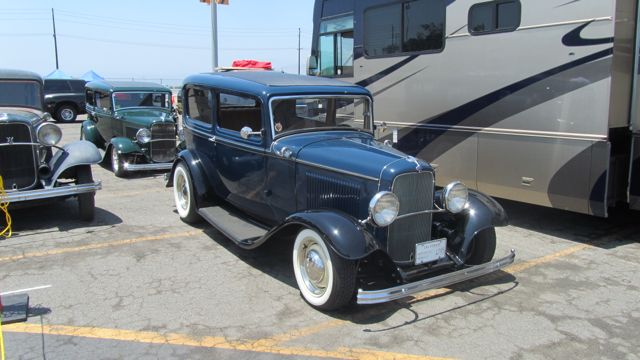 After parking Ruby near the Bauder spaces, I ran into this Deuce Tudor that was for sale. In fact, there were several Deuce tudors for sale this year. I did not see any deals but I sure liked this old timer. The price was $55K and I don’t think it sold as of Saturday night. Maybe Sunday it will be lower priced. 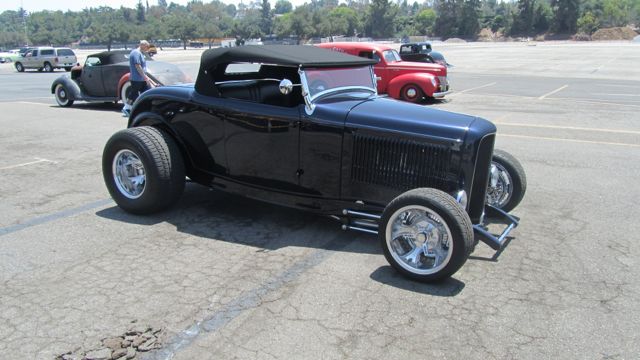 Bob has owned this one for many years. He loves the wide tires front and rear for taking the mountain curves at 80 mph. 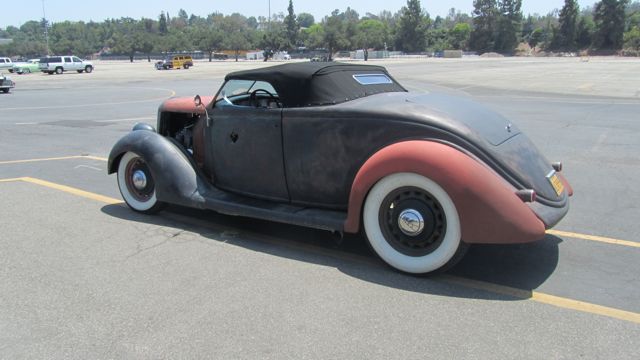 I don’t know if the trend is dying but the “Retro” look was not as prevalent as in the past few years. 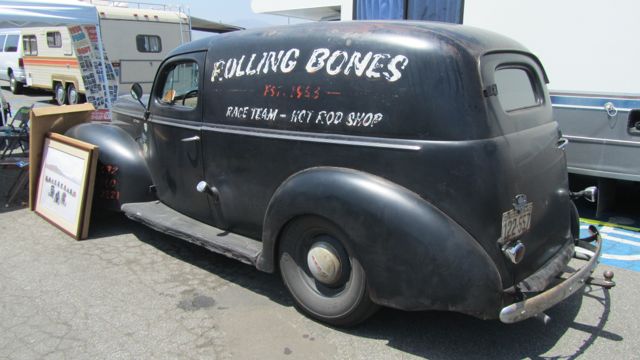 The exception was the Rolling Bones display in the swap meet area. Their old delivery was full of neat stuff. 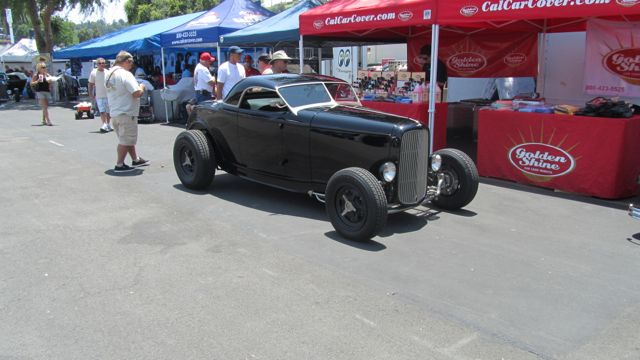 Bruce drove out in his recently acquired top 75 car. He has all of the best Deuces in his vast collection and he drives them everywhere. The “Double Nickel” car was built in the 80’s as a tribute to Doane Spencer with some later items. Bruce also owns the Doane car. 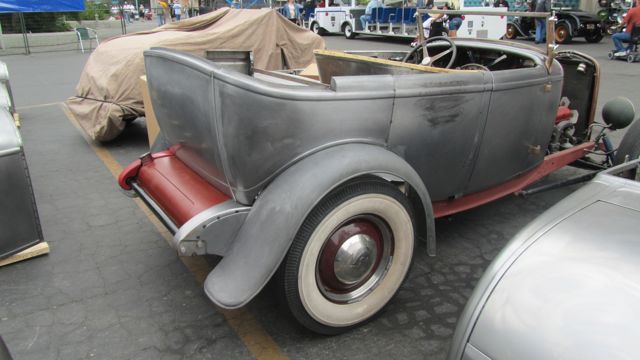 Brookville had their prototype phaeton on display to see if there was any interest. I know two guys that put their name on the list. Marketing 101, hold a focus group prior to building the product. I am sure they will bring back the 70’s popularity of the phaeton. Please set the front seat back 3 inches. They estimated the price to be about $20K. 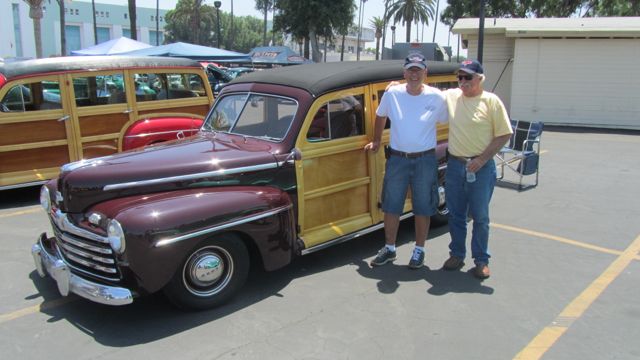 We are so tired that we needed to hold each other up while holding on to Ruby. Thanks Walt!