My high school buddy, Dave, is building a very nice Deuce tudor with an original chassis powered by a flathead. He is keeping everything like he found it except for the previous Chevrolet engine. Straying from his original build plan is tempting but finding the correct parts is more fun and he already has several other hot rods with the “Street Rod” stuff installed. He and I often reminisce about the past and how we only would use (read that cheap) junkyard parts for a build. I am proud of him for sticking to his plan rather than 1-800-send it to me. He is now installing the stock front Deuce motor mounts utilizing his modified front crossmember. Finding original ones is not only difficult but expensive. You just keep looking and normally you will find what you are looking for and at a fair price. Time is not important but making a plan and working the plan is the objective.

We all know Deuce parts are “GOLD” in the sellers eyes so often the search must be done in the not so obvious places such as Fordbarn. “Offices” (donut shops) are full of lots of leads on who might have what you are looking for. The Early Ford Store will most certainly have what you need and if you need it today that is the place to go. You will pay the market rate but you can have it now and Bill knows good parts. For example, my friend purchased some represented “solid” fenders that turned out to be of poor quality when received. One quick call to The Early Ford Store and he had what he wanted. The fenders were exactly as represented. Granted, you paid the going rate or higher but that is what needing it now, does for people who can’t wait. You will probably spend as much looking for the part as if you just went ahead, stepped up and made the purchase. Remember, the smile on you face for a good deal soon turns to a frown as the parts turn out to be poor quality. I tell my wife I didn’t pay too much I just purchased the parts too soon. Works every time.

I will be heading over to Frantic’s to have him solve my rear shock problem this week. I can’t find my old shock brackets from Andre so I hope he has some in inventory. TCI no longer deals in these old Ford parts but Fred usually has lots of inventory on hand. I will also need some new bottom plates and shocks. Old cars require lots of love to keep them going and I am deeply in love with mine. 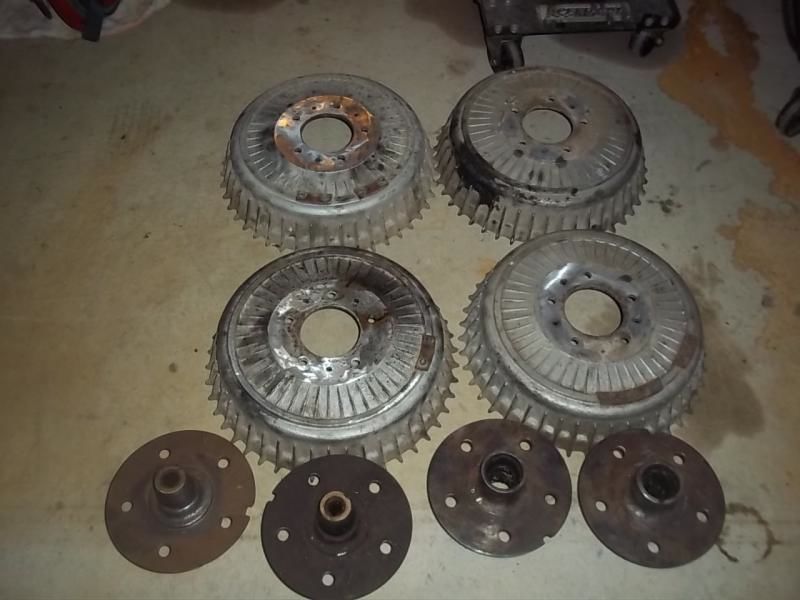 I know you can purchase new “Fake” drums from SO-CAL but I still prefer the original stuff. I have the hubs but I am still looking for some drums for Mr. Bill. These sold fast. 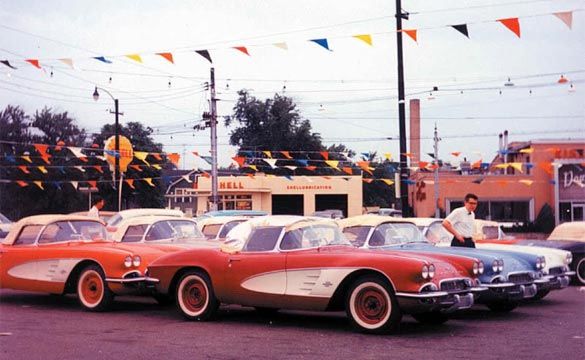 Lew likes Corvette also and sent along a photo of the “Good Old Days”. These look new and mostly convertible tops only. 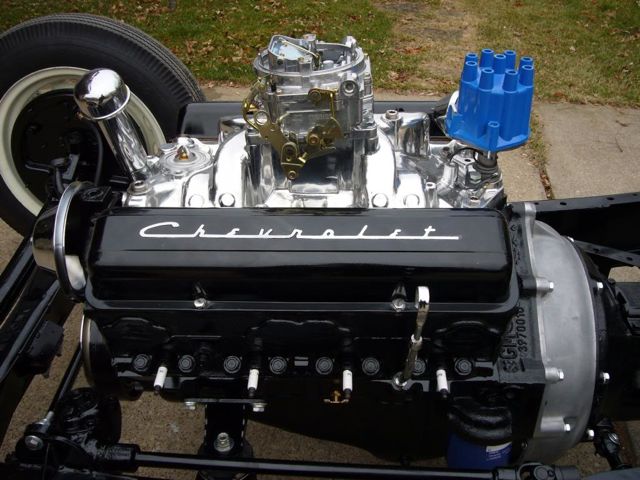 The photo is about the 39 box installation in a Deuce chassis. Yes, it can be done but is very tight. If we paint the distributor cap black we would be ready to go. I have several sets of these valve covers but they are orange. The black and silver looks good also. 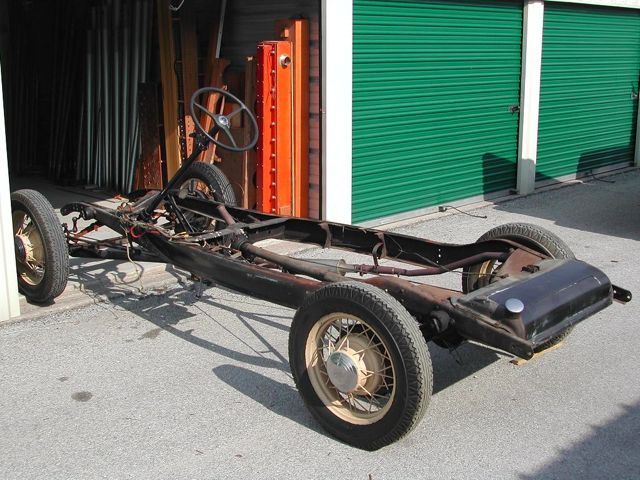 If you must have all the original chassis parts on your new hot rod then this one may be for you. $10,000 big ones but it is the real deal. In the 50’s-70’s we would have cut this all up. Not today! 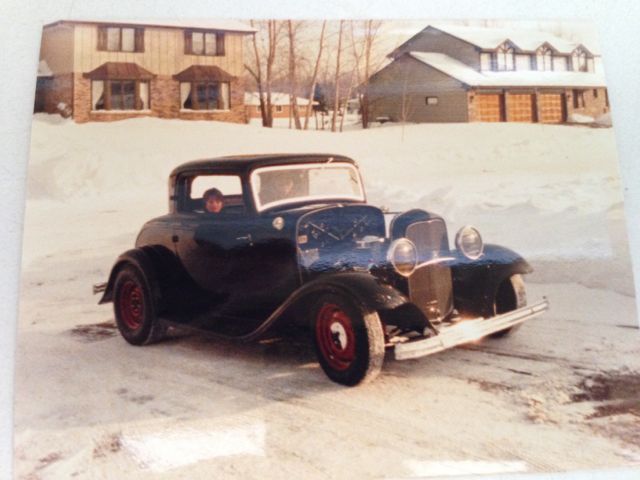 This photo is of my son and I going for a ride in March of 1984. Snow was present and we still went for a drive on the icy MN highways. Walt now owns this coupe. One of the best I ever ownedâ€¦.no rust or dents ever. 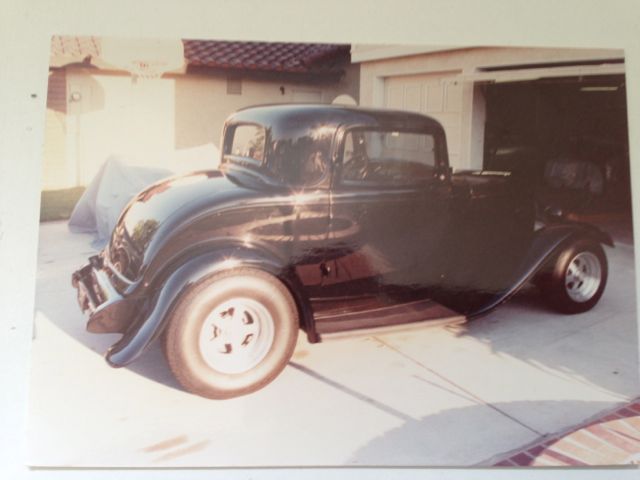 When we arrived in LA, I fell in love with Nick Matranga’s three window and thought I was buying it from Boyd. It turned out Boyd didn’t own it. Walt owned it. Small world isn’t it? 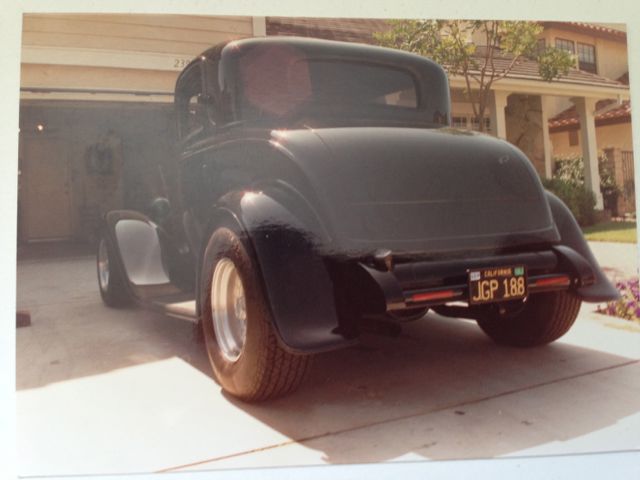 The car was very nice and on the cover of Street Rodder along with Don Smith’s Deuce Woody which Walt also owned. The car had a 64 Fi unit that was nothing but problems. A nice Edelbrock 4 barrel solved the problem. Roy Brizio did the swap. I even had Roy look at the car when he was at Boyd’s shop in Stanton and he liked it. 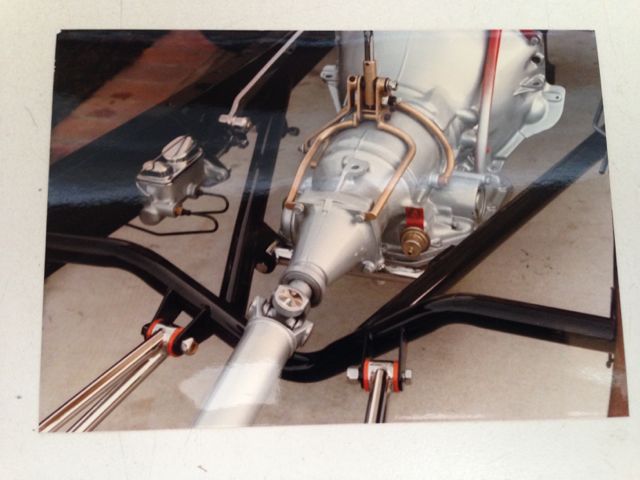 I still had the chassis from my old three window as Boyd didn’t want it. I put a chopped tudor on this and the new owner is still driving it. The Eastwood/Bills R&C style K-member works well and has proven itself to be reliable and sturdy. 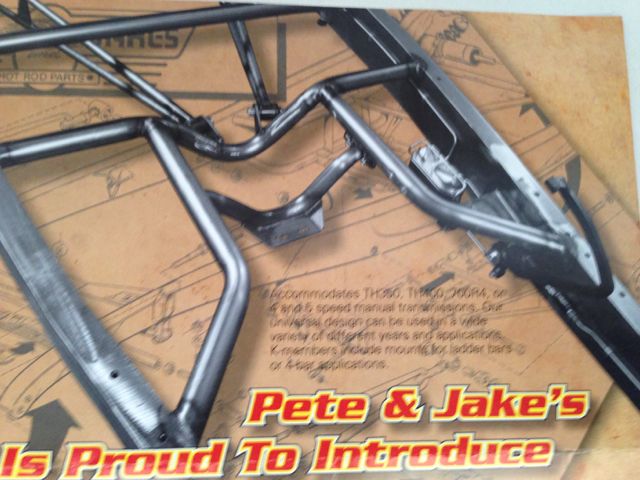 Mr. Bill couldn’t find a Deuce Frame center section so he ordered a P&J model which arrived in three days. They provide great parts and good service. Similar to mine but a little different. Same concept and should provide adequate room for exhaust and accessories. 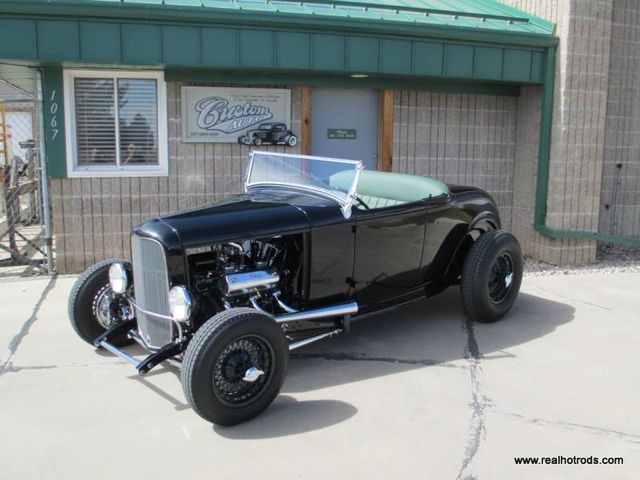 Custom Auto has finished the Ray Basso roadster and the owner should be very pleased with the finished product. 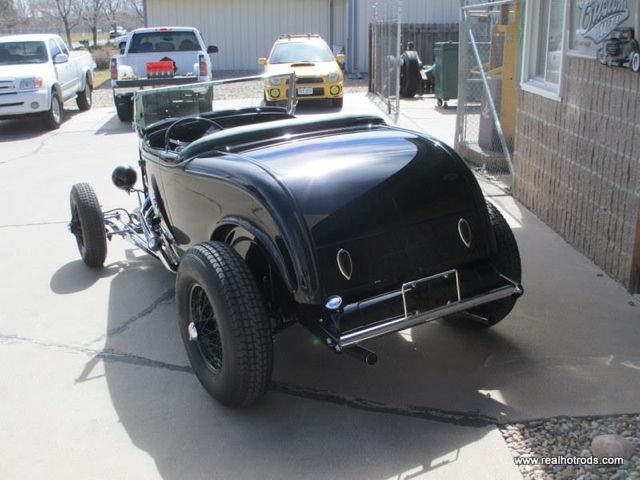 I am hoping it will be at the LARS this June. Simple Elegance would be a good name for the car. Nice job Rex and the staff at Custom Auto in CO. 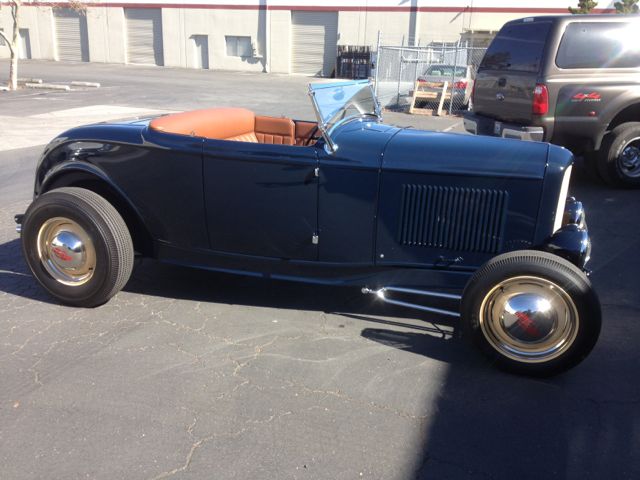 Brookville body on SO-CAL chassis with Sid’s interior and Bop Top make this hiboy a sure winner. 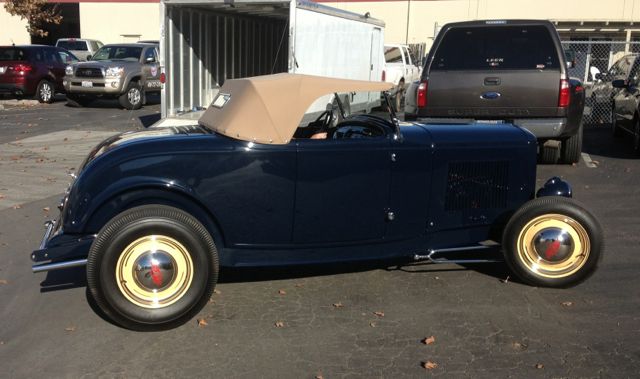 Looks equally as nice with the tan top and Tacoma Cream steelies. 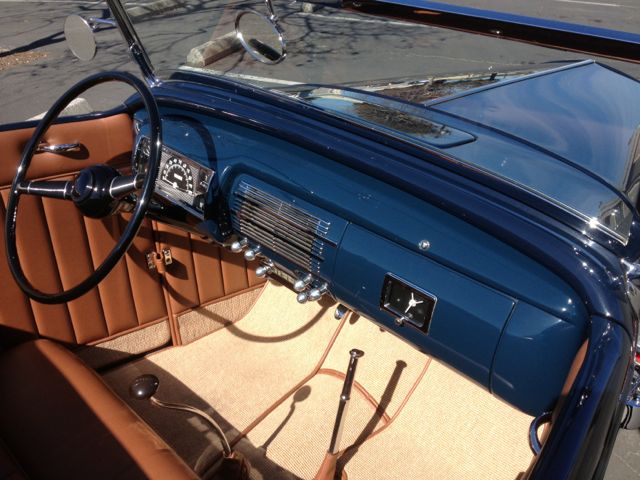 If you love Deuces and 40’s then you will love the dash in the Washington Blue roadster. 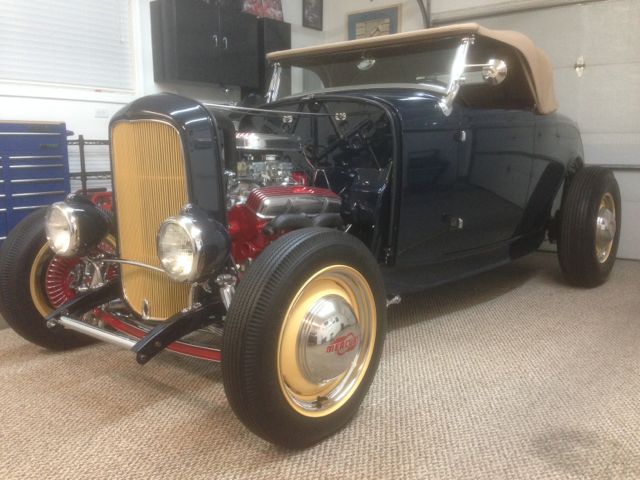 Today’s Project Pick of the Day! 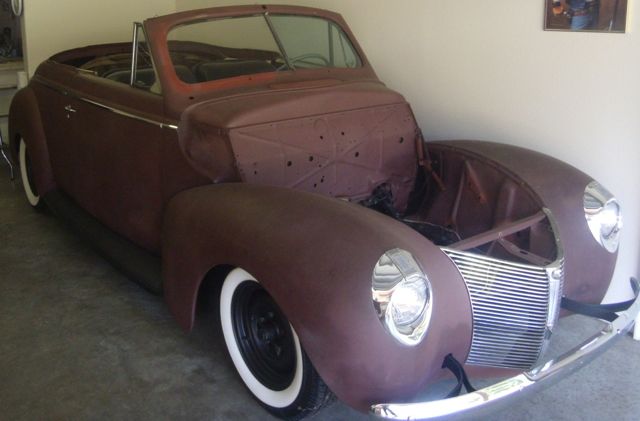 How about something a little different this year? Mercury convertibles are rare and make real stunning rides when completed. 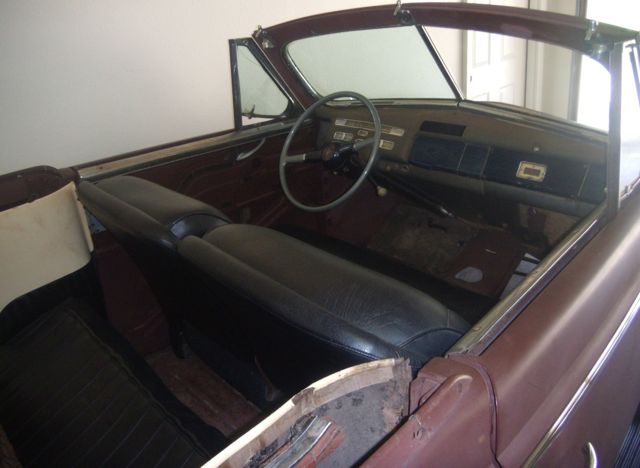 The car looks to be complete and ready for someone to finish to their taste. I have no money and no room at the INN. 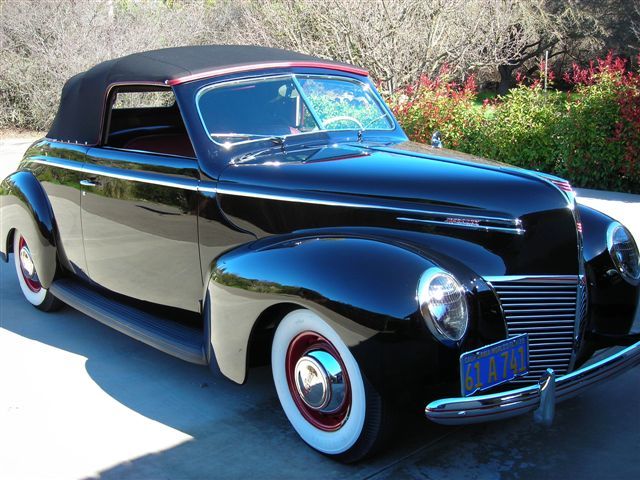 Here is Nick’s beauty. If you have an interest in a project let me know.