The 52nd Los Angeles Roadster show is in the books and will be remembered as another great show with lots of roadsters and hot weather. I arrived early on Saturday only to fine long lines to get into the Preferred Parking area. I advanced until the temperature gauge read 200 and then pulled into a parking spot and waited for the line to become less time consuming. That time didn’t seem to happen, so I went into the swap meet and continued my journey. The swap meet was first, but being as big as it is, I soon decided I had seen enough and headed for the main exhibit in building 4. I spent about an hour getting there as there were so many cars to stop and see that time passed quickly. I also was meeting up with some friends I hadn’t seen in many, many years who were in town for the show. I was still worrying about Pepe as the oil pressure gauge seemed to drop dramatically while the engine temperature rose. I decided I would go back and check it out around noon but I soon forgot about my diliema and became fully immersed in the Los Angeles Roadster show.

The roadsters are spread out all over the place but many were in the shade, which is where I continued my journey. I saw several new versions of the Deuce roadster but this year a whole line of 1936 Ford roadsters were sitting in front of the buildings. I have never been a fan of the breed until recently and there were some really nice ones on display. I wondered around for another couple of hours and finally landed in front of Dick Carroll’s beautiful 34 roadster which he drove out from MO. I had not seen Dick since the first NSRA meet in Peoria which was in 1970. We talked about old times, looked over his roadster and I then headed for Pepe. I didn’t make it very far before I started to feel dizzy. Luckily, I ran into Steve Lemmons and he offered me a chair. I immediately started to feel better and continued to talk to him and his friends. Thanks Steve. After a short time, I saw the tram and climbed aboard for the long trip to the other end of the fairgrounds. I could see Pepe parked outside the fence and soon was sitting in the front seat drinking much needed water. I had talked to several people about the oil pressure and before starting the car. I checked the oil and water and underneath to see if there was a major leak somewhere. Nothing visible to me, so I pushed the button, the Ingelese EFI fired immediately and the oil pressure was 40 pounds. All was good , so I headed back home while the traffic was still somewhat drivable. The traffic turned out to be really heavy but the temperature never went over 180 and the oil pressure stayed about 20 which is normal for this engine. I was very happy to be home with Pepe safe and sound in the garage. I had a wonderful two day’s at the show and despite the problematic trip and long lines I couldn’t have asked for a better Father’s Day present. My thanks to all the LA Roadster members who made this happen. See you next year!

I hope yours was as good. And I enjoyed meeting and talking to all of you I had the opportunity to do so.

If you were looking for this style roadster, as I was, then you would have seen literally a hundred or so of this style. 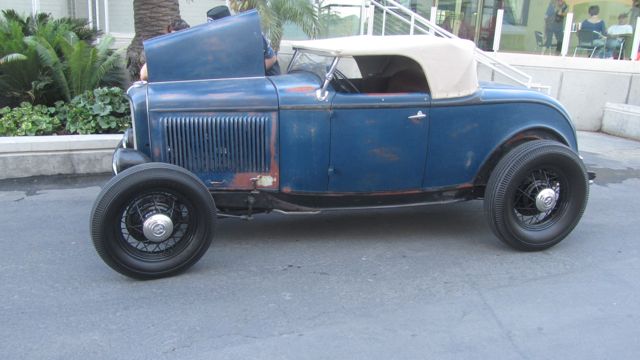 This one caught my eye on my way into the main exhibit. 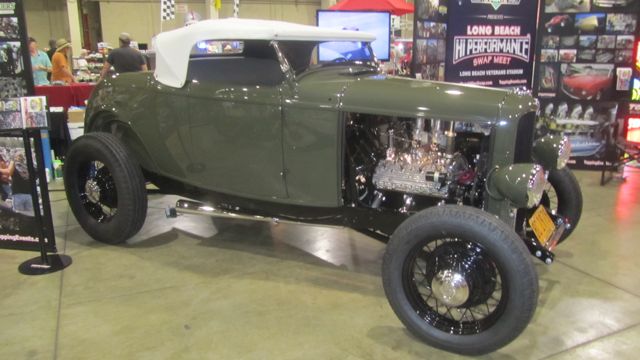 Toppings (Long Beach Swap Meet) had their freshly finished roadster in their display. 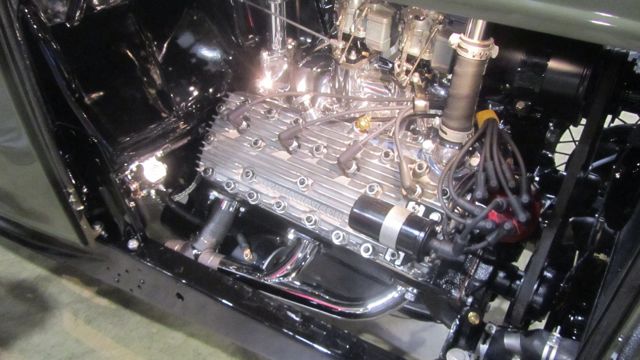 Lots of flathead engines like this one in the Toppings roadster. 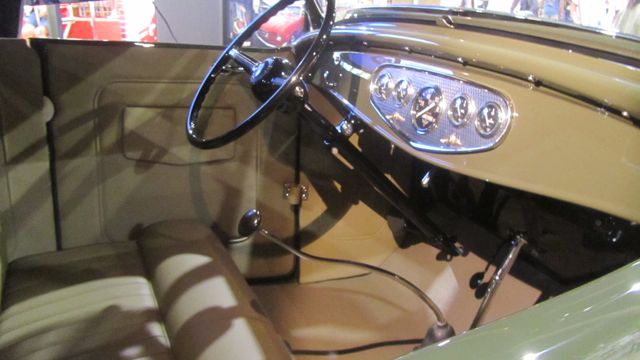 The interior was very nicely done in a beige color. 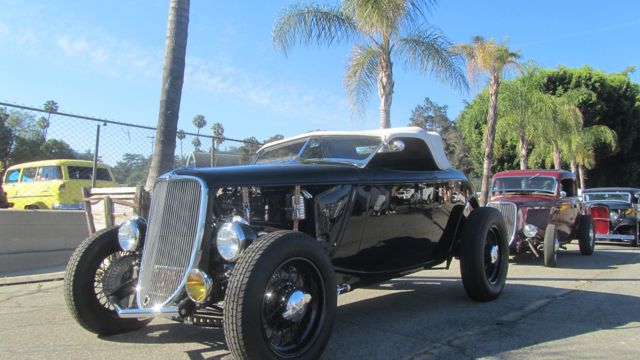 I ran into “Lucy” in the swap meet area. Ray keeps her spotless. 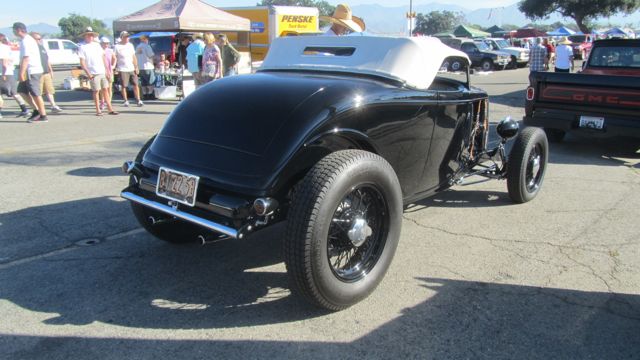 I have fond memories of building this car and thank John Mumford and Roy for the inspiration so many years ago. 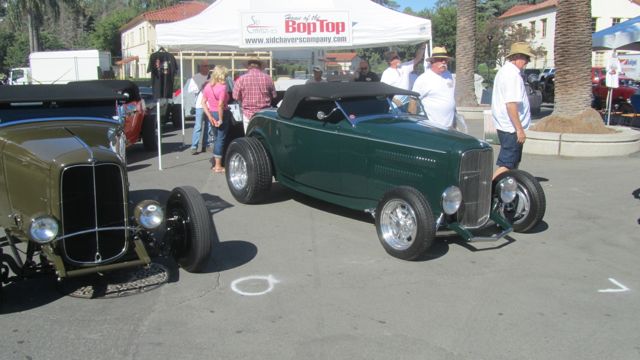 Two of my favorite displays each year and always full of roadsters are Syd’s and Roy’s. Syd had his roadster looking good now that he has it back home. Darryl also drove his AMBR down from the Bay Area. 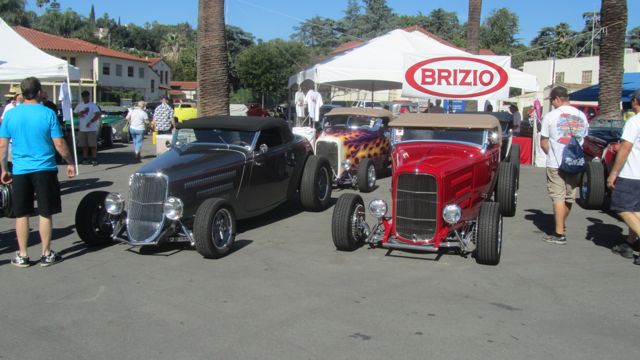 Roy had some really nice roadsters on display. The Speed 33 was new to me. 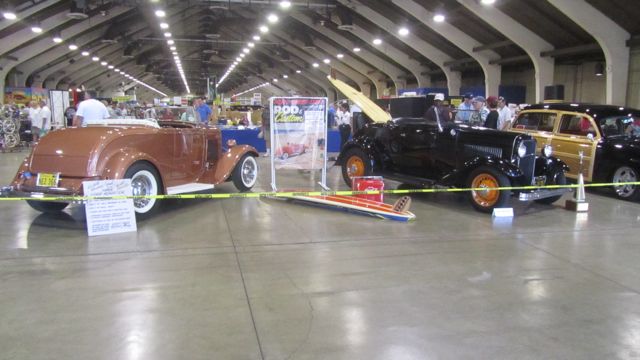 The entrance display in building 4 was beautiful to me. The twin roadsters on the cover of R&C were always two of my favorite. These are the original roadsters. 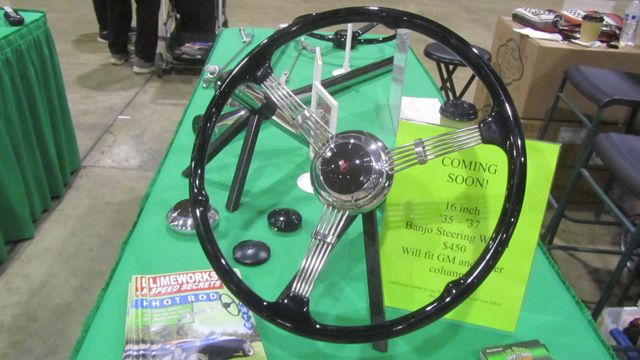 The Limeworks had a new 35-7 Banjo wheel on display that fits a GM column. 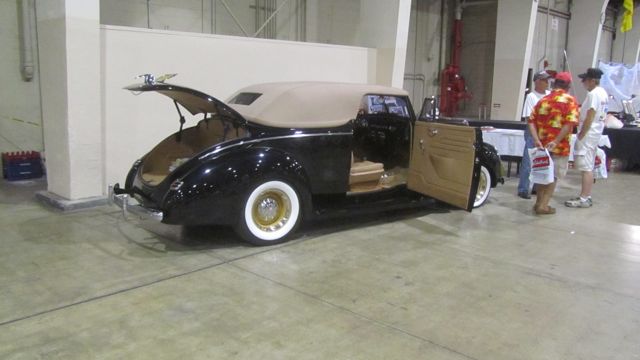 Dick and his wife had an indoor booth and his 40 convertible is now on the block. 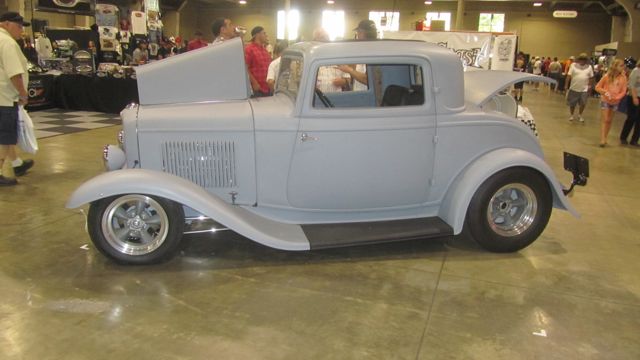 Roy Jr. had another 3 window in his booth. He builds nice cars at his West Coast Customs shop. 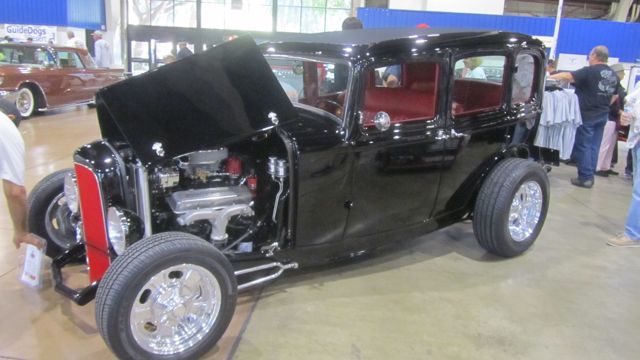 Randy had his mor-door on display in his booth. HR&CS build some amazing Hot Rods. 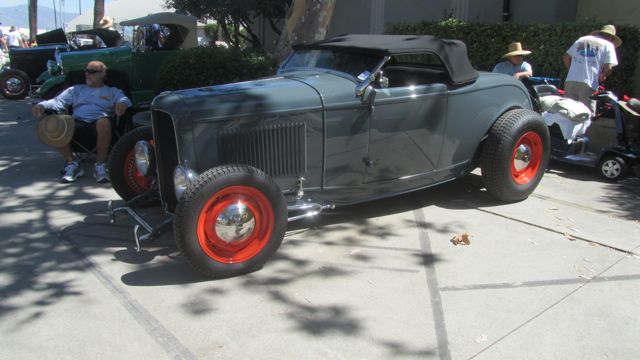 Still one of my favorites is this beauty with the laid back windshield and orange wheels. 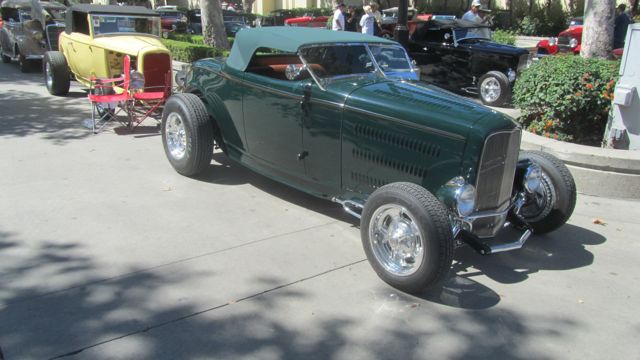 I like the Duvall windshield on roadsters like this one. It was for sale but I didn’t see the price. 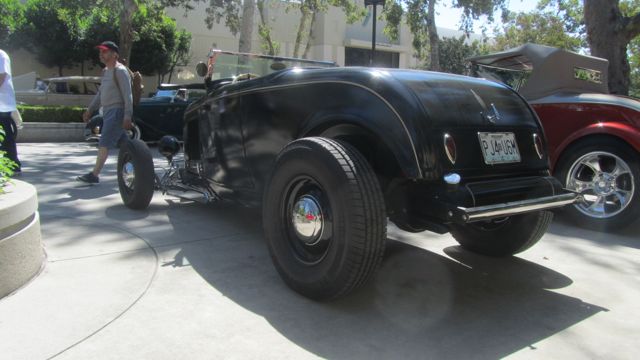 Another old friend from the 70’s, Dick Bales from Mo, drove out for the show. He is a new man these days. Congrats to you Dick! 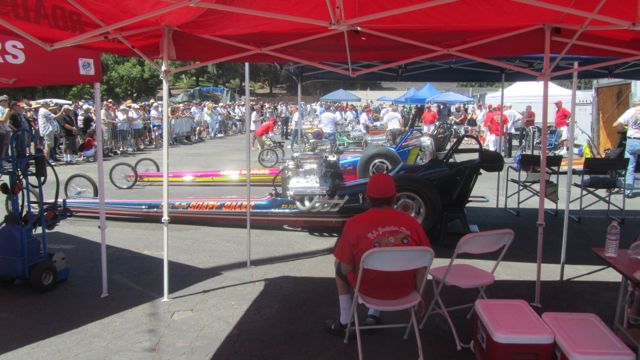 I always enjoy watching the “Cackle Fest” and so do a lot of other racers. Your eyes will burn and water from the Nitro. 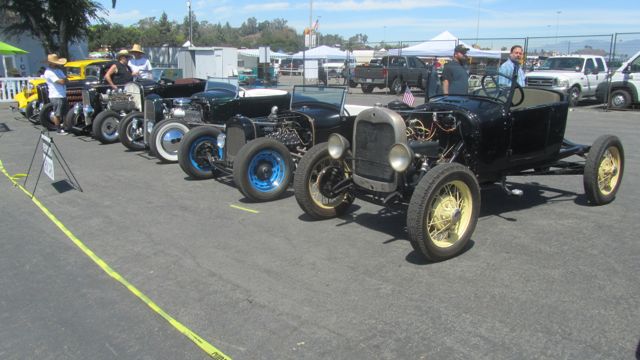 HOP UP had a display of some of their cars in one section of the parking lot. 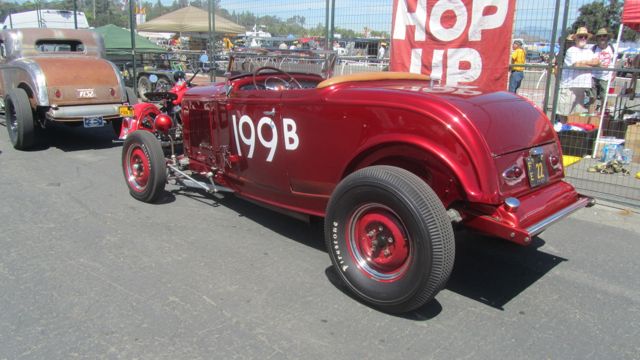 Brian Bass had his famous roadster which showed signs of being used daily. 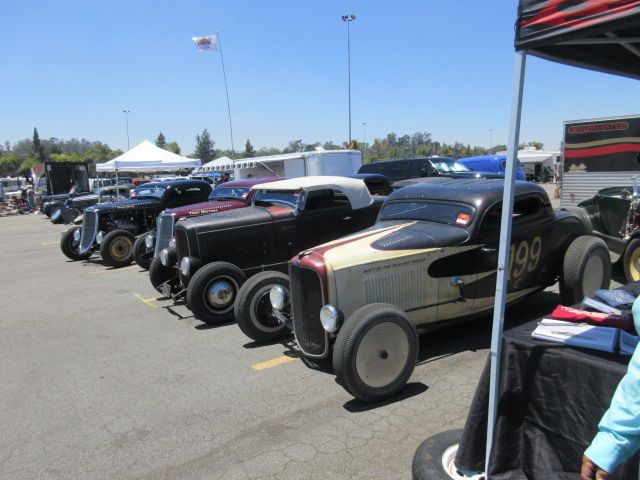 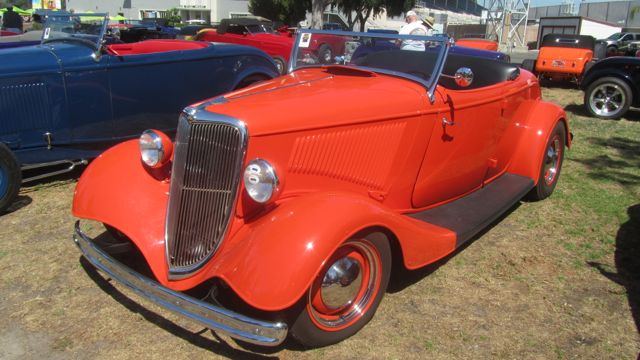 I finally meet up with Dick at his roadster which he drove from MO also. Former hiboy, now with fenders, he is still going strong. I enjoyed talking to you Dick. 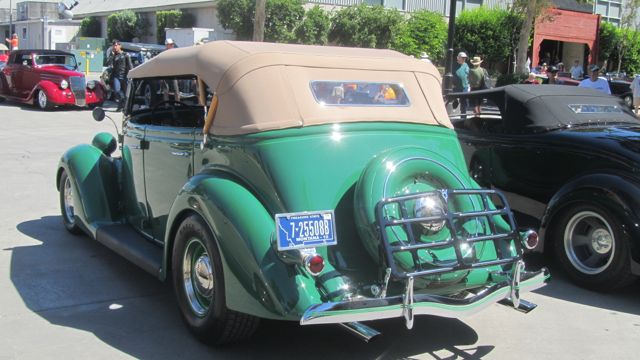 Tom labored over this one for a while but it turned out fantastic. 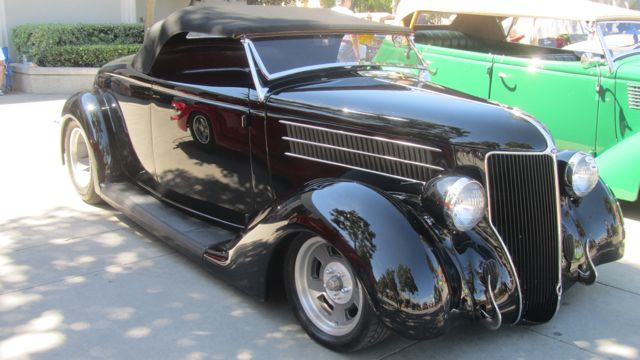 I liked this 36 that was on the ground with Halibrands. 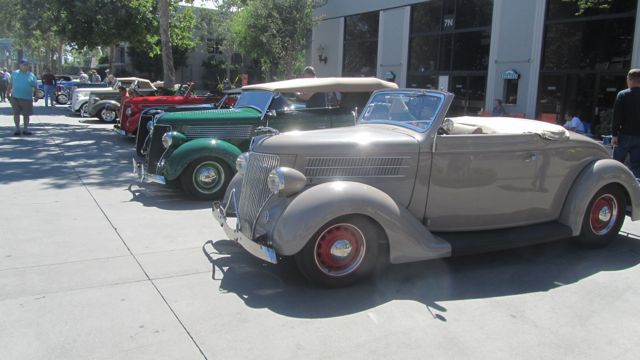 The 36’s were lined up on both sides of the shady section between the buildings. 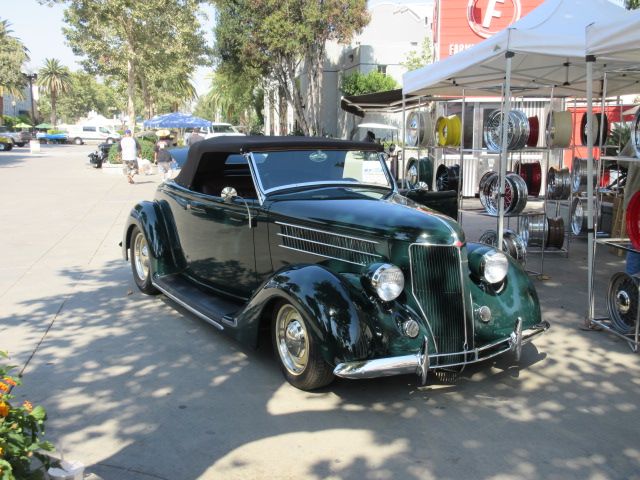 The Wheelsmith 36 roadster was a big hit this year. LZ font bumper is a nice touch. 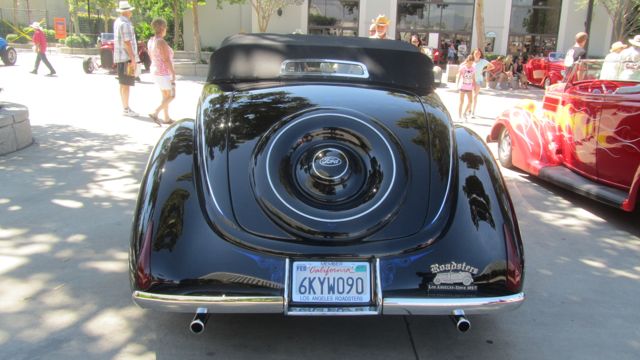 The latest from Doyle Gammell is this creation. Lots of metal work involved in the build. 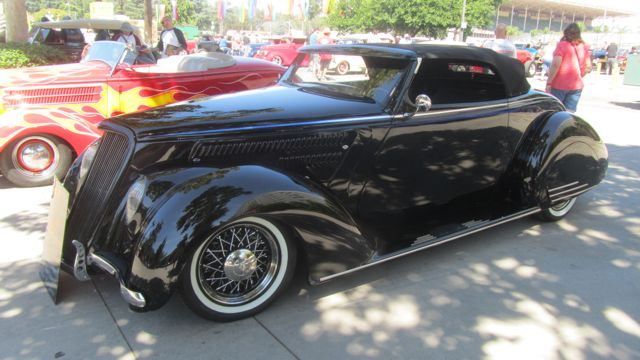 I looked it over for a long time and major work has been done to arrive at this custom 35 cabriolet. 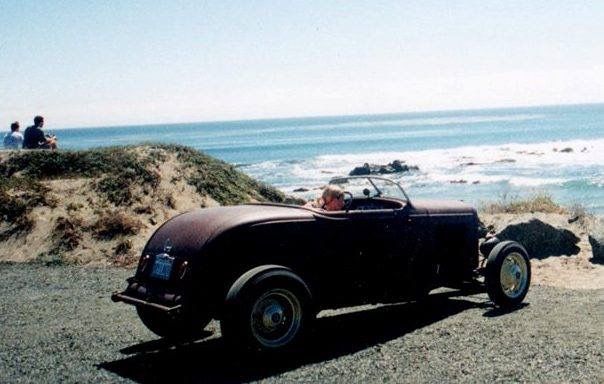 After a day at the LARS, sometimes just a stop along our beautiful Pacific coast will complete your fantasy. 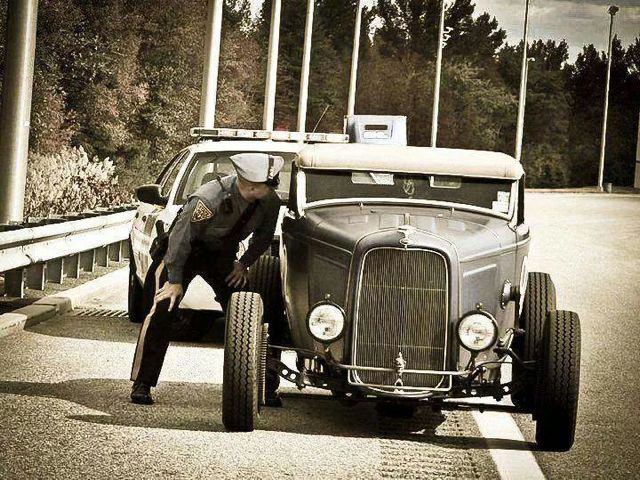 Have a safe trip home â€” he just stopped you to look at your roadster!!