I opened one eye and peered at the alarm clock which read 3:00 am. This meant it was time to get up and get going to Encinitas for the 34th annual Wavecrest Woody Show. We needed to meet Walt and the crew at Denney’s at 5:30 am. Now, this is early for this old man but I have been going to this show for so many years that I make the effort. Jane and I were sitting in Denney’s at 4:30 am having our morning cup of Joe. There is not much going on at that hour so the trip was much quicker than normal. Walt arrived on time and we were off to Encinitas. Driving down I-405 in the early hours seemed easy but I kept noticing the blinking signs that stated it was closed ahead. We had experienced construction projects all the way but didn’t expect a closure. The detour came quickly and we all got separated and followed the line for the next hour over to the ocean and back on the freeway. Frustrating but not enough to deter us. Walt arrived first (fast driver, ya know) and saved places the others. We were able to park real close and that made us happy.

The show was well underway with woodies everywhere. I headed out to look at the cars and was soon standing in line to get my annual Wavecrest T-shirt and mug. My wife loves the mug and we have them for many years back. She also has the Wavecrest cloth material to make pillows. She is quite the seamstress. While looking at the cars, I noticed a Hercules 34 Woody in the unfinished state just ahead. I stopped and looked the car over and was really surprised to see Cecil (builder) standing by the car. I walked up and introduced myself as I had met him in the early 70’s while working in Florida. He builds both the 33/34 and 37 reproduction woodies and they are really well built. What I like about the cars is; everything is brand new, all the wood has been fitted and is ready for varnish. He builds hot rod woodies and several finished examples were at the show. I enjoyed walking the show for the rest of day. Meeting and talking to the owners has always been one of my favorite pastimes. Most owners have quite a story about their woody. Many have picture albums showing what they started with that really shows how much work is required to bring one these wooden cars back to life. I fell in love with a 47 Chrysler Town and Country which the owner told me it took him and his wife 6 years of hard labor and lots of dollars to bring it back to life. I could tell by his tone of voiceand the smile on his face that he felt it was worth effort. Isn’t that what it’s all about?

We finally left for our long drive home along the beautiful pacific coast dreaming of hanging ten on the longboard that was given away. Remember, there are no bad days while on the beach. 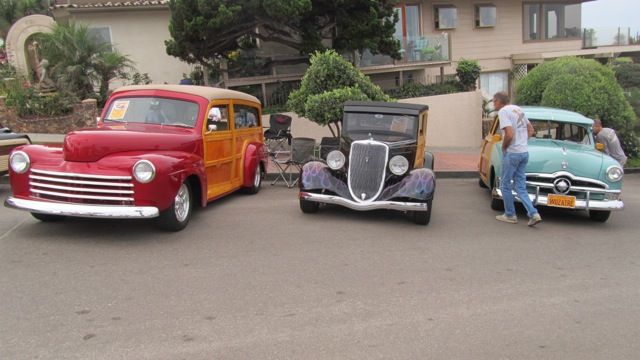 Our trio arrived and parked on the hill leading to the beach. You needed a rope attached to the tree to hold you in place. Walt’s 48, Jim’s 34 and Dave’s 50 were looking good and had lots of admirers during the day. This was another good day at the beach for the group. Dana Point is next then Malibu for Christmas. 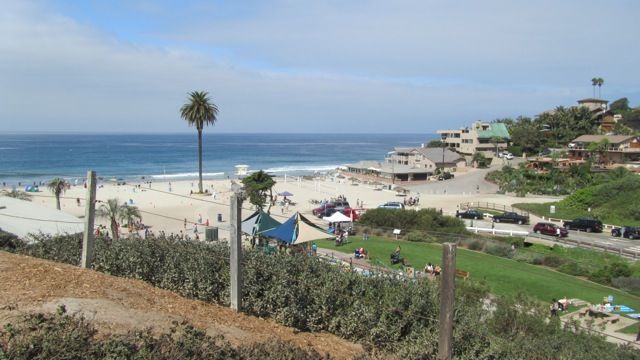 The beach has been remodeled since last year and was void of woodies. Nice but sad. 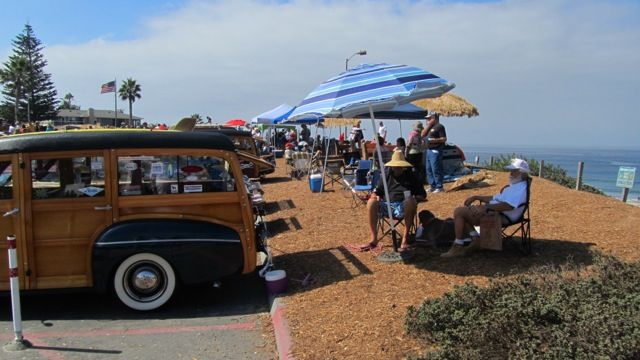 The best parking spots were long gone by Saturday morning. These folks had the best seats in the house on a perfect weather day at the beach. 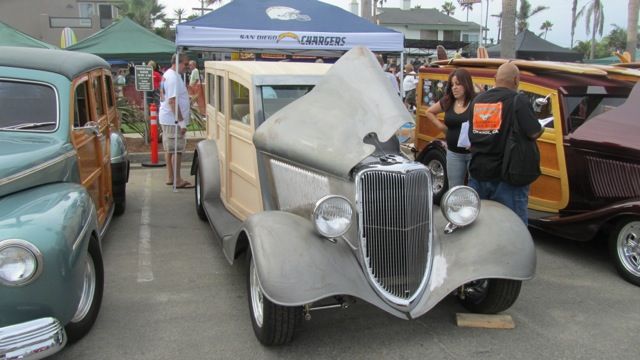 Hercules Mfg. had this very nice reproduction 34 woody on display they had built for a CA customer. A first class hot rod woody….cost is about $70K without drivetrain. I am guessing about another $50K to finish the car. The one on the right was finished for all to see. 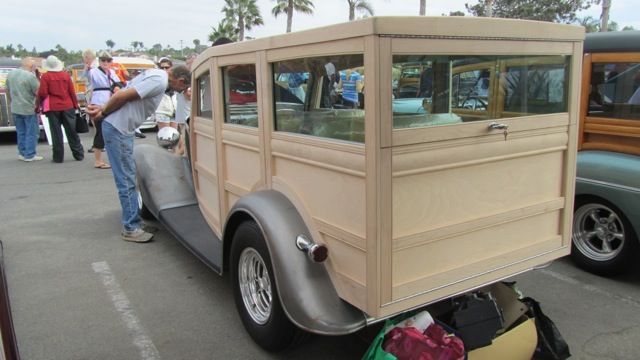 The rear view was also very appealing with excellent fit and finish on the wood and metal. Rich was hanging around here all morning inquiring about a 37….could there be a woody in his future? 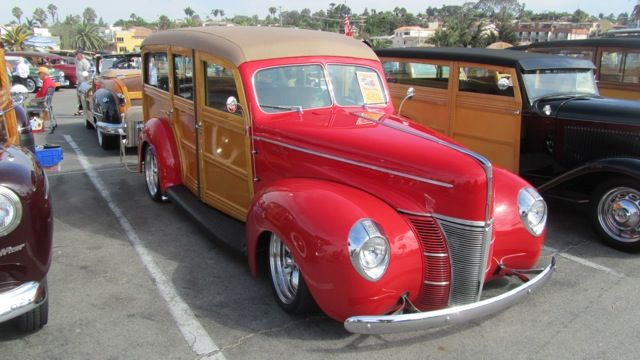 I did not see a lot of hot rod 40 woodies but this one sure had the lowered stance with tan leather and 5 spokes. Note how far the bumper extends in front of the grille. Hint…use standard irons. 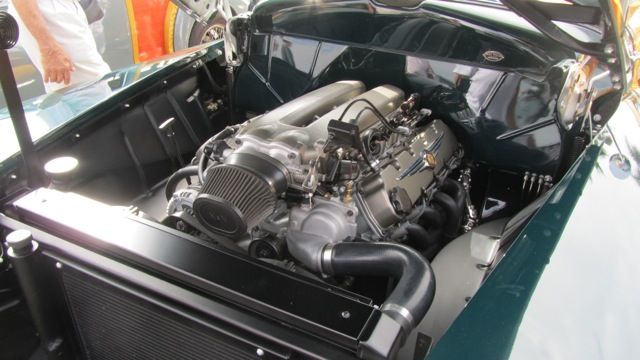 I gave Gary the best engine award with his Viper motor in the 47 T&C woody convertible. What a magnificent automobile he built.

Yes, the LS series engines are showing up more and more in hot rods. You can even woodgrain the covers to add to the Woody theme. 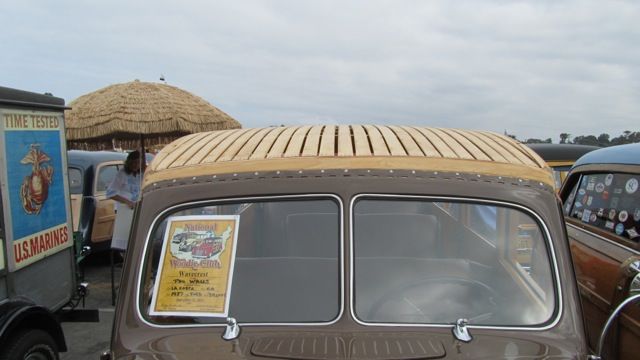 I talked to this fellow at length about his replacement of the top slats in his 37 mint woody. He removed the entire top to do this which is not necessary but makes it easier to install the slats. He sorta liked the ride to Wavecrest with the top being open and the weather perfect. 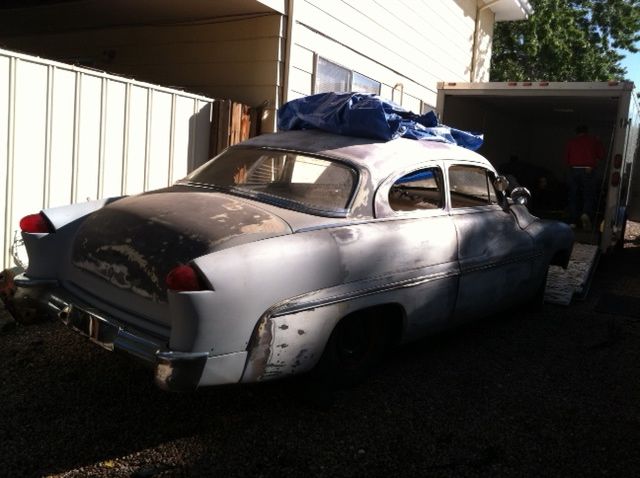 The “Man” in our town in the 50’s was Buddy Beal. He had all the cool cars and good looking girls in his stable. His old Mercury has been found and is being put back together. If only cars could talk. 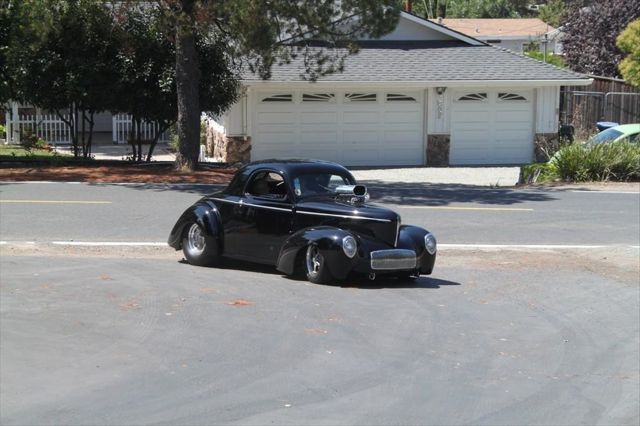 Duane, who has the cool Deuce 3 window I featured a few posts ago, also has this bad boy for those hard core days on the street. I do love the Willys also but I don’t see many at the events I attend. 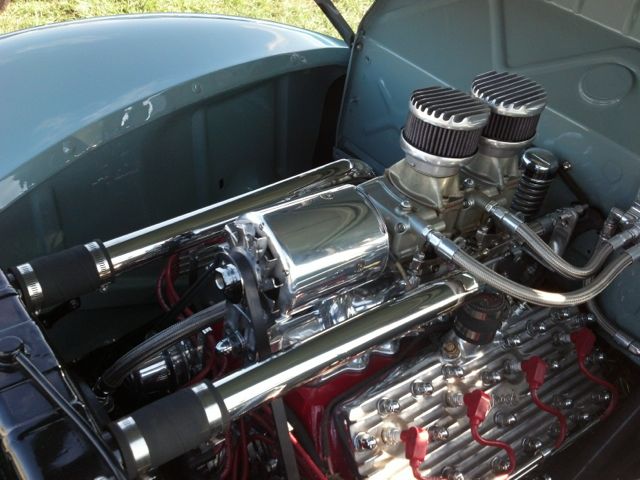 I agree with Bob-O it is hard to beat a dressed flathead in a hot rod. This one is an eye catcher. 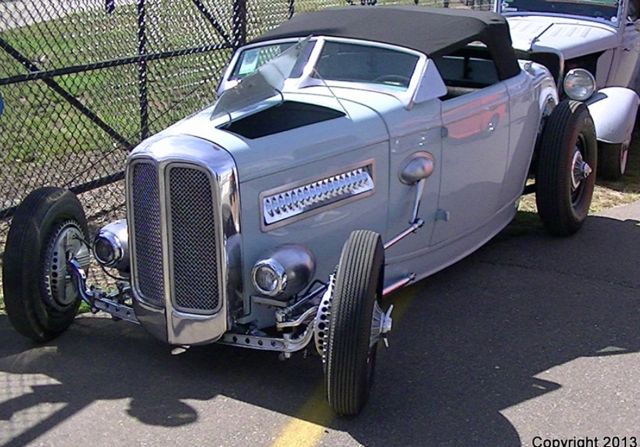 Here is another Deuce from Crafty-B that had everyone talking this past week in Indy. 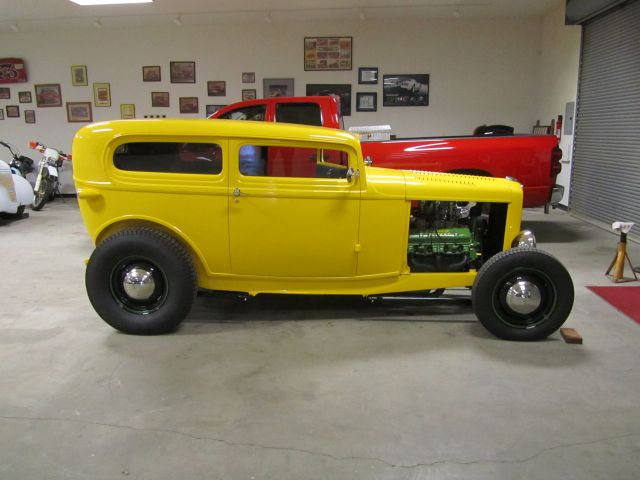 We missed this one by a day but Bobby sent along some photos of his hiboy sedan with lots of history. An Oldsmobile engine painted green is used for power. Very nice ride Bobby. I’ll be back. 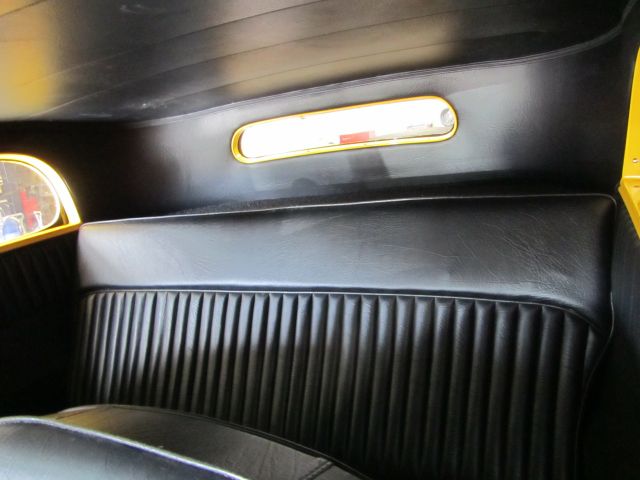 I think Bobby will require side mirrors to view his rear road sights. Note the size of the window. You don’t need the stock shade on this one. 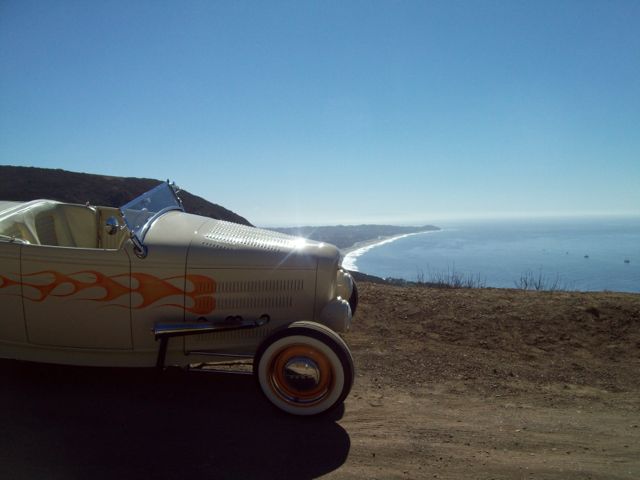 While Jane and I were on the San Diego area beaches, Dave and his wife were cruising PCH in Malibu. What a life these two old high school buddies are living in their golden years. That is the famous Jim Inglese roadster he is driving. 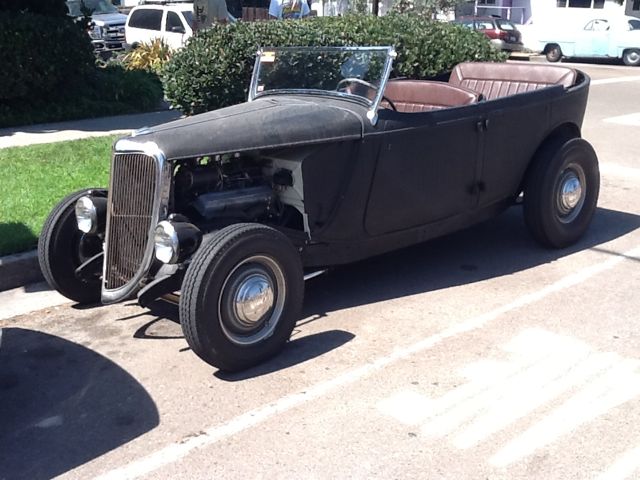 Ryan spotted this 34 tub hiboy sitting on the street at Wavecrest. Chop the top, install irons and be done with it. This is a hot rod surfer wagon for sure. I wonder if it was for sale?