We had a wonderful reunion with some of my SAE fraternity brothers over the weekend. One of them I had not seen in almost 50 years. My wife did a wonderful job of planning the event and we certainly enjoyed the evening reminiscing about our days in college. Cars were a subject also and Pepe showed well to our guest. Sometimes, as we enter the “Golden Years,” we love to look back, reflect on the past and the good times we enjoyed. Life sometimes dictates that you need the comfort of long time friends to bring your state of mind to normalcy. In college, I happened to purchase a set of real magnesium American 5-spokes that I installed on my Corvette. He remembered them as they were the only set in our small town. I kept those wheels for many years and through my numerous relocations, I either gave them to someone or sold them. I can’t recall. We were all convertible guys in college and to some extent, still our. The topless cars led to wonderful experiences through all kinds of weather and various places. Keep in mind we all grew up in the Midwest where topless was very seasonal and tops deteriorated rather quickly. The Corvette, of course, had two tops which helped save the top during those cold winters. My love for the convertible/roadster has never faded and probably never will. As you know, I am particular found of the open wheel roadsters.

My years in college often led to summers at Indy watching the Indy 500 from the infield. Hot rods were scarce, especially roadsters. As mentioned many times before, my first encounter with a true California hiboy roadster was Tom McMullen’s classic flamed beauty that was parked on the sidewalk in front of a bar in Indy. I never forgot that car and kept track of Â it for years. I watched the car being redone at CSR’s in Huntington Beach and Chuck made it into a street rod rather than a true Hot Rod. He kept the seats and other parts in his storage area of his new shop. Later, when Jorge purchased the car and had Roy redo it again, he was able to obtain some of the original parts from Chuck. The last sale of the famous roadster generated $700,000 which I believe is an all time record for a Deuce hiboy roadster. Yes, old Hot Rods with history command a big price in today’s market place.

Customs were the big rage during my youth but they soon disappeared in favor of the pre-48 street rod renaissance that occurred in the early 70’s. NSRA and Goodguys promoted the pre-48 cars through national and local events which attracted car enthusiast’s from around the world. Reproduction parts were available from several sources such as Wescott, Gibbons, Bob Drake and many others. Martens Fabrication and Brown Mold Company developed some of the first Deuce frame rails and Fiberglass bodies. Mike won best Deuce roadster at the 1972 NSRA event in Detroit. I became a distributor for them while I lived in Georgia. The 70’s gave birth to two big hot rod parts suppliers. P&J and TCI were the leaders with quality parts, reasonable prices and a reputation for quality and service. Both of these companies still exist which is a tribute to their business practices. SO-CAL also became a leader when Pete teamed up Alex and put the franchise system in the Hot Rod world. Pete is an excellent promotor, visionary and craftsman who saw a demand for the resurgence of the pre-war hot rods and styling. He and his team have developed a line of parts that make building your dream as easy as your checkbook can handle.

Today, the landscape has changed and the younger generation have made their mark on the hobby with the Camaros, Mustangs, Tri-Five Chevrolets and Mopars of our youth. Customs are back but not like in the 50’s. I know the hobby is safe Â and the fire will continue to burn in the belly for many years in the future. I am a happy man. 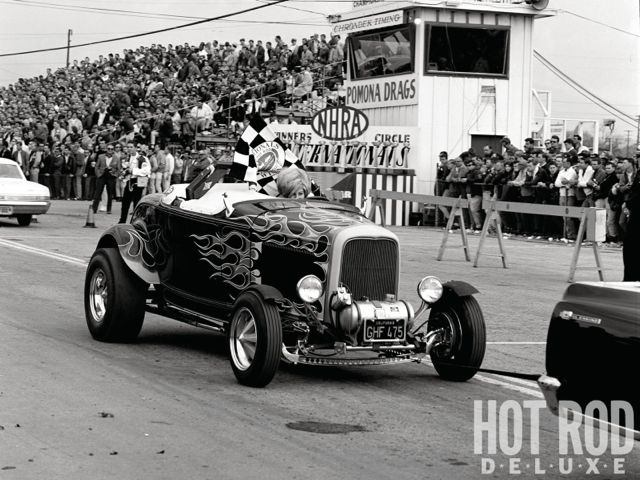 Rose was driving in this photo. Note the rear fenders. This was in Pomona not Indy where he also made a run down the return lane with Rose driving. 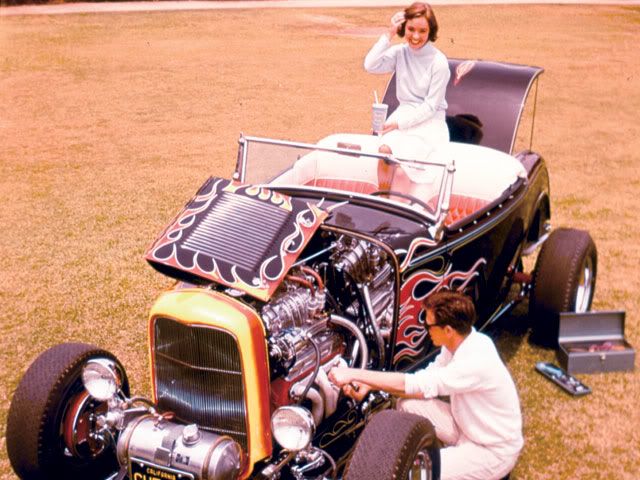 Here is another famous cover shot of the famed and flamed roadster. Note how young Tom is in this photo. Chrome firewall was a standard addition to most Deuces built in this period. Leg room was not a concern. 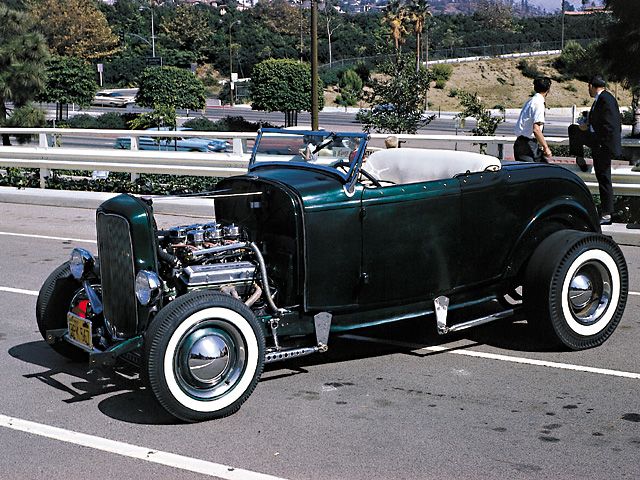 Here is another version of the roadster when it was used on Lassie. 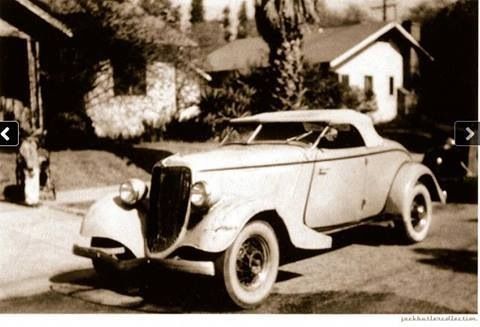 Going back a little earlier and this was a high styling 34 roadster on the streets of LA. Not lowered in the front or rear but he added the Duvall and chop to make it cool. 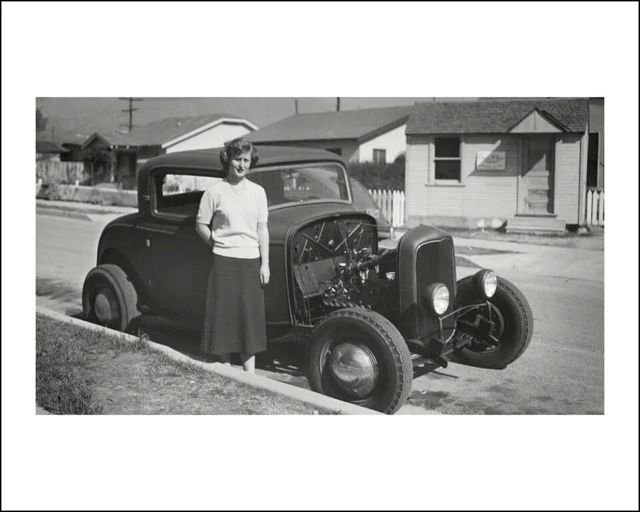 Coupes and girls were also good looking back in the day. What hot rodder wouldn’t be proud of his girl and car? They are building this style again but I don’t know about the ladies. Skirts seem shorter today and lots of Tattoos are popular. 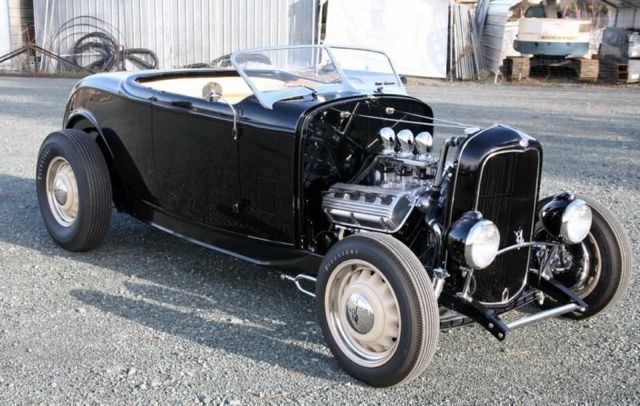 Here is a modern day version with an older build style. I have seen this one at Bakersfield and it’s nice. 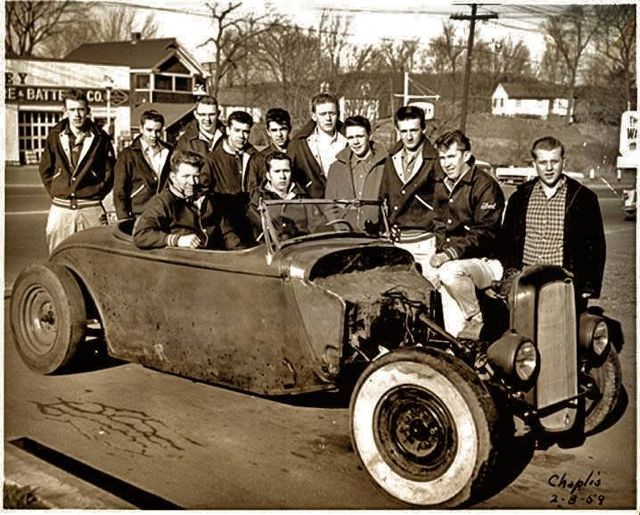 In 1959 I was in high school and these type of cars were scarce in Decatur, IL. The group car club photo is priceless. Note there is no motor in the car. 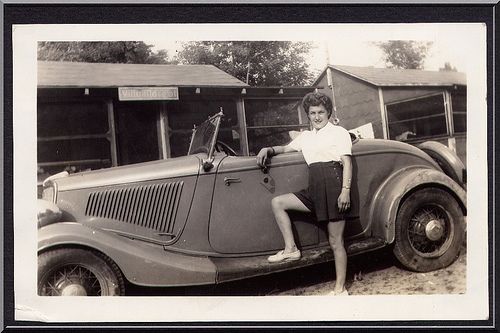 The car is looking more stock and the skirts are getting shorter so this must be in the late 50’s.

Each year at JCP I love to see the new/old style hot rods show up at the Throttler’s picnic. This year it will be in our town. The young guys love the old looking hot rods. 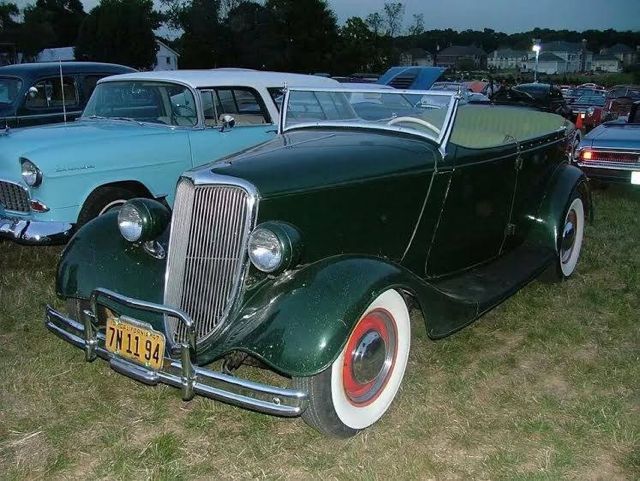 A tub has the capacity for more people and more fun on your cruises. Smooth hood sides were popular in the early days, but cooling problems are experienced in most cases. 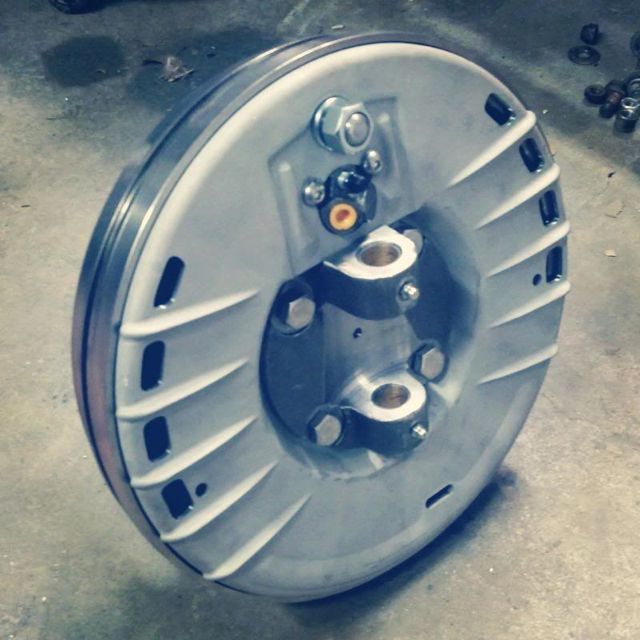