I rolled over and looked at the alarm clock. It was 5:00 AM and I was still real stiff for some reason. I could hear the wind blowing and see the palm trees swaying out my master bedroom window. I had to make a decision on whether to crawl out of bed or turn over and stay in bed for a couple more hours. You see, this morning is the Early Times Mid-Winter Rod Run which is always one of my favorite. I tapped the wife and said I didn’t feel like going today. She said O.K. and we both went back to sleep. I couldn’t sleep thinking what I would be missing if I didn’t go. Bob-O called and I told him to go ahead but my wife said we need to go, so off we went to Long Beach. I had gassed up Curvy so if we hurried we could make the start of the run at Richards shop in Long Beach. The traffic was light and so were the cops, which meant we arrived with time to spare. I saw Walt and the two Dave’s walking in the street looking at the cars. My wife and I joined them and soon were in the thick of things eating donuts Jim had purchased. My day was now looking better and with 4 Aleve and some back rub I was feeling better.

The first stop was Rick’s Speed Shop at Price Transfer. I had never been in the shop before and was I really surprised how nice it was with a complete car emporium, Diner, restoration shop and room for whatever you wanted to drag home. Rick is known for his massive Willys car collection which is housed in a separate room. I think he has one of every type ever produced including the famous gasser model. This was the highlight of the day for Jane and I. After drooling for 30 minutes or so, we headed west to the Early V8 Store in San Dimas. I enjoy going to Bill’s shop as he always has some interesting new rides and parts on display.Â The weather was perfect with sunny skies and relatively warm weather. (high 60’s) We looked at the cars, talked to old friends and soon headed out to the John Force shop in Yorba Linda.

The 91 freeway was crowded, as usual, but we were soon turning into the huge Force complex. I had never been to venue previously so I was glad to see the layout. The retail store was open but the museum was only visible from the outside. We enjoyed the visit and after walking around we headed for the famous Harvey’s, Johnny’s and now a Bob’s Big Boy for a great hamburger. The traffic was heavy but Curvy never overheats and ran fine all the way to the restaurant. We enjoyed lunch with the group and finally headed home to watch the Oscars.

I would like to thank the Early Time members who planned and carried out the 44th annual event in fine style. I always look forward to the event and hope I can make it again next year. Congratulations for keeping the fire burning in this old man. 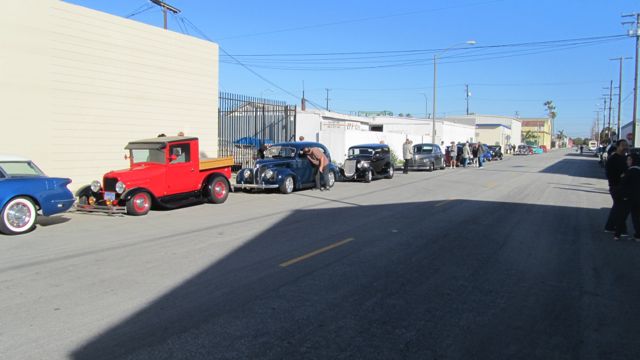 The early line up at Richards Hot Rods was around 60 cars of all makes and models. We picked up our directions and waited for the tour to start. 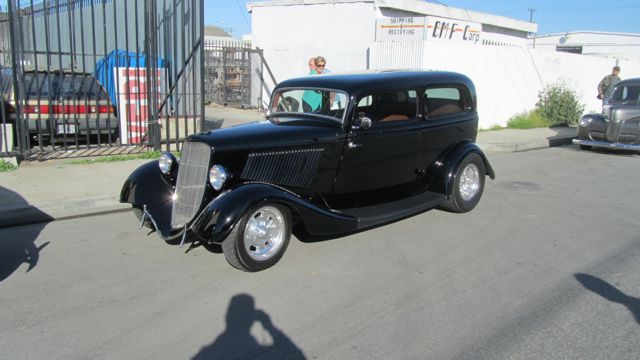 I love 33 sedans and I recognized this Rodders Journal feature car right away. I talked to the owner at most of the stops. I watched Geoff build this one in his shop in the late 80’s. The car runs a 502 big block and sounds really good. 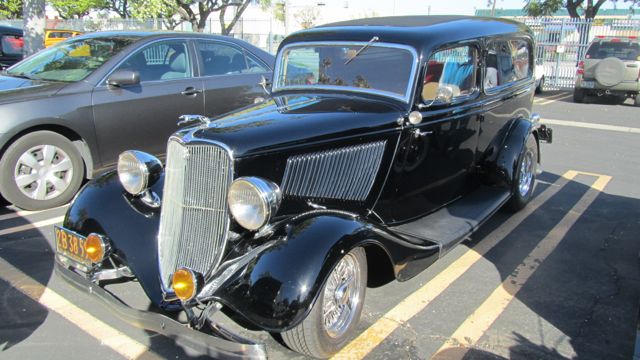 A very tasty 33 delivery was parked at Ricks and I just had to have a look. These are rare cars in todays hot rod scene. 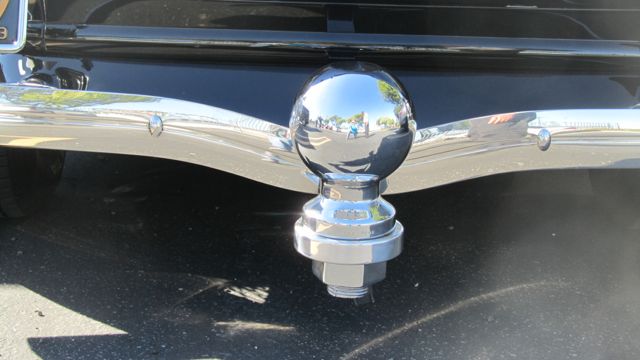 The delivery had the largest trailer hitch ball I have ever scene. He must be pulling a real heavy trailer. The ball was around 10″ in diameter. 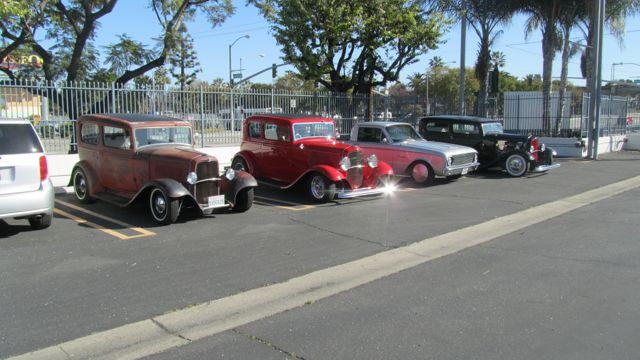 Pete has his sedan on the run and was parked next to some other deuces. The Falcon snuck into the power parking deuce section. 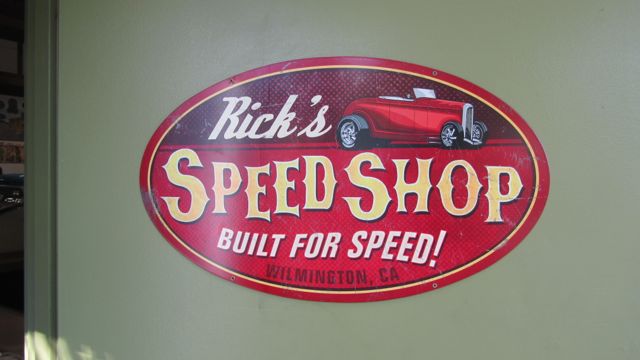 The small sign on the door did not give me a clue of what to expect until I walked inside. 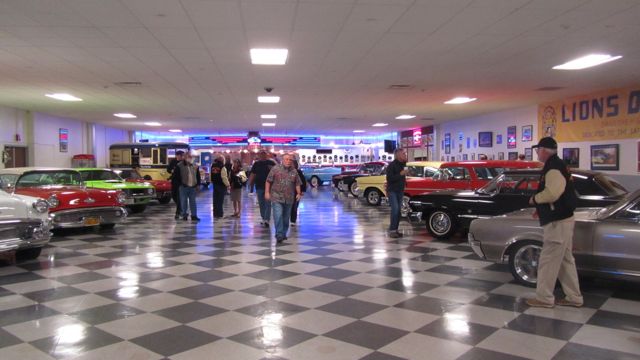 Here is a view of one of the showrooms and Diner. Everything was spotless and Rick was a gracious host. 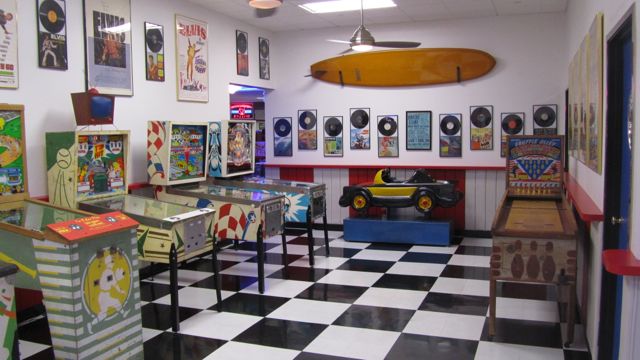 The Diner contained a pin ball machine room with all the correct memorabilia on the walls. 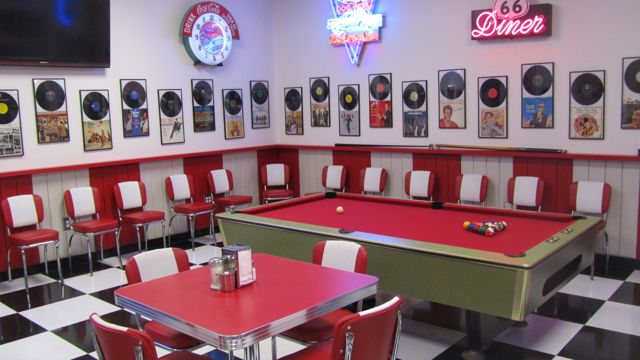 A full service Diner complete with pool table reminded me of my youth. I used to make my car money playing pool. 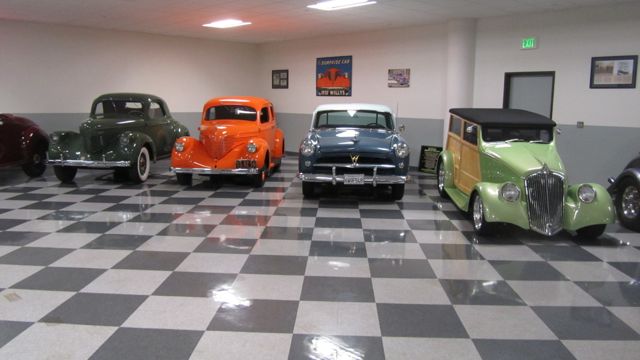 Here is a partial photo of the collection. I am not an expert on Willys but this is the place for Willys fans. 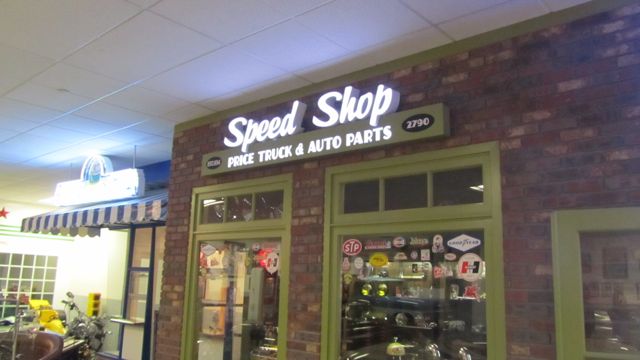 The Speed Shop was authentic in every way. I remember our local shop in Decatur where I spent my hard earned money. 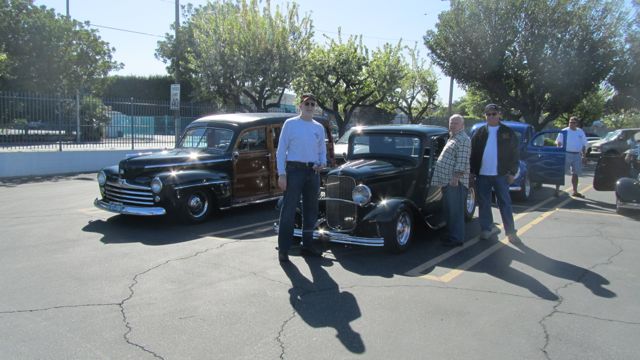 We soon were ready to head out to the Early Ford Store. Walt, Gary and Jim were eager to get on California’s freeways on such a beautiful day. Jim said the 34 tub was too cold for him. 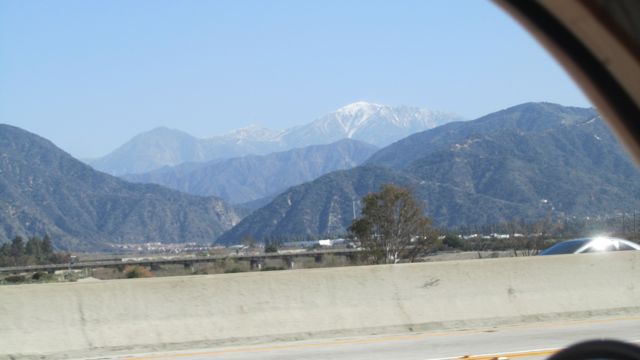 The mountains were covered with snow but inland was picture perfect. I love California. Curvy has a great heater as the wife gets cold. 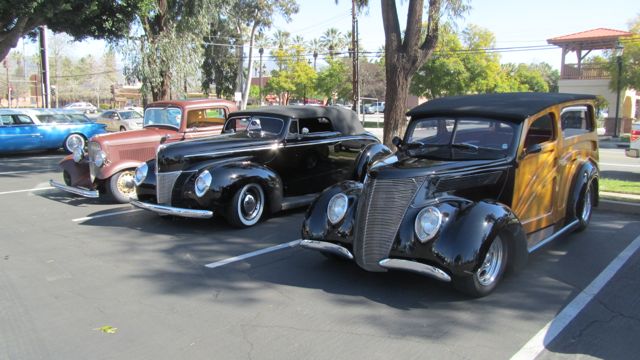 Our lunch bunch parked under the trees at the Early Ford Store. Dave led the way in his fresh 40 convert that he purchased in 1975. 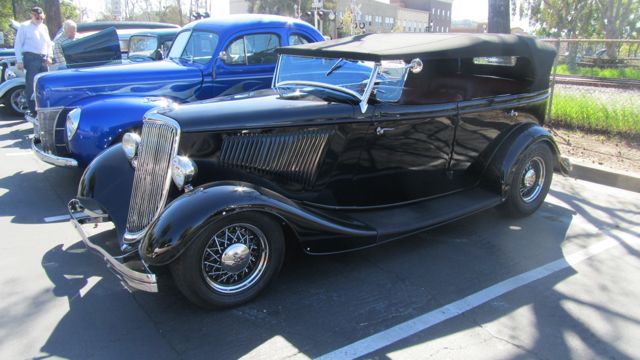 Jim has side curtains but left them at home. It is cold in the early morning on LA freeways and back seat passengers need to lay down. 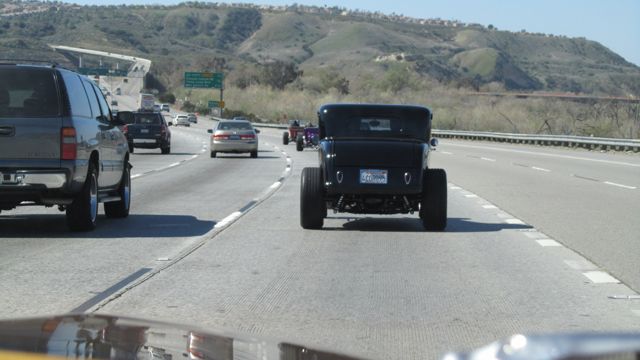 We followed this nice 5 window down the 91 freeway to John Force’s shop. Traffic was very heavy but fast. 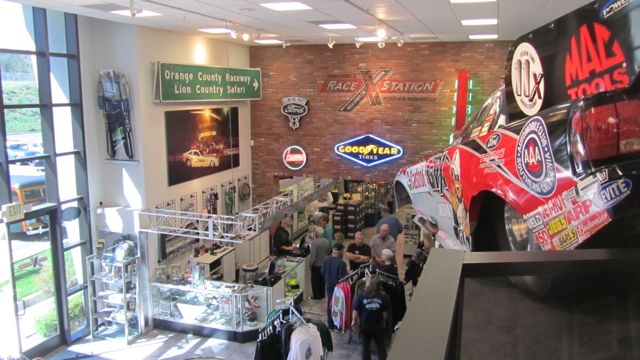 The Force Race Station retail store was full of goodies for the racing fan. 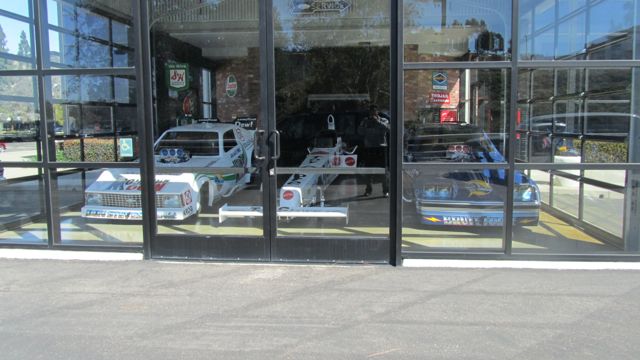 The museum was closed but we could peek through the windows to see the famous cars of his family. He is the master of the Funny Car. 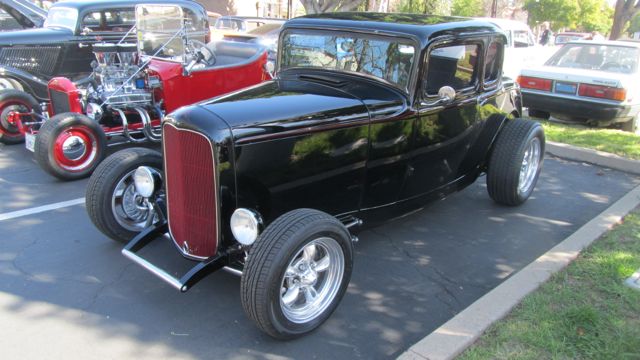 I liked this little 5 window coupe. I have seen it before but not going down the freeway which is where is looks fantastic.