Jane and I headed down to Doheny for the woody show on Saturday morning. The skies were dark and rain was in the forecast but we love the Dana Point area so much, we decided to go ahead and go. We met up with Walt and Lorraine for breakfast and soon we were parked on the beach with 129 wonderful wooden wagons. If you have never experienced the rows of tailgates facing the sand then you haven’t lived. The rain didn’t come, at least not early and with moments of sunshine, the day was wonderful. We saw many old friends, had a nice lunch and even saw a few new woodies. Since we knew traffic would be difficult on the way home we left and headed up I-5. The rain started as soon as we started the car and continued all the way home. We had a very tiring drive home, due to four accidents and one fatality. It took us 2 hours to go 2 1/2 miles due to the motorcycle fatality. It seems they cannot move a body until a full investigation takes place which sometimes is all day. We finally made it home and were soon in our respective recliners for the evening. It was a great day at the beach with the fabulous woodies. I think our next show will be in Lake Arrowhead.

Walt and some friends were also in Bakersfield for the Friday show and said the weather was decent but I heard rain came later on. We need rain so desperately that any time it does rain we don’t mind. As we head into May, the LARS comes to mind and reminds us what a great city LA is for car enthusiasts. I am living the dream and doing my part to keep “The Flame Burning”.

Make sure you reserve your rooms in Pomona as they sell out fast this time of year. The same goes for Santa Cruz which is the same weekend as Forty Ford Day. 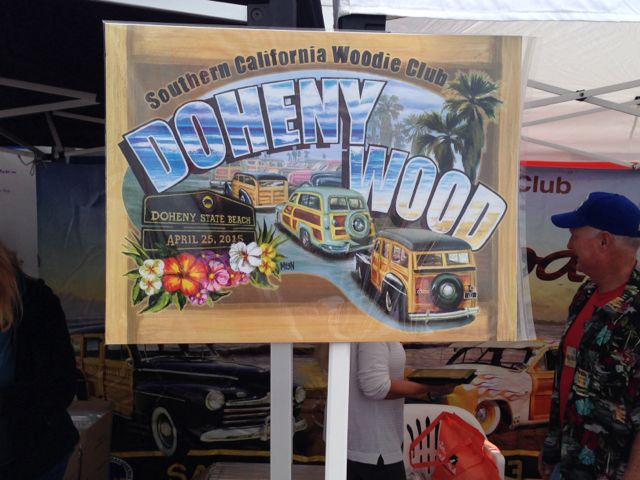 The art work was really nice this year and was also available on a T-shirt or sweatshirt. 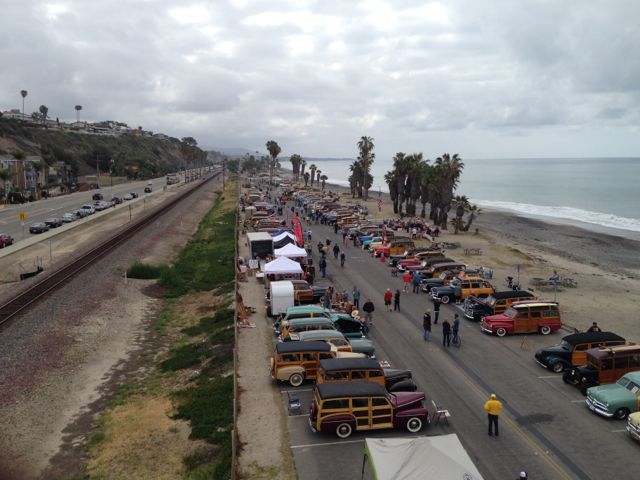 The overpass bridge to the beach provides an excellent photo opportunity. Note the cloudy, dark skies and calm Pacific. 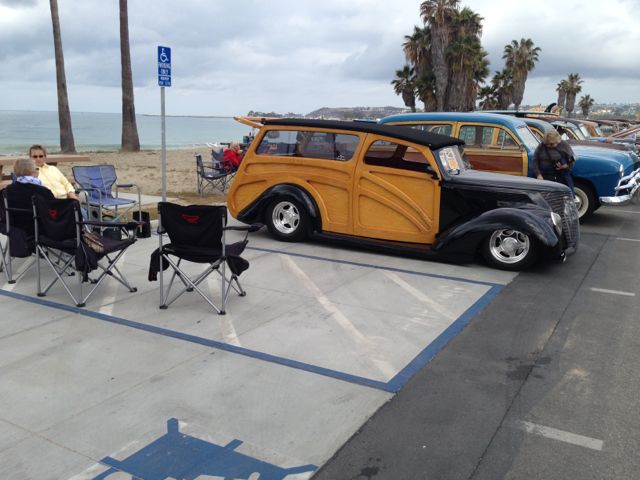 Walt had an ideal location right on the beach with no one next to us. The ladies enjoyed the fresh home made cookies that Lorraine brought. Curvy sure attracts a lot of questions and photographers. Air ride allows lowest possible stance. 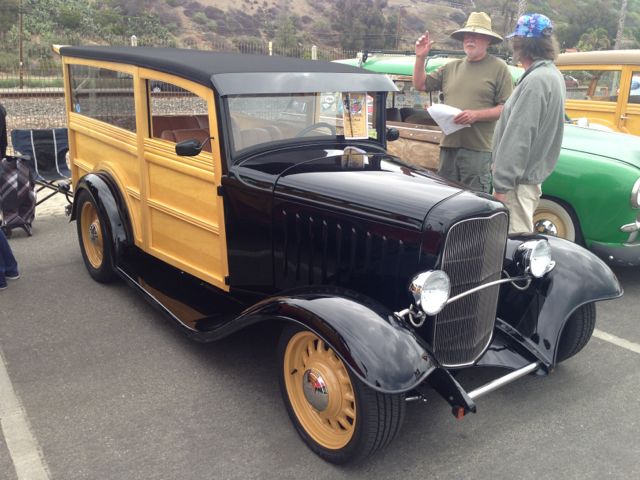 Walt and I met a new friend with his stunning 32 phantom woody. Doug Carr of notable fame was helping the owner with some of his wood concerns. The car is out of Oregon and was built by a shop teacher. TCI chassis, Ram Jet, artillery wheels and very nice black paint attracted a lot of lookers and questions. The cowl appears to be from a sedan as the doors are flush with the woody unlike the original wooden bodies. 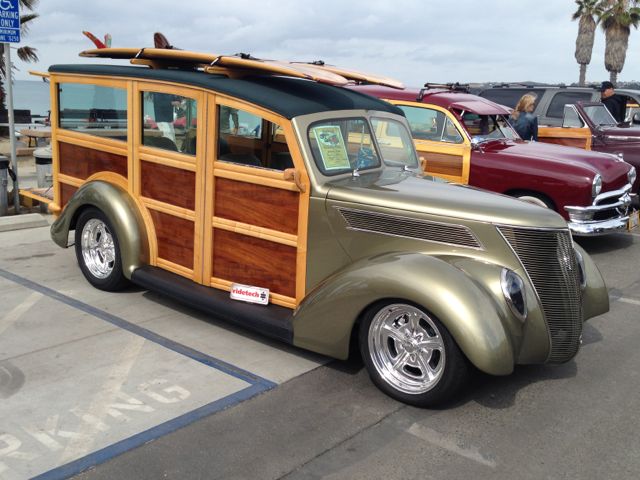 The fit and finish on this 37 sheet metal was perfect. A 37 is difficult to maintain perfect gaps along the hood and fender lines but this on was perfect. We thought it was Hercules body but we didn’t see any of his logos on the car. 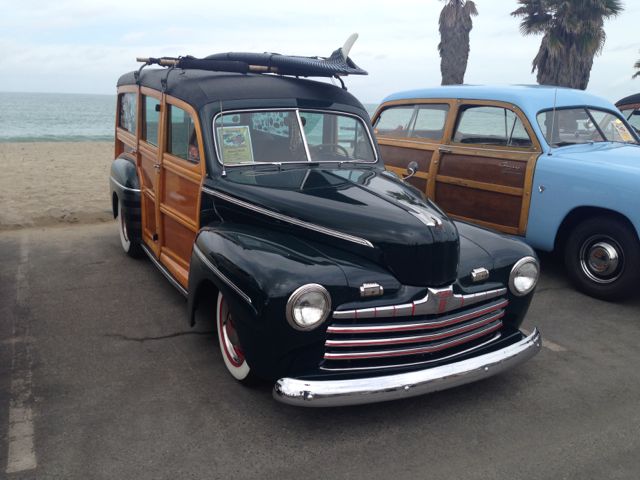 Jim, from Brizio’s was on hand with his well traveled 46 woody wagon. He has a perfect stance on this car with the IFS and big and littles. 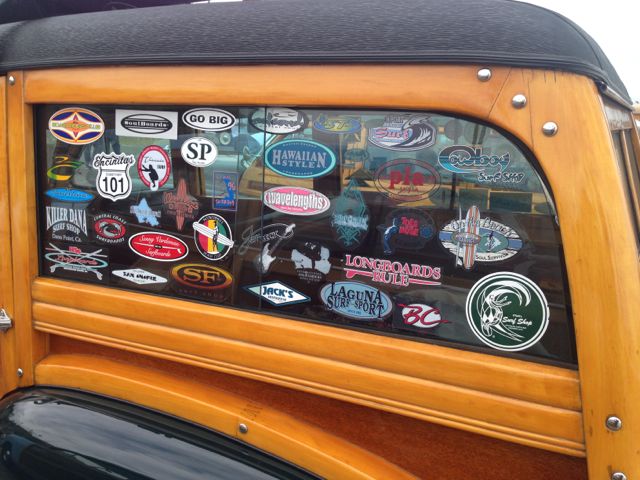 Jim is a surfer and has the decals to prove it. His wagon has seen most beaches along the coast of California. 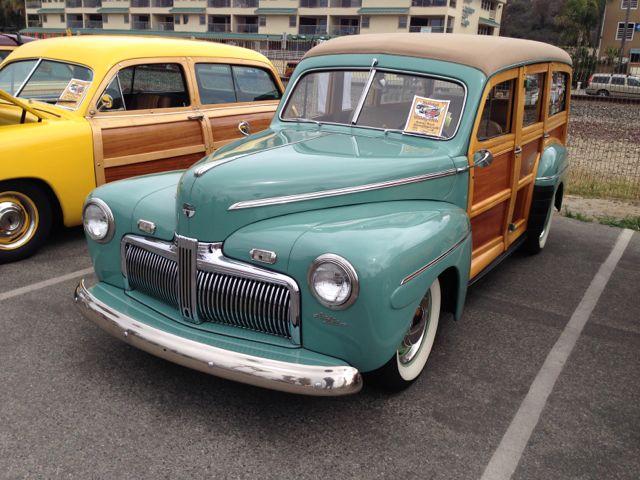 Jane and I liked this rare 1942 wagon with an appealing color and perfect wood. 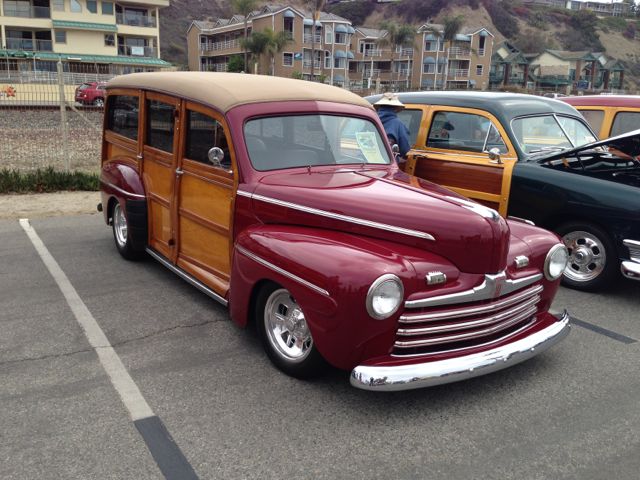 Jeff still owns one of the first Thelan built 46 woodies and also has been up and down the coast several times. He told us he is busy building a 40 coupe in his retirement years. 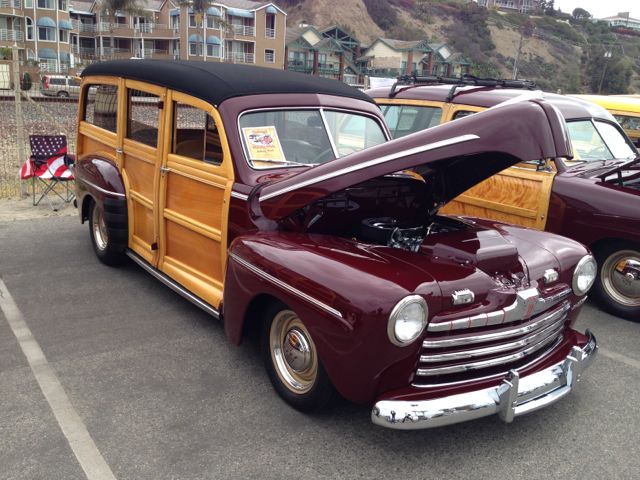 Jim, another long time woody owner keeps his in tip top shape and recently added a GM ZZ430 to help him move these heavy wagons. He is also a 40 coupe owner. Could this be a trend? 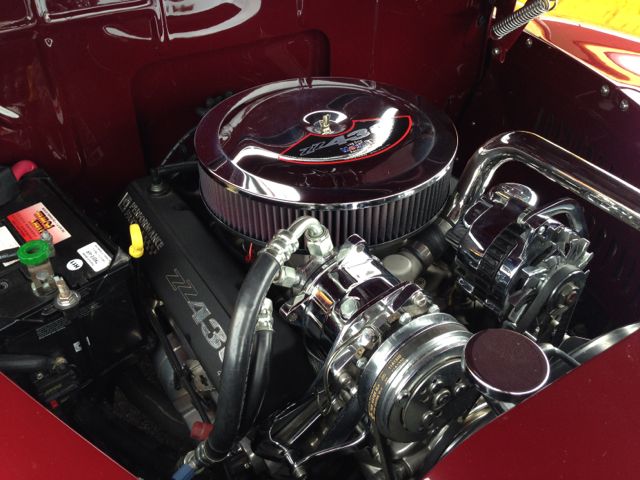 A spotless and very detailed engine compartment on a well driven woody takes lots of effort. His maroon is a fleet color and is one of my favorite. 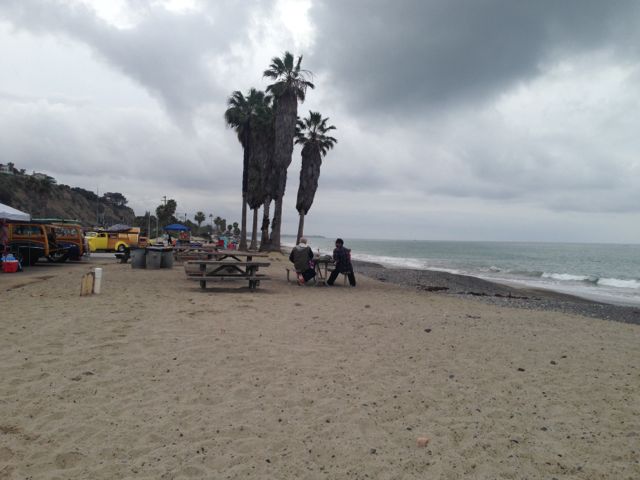 As we headed home, the skies started to turn really dark and soon the rain came pouring down. See you next year.

Photos of the Day 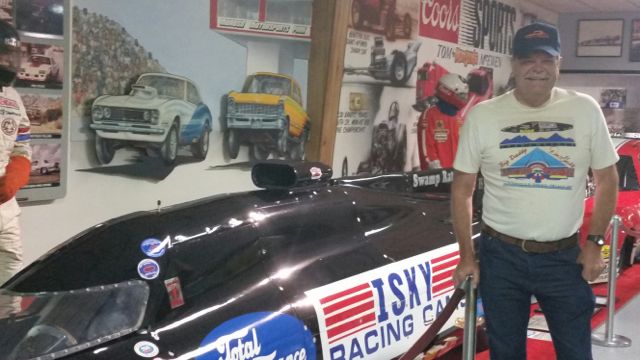 My friend George and his wife Karen are touring the South and stopped at the Gartlis Museum to inspect the Bonneville car that put Don in the 200 mph Club in 1988. George was in Bonneville during his run and purchased a T-shirt from Don which he still has and wore to the museum. Now that is quite a story. 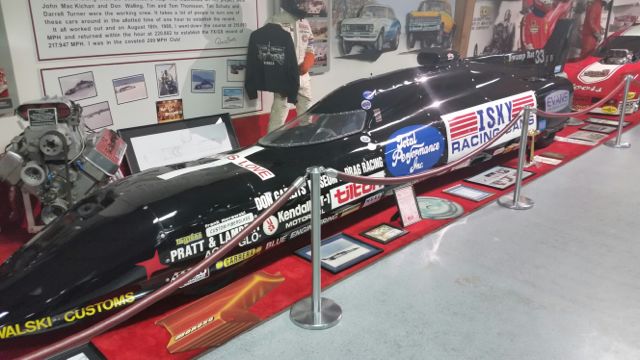 Here is a photo of the car and the memorabilia that went with it.