Have you had enough basketball for a while? I can’t seem to “Stay Tooned” to basketball like I can football, but I have watched more than I normally do. I am working on a 40 firewall for a customer and watching the games. I don’t know if you have ever taken a 40 firewall out by drilling the spot welds, but there are about 80 or so spot welds holding it together. I sold this to a fellow who is wanting a stock firewall rather than a Direct Sheetmetal one. It is a major time consuming task but you can accomplish it in a day. Perhaps I should have kept it as they are hard to find in good shape. Most have been cut and drilled full of holes. I don’t plan on any more projects that would require a new firewall so I let him put it to good use. I can live with either style but prefer the stock look on my personal cars. I have never installed one but I am sure it requires a lot of patience and a few “kind” wordsâ€¦more later.

Dave, at Frantic Fred’s, pressed on my new wheel bearing with ease as he has done many times. He took all the safety precautions as they do explode with hard resistance. I did not know that. Safety glasses, white grease, shielded axle bearing plate and slow pressing resulted in a perfect job in less than 15 minutes. I think I could do the job if I had a H press and the proper bearing plate. Correct tools make all jobs easier but I don’t have any more room in the garage.

I receive questions from time to time about my Lucy and Andre build projects and try to respond as quickly as possible. Sometimes I find that going back and looking at my build process provides me with enthusiasm for another project or at least refreshens the mind with how much I enjoy building cars. The journey is always better than the final destination for me. I sometimes pounder over how to make or install something for a long period of time. The wife wonders what is wrong, and I tell her, “The transmission mount is in the wrong place and I need to change it.” She laughs, makes a suggestion and is normally right. How about that! Sometimes I can’t see the obvious as I am too close to the problem, if you know what I mean. Lucy and Andre had lots of challenges during the 2 year build but somehow I managed to solve them and wrote about my solutions to help others. Terry and Bob have both added their own challenges to the projects and solved them. I can’t think of anything more satisfying than stepping back and thinkingâ€¦that sure looks good.

Have a wonderful week solving your problems and moving foreword on your projects. 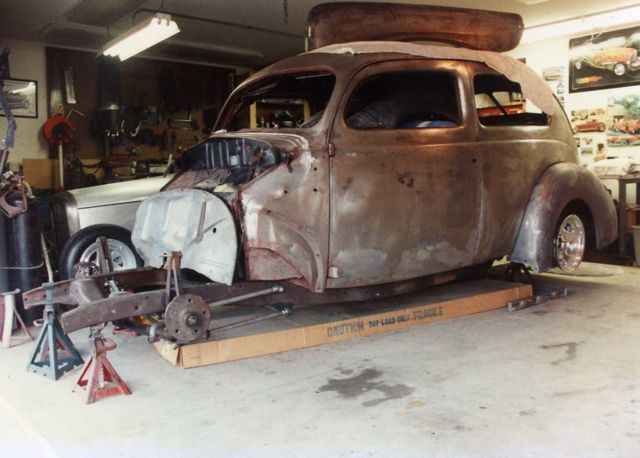 I pondered over this project and finally had Fat Jack build me a chassis using his 4-bar system front and rear. I had a hard time accepting the new system but it worked really well. Coil overs in the rear were really new to me but they also rode excellent. I think John can still build this set up for you. He makes the front hangers from old bones as CE no longer sells them. The Deuce roadster in the background was my first Boyd fully independent roadster and it too rode like a late model car.

O.K. so I got in over my head in this project and even my wife couldn’t solve it. The plan was to build a tudor tub with a Boyd chassis. I found a roadster cowl and a sedan back half and planned to have Craig at Boyds build the rest. I just couldn’t accept the large doors of the sedan and finally, sold the project and drove the delivery for a few years. Sometimes my dreams are not within my budget. 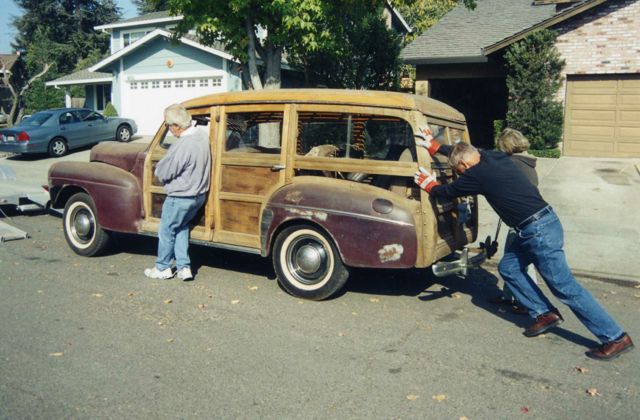 Here is another dream that got away from me. My back was still in good shape in this photo and that it’s my wife pushing along side of me. I had no idea what was entailed in redoing the wood $$$$, but I soon found out. My wife still is mad at me for selling this one. 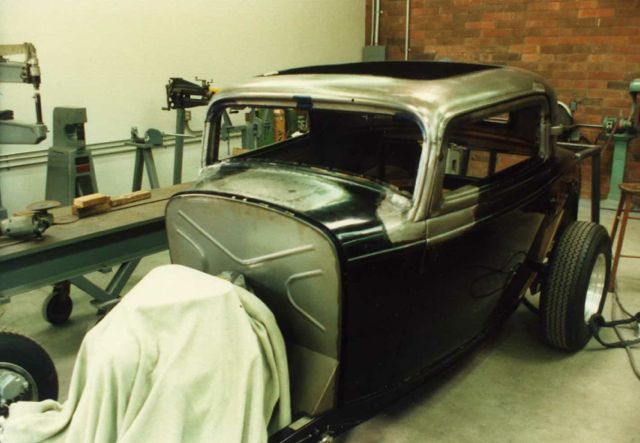 My long term project sat at Steve’s shop for over a year and was finally finished (sort of) when I moved it to Dan Finks. Walt has this car now and is enjoying solving his challenges. Hot Rods are never done. 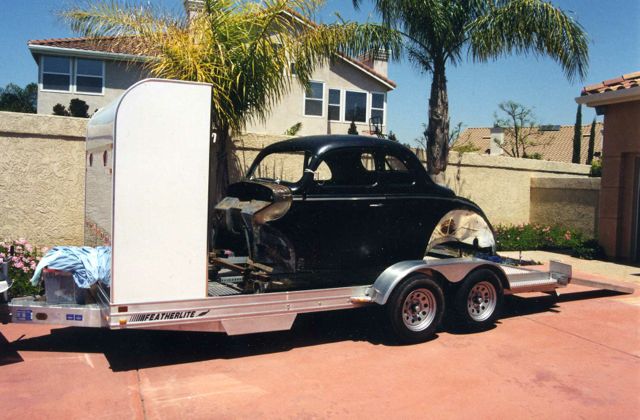 Jane did not approve of this project but I had to have a 40 coupe. My garage was full so I stored it under a tarp in the back yard. HOA soon sent me a letter. This was the old CT Crankshaft coupe with lots of history. White inner fender panels indicate a back in the 50’s build. 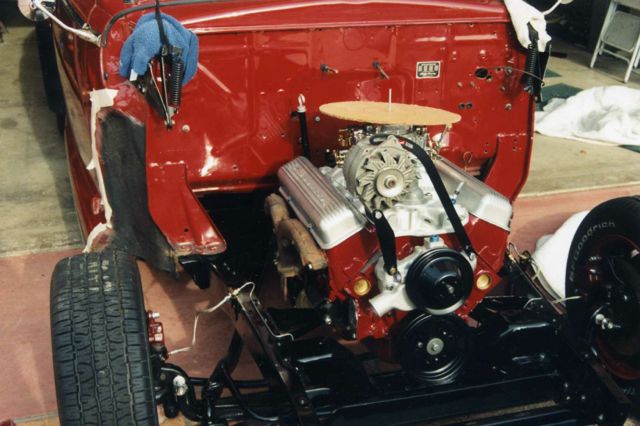 My love of the 46/8 Ford convertible led me to buy a restored car and later make it a Hot Rod. This was a Dearborn winner but I am not a flathead lover so I built a hot 327 with a lumpy cam for the car and actually finished it. I should have kept this one. No real problems with this one except working on the floor to remove the rivets is something I will never forget. @$#$%&^ 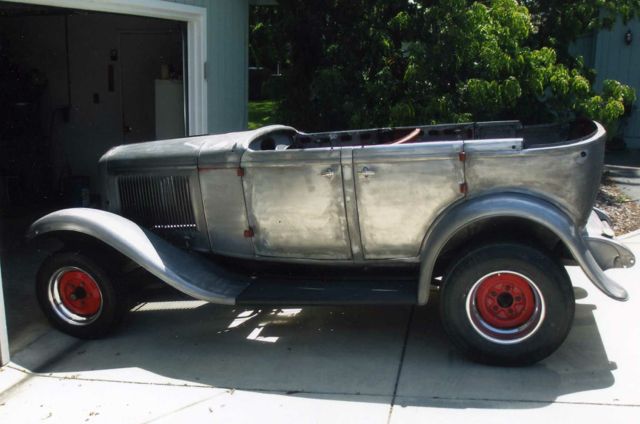 This was not one of my projects but Roy had Jim do all the body work and then sold it. These are rare indeed, but they make a strong alternative to the roadster for me. 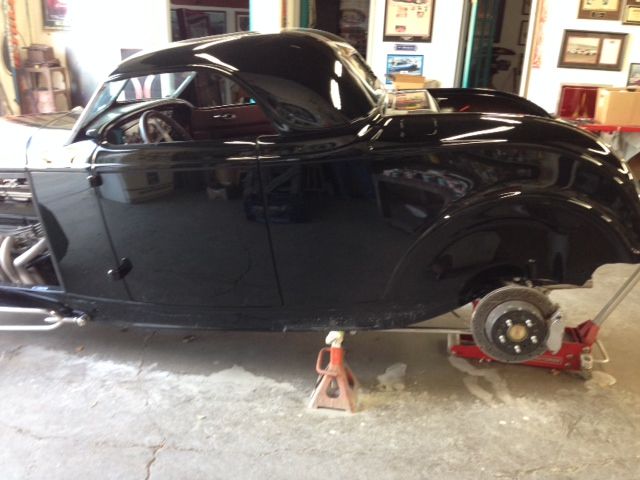 Phil has decided that he longer required the flames on his beautiful roadster. He has removed them from the body and is working on the front sheet metal. He hopes to be ready for the Orange show. The top is the real deal by master metal man Terry Hegman. 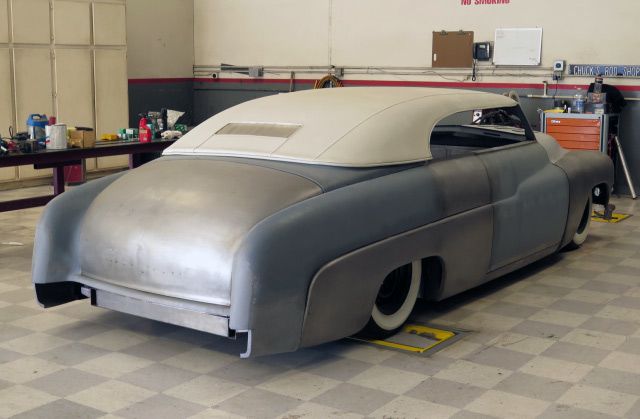 Chuck’s Rod Shop always has some interesting projects in his shop. JR. runs the deal now and TRJ stopped by during the GNRS and shot this photo. Steve and JR. go way back. Used to be a 4 door. 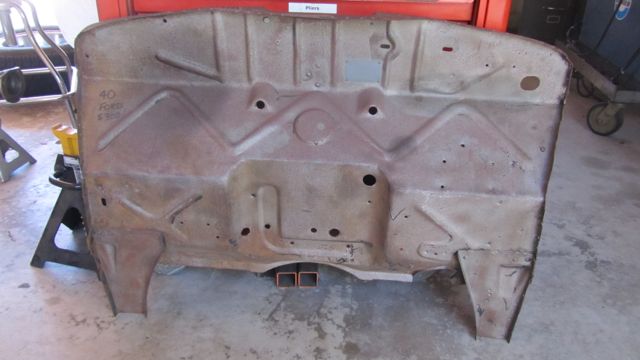 Lots of work to remove and install a 40 firewall but the effort is worth it in my mind. 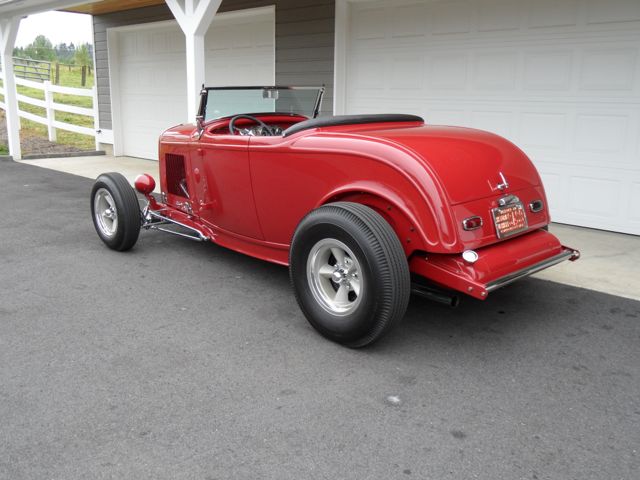 Steve’s latest Deuce is an original Henry roadster that he is driving to the LARS this year. It certainly has that” Dave Simard” look to me and that is a good thing. Nice ride Steve. 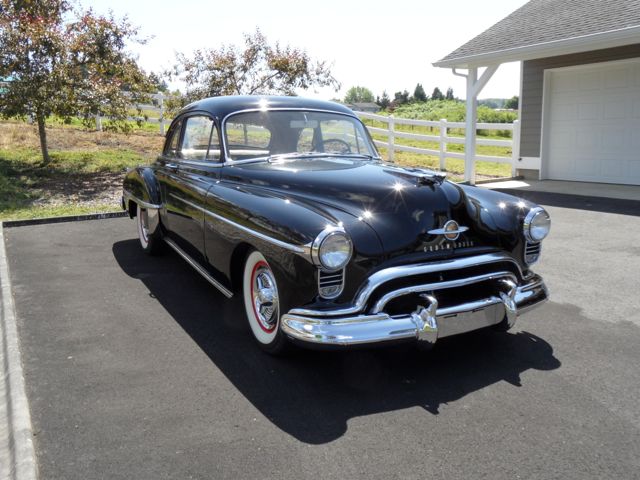 Steve crossed over 48th street many years ago to acquire this cherry 1950 Oldsmobile (stick shift) which he has owned since 1995. The car was featured in Peter Vincent’s book, Hot Rods. My father had a green one Steve so this brings back memories to me.