Saturday was a fantastic day for me as I relived my youth during Hot Rod’s 65th Anniversary Homecoming car show at the Fairplex in Pomona. I headed for the event not knowing what to expect, but upon arriving at the Fairgrounds, after following a Deuce roadster on I-210 for many miles, I could feel the adrenaline beginning to rise and I knew I had made the right choice on attending.

The show was very well organized and from my perspective it was a very successful event. The crew at Hot Rod are to be congratulated on holding a great show and attracting all the cover and feature cars from the past and present. There were four buildings with all types of Hot Rods. The outside parking was sold out and the vendors were located where you could easily visit each one of them. On a side note, I was really impressed with the Chevrolet ride and drive activity, the inside display of the Icons of the brand and of course, the new 2014 Corvette. Since this is a hot rod show and Chevrolet has been building great cars and engines since my youth, I was happy to see them supporting the show. (I am bias you know) My wife wants one a new Corvette as we had several during our younger years. We got married in a new 1965 convertible and drove to work in Detroit the next day.

Bob and I walked until we could not walk anymore, rested, and then walked some more. I saw several old friends and met many new ones. I was truly amazed that some of these car are still around and are in nice shape. Some have been restored but many are just as they were in the 50’s through the 90’s. As I looked at the simple display and read the placard, I could recall the car and the time period in my life. I always have been a car fanatic and avid reader of the Petersen magazines. I once was caught reading Hot Rod, concealed in my note book, while in history class. Little did the teacher know that I was reading history that would stay with me forever.

Driving home in the heavy traffic gave me time to reflect on my youth which, for most of us, was where we developed the love of Hot Rods.

The fire is still burning as they just threw on another log. 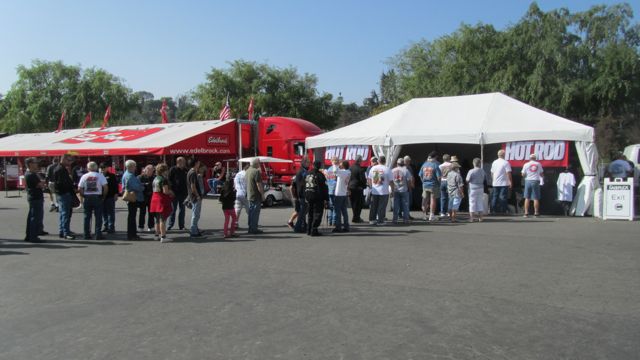 Lines were everywhere you went. I wanted a T-shirt but couldn’t see standing in line for an hour to get one. I am sure they sold out as they were nice looking shirts. 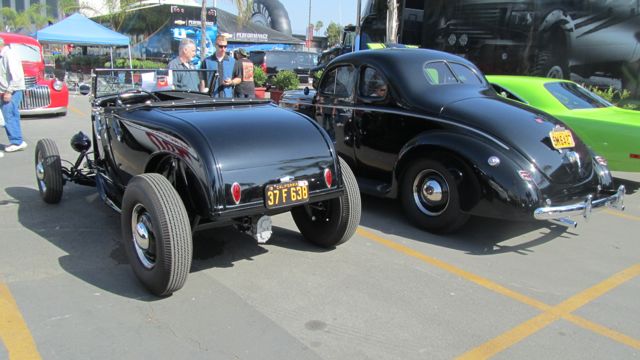 I spent the first hour in the outside parking lot and I am happy I did. I found the perfect pair sitting behind one of the vendor displays. Both were period perfect and had a crowd around them all day. The outside parking display sold out on Friday for Saturday’s show. 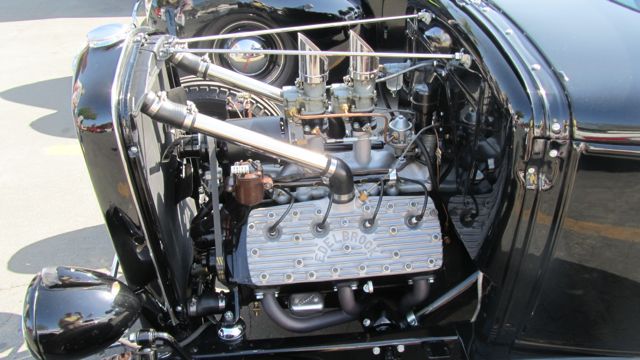 The flatty in the model-A was very nicely detailed and sounded like it was ready to head for El Mirage. The entire car was flawless. 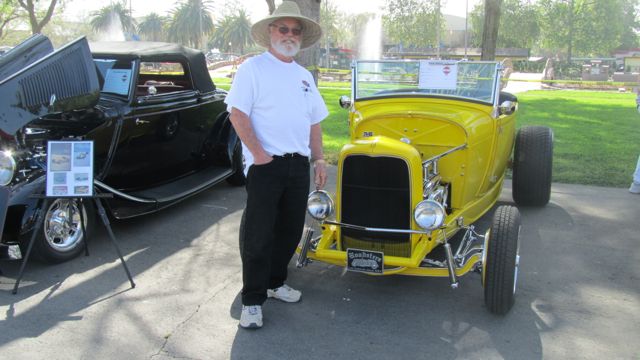 My friend Bob E is smiling as he finished this roadster a few years ago. Bob-O owned the car when it was on the cover of Hot Rod and Warren now has it running to suit his taste as a member of the prestigious LA Roadster Club. Bob-O was a member also with this roadster. Some of these cars just keep showing up which is wonderful. 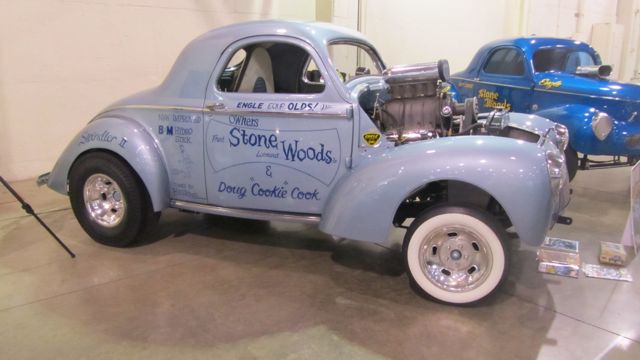 In my college days I used to watch this one run at Indy. Everyone would stand up in the grandstands when he and Big John would pair up. 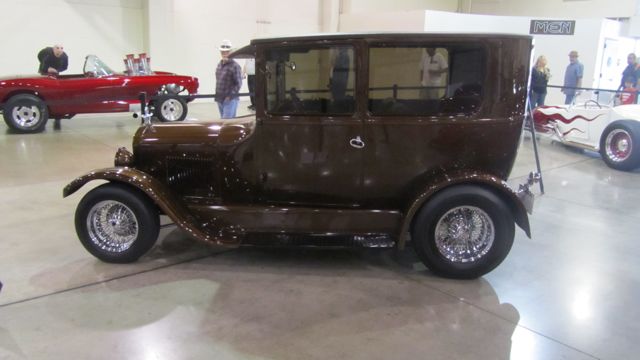 Lil John’s T was way ahead of its time and still looks in fantastic shape today. The Petersen Museum owns this car currently. 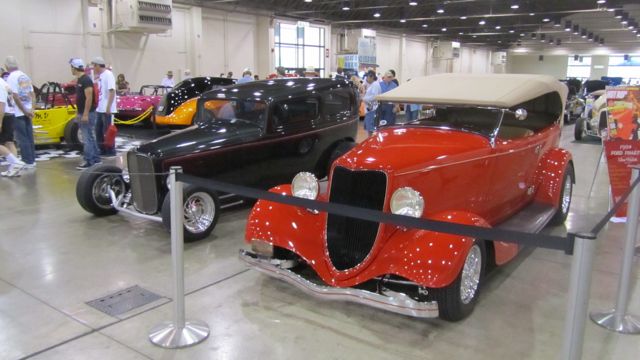 Diane and Sharon had their cover cars on display in bldg. 6. I certainly admire those who can hold on to their dreams and keep them in such pristine shape. I watched both of these cars being built when I first moved to CA. 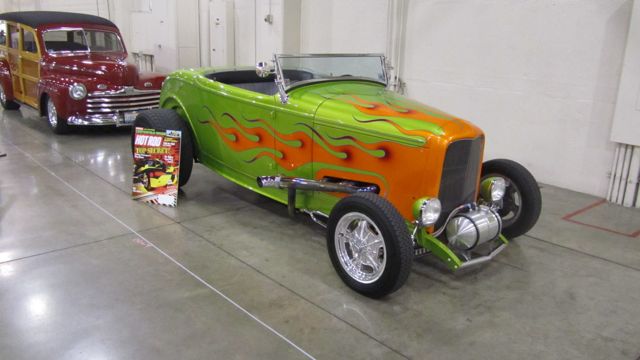 After P&J’s, Pete built this Deuce for a full feature and cover in Hot Rod. I think it is still in the extended family and it looks brand new. Wescott had the only game in town when he built this one. The woody in the rear was my first dream woody. The cars were displayed without stanchoins Â in most cases which made viewing easy. 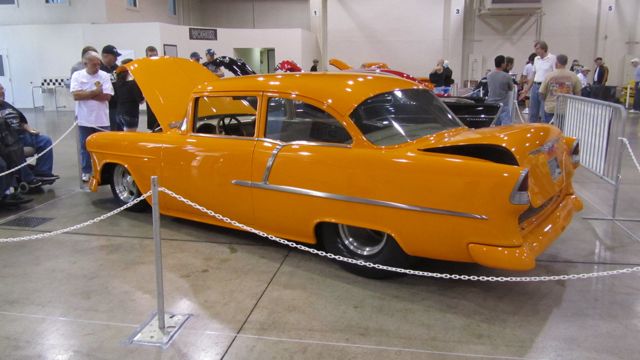 Scott’s 55 tudor post has been one of my all time favorites since he drove it to LA to show the folks at Hot Rod. His use of paint and detail for the engine compartment was on of the first successful attempts that is still being copied today. 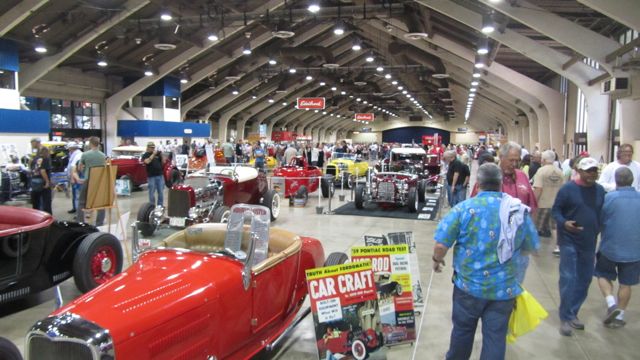 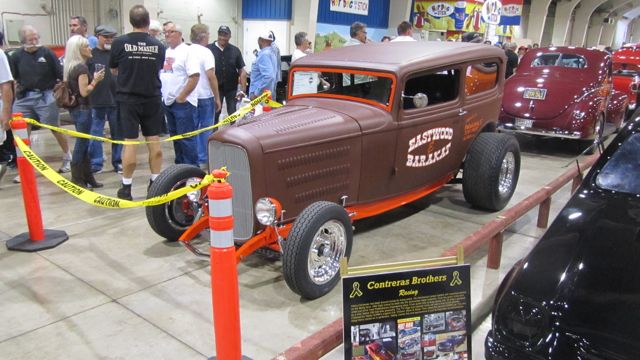 Pete and Rick finished to clone of the original cover car just in time for the show. See the HAMB for full details of build. Workmanship on the car is first class with typical Eastwood engineering and style. He is the master of the Deuce chassis. Congratulations for making it happen as I did not see the first car.

Â Saturday’s Pick from the Past! 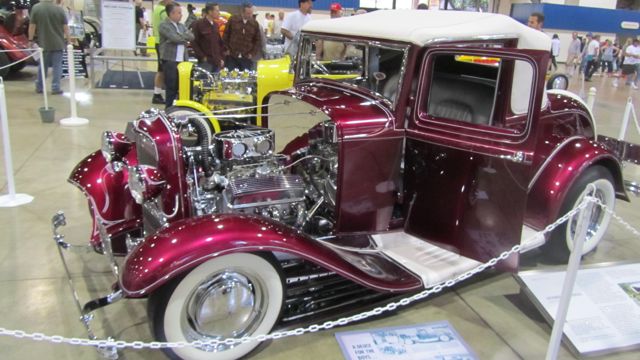 I loved this car and can remember when I used to look at the story for hours and try to duplicate some of the details on my ride. Standing there and reminiscing made me think about my old Deuce in the 70’s.