Walt and I are finally home from our road trip to Colorado. The trip was filled with adventure, life experiences and anxiety. Life events at any age are memorable but at 72 years old they can cause anxiety. Such was the case on our trip. Day one went smoothly until we reached St.George, UT. The signs were indicating heavy winter snow and they were correct. We were stopped on I-15 for a while due to road closures and finally ventured on to Utah with whiteouts and sub-zero temperatures. I know we should have stopped but there was no place to stop. Finally, we reached a small town around midnight and called it a day. The next morning proved to be even worst with snow, ice and cold temperatures. Walt did all the driving and we somehow made it Denver around 8:00 pm. Terry was glad to see us and provided us with a nice warm place to stay. We loaded up the delivery early in the morning and headed home the southern route through New Mexico and AZ. All went well and after 13 hours we landed in Flagstaff for the evening.

The next morning was really cold, -3 degrees, and we had a hard time starting the diesel equipped truck. After a long warm up, (required for diesels) we headed toward CA. We only drove about 10 miles and the engine light came on indicating our electronic throttle was inoperative and we were in the limp home mode. I won’t go into the details but we spent 3 nights in Flagstaff waiting for the parts to arrive so we could repair the problem. Flagstaff is a beautiful city, 7500 feet elevation (hard for me to breath) and very cold. I have lived in sub-zero weather but not in a long time. The dealership called around 11:00 on Wednesday indicating the truck was ready to go. Walt and I hooked up the trailer and headed to CA again. Walt drove for 8 hours and we made it safely to Simi Valley. My wife was glad to see us and helped unload the new delivery. The car is equipped with Inglesee fuel injection and started immediately even after sitting outside for 4 days.

I am especially grateful to Walt, Jim and Terry for making a long time dream come true. I would not have the delivery in my garage without their assistance and patience. As I have stated many times on this site, dreams do come true if you pursue them. You must be prepared for some life experiences along the way, which may cause you some anxiety, but the end result is worth the effort.

Lesson learned…I would not recommend a road trip in the middle of a major winter storm. 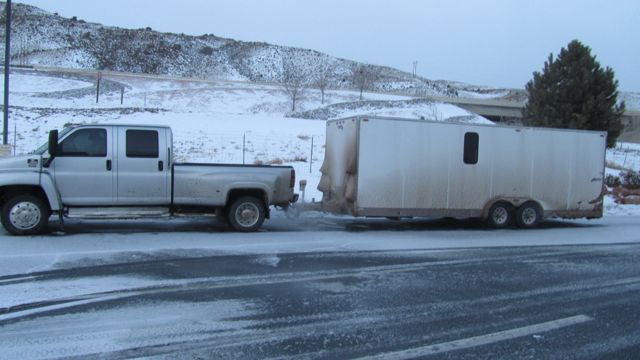 The weather and road conditions were terrible and the snow just kept coming down. The build up of ice around the wheels was heavy and we tried to knock it off at each fuel stop. The truck is a Chevy C-4500 with a Duramax Diesel and Allison transmission. The rig performed flawlessly until the electronics quit working. 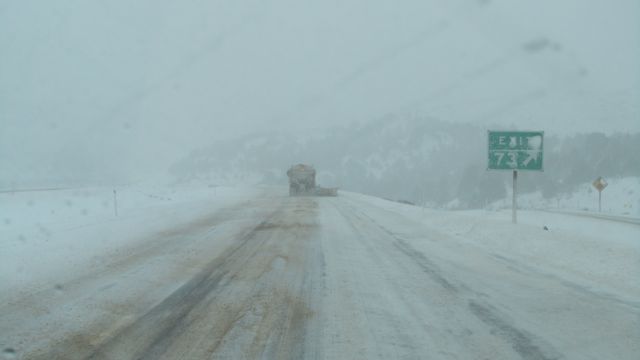 We were fortunate to be able to follow a snow plow truck for a long time which reduced my anxiety a great deal. Walt came up with and idea that could make us rich. Someone needs to develop signs that snow and ice won’t stick to. Most sign were covered over with snow and ice. 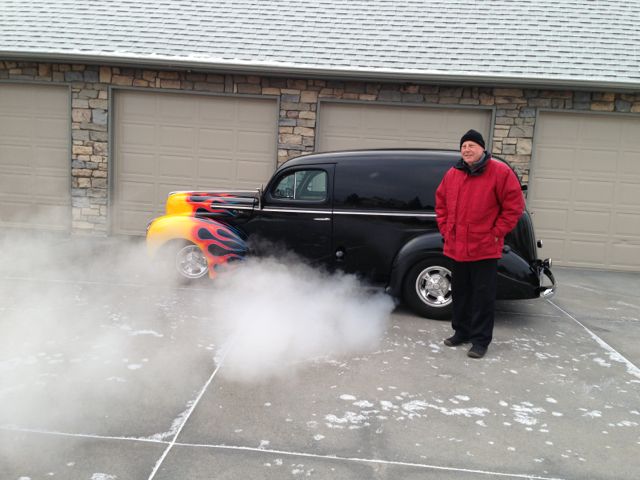 Terry was freezing but agreed to stop long enough to pose for this great photo. The engine is an Edelbrock Signature Series (#40) that Vic built for the car. The specs are 460 hp & 460 ft.lbs of torque. The lumpy cam really sounded great in the cold weather. 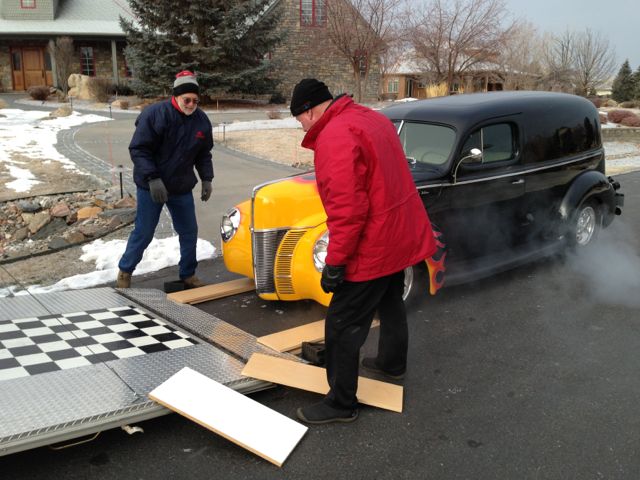 The car is really low in the front so we had to make some ramps out of some old shelves Terry had in his shop. Keep in mind the temperatures were near zero during this process. We had to service Walt’s fingers in a warm water solution so he could regain feeling in his hands. I will be installing the front bumper and raising the front end about an inch. 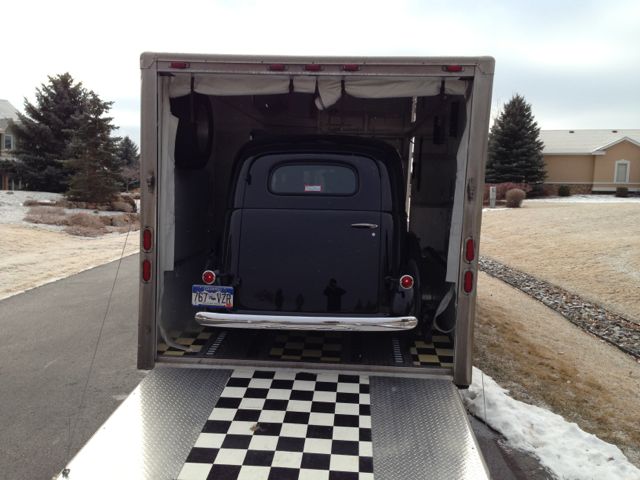 Terry drove the truck in the trailer and crawled out through the back door. I worried all the way home about the vehicle coming loose bouncing over some really rough roads but it did not move. Walt knows his stuff when it comes to securing a vehicle for the long haul. 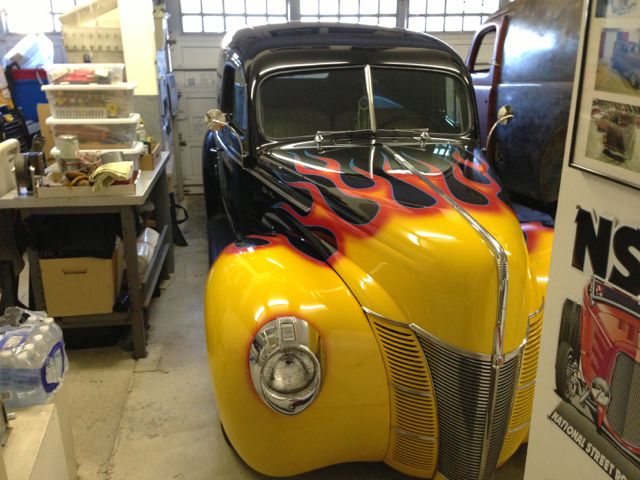 This morning I moved the delivery, Pepe’, in the garage next to Andre so he could see what a finished car looks like. He is jealous and wants to move. I will be putting him for adoption next week and you can see the specs under cars for sale. 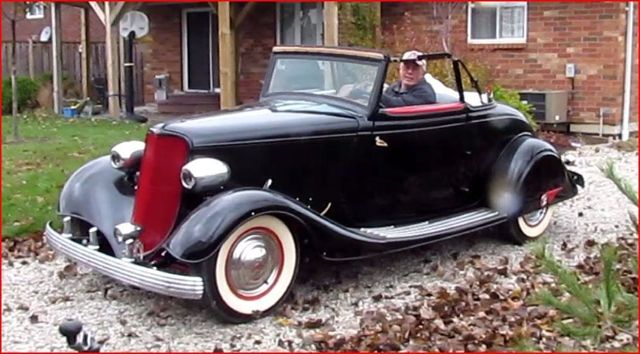 Started for the first time since 1969, John’s 33 Cabriolet is looking good. Again, dreams do come true. Congratulations John for finishing your long term project. Now for the 32 roadster project. 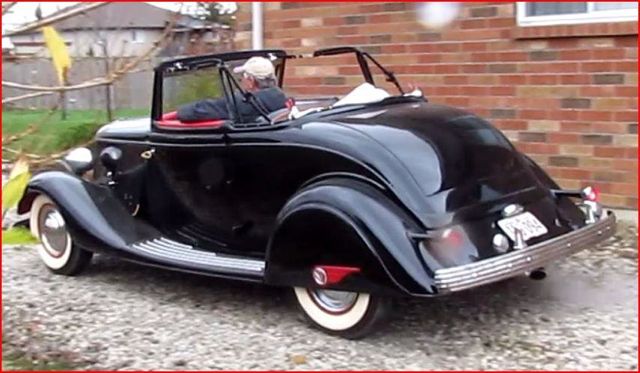 This is a life experience that you will remember for a long time. John has a large collection of rare parts as you can see in this photo.