I attended the GNRS this past weekend and had a wonderful time. Â Each year the show seems to attract higher quality cars and record crowds. Â I visited the show on Friday and Saturday and was hard pressed to see all of the cars both inside and outside. Â The weatherman cooperated and we were blessed with 75-80 degree weather the entire weekend.

The 80th anniversary of the Deuce was celebrated in style with more than a hundred Deuces inside and many more on the outside of Â building 9. Â I do not need to see anymore Deuces for a while. Â Bob Kolmos did an outstanding job of selecting the 80 Deuces and organizing the building. Â Friday was a great day for seeing all the Deuces but Saturday was really crowded with anxious spectators. Â I was walking along looking at the cars and ran into Jeff Beck, the guitarist, who purchased my 3 window in 1971. Â Jeff is a true Deuce guy and a hands on builder. Â He still has the Deuce along with many others. Â It was nice seeing him again after all these years.

The top 10 contenders were for the most part, very traditional styled cars. Â The winner was the hand built track roadster built by Jackie Howerton and finished by Bill Lindig. Â SO-CAL Shop completed the car and displayed it at the show. Â Roy Brizio also had a contender with his beautiful blue Deuce hiboy. Â Roy had seven cars in the show which says a lot for the ability of his shop to meet deadlines. Â Roy won an award for Eric Clapton’s 4 – door Deuce Victoria. Â You need to see the car in person to appreciated all the work that took place in the conversion. Â To me, the show was a very worthwhile event and for those of you who didn’t make it be sure to save the date for next year.

I want to thank Walt for including me in the Hall of Fame luncheon which was very interesting. Â Kevin, who owns my favorite Deuce sat at our table and joined into the conversation about his roadster that SO-CAL built for him a few years ago. 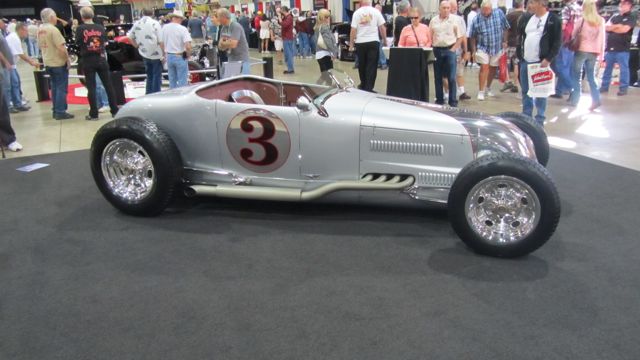 AMBR for 2012 was the Bill Lindig track roadster built by Jackie Howerton and completed by the SO-CAL team just in time for the show. Â I saw this car at Moal’s shop several years ago and wondered if it would every be completed. Â Only the best craftsman worked on this car and it really shows. 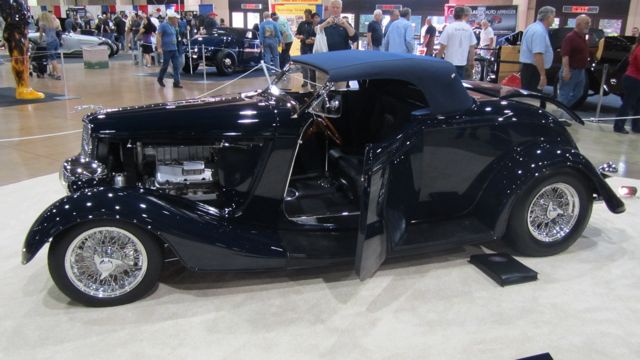 Dennis Varni’s roadster was my favorite. Â Dennis won the AMBR with his 29 roadster in the 80’s and was in contention again this year. Â Moal built and detailed to the maximum I fell in love all over again. 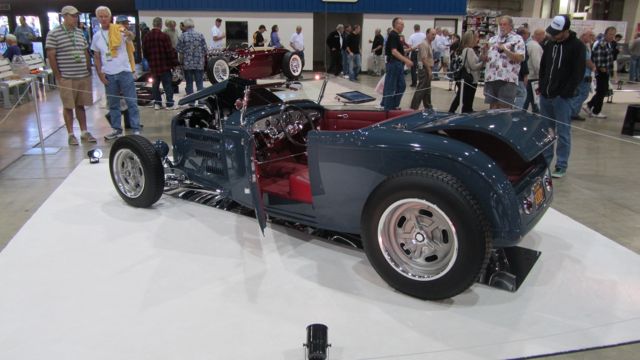 Brizio built this unique hiboy for Tom Gloy and was also in contention for the big award. Â Note the rear wheel wells have been eliminated and the car is channelled. Â I loved the color and detailing on this roadster. Roy and his crew have been very busy lately. Â See Roy website for the total build. 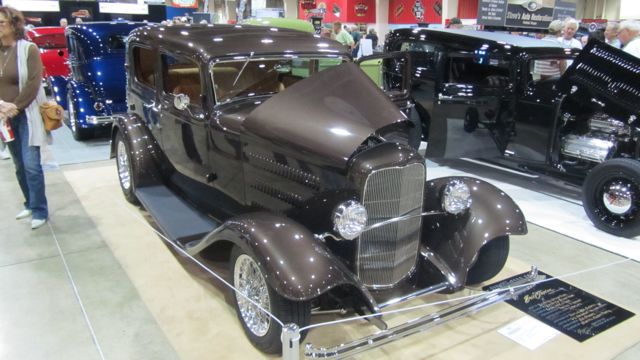 Roy also completed Eric Clapton’s 4 door vicky and won an award for his efforts. Â You need to see this one in person to realize the work that was done to provide a factory looking 4 door vicky. 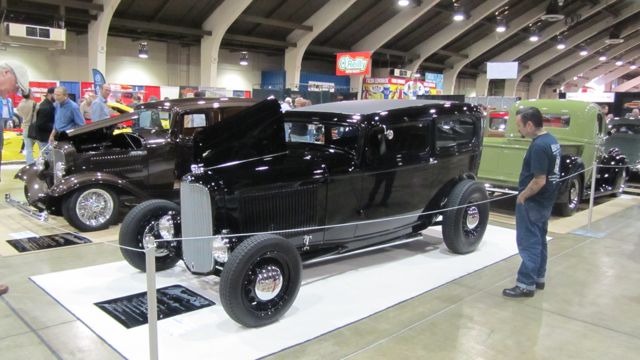 I spent a lot of time looking a Mariani’s just completed Deuce hiboy sedan. Â Roy did a marvelous job of keeping this one a period build with all the right parts. Â The car had an Auburn dash which is one of my favorite dashes in a Deuce. 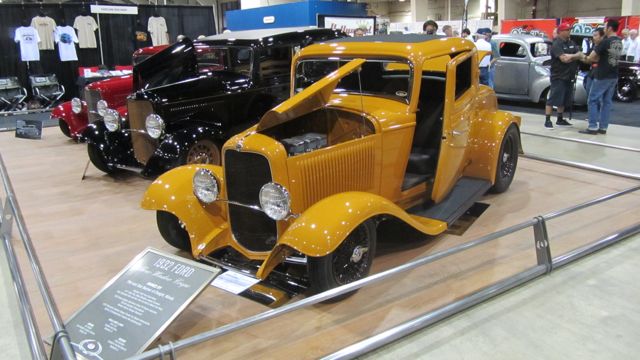 Fastlane was the featured builder this year and Phil Becker’s outstanding Deuce 3 window was in his booth. I have known Phil for over 30 years and it was good to see him again at the show. Â Dave Lane, the builder, is one of the top builders of traditional style cars. Â Congratulations to Dave and Phil for their combined efforts. Is the Vicky next? 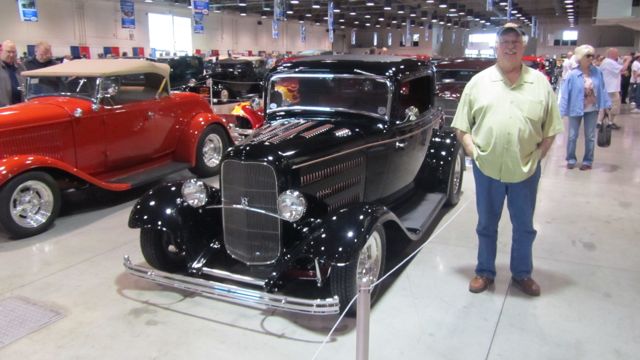 My friend Tom had two Deuces in the show. Â This is his freshly painted 3 window that was really shining under the lights. Â That proud smile is due to the fact that he had few days off to relax from his thriving restoration business. 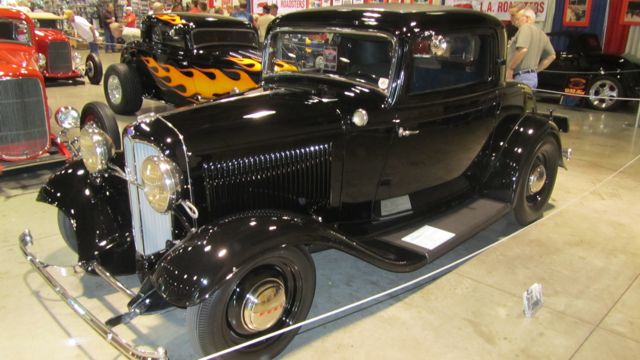 Dan, from Poor Boy Hot Rods had 3 Deuces in the show. Â This 3 window was flawless and very understated. All of Dan’s Deuces are first cabin and squeaky clean. Â You might remember his name from the Boyd TV series “American Hot Rod”. 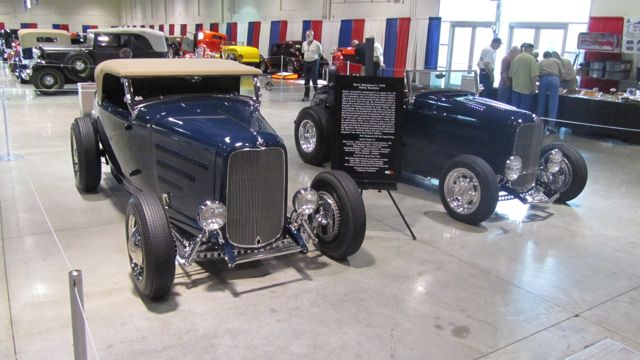 Kevin’s Deuce is high on my list of Deuce hiboy roadsters. Â The top, color and interior are very special on this car. Â SO-CAL always includes a very nice sign board detailing the build. 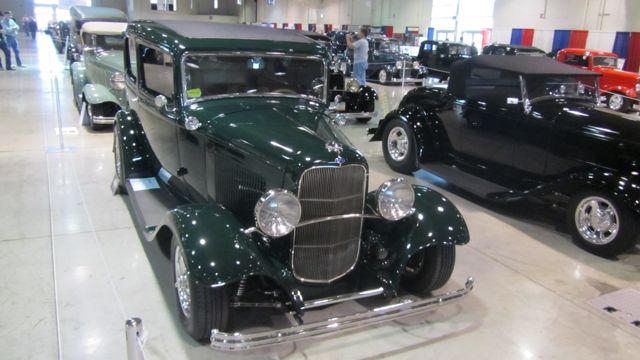 Another friend of mine, Gary from Sonoma, was selected to display his “Driven Deuce” in the 80th celebration. Â The BRG color is also one of my favorites on a sedan. 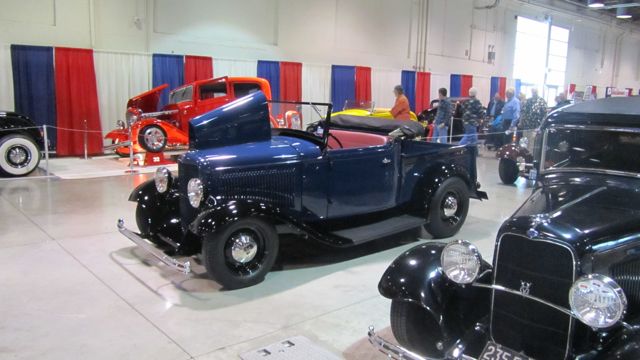 Bill Lindig also had a RPU on display in the Deuce parade in building 9. Â This is a SO-CAL built real deal and flawless. Â If you love Deuces building 9 was the place to be. 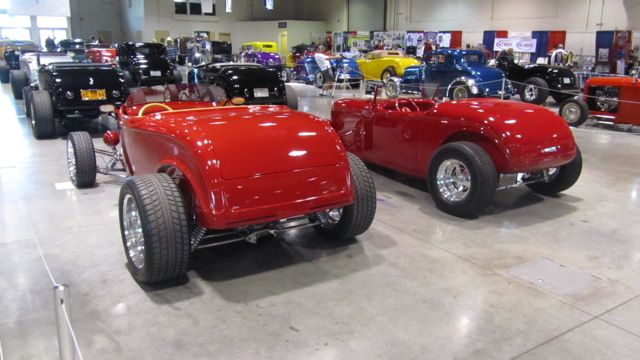 As a tribute to Boyd, Walt’s hand built aluminum Deuce was staged in the center of the display area. Â Craig Naff built this roadster while he was employed at Boyd’s in the middle 80’s. Â Walt’s car is on the right side of the photo and was highly detailed for the show. 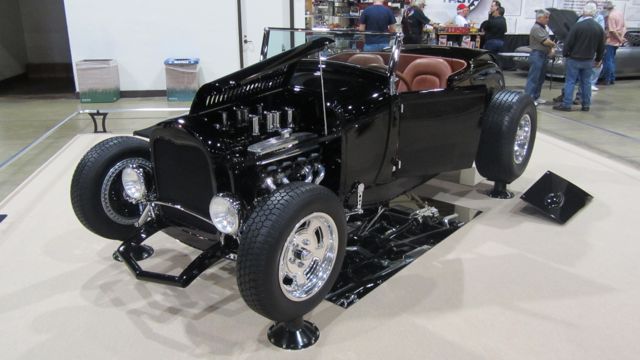 There were several 29’s in the show but this one really hit home with me. Â The Buick powered hiboy was in contention for the AMBR award in building 4. Â Everything was just right in my opinion.