The 68th GNRS had an interesting display of AMBR contenders this year. As you recall, the past couple of years winners have been very traditional builds, granted highly detailed, but followed the thinking of most of us older fellows. This was a unexpected change from past mega buck winners. This year’s contenders followed the same path with the exception of two highly stylish builds with HHR Packard being the center of attraction. The Mulholland Â exhibited high end styling, engineering, craftsmanship Â and overall execution. I have watched this build at HHR over the past several years and the end result is nothing short of spectacular. As I write this blog, I don’t know who will be awarded the AMBR trophy but I’m sure the builders of these creations will unlikely create another Picasso and chase the award if it doesn’t win. Then again, financial means to satisfy dreams, ego and artistic talent will always be available to those who only create for their own personal gratification. I admire that person and love to see these art masterpieces at the shows.

As for the remaining eleven contenders, they followed the traditional line and were fine examples of early and late roadsters being built today. Some were just placed on the floor without exotic displays or fan fare. Others were build around a theme display with some show car flare which is what I grew up with. Angel hair was not present in any I saw but would have been welcomed by me. Several Black Deuce roadsters were in contention with various drivetrains and both early and current trends incorporated in the build. The Stanley Wanlass windshield is popular with many today as were a few with the Duvall windshield style. These roadsters could be driven to your local drive in and fit right in with the crowd and many will do that after the show. I like that!Â My hat is off to those who continue to invest time and money into building a contender for the AMBR, after all, there have always been controversial winners over the 68 years and has not stopped those who can â€” from building their contender. I hope that continues for many years to come.

The day passed by quickly and the old feet and back were put to the test of endurance for something I dearly love. As always, the display of quality Hot Rods was present in the Roy Brizio booth. He had some outstanding Hot Rods that could have been in contention but weren’t included by choice. Â Other notable builders had some outstanding builds in building four as well as other buildings. The quality of the Suede Palace builds has improved over the years and many were displayed in paint and upholstery with shiny chrome on the suspensions. Woodies were present and well as motorcycles, customs and race cars like George Poteets record holder. The show had something for every taste and was well organized both inside and out. I congratulate John Buck and his staff or another outstanding 68th Annual Grand National Roadster Show. I will be back next year. 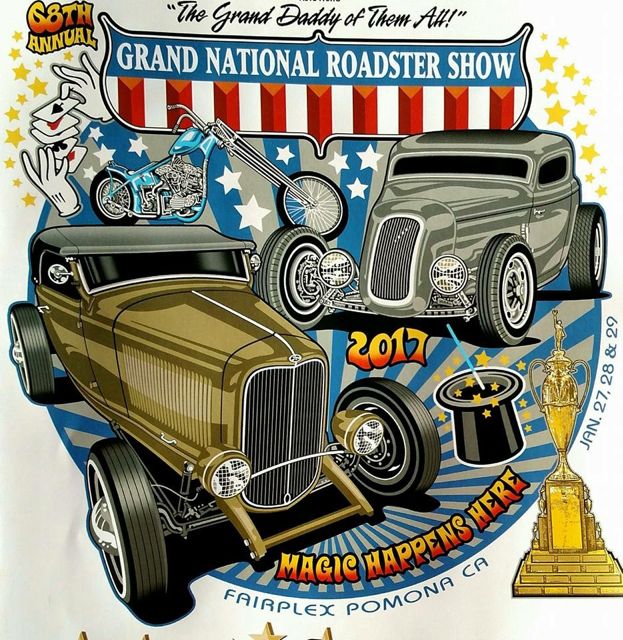 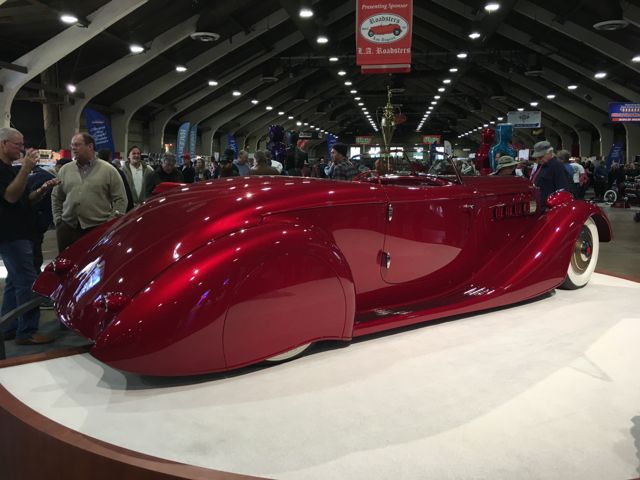 Congratulations to HHR for their execution of the Mulholland a seven year work of art. 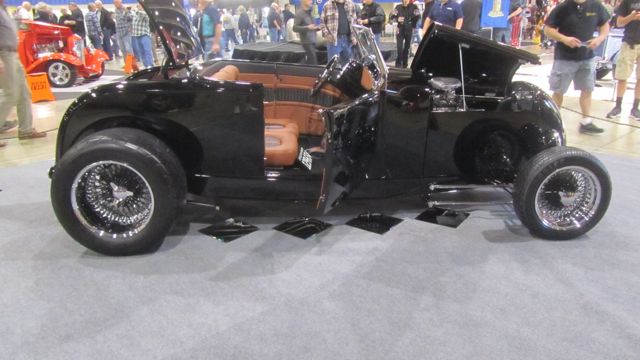 A track nose 29 was in the flock chasing the AMBR trophy. 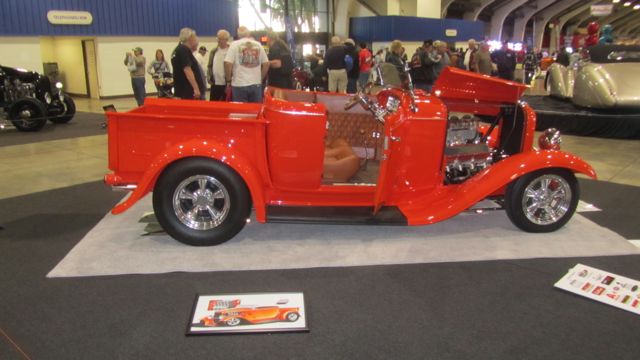 The RPU had some nice features also and a simple display. 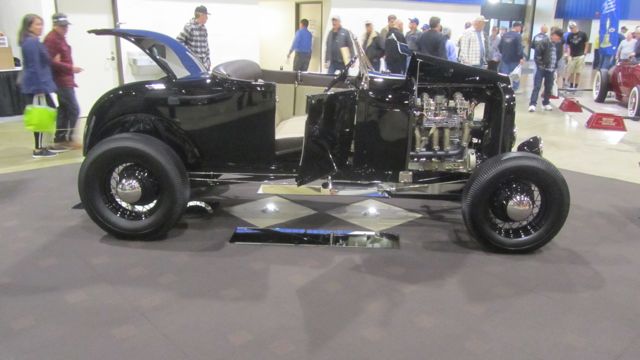 Stoker’s had a very nice 29 in contention and attracted lots of attention from the old-timers. 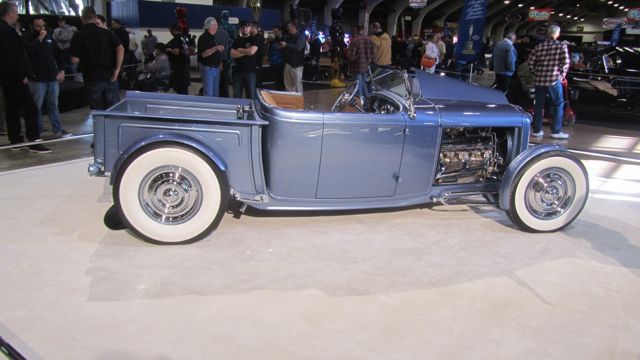 Our group liked this RPU with some nice detailing and beautiful display. 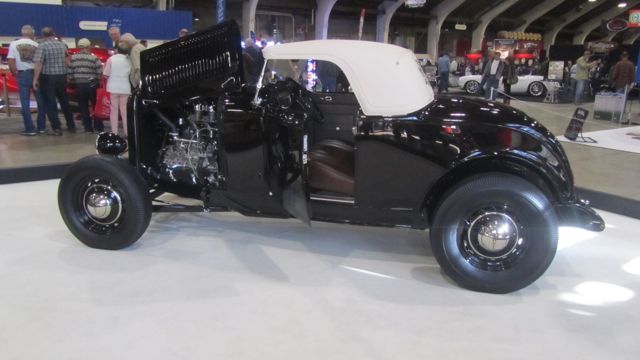 I liked the Carson style top on this contender. 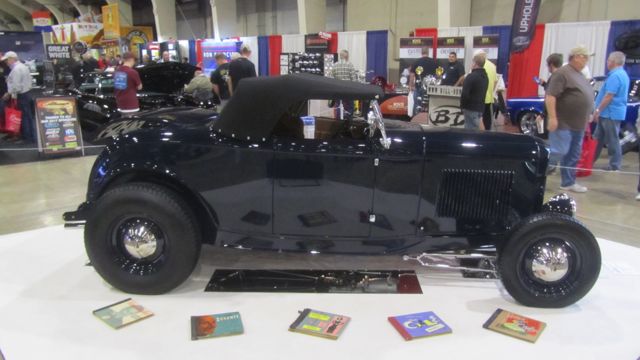 Scott has his roadster in the center of building four and it looked great. Hollenbeck Washington Blue paint stood out. 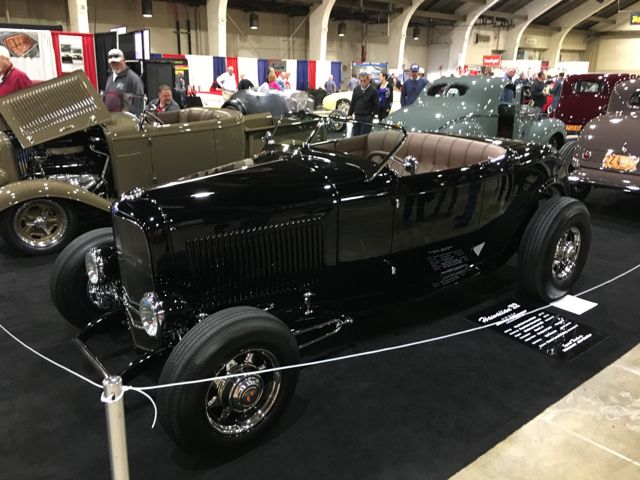 Roy had a couple roadsters not in contention but could have been. I loved both of them. 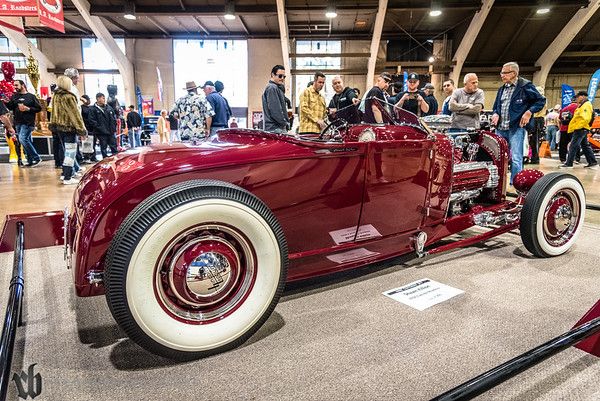 This slick 50 was in contention and very nice. John picked it to win. 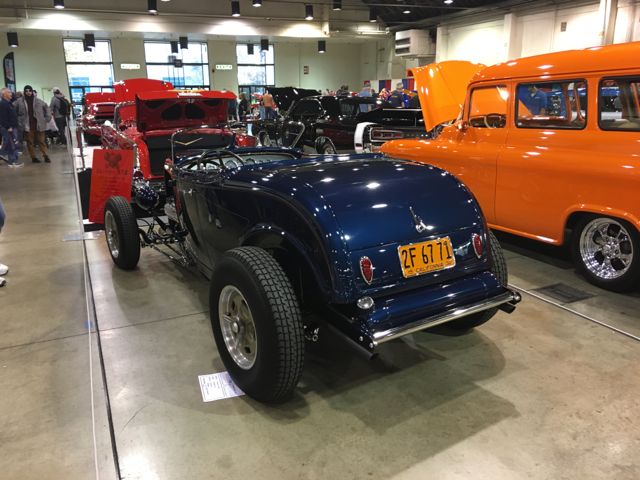 A cutie in another building could have been a contender in my mind. 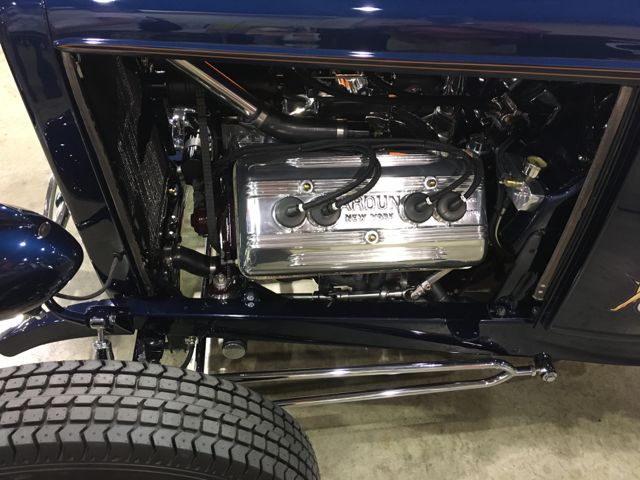 The Ardun heads stopped and made most take a second look at this nice Deuce roadster. 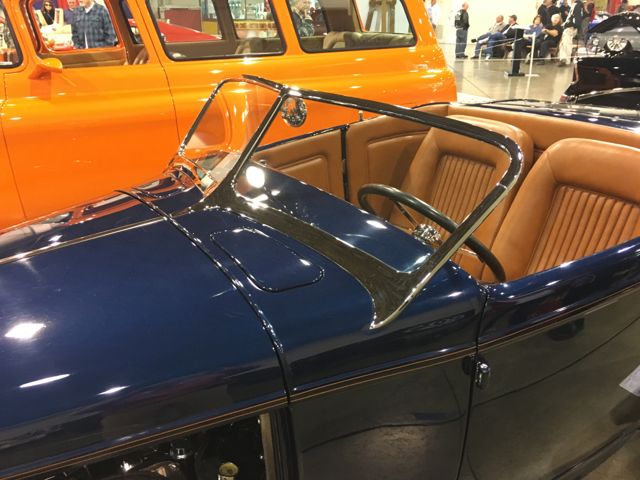 The added dual cowl vents with the Duvall is a Moal feature on his builds. 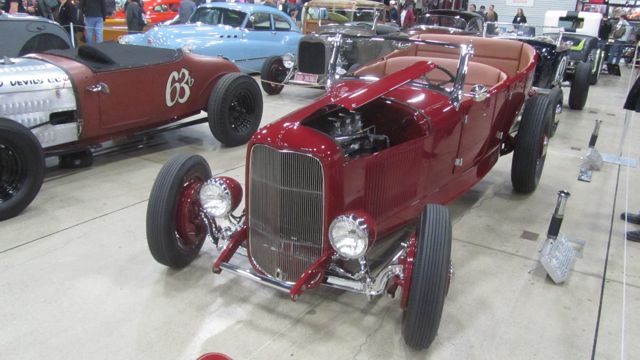 Everyone liked this T-Tub with lots of details and perfect paint. 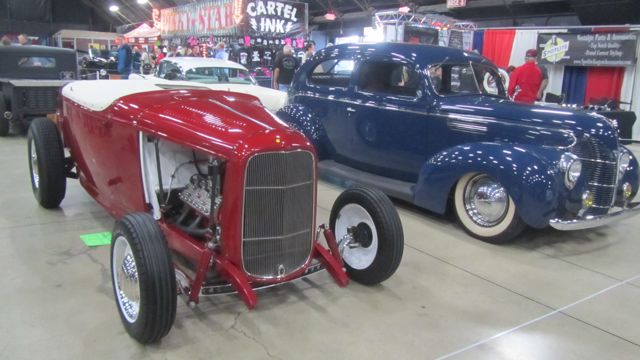 I liked this Deuce with the Salt look and tonneau cover. 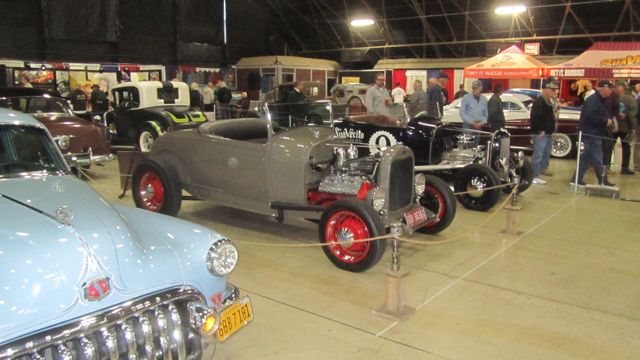 There were several 29 roadsters on display and most were finished in paint and upholstery. 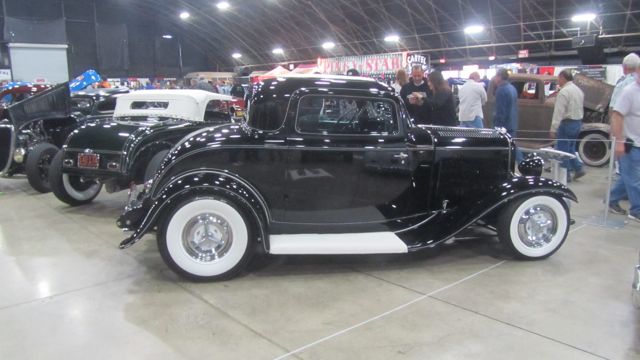 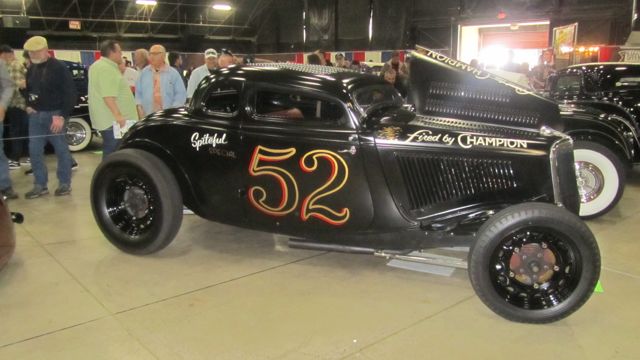 The chopped 5-window with lots of louvers had the racer look. 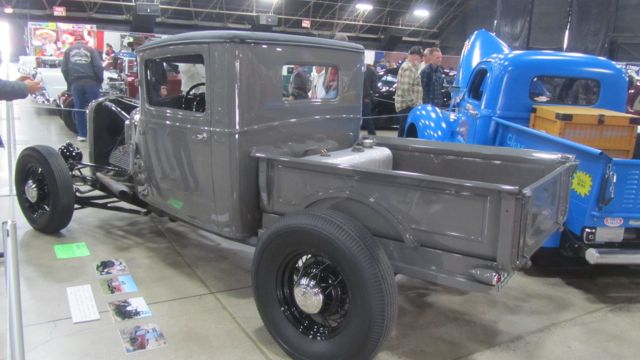 Plain but very eye catching was this Model-A Truck hiboy. 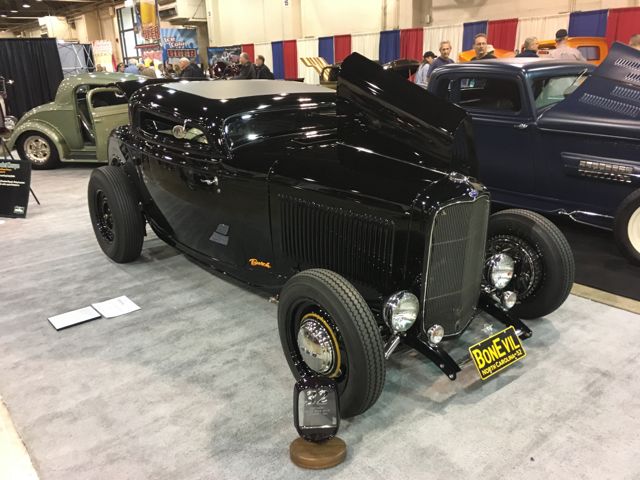 A heavy hammered Deuce coupe was standing tall and had some history on the salt. 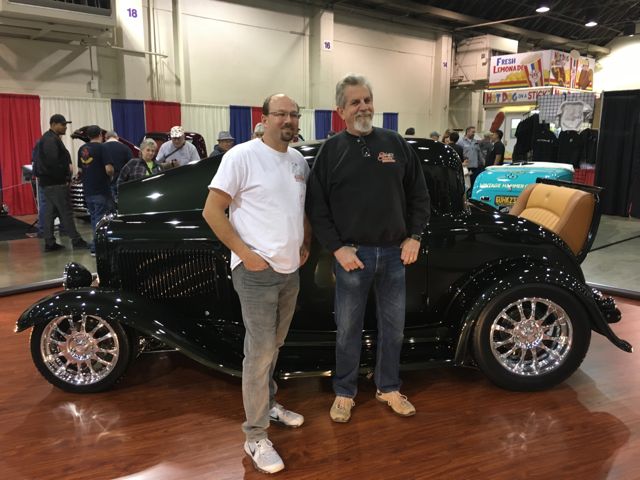 Sid (upholster) and builder (L) had a beautiful Deuce coupe that I featured in bare metal in the past. 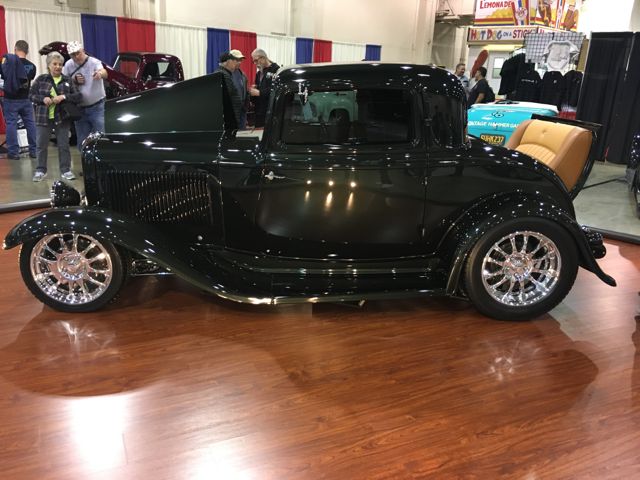 You can see how well the car turned out in this photo. 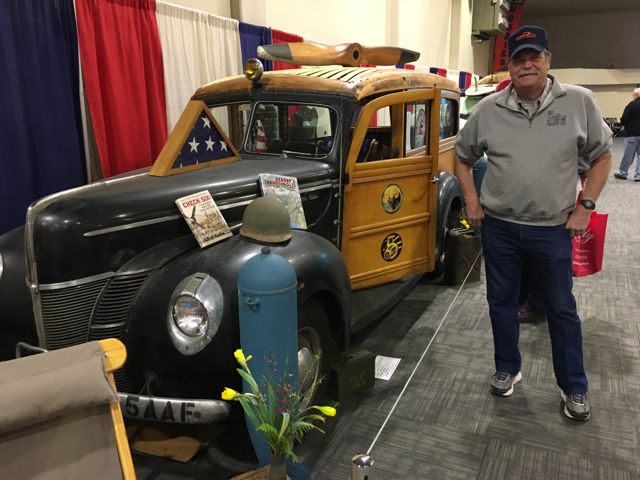 My friend George just had to stop and look at this 40 Woodie. He is a now a 40 Woodie owner. 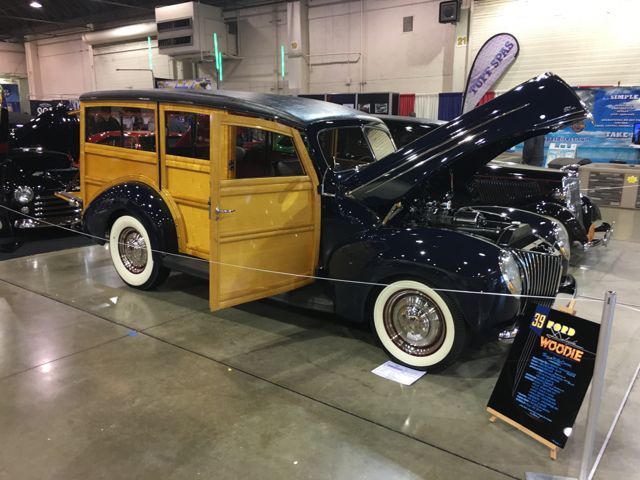 We also looked this 39 Woodie over as it had Tiger wood in the main moldings. 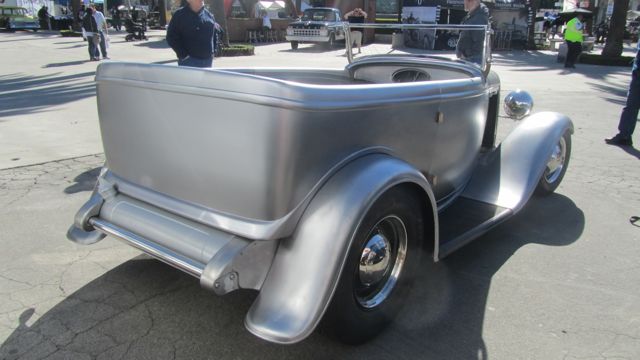 Brookville, a major sponsor, had their limited edition phaeton on display. Seven of the 32 being built have been sold. 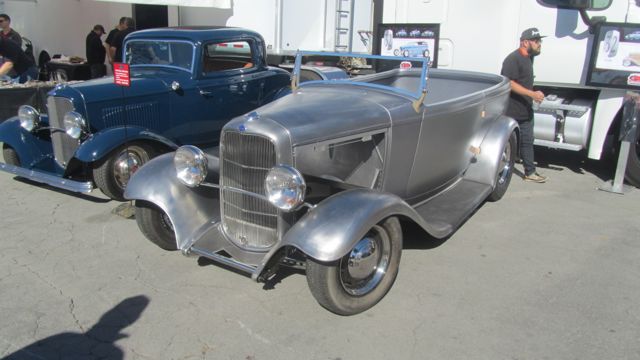 The fenders have been added since I last featured this body. I am eager to see the finished build. The door looks really long in this body. 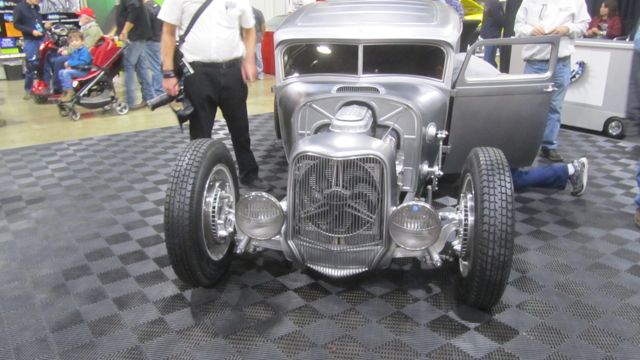 Rad Rides by Troy had Marina’s sedan on display showing a multitude of modifications and unique styling. 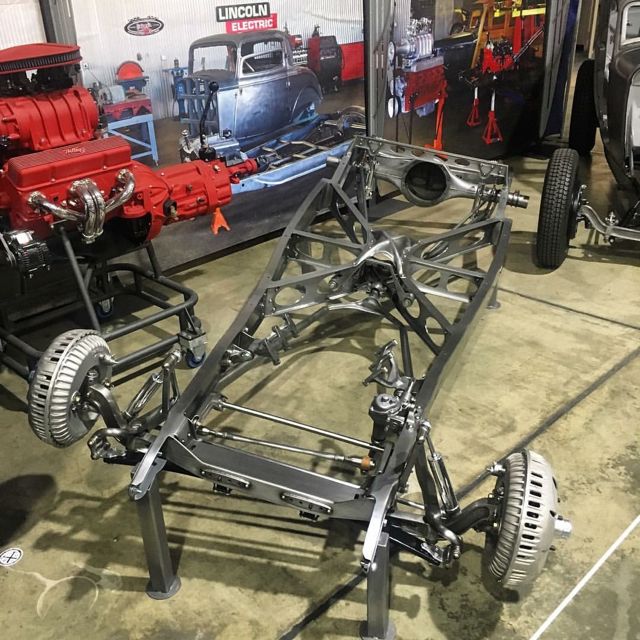 Walden had a 34 chassis that belongs in the Smithsonian. Intricate fabrication, engineering and design made this my favorite 34 chassis. Kinmont style brakes from our local manufacture were looking great. 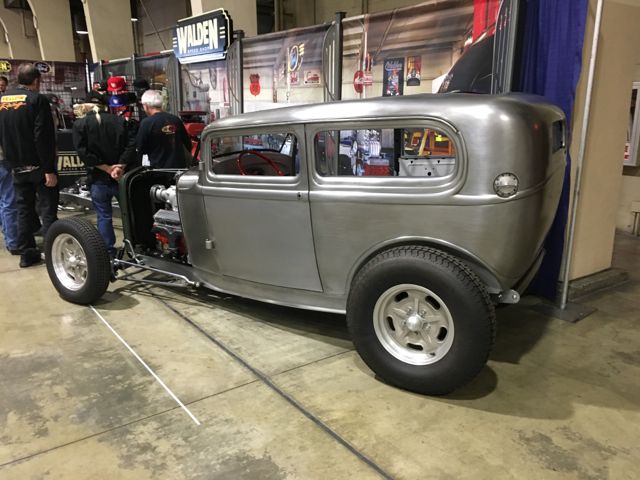 A perfect metal finished Deuce sedan was part of the Walden display also.