The winner of the 2014 GNRS will be surprise to me as I still don’t know. Â Our group looked at all ten entrants and each picked a different car. I personally felt this year’s crop was really oriented toward the simpler roadster with emphasis on style and detail rather than bling and big budgets. I really didn’t fall in love with any particular roadster except for Paul’s Deuce Phaeton. He added fenders this year and while I am a hiboy fan, I do think he improved the overall look of this rare Phaeton. Building 4 was where we spent most of our time and met several of our old friends and made some new ones. If you stand around a Deuce or Forty long enough you will meet almost everyone who shares your passion for the two breeds. Roy’s display of cars was larger than most years and he had some of the nicest quality cars in the show. Scott’s 3 window, John’s 33 four-door Victoria, a beautiful Deuce panel and the list goes on. Each car required a conversation about the style, interior and overall presentation on the show floor. Bruce’s 33 Phaeton was also high on my list of favorites.

Wes Rydell’s, Chip Foose concept and Troy’s execution of the unique rare Chevrolet Phaeton that wowed the crowds. Wes is a long time Chevrolet dealer, drag racer, show car winner and all-around nice guy. Â Congratulations Wes on your win. You have both the big ones now.

Other major builders such as JHRS, Pinkees, SAR and HHR also had very nice cars and new innovative products on display. The quality of workmanship from these shops just keep raising the bar for others to seek. Walden Speed Shop also had some of their innovate chassis work and metal magic on display. His metal work and finishing are about a nice as I have ever seen. Brookville and United Pacific Industries had the 3 window and 5 window Deuces on every isle in various forms. Many of them were chopped Â and ready to go. You needed deep pockets to purchase but the quality was evident in each body. I believe you will see many more of these finished cars at next year’s show.

The remaining buildings were packed with quality cars and vendors. We enjoyed touring Building 9 where the Century of Bonneville Salt Flat Racing was the theme this year (Each year a different theme is in Building 9). We wondered what went on in Bonneville in 1914 and soon were informed that a Mercedes Benz named Blitzen-Benz ran a 300 hp car that turned 142.73 mph for the mile record. The actual car was on display and had a large crowd around it all day. My friends purchased a wonderful book for me entitled, “Bonneville A Century of Speed” which I would recommend purchasing if you love Salt racing.

The day went by too quickly and we ran out of time to visit all the buildings but had a wonderful day enjoying the cars, people and the crowds at the Â 65th GNRS. This is the 10th year the show has been in Pomona. 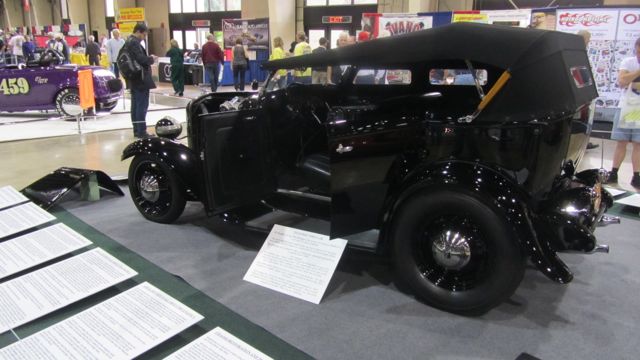 Paul’s Deuce Phaeton was my choice for the big award. He added the fenders for a new look this year. 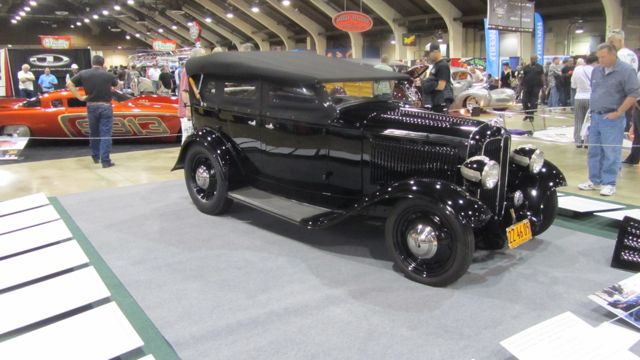 He left the doors closed and the side curtains on for a different view of his beautiful Phaeton. 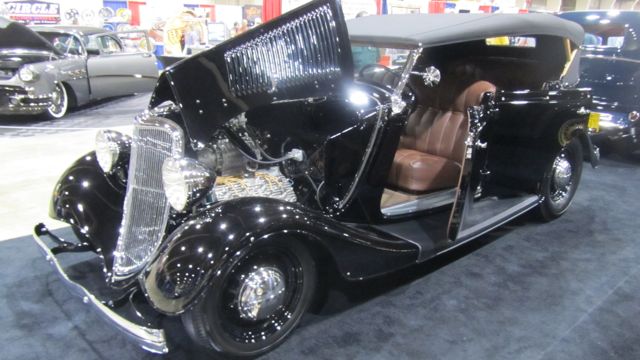 Roy built this 33 Phaeton for Bruce and I really like the simple approach to a basic early Phaeton. It seemed Phaetons were the hot models this year and that is a good idea in my mind. Brookville said they are not into building phaetons yetâ€¦maybe this will change their mind. 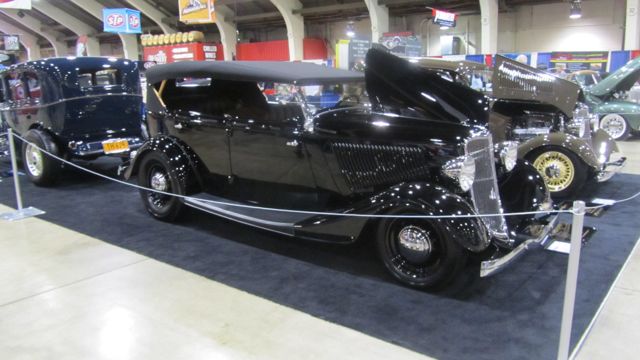 I spent a lot of time looking at Bruce’s car as many little details were incorporated into the build such as a 2″ chopped top. 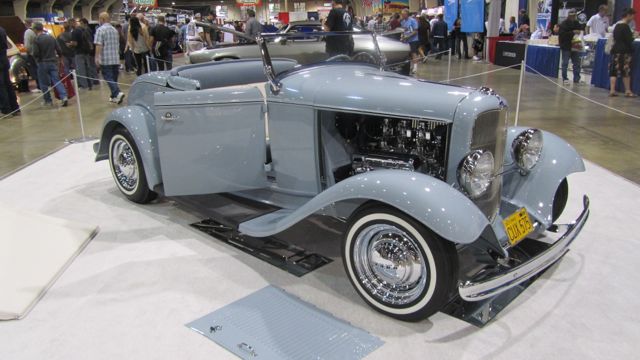 Terry built this early looking roadster for a customer and the end result was well received at the show. Lots of detail and old school items were built into the overall design. 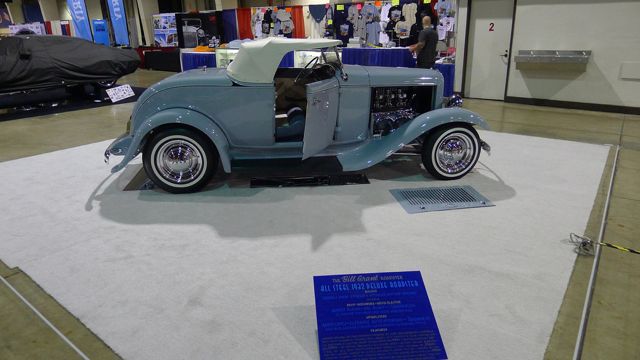 I didn’t read the sign but I did like the top profile and the early theme of the car. 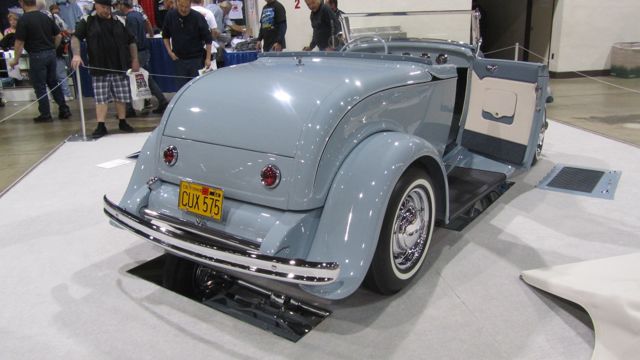 You can see all of the chrome plating in this photo. The color was unique and quite different. I liked it a lot. 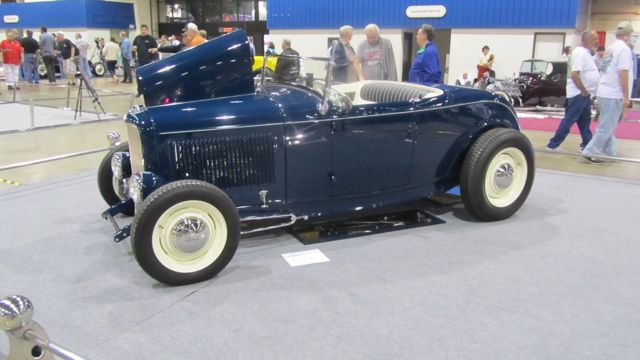 Your basic hiboy was done up nicely and was a contender along with several other Deuces. 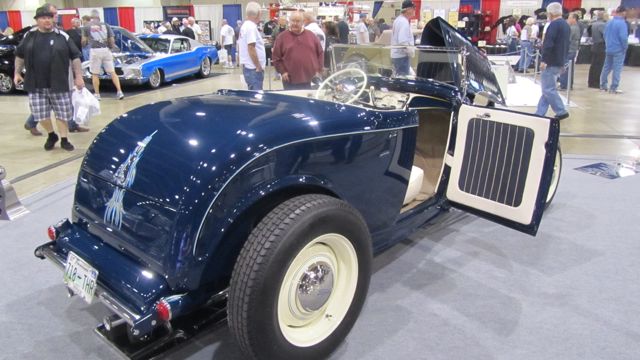 I am not a judge but after looking at the Deuce hiboys in the show I would think many of them could have been in contention but were not considered for the Top Ten. Perhaps they should do as the Detroit Autorama does and select the Top Ten from the entire entries. The suspense would be greater and offer more opportunities for promotion in future years. 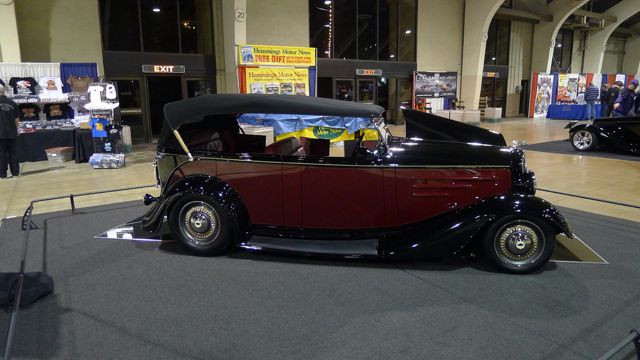 Wes’s 35 Chevrolet Phaeton was and outstanding vehicle and quite different from the others. Again, a Phaeton is a classy car to begin with in any form and were enjoyed by the wealthy families as touring cars. Winner of the AMBR 2014 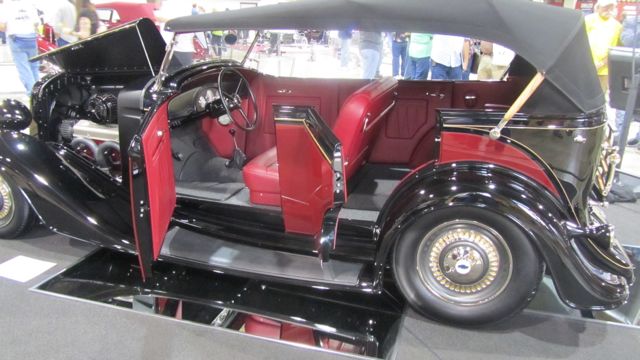 A well thought out interior and paint scheme added to the beauty of the Chevrolet Phaeton. 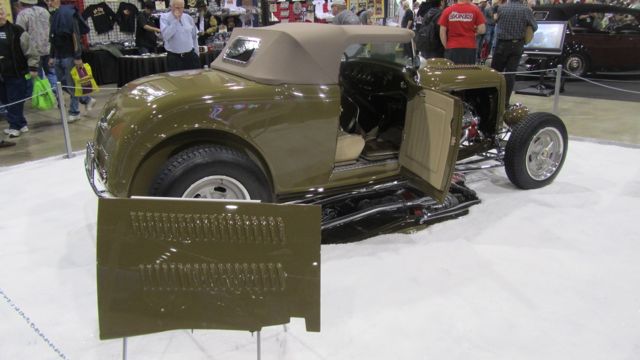 Another one off roadster was this one. I loved the color and flathead mill in a more modern theme. 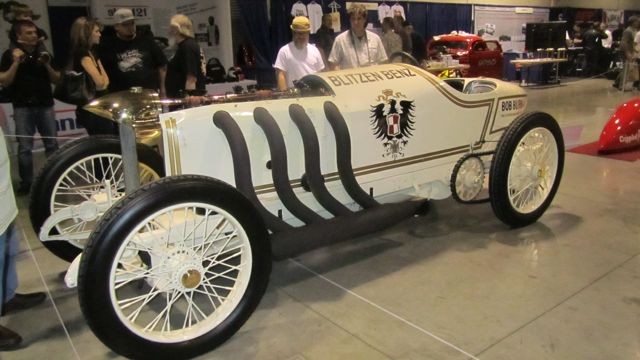 Now you can say you saw the first mile record holder at Bonneville which was in 1914. The car was magnificent. 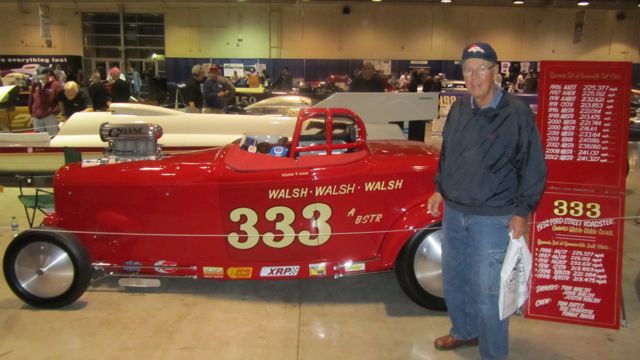 Here I am in front of my friend Tom’s record holder Deuce roadster. He has owned the cars for many years and keeps the car in top condition both mechanically and appearance wise. I am tired as it is late in the evening when we got to building 9. 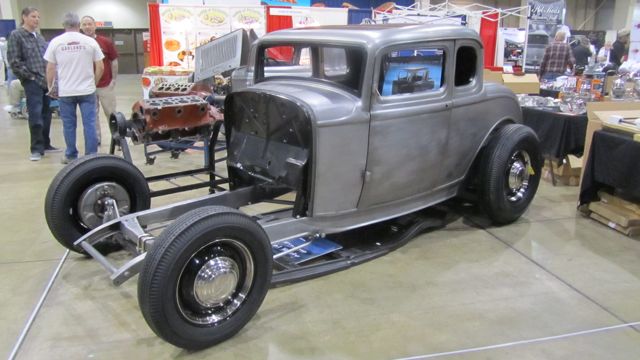 A middy chopped UPI coupe was available for $27K (body only). I like the mild chop on these models. 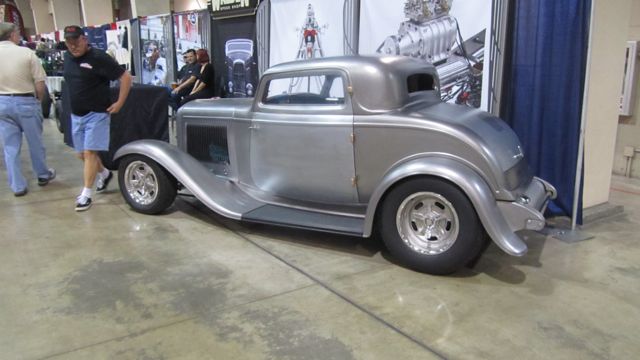 Walden showcased his Deuce with a full rendered model this year. 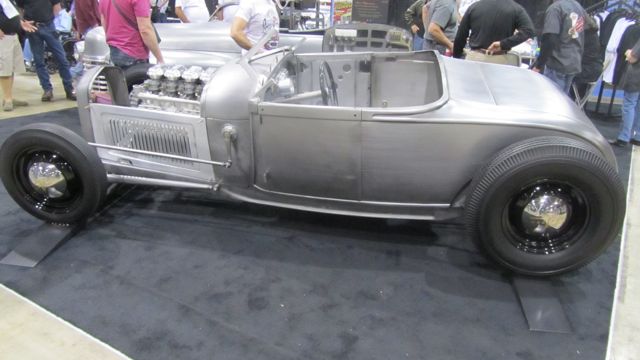 Eric had a nice 29 going together in his booth. He also does perfect metal work and fabrication for his customers. Eighteen inch rear tires are popular Cory. Now we need some steel wheels readily available. 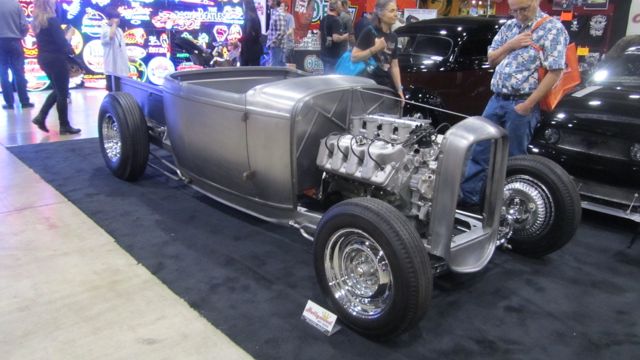 HHR had a RPU on display with the Big Ford motor. Maybe they are the Boss. 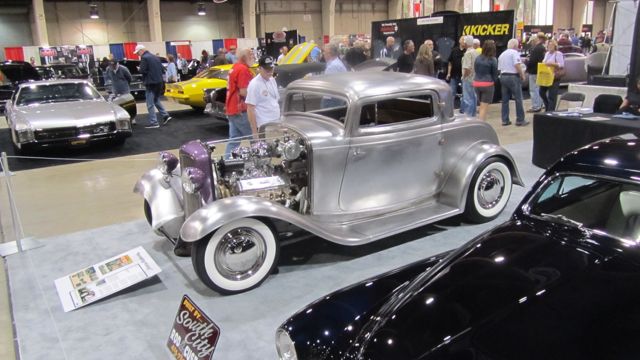 A former R&C car was on display in bare metal and had vent windows installed in the 50’s.

Scott had two entires in the show and both were outstanding examples of early coupes. Metalwork was perfect as was the theme. Note the big rear wheels and tires. I believe Rudy and SFSS worked on the car. The gas tank was copper colored which is a first for me.