I was sitting in my favorite chair when the phone rang. I noticed it was Bob-O so I answered the phone and he advised me that Dave, from Australia, was in town. He had called and invited us to have lunch at Galpin Ford and tour their automotive collection. I could hardly say no as Galpin is the largest Ford dealer in the world and his grandson is an avid car collector. I should remind you that Dave purchased Bob-O’s 40 coupe a couple of years ago and was in the US to attend the LSRU with Lucky of Old Crow Speed Shop fame. (He now has his own shop) Bob-O wanted to drive his 40 sedan to show Dave so after a long coffee break at the “Office” we headed to Van Nuys.

We arrived and parked in front of the Horseless Carriage restaurant which is located in the dealership. Bob-O knows everyone in the joint so we had a private parking place and a great booth by the door. Dave and Lucky arrived and we discussed the Roundup and enjoyed a fabulous meal. Lucky and Bob were able to arrange for the tour which is located in a building a short distance from the restaurant. When we walked outside their were a few people looking at the old Ford parked in front of the world’s largest Ford dealer. Most people who love these cars have gray hair but some of the younger fellows like Dave also love the old Fords. After doing a complete walk-around sales pitch we drove to the Collection with Dave in the back seat. He is wanting a family car and this one would be perfect. He sat in the back seat and was amazed at the amount of room in a 40 Ford sedan. I think he is hooked.

We were admitted to the vehicle display by our tour guide and spent the next couple of hours viewing and listening to the history of each car. The curator was very knowledgeable about each car. The cars range from rare Cobra’s, Mustangs, Roth built specials and a host of hot rods. My favorite was the Bill Likes 29 highboy roadster (Edelbrock Special) that is fully restored and in primo condition. The car was purchased with a complete collection of invoices, speed tags and loads of documents outlining the history of the car. Bill was an employee of Edelbrock and set lots of records with the car. Lucky ask if we would like to see another car that he chopped for the owner. We jumped at the chance even though we had already spent too much time looking at cars.

The award winning 5 window was stored in another workshop located a few blocks down the road. We enjoyed looking at this wonderful 60’s style 34 five window coupe with lots of show car touches including a plexiglass side panel hood. The car placed in the top 10 at the Detroit Autorama this year. Finally, we thanked our host for the tour, jumped in the 40 sedan and headed home on the busy freeway.

I would like to thank Dave, Lucky and Bob-O for inviting me and making the day one to remember. 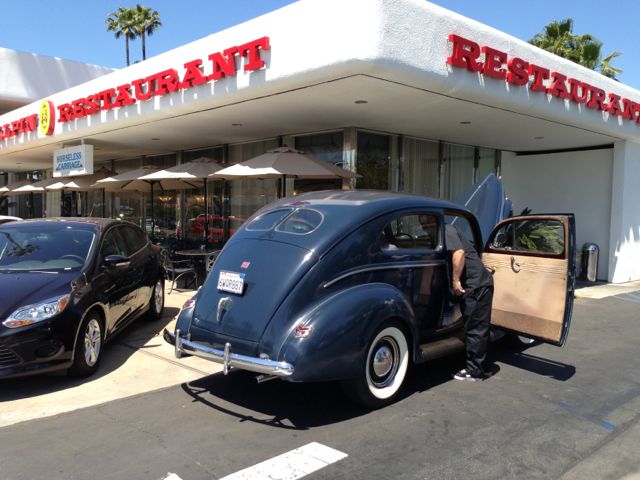 Lucky is checking out the sedan outside the restaurant located in the dealership. The patina sedan would look good in Australia. 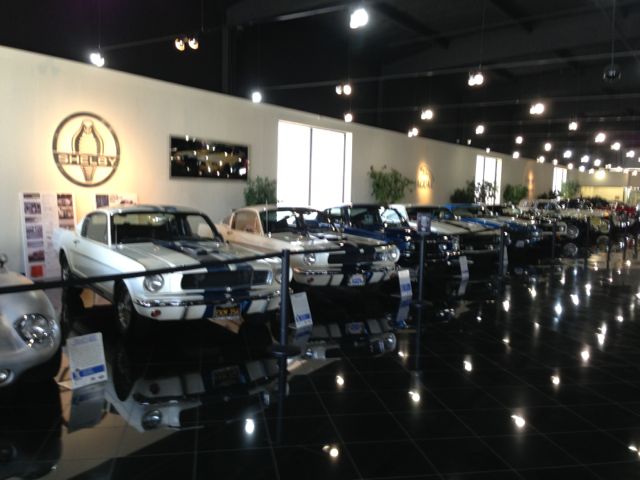 My iPhone photos are not the best but you can see the quality of the collection. The 65 Shelby Mustang is #1 and was purchased at BJ for 375K. Nice! 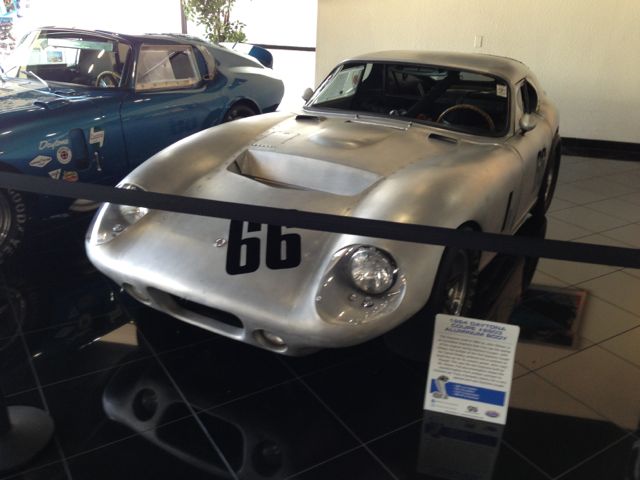 This is an original 1964 Daytona coupe from the famous builder. The blue one is a clone built on the same jigs. 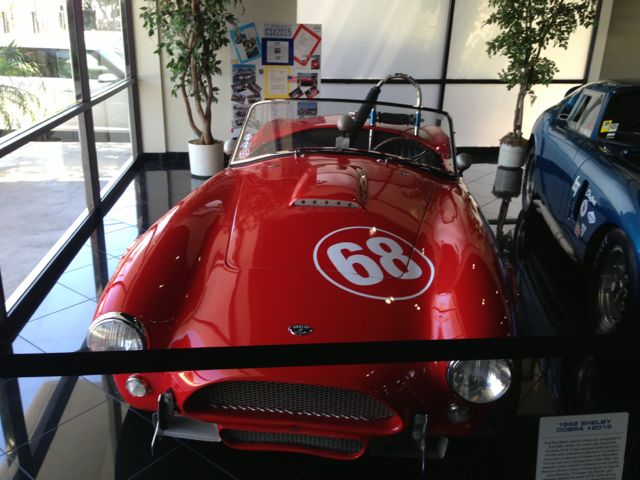 A pristine example of an early Cobra fully restored. Some race history and documented makes this a valuable car. 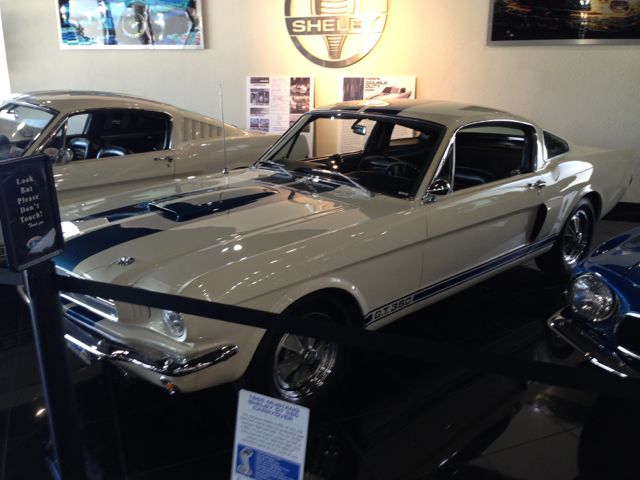 Here is a 66 Shelby with the side scoops and rear side windows. 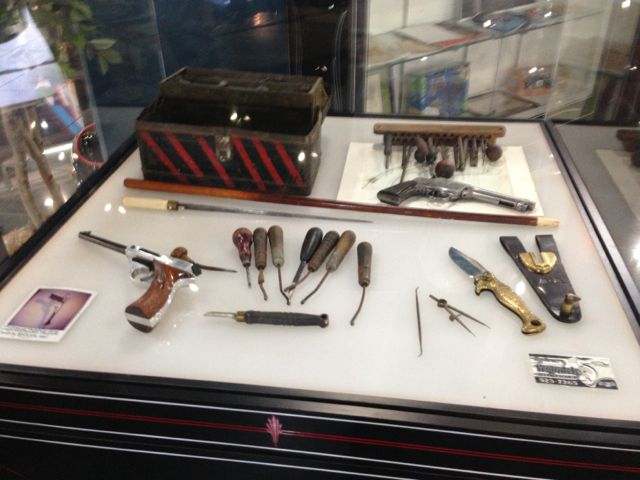 The Collection includes a display of Von Dutch knives and guns he was famous for. 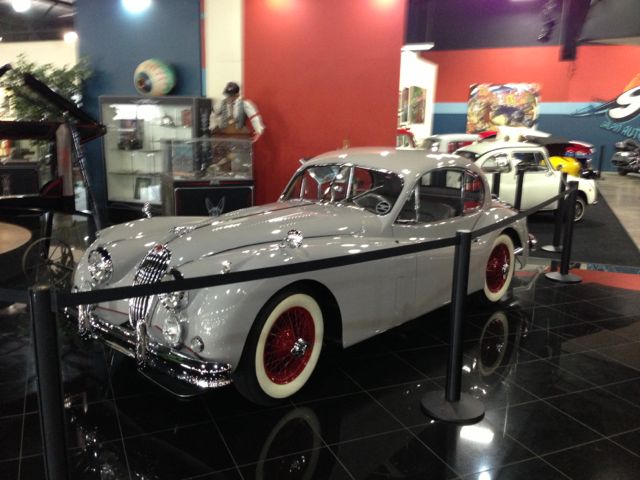 Von Dutch once owned this XK140 Jaguar with his touches apparent all over the car. 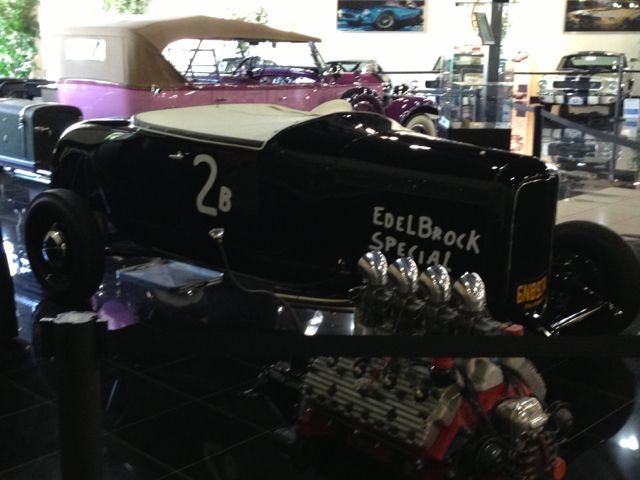 Bill Likes 29 roadster was my favorite car. The display included all the history memorabilia Â he had kept while he owned the car including and extra engine and transmission. 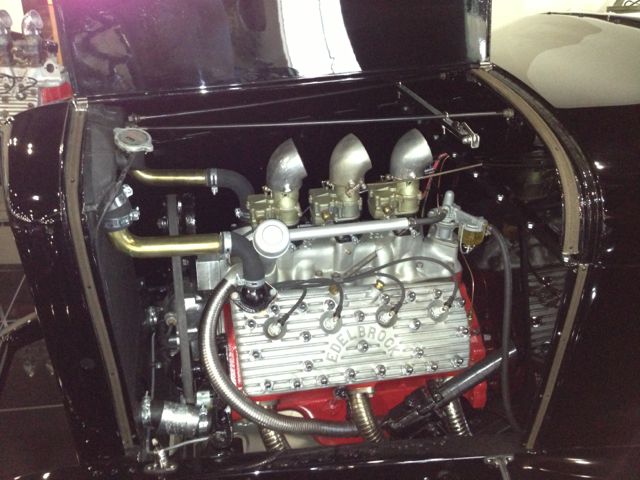 The engine was period correct including the flex pipe headers. I saw timing tags that were in excess of 140 mph. 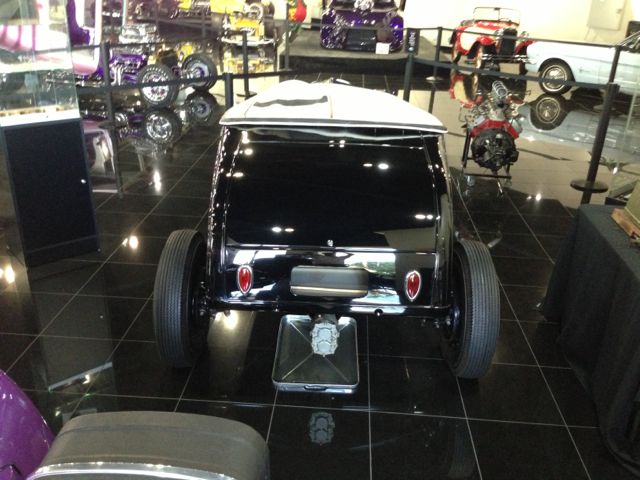 The Halibrand was standard equipment on all quality racers of the day. There is no substitute for the Halibrand in my mind for an early build. 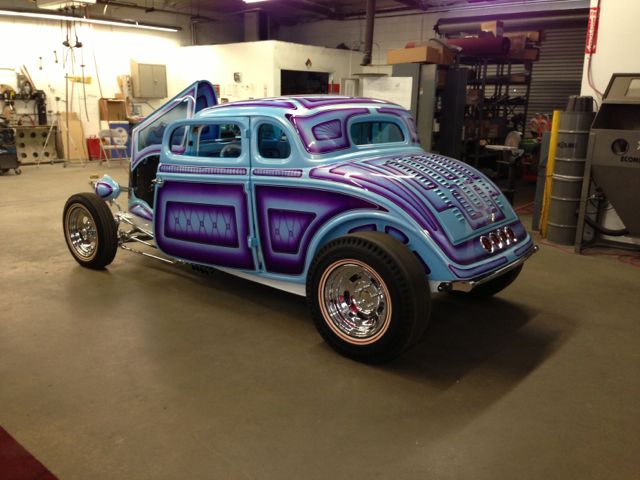 Untold hours and dollars were spent on building this very detailed 60’s style show car. Modifications were everywhere along with extensive chrome plating that exceeded $100K. 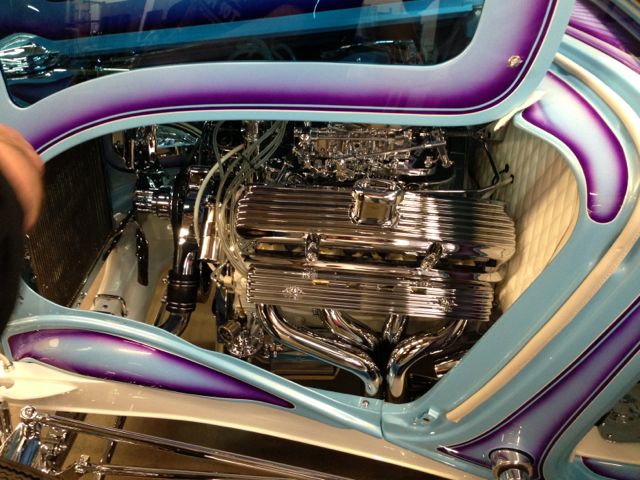 I thought it was 1962 again when I saw the upholstered firewall. Everything is chromed including the radiator. Advanced plating did all of the outstanding chrome work.