The “Office” is full of conversation each day of the week by our staff members. Sometimes stories lead to a direct path to very nice cars. Most stories we have all heard before but once in a while one produces results. Take for example, the rumored Deuce sedan that was stored in the Valley for over 50 years and was finally available. The story was told for over a month or so but nothing ever surfaced about where the car was located. That all changed when my friend Bob-O called and asked if I would like to go and inspect the rumored Deuce sedan (four door) and, of course, I jumped at the opportunity to look at any Deuce that was for sale. We drove through evening rush hour traffic and arrived at the secret hideout of the fabled sedan. The car was behind high gates and covered with tarps. It had just been pulled from the long storage and brought to this location for viewing. Once the cover was removed and the original black paint gleamed in the dusk, we knew this was the one. The car is complete except for bumpers (can’t find them) and is absolutely rust free with a minor dent in the rear bustle. Granted, the car has two too many doors, but it is still a Deuce with all the goodies that go with the brand.

Negotiations began and before long a deal was struck and we were on our way back home dreaming of what to do with the find. It seems like we were not the first to view the sedan but were in line to make a bid and get in line. The age old process of buying old Fords is almost like buying a house in CA. You may have to bid over asking price to get the item. I know this sounds crazy but Deuces are still in demand and if you don’t step up, they will be gone before you get a second look. We should know tomorrow if Bob-O was high bidder but in the meantime he can dream about mor-door hot rods. While they are not for everyone, they do make very nice rides with easy access to the rear seat….to be continued.

Pepe is running good but I still have some doubts about our repair so more investigation is due prior to leaving on a long trip. I at least know how to get it started with the jumper wire in case it does fail again. Donnie has new brake pads which he will install next week and the squealing will go away. My wife hears real well and I don’t so I need to fix the problem to keep the wife happy. Remember….”A happy wife is a happy life.”

See you in Santa Barbara on Saturday. 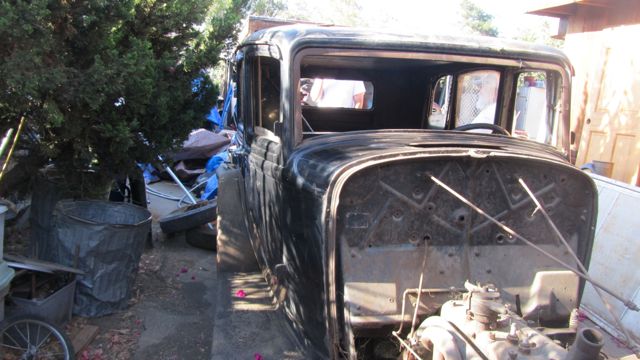 All of the parts were stored inside the car and everything is unmolested save the white vinyl top. 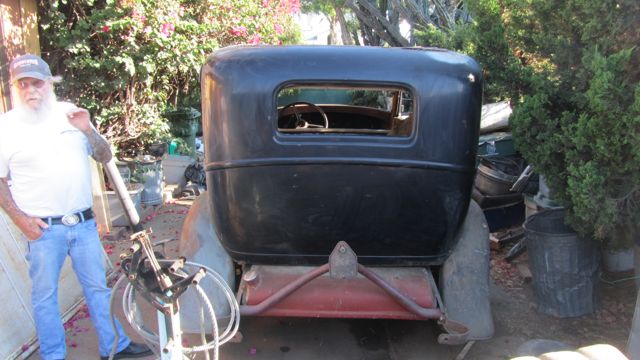 The tank has been boiled out many years ago and primered but appears to be in great shape. All fenders are repairable and solid. 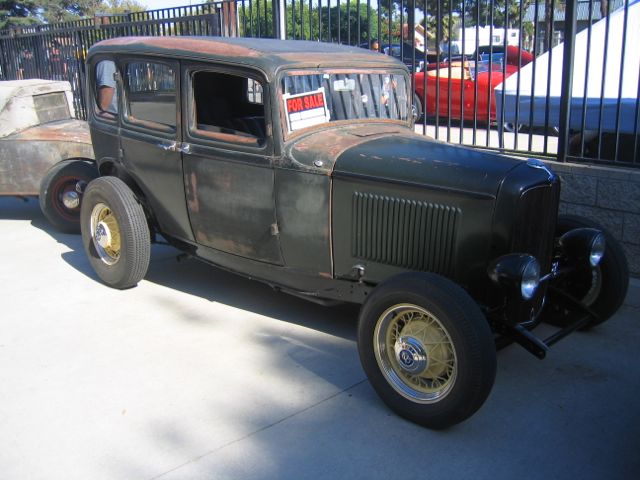 The Kennedy Boys put this one together and sold it to Bob. SBC hooked to the stock driveline makes and instant driver out of these cars. Fenders are optional. Kelsey’s are mandatory. 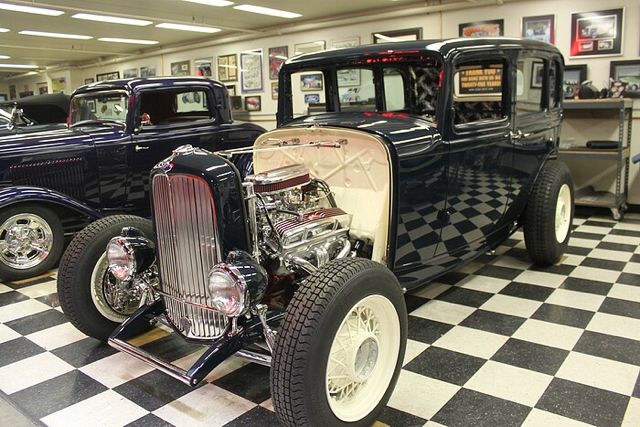 If you must have a high end hiboy, then Roy can build you one like he did for Scott. I do have champagne ideas but have to settle for the beer budget ones and that’s O.K. 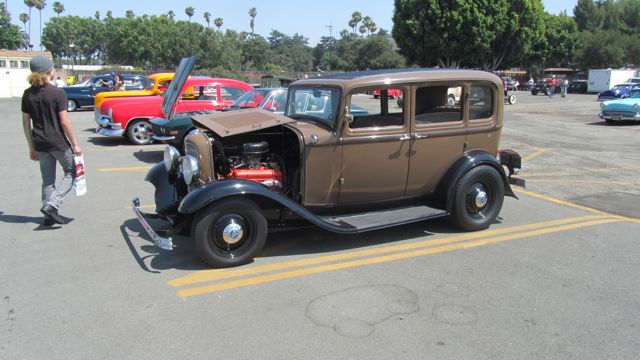 A complete owner built resto-rod example is a nice driver for the family. There is that orange engine again. 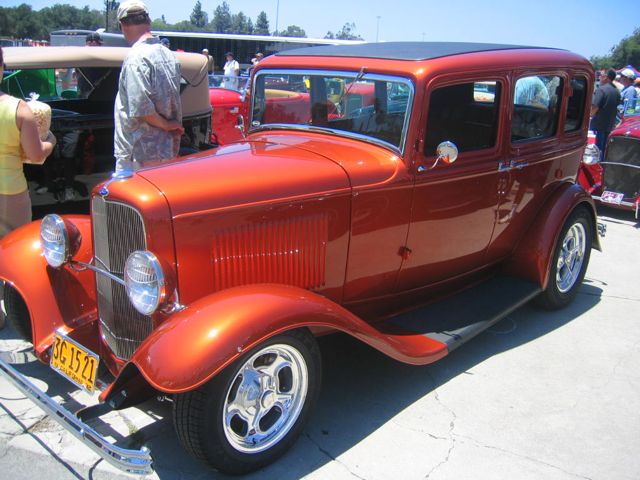 If you are a bucks up guy, then take it to Roy for a real high end build. A full independent suspension makes this one ride perfect. 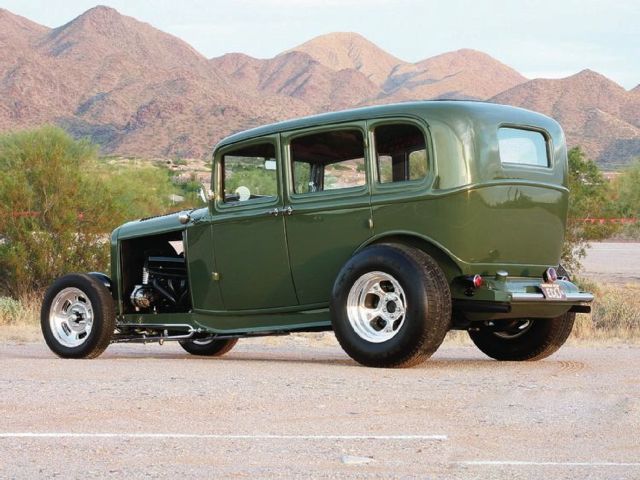 If you have the talent you can build a high end Deuce in your garage. I have seen this one close up and it is very well built. 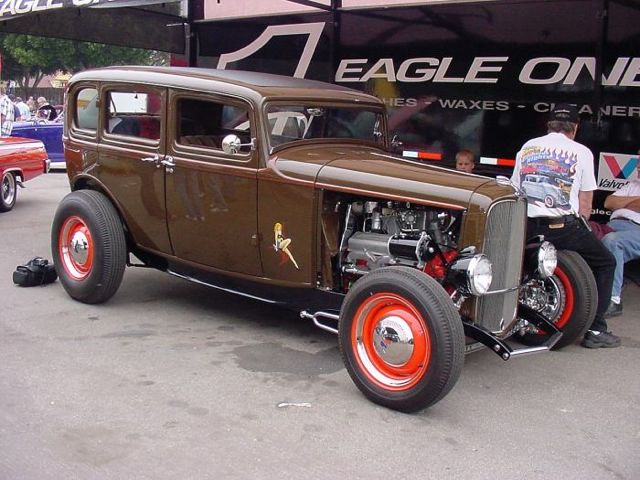 I have always admired Chuck’s chopped (Kennedy Boys) four door sedan with the FI engine. A basic but detailed build and one of the first chopped four doors I saw. Who would build a mor-door?…Chuck did and has many admirers. He also has a stock height tudor as a back up . 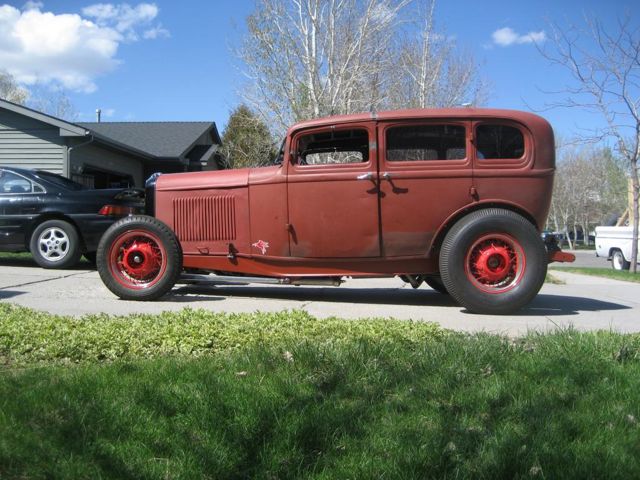 Again, if you have the time and talent you can build your own chopped sedan and have lots of fun driving the streets of your home town. Basic parts and good skills = hot rod. 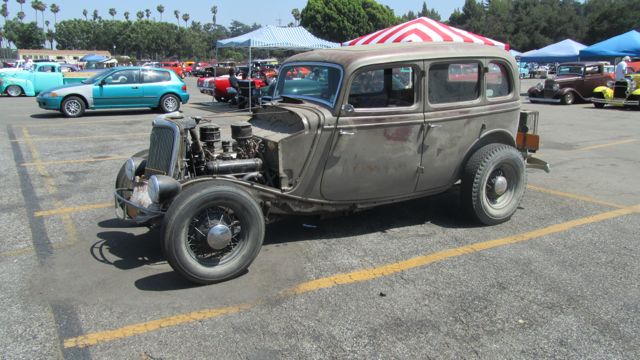 Jake has the four door sedan that goes everywhere. When I last saw it the rear seat was out to make it a trunk. 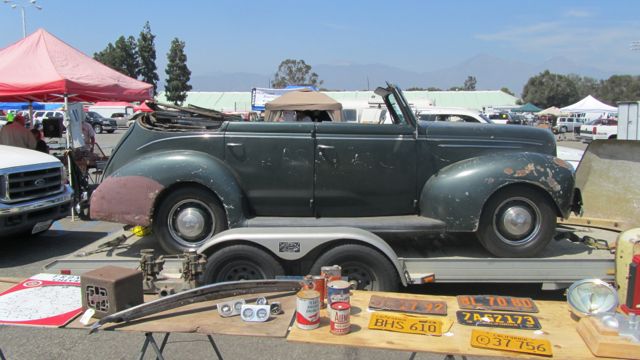 You can have yourself a convertible sedan that Bobby thought would make a nice ride. He is almost done with the build. 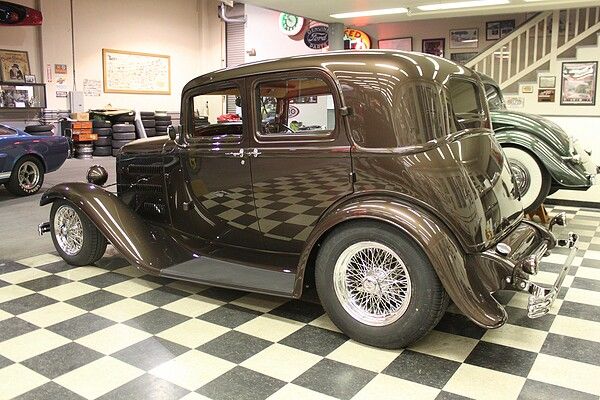 If you can sing and play a guitar you could have Roy build you the best four door ever built. This is a masterpiece in my opinion.