The Petersen Automotive Museum sponsored Deuce Week, held to celebrate the 80th anniversary of the 1932 Ford, will go down in history as a first class event. The entire event, starting with the tours on Wednesday and ending with the fabulous Deuce show on Saturday at the Petersen, will be an adventure I won’t soon forget. I have been attending Deuce Day shows for many years and for the most part they consisted of stationary displays of the American Hot Rod. To see these Deuces driving on the busy LA streets and the owners enjoying themselves really made feel good about the loyalty the owners have for the brand. People came from all over the world to see the show and one man I talked to flew over from Australia which is a long trip for a car show. My thanks to the Petersen and all the staff who made the event possible.

My wife and I arrived early on Saturday to view the Deuces. Photo opportunities are challenging for an amateur photo journalist like myself. The parking structure is very dark and the bright sunny day cast shadows that made clear pictures hard to capture. I need to study up on the correct process. I did manage to take a few clear ones and will share them with you. The real story for the event was not the photos but the cars. While it is difficult to view a Â Deuce with something a little different from usual, there were several examples on display from a full on speedster to a time capsule 3 window in storage since 1959. Lunch from Johnny Rockets was available in the cover car section and provided a needed rest from all the walking. We headed home about 3:00 pm and followed a couple of Deuce roadsters up the beautiful PCH where the sun was beating down on the glistening red roadster ahead of us.

My wife said…we should have one of those for days like today. I have a great wife. 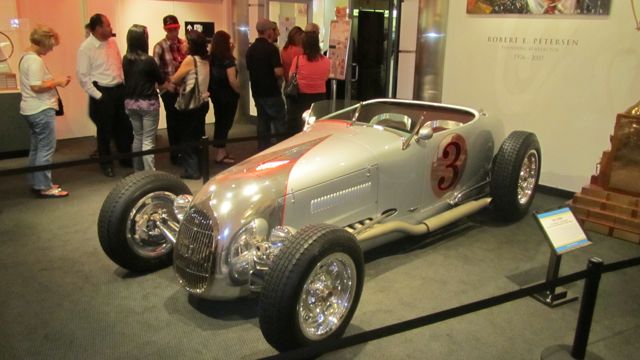 The first roadster you saw when you entered the Museum was this years AMBR owned by Bill Lindig. The line is for Johnny Rockets and was like that all day long. 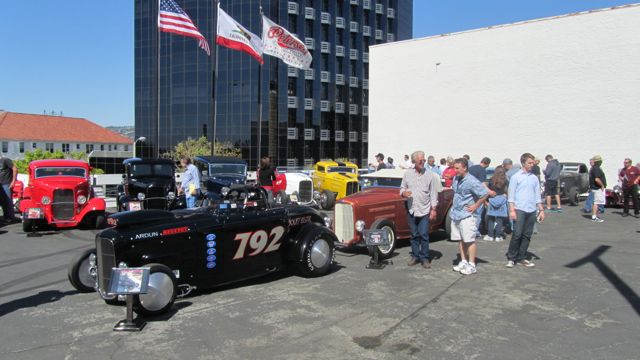 As you exited from the museum to the outside the “Cover Car” section was immediately to your right and featured some former cover car Deuces. They had this display at the 75th also. I enjoyed this section most of the owners were available to discuss their cars. 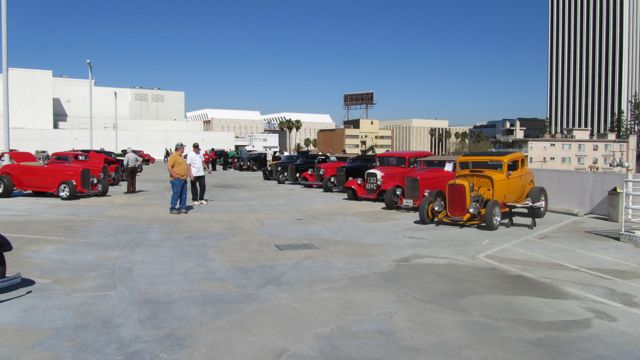 The roof featured more Deuces and provided excellent photo opportunities than the dark shadows in the parking structure. The Deuce 5 window on the right was built by Gene McKinney years ago and was on the cover of Peter Vincent’s first book. 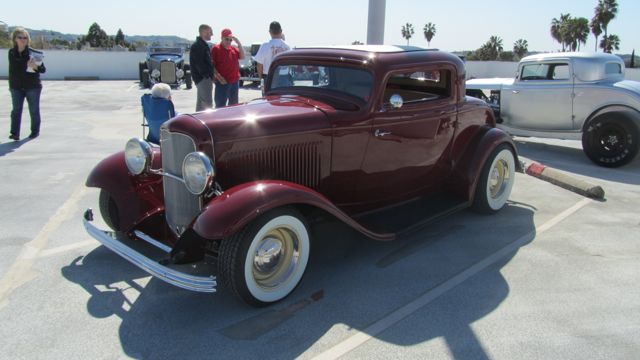 The maroon chopped 3 window from AZ was really nice and caught my eye while walking the perimeter of the parking lot. I did not see a lot of ww tires on the cars. 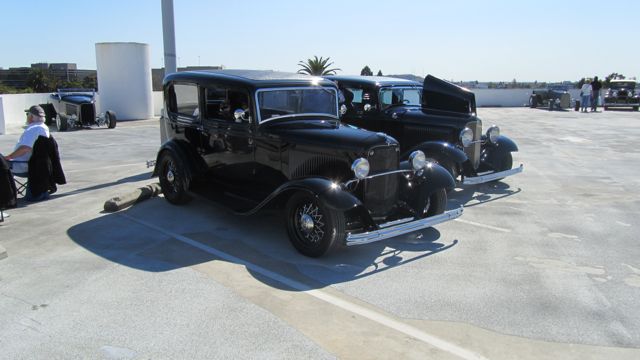 The black wires with chrome spokes really set off this all black tudor. Jane loved the sedan. 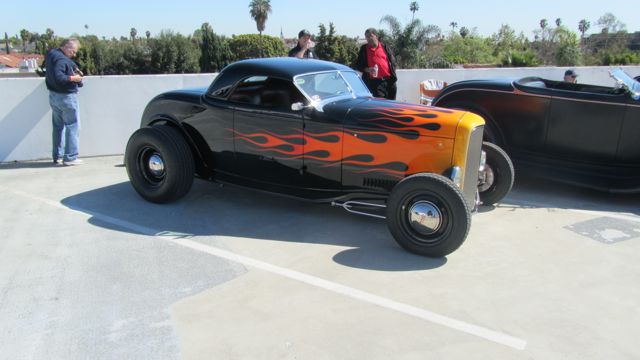 I finally had an opportunity to meet Phil and look at his high end hiboy. The color is green but looks black most of the time. The top is a real work of art. 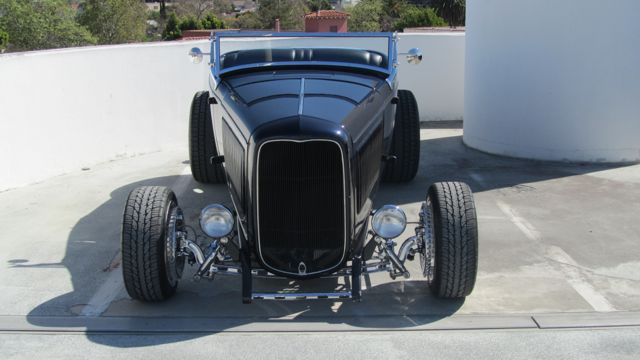 My wife commented that this is the look that you realize is the standard for traditional hiboy’s. I think this car is Bob Bauder’s as he likes the wide tires on the front. The original builder of this car was Rob at CSR in the 80’s. I did not see Bob but there were lots of people at the Petersen. 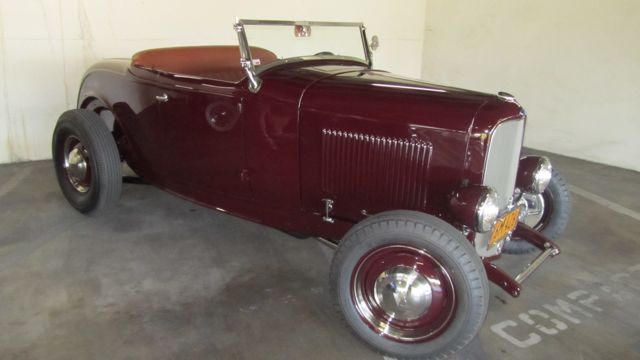 John drove his “Potvin” roadster to the show for us to admire. This was a roommate of Ruby’s for a few years. The car is very, very nice and had a crowd around it most of the time. A flat motor up front, a C-4 in the middle and a Halibrand in the rear. Perfect. 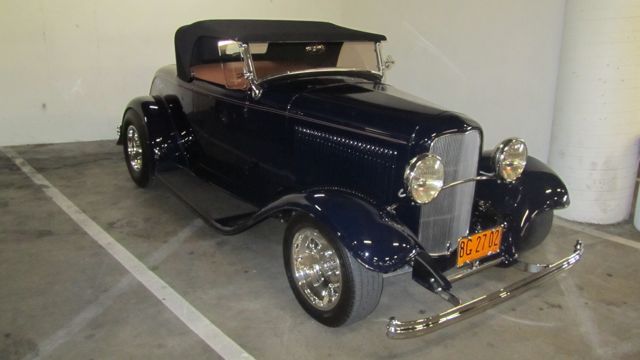 Full fenders look good on a Deuce for a change. The color was blue with tan interior and looked fresh. 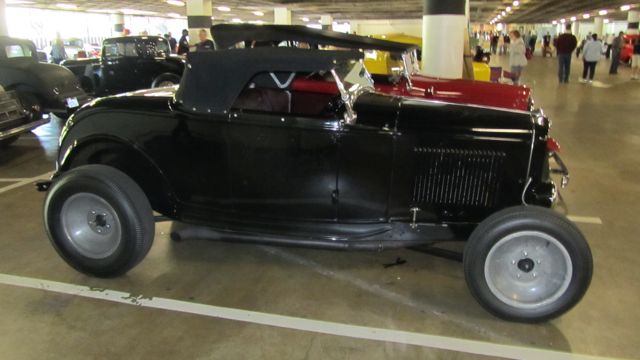 Lots of old time builds were present on the first floor of the parking lot. Smooth Halibrands are really cool. John has lots of good stuff in his garage. 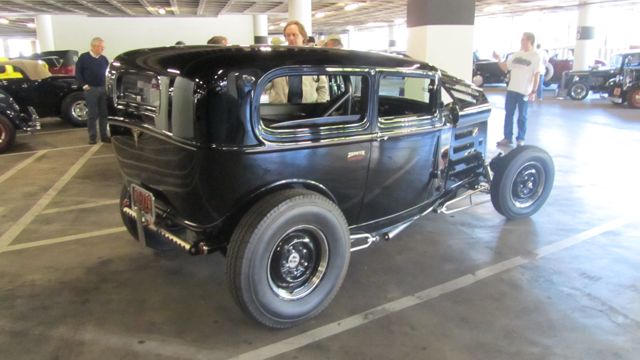 Some owners simply keep the same car and give it a different look every so often. Foley from Reno, changed this one to look like and early 50’s sedan from its past 70’s look. I really liked this one. Note the sun shine coming from the outside. I Â have lots of photos of this one for a future feature. 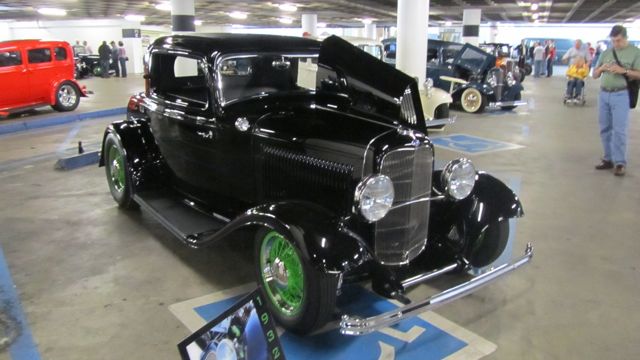 There were more quality 3 windows this year than I could count. Each floor had several to inspect and talk to the owners. Apple green wheels were big in my era. 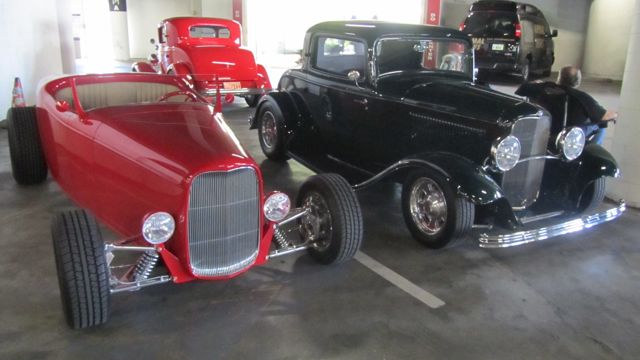 Walt and Gary had two different style of Deuces on the first floor. Walt’s was the first all aluminum car built by Boyd and Gary’s 3 window is green and perfect in every detail. 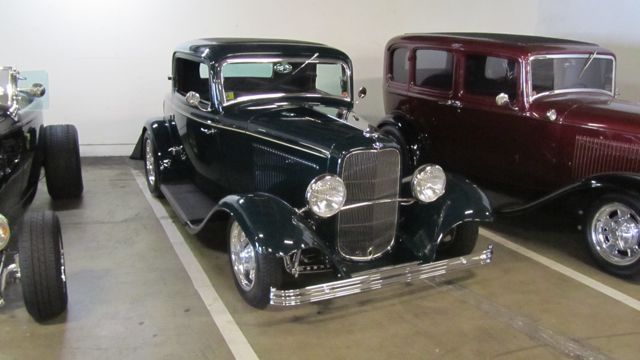 I originally thought this was Gary’s 3 window but it wasn’t. This green beauty was also very nice and detailed. Four doors were everywhere. 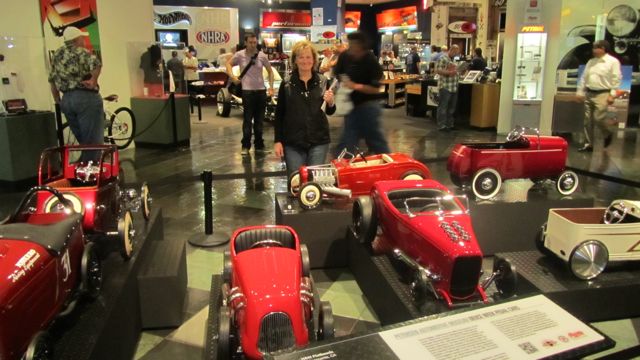 My wife loved the Pedal car Deuces and thought I should build one my new grandson, Syd… Great idea and great wife. We need to keep the flame burning with the youngsters.