San Francisco has long been a favorite place of ours and we continue to find new experiences each time we visit our children on Mother’s Day weekend. This year was special as we were staying with our daughter in her new house and celebrating Mother’s Day with our entire family. It just so happens that she lives about 15 minutes from Roy Brizio’s shop in South San Francisco. My friend George had offered to pick me up in his Deuce coupe for a classy ride to Roy’s 37th annual Shop Party. We made the short trip and found a great parking spot right in front of the shop. Parking is normally a premium but our early arrival paid off. Roy’s staff was busy preparing for the event so we left them alone and headed for some breakfast at the local restaurant. We soon were back looking at the cars and talking to several old friends and meeting some new ones. The crowd was small until after 9:00 am, then the number of cars and spectators grew to his normal turnoutâ€¦packed.

Roy’s layout provides all types of cars on the street and in front of the shop but restricts the back area to roadsters, of which, he has built most of them. The shop is full of his current and past projects all stunning and providing lots of photo opportunities if you can shoot through the crowds. As you know, I love to see the cars under construction and Roy has several. He always has several Deuces and Model 40’s as well as some unique cars, such as a 1937 Cord with all late model suspension. Roy’s talented crew can build about any type of car you want. He had some fine examples of 1932 Lincolns that he had just finished. The phaeton and sedan both were exquisite and clearly displayed the talent of his shop’s capabilities. Roy has several repeat customers such as Eric Clapton, Scott Hawley, John Mumford and many others that continue to build some of the finest hot rods being commissioned today. George and I spent until early afternoon enjoying a wonderful day at the Shop Party and finally headed the little Deuce coupe back to Pacifica.

Congratulations to Roy and his team for another successful Shop Party and I will be sure to make it a priority again next year. 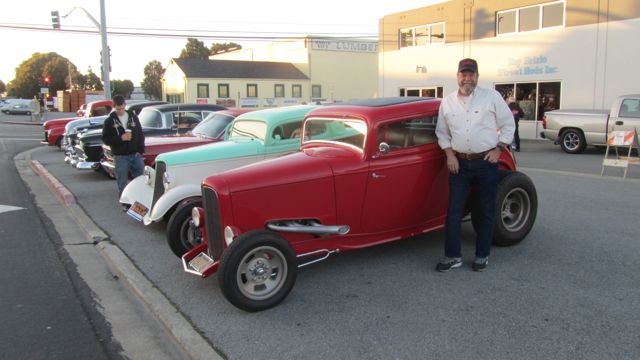 We had a premium parking spot at 6:30 on Saturday. The “patina” colored Halibrands are real magnesium and turn dark in a few days if not polished. George has acquired the Paul Bunyan look with his new beard. 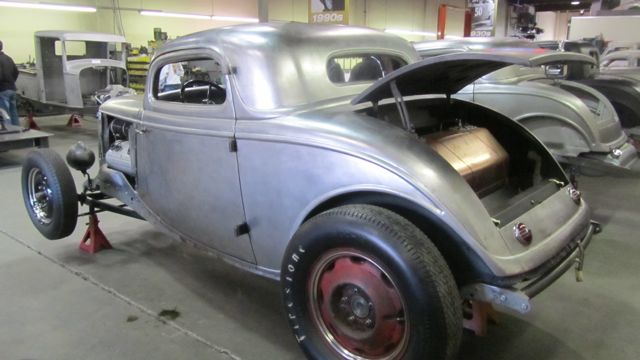 Scott’s 33 3 window was a big hit with most of us. The early build style with lots of period parts made it a favorite of mine. Scott had a roadster and his newly finished Deuce 3 window in the shop for the party. You may have followed this build on the HAMB. 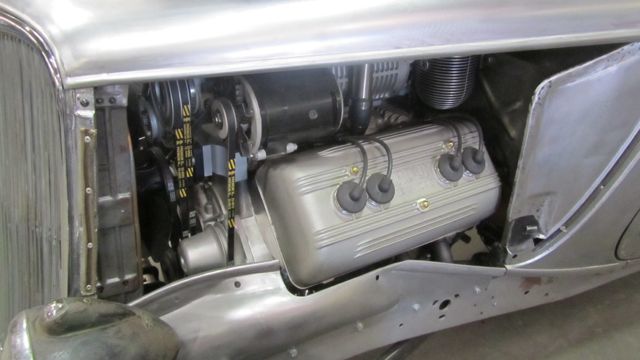 Scott likes Ardun equipped motors and his 33 had and all Aluminum version snuggle in between the frame rails. Nice! 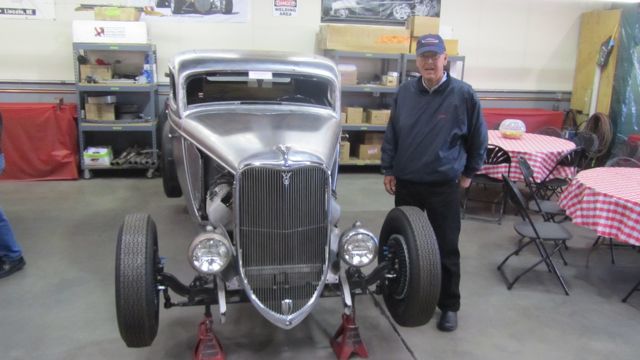 I am just dreaming but I think I would look good in this one. The metal work was very nicely done as was the whole car. 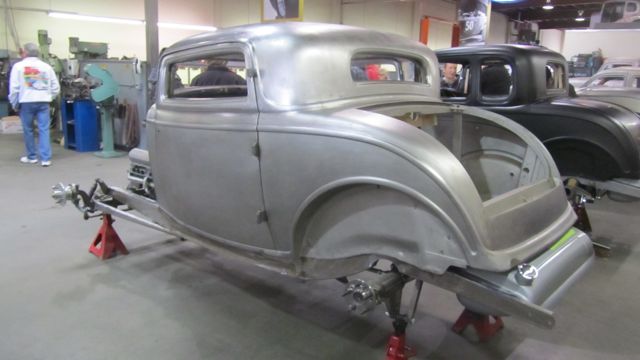 John has another 3 window going together with a Cadillac engine and one of Roy’s trick chassis. The chopped top had the right look as did the front bones. 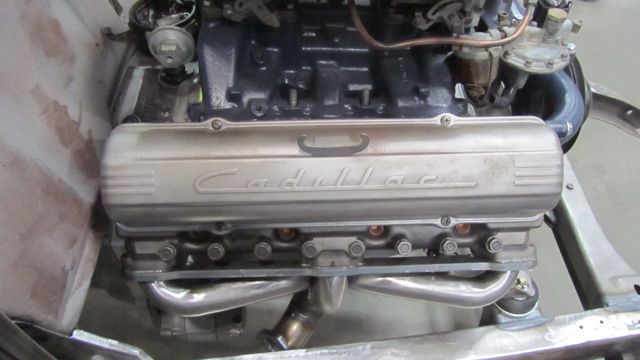 He selected the Caddy for its beauty in an early hot rod. Roy moved the entire original firewall back to accommodate the large engine. 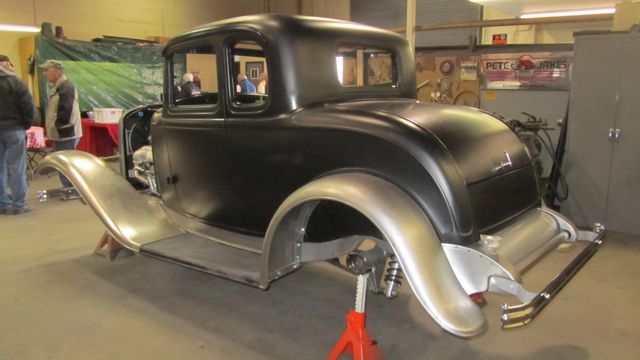 Roy had two UPI 5 windows under construction for customers – One with a Walden Speed Shop chassis and one with his chassis. I can’t find anything wrong with these bodies and they are cheaper than trying to repair a rusty original. 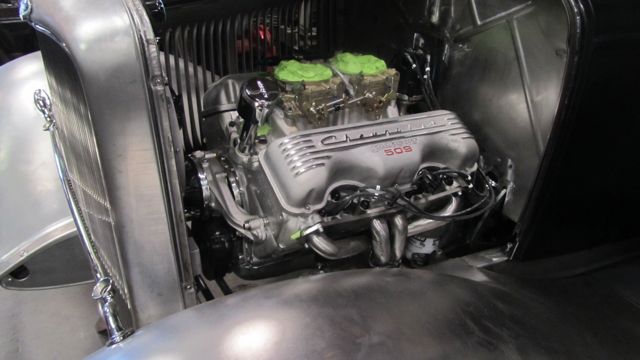 A new “509” was installed and had the look of the “60’s”. Edelbrock heads and dual quads add to the concept. 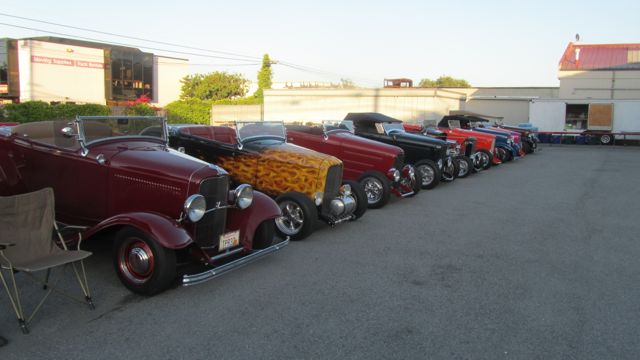 An early shot shows the lineup of Deuces which made Roy famous. Later the lot was overflowing with roadsters. 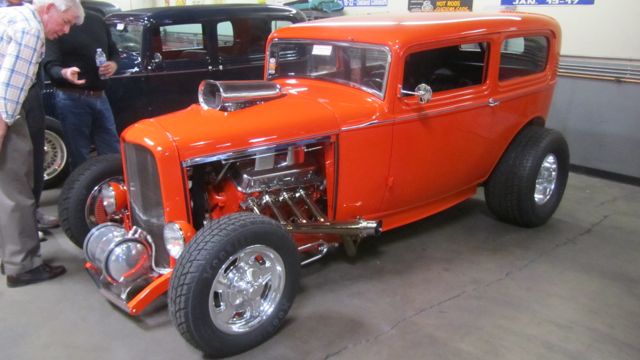 Roy had just finished a freshening of this old classic sedan. It looked brand new which is a tribute to the builder. There is something about an orange sedan that really brings back memories of my youth. 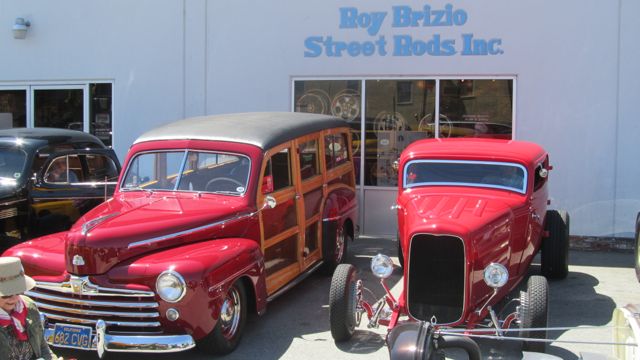 The Walsh brothers parked in the front door area with long time classics. Tom’s woody and his brother’s 3 window have been in their possession for many years. 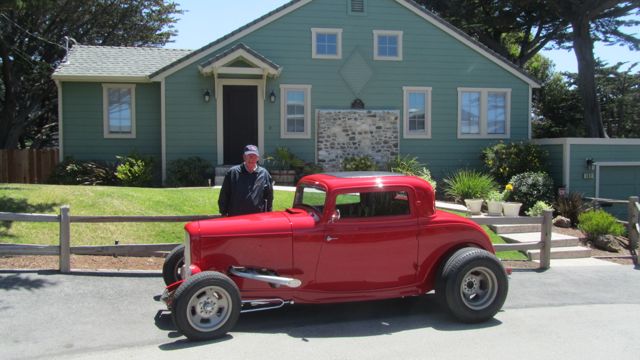 George shot this photo in front of my daughter’s beautiful home overlooking the Pacific ocean. Thanks George for a great day in the Deuce coupe. 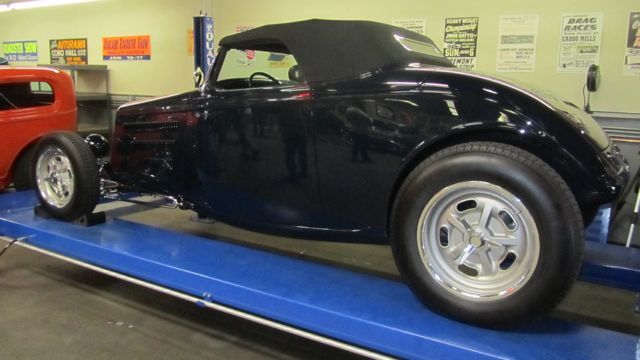 More photos from the Shop Party