The morning air was brisk and I knew it would be cool in the roadster on our way to Santa Barbara. Bob has been fine tuning his new roadster for the maiden voyage but it was still running a little rich on the way to meet the gang at McDonalds. We were the first to arrive and I ordered the coffee while Bob filled up the tank. It wasn’t long before we all headed out for a day in the roadsters. Don lead the way through the back windy roads. The scenery is beautiful as you wind up and down the hills and valleys. The back route is full of agriculture farms and the workers were out in full force this morning. We all had on our jackets as it become cooler as we approached the Pacific ocean.

Little did we know that our leader was taking us to Grant Park which is high above the city of Ventura and provides fantastic views of the ocean and the Santa Cruz Islands. We stopped at the park and took several photos of the cars and the landscape. Bob and I were the last to leave and ended up getting lost as Don was headed up the coast in his roadster. We finally caught up with them but we had to push the new roadster to some untested speeds to do so. Everything worked fine on the car except at stop signs. It seems the idle was not set correctly and the car really vibrated until you gave it some gas. We arrived at our destination and Don had the waitress he wanted and was saving our table. Thanks Don.

After a great lunch and some interesting stories, we headed back home on the freeway while the others took the back way home stopping by Oprah’s house for a tour. She loves Deuces. Â As we proceeded east the weather became hotter and soon the jackets were shed and the t-shirts felt good. Bob commented that he smelled oil and I agreed with him but figured it was the large trucks next to us. The car again ran smoothly and rode like a dream with the full independent front and rear suspension. When we arrived at my house, Â my wife came out to greet us and noticed oil all over the back of the car. Bob was correct, the rear end vent was blowing oil out all over the rear end. I told Bob that my Jaguar rear end did the same thing and I solved the problem by extending the vent tube with hose about 12 inches.

Some days are just plain exciting especially when you are riding in a hot rod, enjoying the scenery and the camaraderie of fellow roadster drivers. Thanks, Bob for inviting me to tag along it was really great. 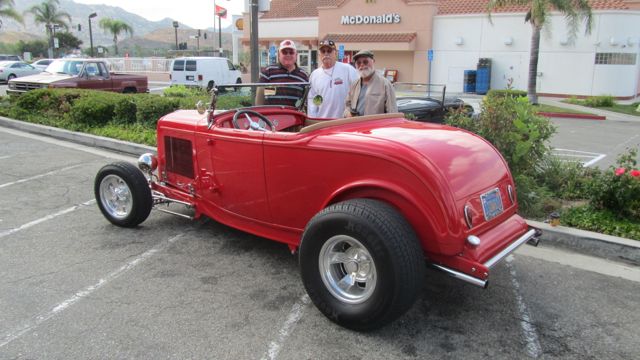 Dick has owned this roadster for over 30 years and has enjoyed driving it as much as he can. There is something about a red roadster. 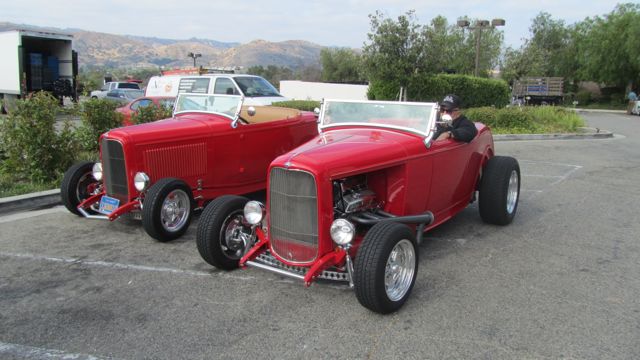 Don drove his red roadster today and was the lead dog. Slow down Don we can’t keep up. Don is 82 years young. 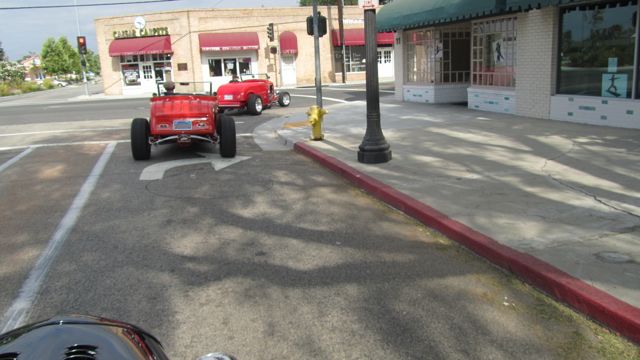 Driving through the city streets can be challenging when trying to stay together. 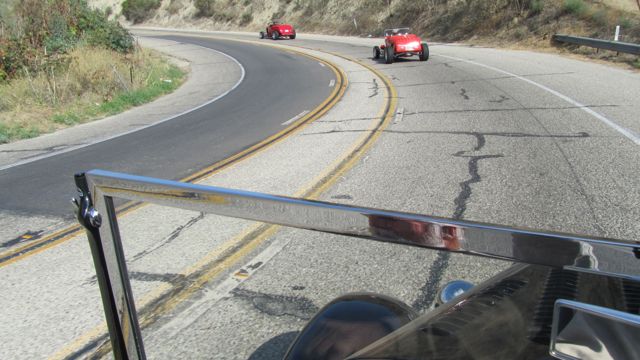 Once in the canyons, the ride becomes lots of fun. Bob was doing the driving as I was taking the photos. 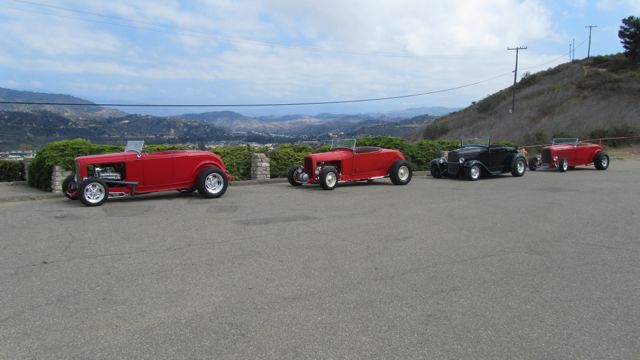 We arrived at Grant Observatory early in the morning but we could see for miles in all directions. Two Deuces and two model A’s made the trip with a 39 Chevy sedan in case of an emergency. 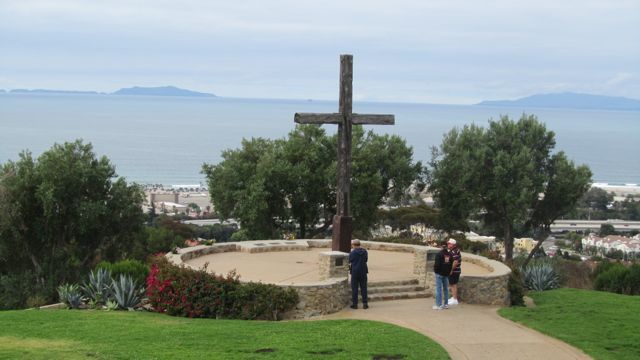 The cross has been in this place for over a 100 years and can be seen for many miles out in the ocean. 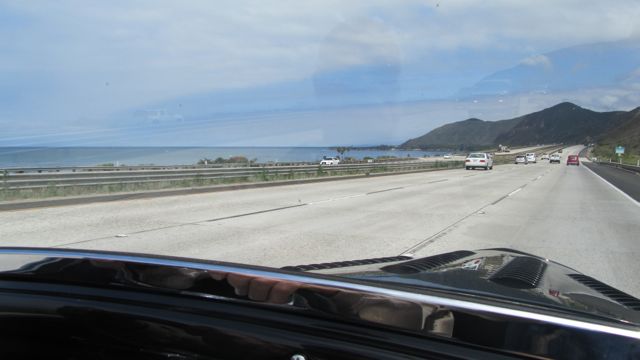 After leaving the back roads we headed up the coast highway to Summerland. Bob put the pedal to the metal and the little roadster roared to life. It doesn’t get any better than this for us old guys. 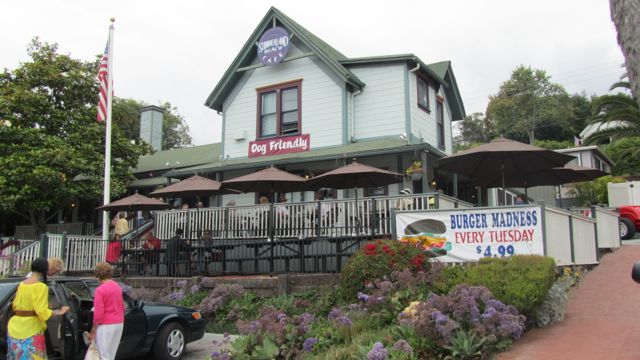 Burger Madness was our reason for driving to the Summerland Ocean Beach Cafe. Our gas bill was $55 but look what we saved on lunch. 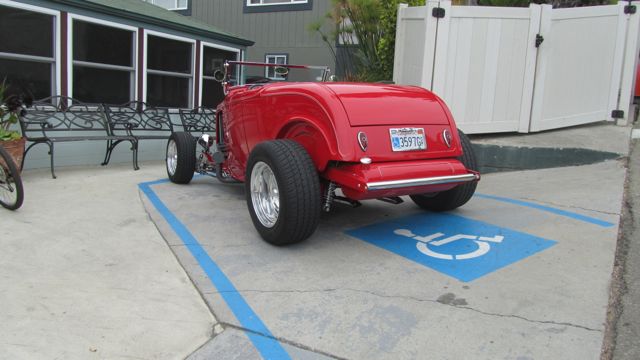 Don has his own parking space at the restaurant. He was the first one to arrive and the last one to leave.

My Ride for Today! 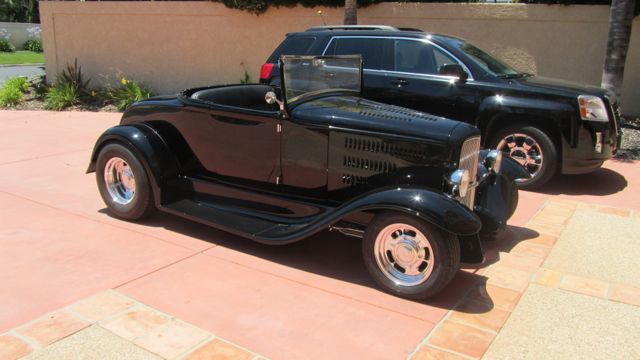 Bob’s new roadster rode like a dream and ran really strong. He has been building this one for 4 years and this was the maiden voyage.