Since Poppy is from the Billet age, 80″s – 90’s,  I thought I would devote today’s blog to that era and my association with the man himself — Boyd Coddington. I arrived in Los Angeles in 1984 and managed our plant in Los Angeles which was a large truck dealership dedicated to sales and service of commercial customers, which was my background. We sponsored some high profile Hot Rodder’s like Lil’John and Chuck Lombardo who I dealt with on a regular basis. I knew of Boyd with his Billet and Smooth empire, but did not meet him for almost a year after I arrived. The Billet aluminum look was present in most Hot Rods being built as well as Lil’John’s line of Billet parts which were displayed in one of our trucks at national events. Pete Chapouris asked me I would be interested in a major sponsorship at the SEMA Show and that is where I became associated with Boyd Coddington. Boyd was a marketeer and knew his way around promotions and public relations. I soon received approval to build a new plant in a more retail friendly environment in Santa Fe Springs which was not far from Boyd’s Stanton shop.

Our new 1988 GMC Truck was introduced and Boyd suggested we do custom trucks at his shop which included lowering, trick paint, engine conversions and even chopped tops. We enjoyed several years of success and I became hooked on Boyds Billet chassis and parts. The traditional bones in my body soon were replaced with Boyds chassis and parts. I built a roadster, inventoried Boyds Wheels as well as several other manufacturer’s Billet parts in our Pro Shop. In fact, we were the first full Pro Shop in Los Angeles. It seems there was no end to the line of parts including full cars made of Billet aluminum. Wheels companies flourished as did Hot Rod shops building Billet parts for resale. The trend has now diminished as SO-CAL brought back the early look with a completely different outlook on what a Hot Rod should look like. The era was very profitable for many of us who caught the wave of Billet and Smooth. But as with any trend, there comes and end. And the manufacturer must adjust or go out of business — which many did.

Custom trucks are no longer being built as the newer models have become harder to customize. Billet parts have almost become a dirty word in the Hot Rod building community and Smooth is definitely out. Hinges, door handles and chrome have come back into play in the industry. Many owners simply replaced the Billet with a painted version or made it disappear in the profile. Steel wheels became popular again as did large diameter tires to match the new wheels sizes. The demise of Billet didn’t happened over night but rather over the past 8-10 years. It is a dirty word that was once the star of the Hot Rod industry. I enjoyed the era and it became part of who I am today. We all like to have pleasant memories and Billet is a term that I can relate to in a positive manner.

The future will certainly produce a new trend that many will follow, but I’m very satisfied with living in the 80 & 90’s and listening to young spectators saying Boyd Who!..Poppy just shines away with her Billet parts and and fully independent Boyd chassis! Thank you Boyd for allowing me to work with you. You are missed by many of us who knew you! I know you are driving your all Billet 29 roadster on the heavenly highways.

One of the best photos of Boyd built Hot Rods was this one taken at the LARS. 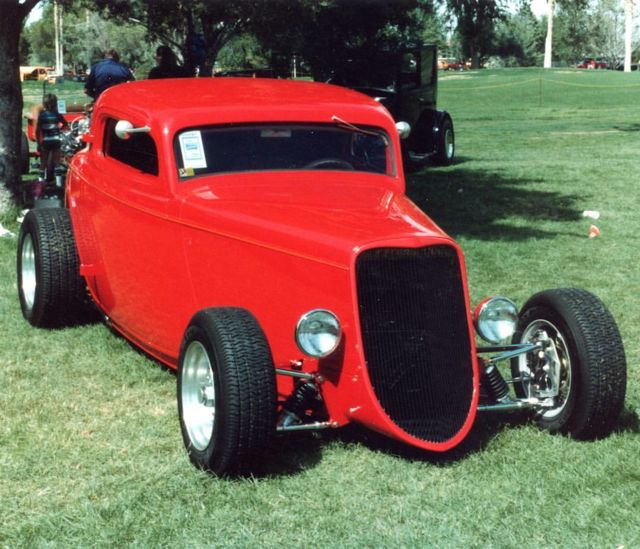 Vern’s coupe was one of the first to start the smoothy trend. 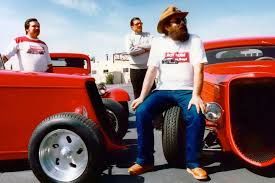 Boyd, Jamie and Vern posed for this famous photo. 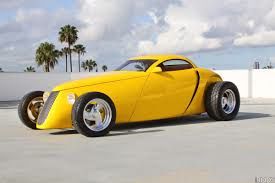 Boyd liked the one-off designs all hand crafted by metal masters he worked with and hired. I hauled the Aluma Coupe to SEMA for him one year.

Larry Murray commissioned Boyd to build him a Tub designed by Thom Taylor for the Oakland Roadster Show which he won. 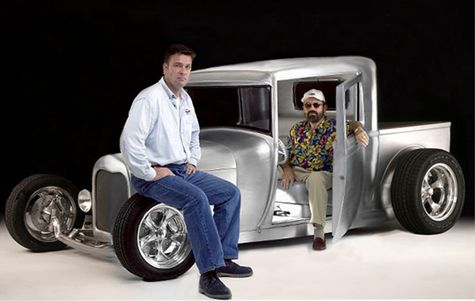 Another all billet aluminum was this trick 29 truck. 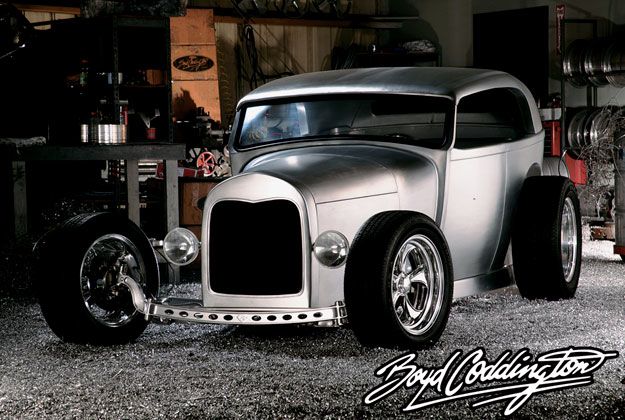 The Aluma Tub was another one-off creation by Boyd. 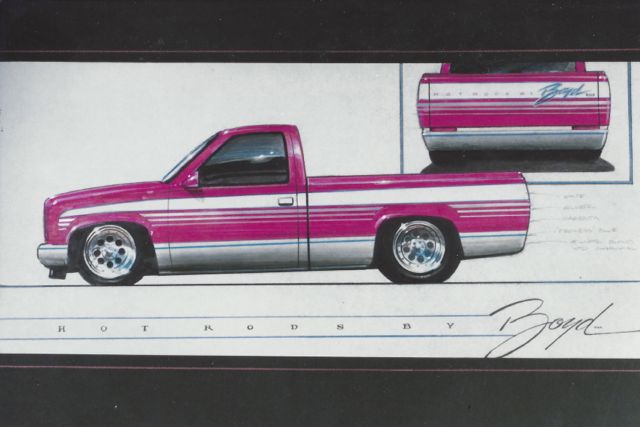 Boyd built this famous GMC for the SEMA show. He always had a drawing of his ideas before he started building. We handed out this postcards at the SEMA Show. 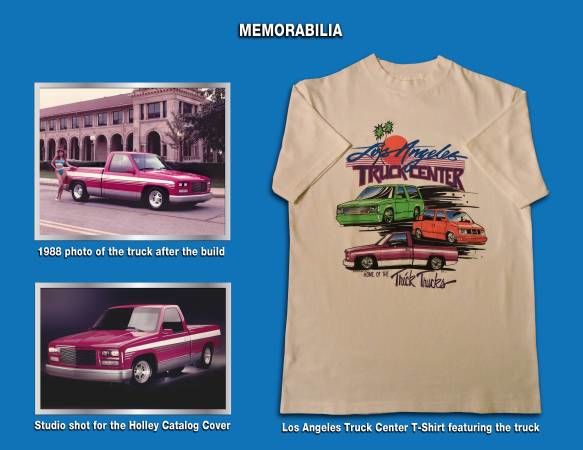 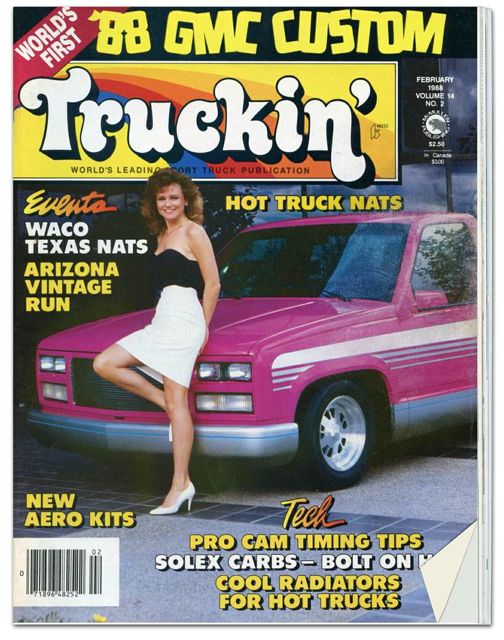 We sold the truck to Jack Pienik in Detroit after the show. Truckin’ gave us a cover and we were off to the races with orders for Boyd Built Trucks, Vans and Jimmy’s. 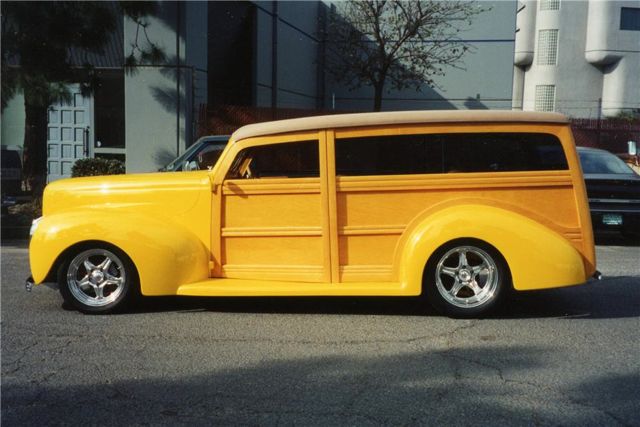 Boyd built this wagon for our Buick dealer and had Doug Carr do the wood on this one-off Woody Wagon. 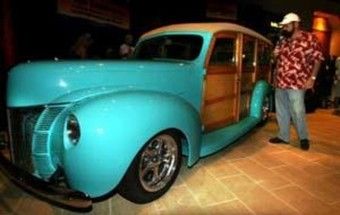 Boyd built several Woodies while I worked with him and Dick. I only remember one being a dropped axle resto-rod for his nephew. 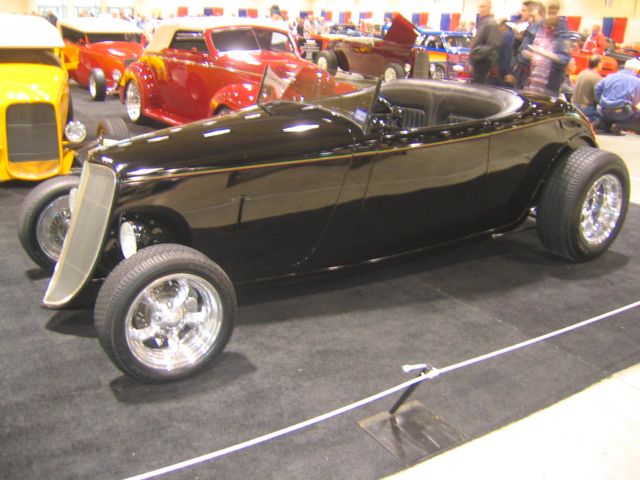 Boyd bought back Jamie’s red roadster and painted it black. 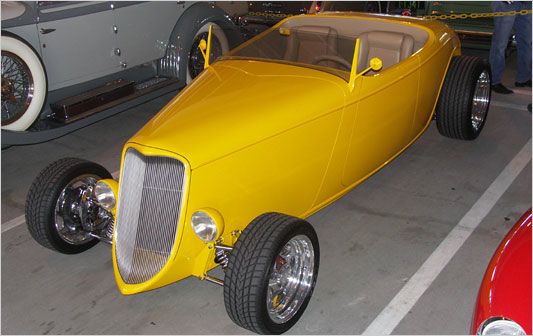 Using a Wescott body he built this yellow roadster which I fell in love with and had the opportunity to drive. 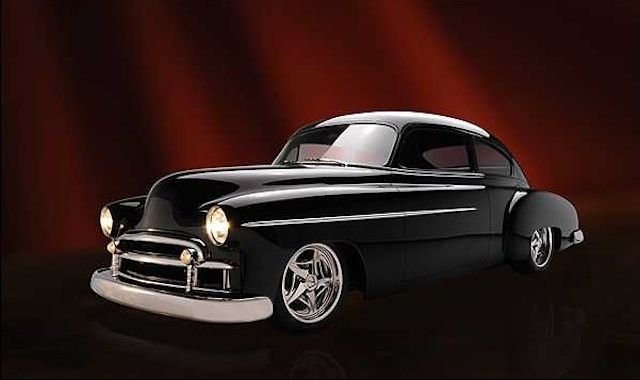 Wes commissioned Boyd to build this Chevrolet for him that started the relationship with Chip Foose. 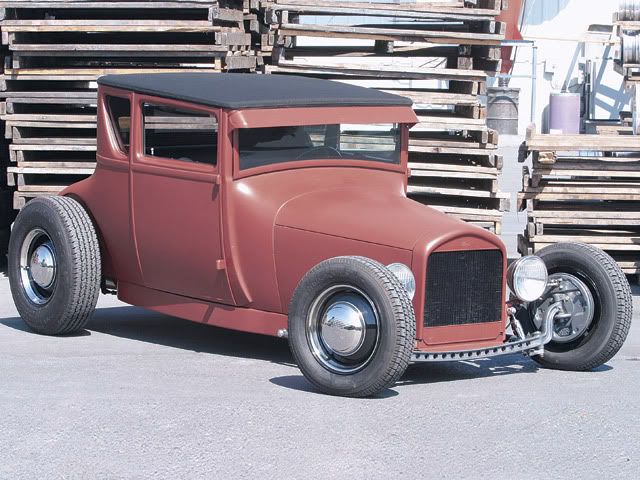 In his TV series he saw the trend changing and built this “Rat Rod!” 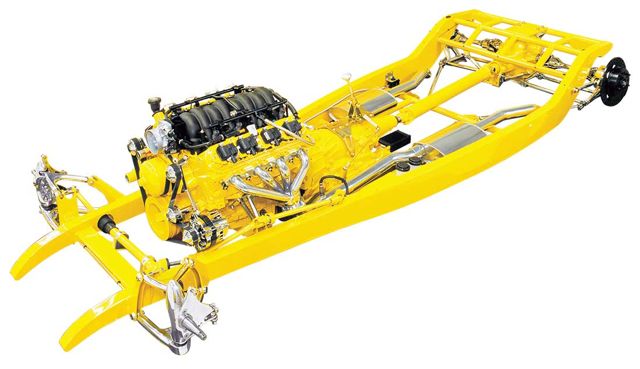 Boyd’s final series of chassis incorporated the LS engines and the full independent suspension he was famous for during his lifespan. Larry was his chassis man who was really talented. 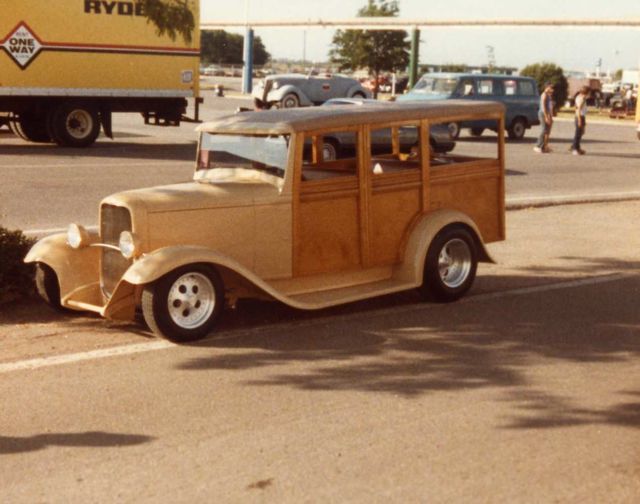 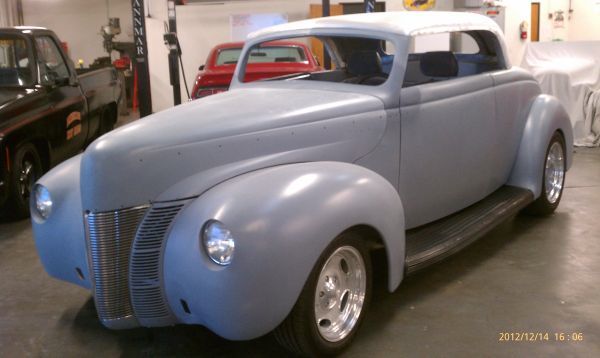 Boyd built several forties and this convertible was one of the last ones never to be finished by him. 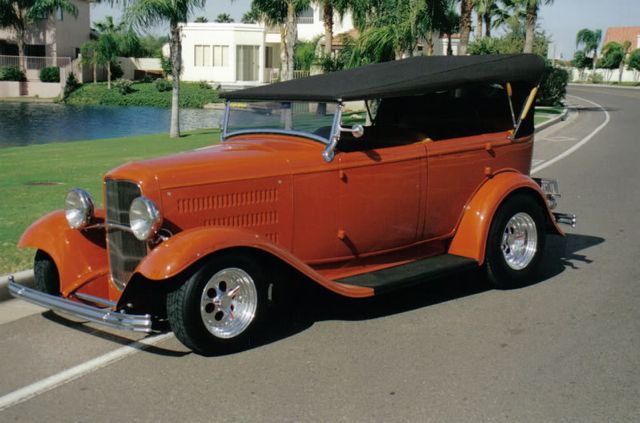 Boyd knew I like Phaetons so he let me drive this one while in his shop. I remember it had a Dan Woods front suspension instead of Boyds. 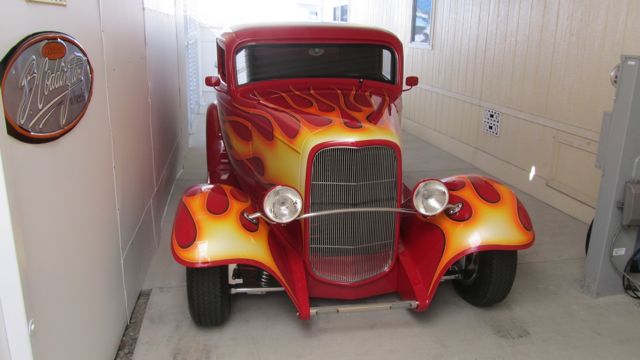 I sold my coupe to Boyd and he finished it without the flames but it was later flamed when Walt purchased it. It has moved on to a new owner now. 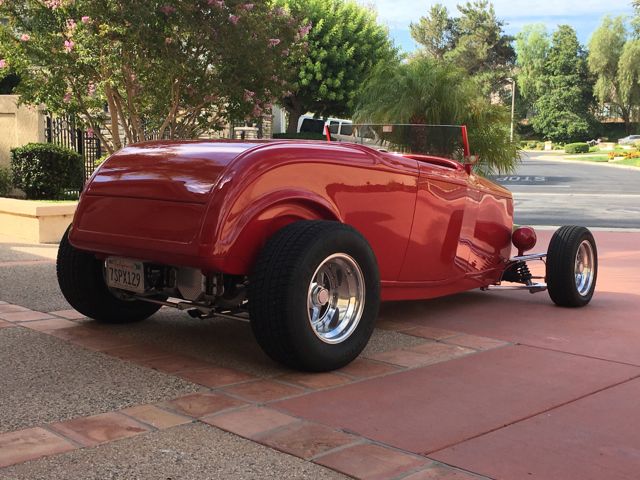 Boyd built Poppy for Larry Murray to compete in the Oakland Roadster Show in late 80’s. The car is 30 years old and still drives and handles like a Boyd car always did…smooth and low he used to tell me. He built several just like this one in different colors including mine.